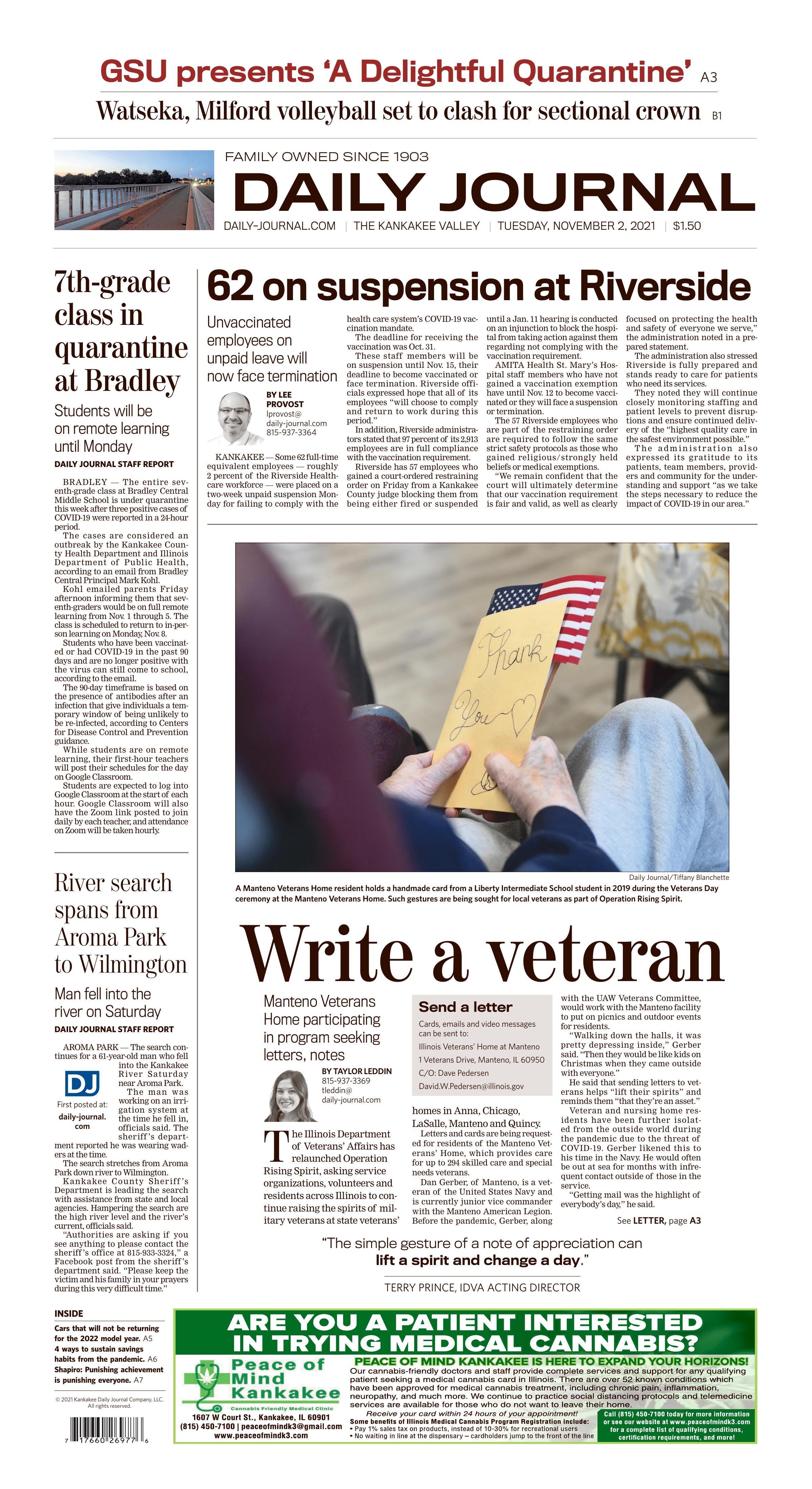 KANKAKEE — Some 62 full-time equivalent employees — roughly 2 percent of the Riverside Healthcare workforce — were placed on a two-week unpaid suspension Monday for failing to comply with the health care system’s COVID-19 vaccination mandate.

The deadline for receiving the vaccination was Oct. 31.

These staff members will be on suspension until Nov. 15, their deadline to become vaccinated or face termination. Riverside officials expressed hope that all of its employees “will choose to comply and return to work during this period.”

In addition, Riverside administrators stated that 97 percent of its 2,913 employees are in full compliance with the vaccination requirement.

Riverside has 57 employees who gained a court-ordered restraining order on Friday from a Kankakee County judge blocking them from being either fired or suspended until a Jan. 11 hearing is conducted on an injunction to block the hospital from taking action against them regarding not complying with the vaccination requirement.

AMITA Health St. Mary’s Hospital staff members who have not gained a vaccination exemption have until Nov. 12 to become vaccinated or they will face a suspension or termination.

The 57 Riverside employees who are part of the restraining order are required to follow the same strict safety protocols as those who gained religious/strongly held beliefs or medical exemptions.

“We remain confident that the court will ultimately determine that our vaccination requirement is fair and valid, as well as clearly focused on protecting the health and safety of everyone we serve,” the administration noted in a prepared statement.

The administration also stressed Riverside is fully prepared and stands ready to care for patients who need its services.

They noted they will continue closely monitoring staffing and patient levels to prevent disruptions and ensure continued delivery of the “highest quality care in the safest environment possible.”

The administration also expressed its gratitude to its patients, team members, providers and community for the understanding and support “as we take the steps necessary to reduce the impact of COVID-19 in our area.”

EDITOR'S NOTE: Dave Pederson is no longer affiliated with this program. Letters may be mailed to the Manteno Veterans' Home, or dropped off at the Manteno American Legion (see sidebar for address details).

Letters and cards are being requested for residents of the Manteno Veterans’ Home, which provides care for up to 294 skilled care and special needs veterans.

Dan Gerber, of Manteno, is a veteran of the United States Navy and is currently junior vice commander with the Manteno American Legion. Before the pandemic, Gerber, along with the UAW Veterans Committee, would work with the Manteno facility to put on picnics and outdoor events for residents.

“Walking down the halls, it was pretty depressing inside,” Gerber said. “Then they would be like kids on Christmas when they came outside with everyone.”

He said that sending letters to veterans helps “lift their spirits” and reminds them “that they’re an asset.”

Veteran and nursing home residents have been further isolated from the outside world during the pandemic due to the threat of COVID-19. Gerber likened this to his time in the Navy. He would often be out at sea for months with infrequent contact outside of those in the service.

“Getting mail was the highlight of everybody’s day,” he said.

He said that even though they were fairly isolated in the ocean, they were at least kept busy with drills and tasks. That is often something missing in a veterans’ home.

“I know they have activities, but it’s not the same [with keeping busy],” he said. “So they would really get overjoyed when they get cards or letters.”

Gerber is currently working on organizing the annual Military Warriors Veterans Day Run to School, starting at 7:20 a.m. Nov. 11 at Heritage Park in Manteno. This is an event where veterans can come together on a special day.

“We even have older guys in their 70s and 80s riding along in battle cruisers during the run,” he said, noting that community support is huge when one is in the service or looking to join.

“The support let me know I was doing the right thing [to enlist],” he said.

For more information on the race and to register, email Gerber at gerb959@comcast.net.

“Operation Rising Spirit is an effort to lift our veterans’ morale during the pandemic when it has been difficult to be isolated, away from families and dealing with the uncertainty of COVID-19,” IDVA acting director Terry Prince said in a news release.

“The simple gesture of a note of appreciation can lift a spirit and change a day.”

Cards can be sent to:

• Letters also may be dropped off at the Manteno American Legion, 117 N Walnut St., Manteno.

"The simple gesture of a note of appreciation can lift a spirit and change a day."

Editor's Note: This story was updated to correct the status of the seventh grade class. Students are remote learning this week.

BRADLEY — The entire seventh-grade class at Bradley Central Middle School is remote learning this week after three positive cases of COVID-19 were reported in a 24-hour period.

The cases are considered an outbreak by the Kankakee County Health Department and Illinois Department of Public Health, according to an email from Bradley Central Principal Mark Kohl.

Kohl emailed parents Friday afternoon informing them that seventh-graders would be on full remote learning from Nov. 1 through 5. The class is scheduled to return to in-person learning on Monday, Nov. 8.

Students who have been vaccinated or had COVID-19 in the past 90 days and are no longer positive with the virus can still come to school, according to the email.

The 90-day timeframe is based on the presence of antibodies after an infection that give individuals a temporary window of being unlikely to be re-infected, according to Centers for Disease Control and Prevention guidance.

While students are on remote learning, their first-hour teachers will post their schedules for the day on Google Classroom.

Students are expected to log into Google Classroom at the start of each hour. Google Classroom will also have the Zoom link posted to join daily by each teacher, and attendance on Zoom will be taken hourly.

AROMA PARK — The search continues for a 61-year-old man who fell into the Kankakee River Saturday near Aroma Park.

The man was working on an irrigation system at the time he fell in, officials said. The sheriff’s department reported he was wearing waders at the time.

The search stretches from Aroma Park down river to Wilmington.

Kankakee County Sheriff’s Department is leading the search with assistance from state and local agencies. Hampering the search are the high river level and the river’s current, officials said.

“Authorities are asking if you see anything to please contact the sheriff’s office at 815-933-3324,” a Facebook post from the sheriff’s department said. “Please keep the victim and his family in your prayers during this very difficult time.”