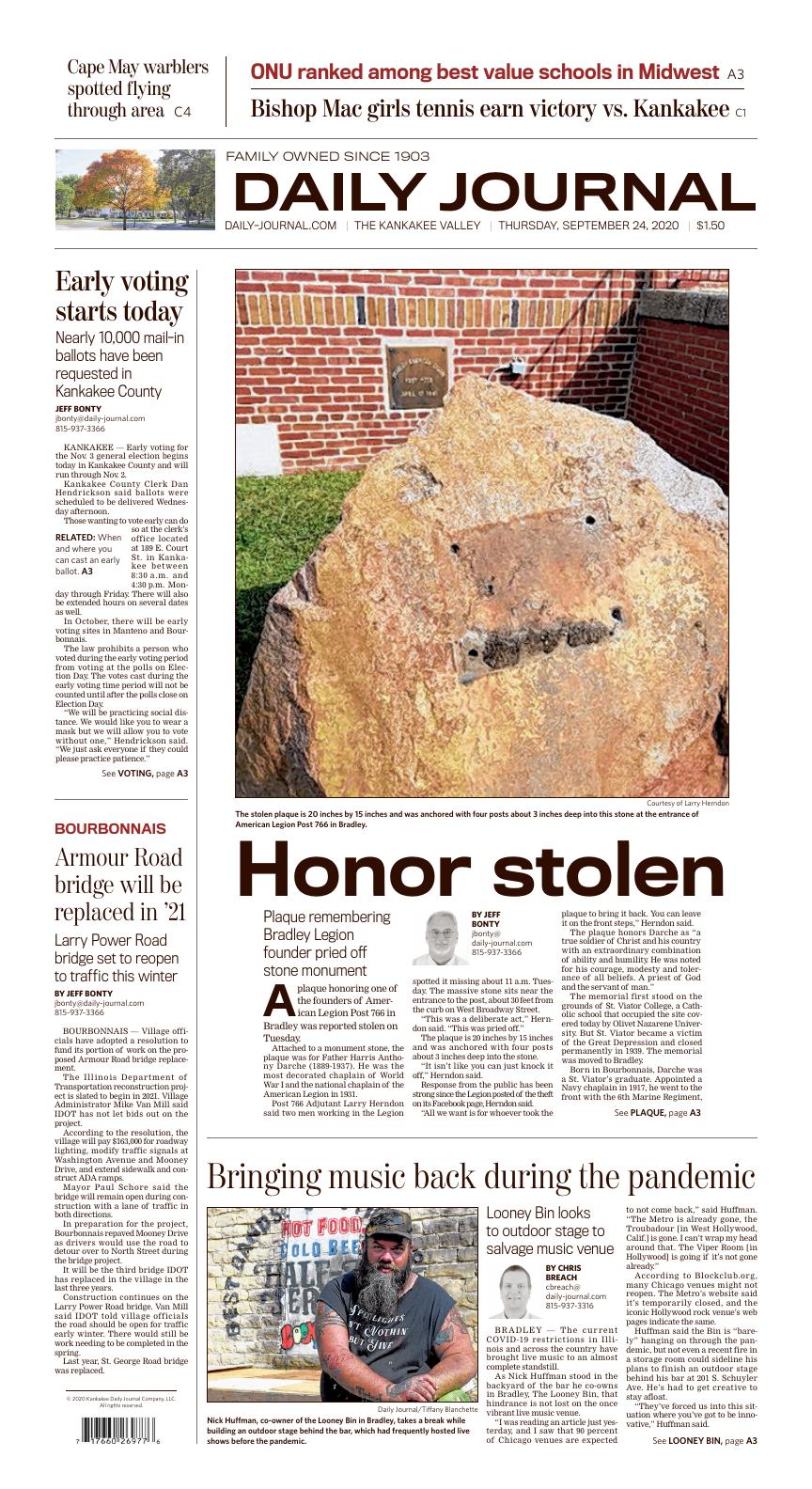 This is the plaque that was pried off the memorial stone from Bradley American Legion Post 766.

The stolen plaque is 20 inches by 15 inches and was anchored with four posts about 3 inches deep into this stone at the entrance of American Legion Post 766 in Bradley.

BRADLEY — A plaque honoring one of the founders of American Legion Post 766 in Bradley was reported stolen on Tuesday.

Attached to a monument stone, the plaque was for Father Harris Anthony Darche (1889-1937). He was the most decorated chaplain of World War I and the national chaplain of the American Legion in 1931.

Post 766 Adjutant Larry Herndon said two men working in the Legion spotted it missing about 11 a.m. Tuesday. The massive stone sits near the entrance to the post, about 30 feet from the curb on West Broadway Street.

“This was a deliberate act,” Herndon said. “This was pried off.”

The plaque is 20 inches by 15 inches and was anchored with four posts about 3 inches deep into the stone.

“It isn’t like you can just knock it off,” Herndon said.

Response from the public has been strong since the Legion posted of the theft on its Facebook page, Herndon said.

“All we want is for whoever took the plaque to bring it back. You can leave it on the front steps,” Herndon said.

The plaque honors Darche as “a true soldier of Christ and his country with an extraordinary combination of ability and humility. He was noted for his courage, modesty and tolerance of all beliefs. A priest of God and the servant of man.”

The memorial first stood on the grounds of St. Viator College, a Catholic school that occupied the site covered today by Olivet Nazarene University. But St. Viator became a victim of the Great Depression and closed permanently in 1939. The memorial was moved to Bradley.

Born in Bourbonnais, Darche was a St. Viator’s graduate. Appointed a Navy chaplain in 1917, he went to the front with the 6th Marine Regiment, serving at Chateau Thierry, the Meuse Argonne and Belleau Wood.

He survived a mustard gas attack. Twice German shells killed all the men around him, but miraculously, he survived. He was reported dead to his sister. All the time, he went about the business of burying American dead, marking their graves and administering the last rites.

Awarded the Navy Cross, the Croix de Guerre and the Legion of Honor, he returned home to help found the American Legion.

Appointed pastor at Bradley St. Joseph’s Catholic Church, he was a popular and successful Catholic Youth Organization baseball coach. Father Darche was not above praying the rosary for a Bradley base hit.

His death was caused by a hemorrhage attributed to the lingering effect of that 20-year-old gas attack.

Born in Bourbonnais, Harris Anthony Darche was a St. Viator College graduate. Appointed a Navy chaplain in 1917, he went to the front with the 6th Marine Regiment, serving at Chateau Thierry, the Meuse Argonne and Belleau Wood.

He survived a mustard gas attack. Twice German shells killed all the men around him, but miraculously, he survived. He was reported dead to his sister. All the time, he went about the business of burying American dead, marking their graves and administering the last rites.

Awarded the Navy Cross, the Croix de Guerre and the Legion of Honor, he returned home to help found the American Legion.

Appointed pastor at Bradley St. Joseph’s Catholic Church, he was a popular and successful Catholic Youth Organization baseball coach. Father Darche was not above praying the rosary for a Bradley base hit.

His death was caused by a hemorrhage attributed to the lingering effect of that 20-year-old gas attack.

Nick Huffman, co-owner of the Looney Bin in Bradley, takes a break while building an outdoor stage behind the bar, which had frequently hosted live shows before the pandemic.

BRADLEY — The current COVID-19 restrictions in Illinois and across the country have brought live music to an almost complete standstill.

As Nick Huffman stood in the backyard of the bar he co-owns in Bradley, The Looney Bin, that hindrance is not lost on the once vibrant live music venue.

“I was reading an article just yesterday, and I saw that 90 percent of Chicago venues are expected to not come back,” said Huffman. “The Metro is already gone, the Troubadour [in West Hollywood, Calif.] is gone. I can’t wrap my head around that.”

According to Blockclub.org, many Chicago venues might not reopen. The Metro’s website said it’s temporarily closed, and the iconic Hollywood rock venue’s web pages indicate the same.

Huffman said the Bin is “barely” hanging on through the pandemic, but not even a recent fire in a storage room could sideline his plans to finish an outdoor stage behind his bar at 201 S. Schuyler Ave. He’s had to get creative to stay afloat.

“They’ve forced us into this situation where you’ve got to be innovative,” Huffman said.

Current restrictions limit bars to a 50% capacity, which Huffman said would cause the venue to lose money on music shows. He’s now putting the finishing touches on his outdoor stage.

“The mayor and I were talking, and he suggested it,” Huffman said. “I looked at him like he was crazy. I’ve been trying to do this for the last nine years, and they [previous administration] had fought me tooth and nail. He said, ‘Well, times are different now, and we need to adapt so let’s do right by you.'

“He put the idea in my head because I wouldn’t have tried again, considering all the times I’ve been told no. … He’s had our back big time through this whole thing.”

The village is also helping Huffman obtain a grant that will help pay for some of the utilities and rent. Watson sent someone from the village office to the Looney Bin with the paperwork.

“Now what kind of mayor proactively does that? … We’d have never known about it otherwise,” Huffman said. “He’s been a huge help for us.”

The rudimentary stage is being build out of some donated wood crates and lumber that was already on site. Huffman has received help from friends Betsy Kuypers and Brittany Huckabee.

“He’s just one of my best friends,” said Kuypers, who lives in Peotone and operates a petting zoo. “I have a little farm, and I get all these crates for free so I thought I would just drop them off here.”

Huffman painted the bar’s logo on the adjoining wall that’s the backdrop for the outdoor stage, and Noble Tattooing in Bradley is going to add a mural on the wall.

“The idea is to make it look like an apartment building,” he said.

They’re going to repurpose some iron-framed windows from the original building, which was the old home of the North Kankakee Electric Rail and Light Co., with possibly rock ‘n’ roll scenes painted on them.

There will also be a 24-foot by 12-foot screen hung behind the stage that will allow for a video display. Huffman said he’s going to mimic what he and Scott Lucas, vocalist for Chicago’s Local H, collaborated on for drive-in theater music concerts in June in Gibson City.

Huffman is also looking into putting another video screen opposite the band on an nearby billboard. He’s also working on the sound set-up.

“There’s actually a lot of simple Bluetooth stuff that puts out a lot of sound,” he said. “I’m just not sold on the idea because I’m old school in my head, but it might make more sense. We’re going to look into it, something that’s weather-proof.”

The Bin is supposed to host a small music show on Saturday by local band Bad Influence inside, but Huffman said he hasn’t got the OK yet due to the smoke damage from the fire.

Having shows outdoors allows for more people to attend the concert.

“Back here, even with the social distance restrictions, we should be able to have a decent show anyway as opposed to inside, where it’s just impossible,” Huffman said.

Election judge Elaine Burns works the ballot machine Tuesday at the Kankakee County Health Department precinct in Kankakee. Local election officials pushed early voting as a means to curb exposure to the coronavirus at the polls.

KANKAKEE — Early voting for the Nov. 3 general election begins today in Kankakee County and will run through Nov. 2.

Those wanting to vote early can do so at the clerk’s office located at 189 E. Court St. in Kankakee between 8:30 a.m. and 4:30 p.m. Monday through Friday. There will also be extended hours on several dates as well.

In October, there will be early voting sites in Manteno and Bourbonnais.

“We will be practicing social distance. We would like you to wear a mask but we will allow you to vote without one,” Hendrickson said. “We just ask everyone if they could please practice patience.”

Hendrickson said voters can use their own black pen and hand sanitizer will be available but only after casting a ballot. In the March primary, polling places around the state reported ballots that came in contact with hand sanitizer caused electronic ballot counters to malfunction.

“[Today] may be a bit crazy but that is the world we live in,” Hendrickson said. “If we have a big turnout [today] or there are just six people, we will be ready.”

There are currently 67,406 registered voters in the county.

Early voting for Iroquois County registered voters will be held at the County Clerk’s Office, 1001 E. Grant, Watseka from today until Nov. 2. Voting is available from 8:30 a.m. to 4:30 p.m. Monday through Friday and from 8:30 a.m. to noon Saturday, Oct. 31. This early voting site serves all 37 precincts.

“We just ask everyone if they could please practice patience.”

A 4-mile stretch of U.S. Route 45/52 — from north of West Court Street in Kankakee to north of Armour Road in Bourbonnais.

BOURBONNAIS — Village officials have adopted a resolution to fund its portion of work on the proposed Armour Road bridge replacement.

The Illinois Department of Transportation reconstruction project is slated to begin in 2021. Village Administrator Mike Van Mill said IDOT has not let bids out on the project.

According to the resolution, the village will pay $163,000 for roadway lighting, modify traffic signals at Washington Avenue and Mooney Drive, and extend sidewalk and construct ADA ramps.

Mayor Paul Schore said the bridge will remain open during construction with a lane of traffic in both directions.

In preparation for the project, Bourbonnais repaved Mooney Drive as drivers would use the road to detour over to North Street during the bridge project.

It will be the third bridge IDOT has replaced in the village in the last three years.

Construction continues on the Larry Power Road bridge. Van Mill said IDOT told village officials the road should be open for traffic early winter. There would still be work needing to be completed in the spring. 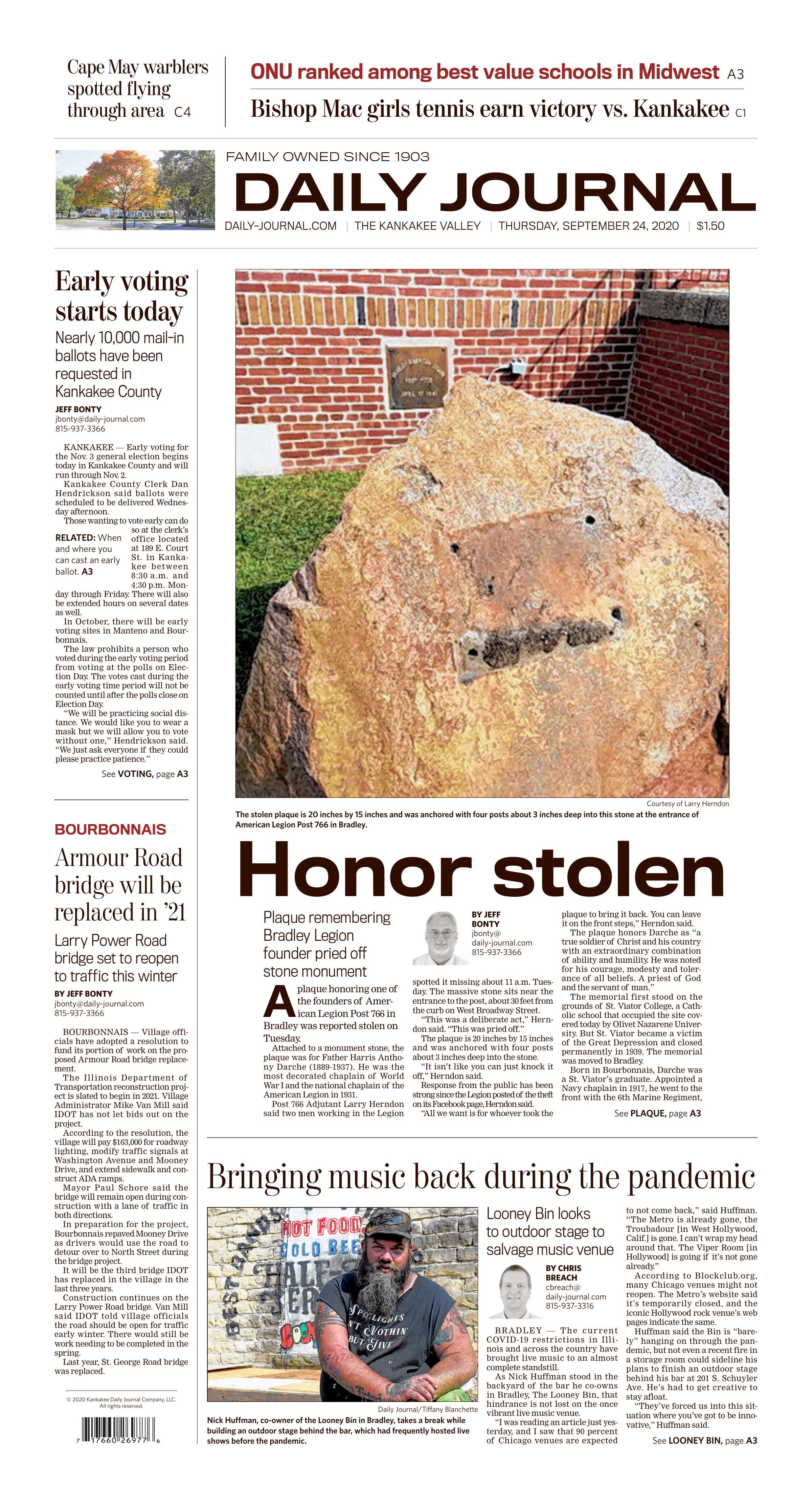