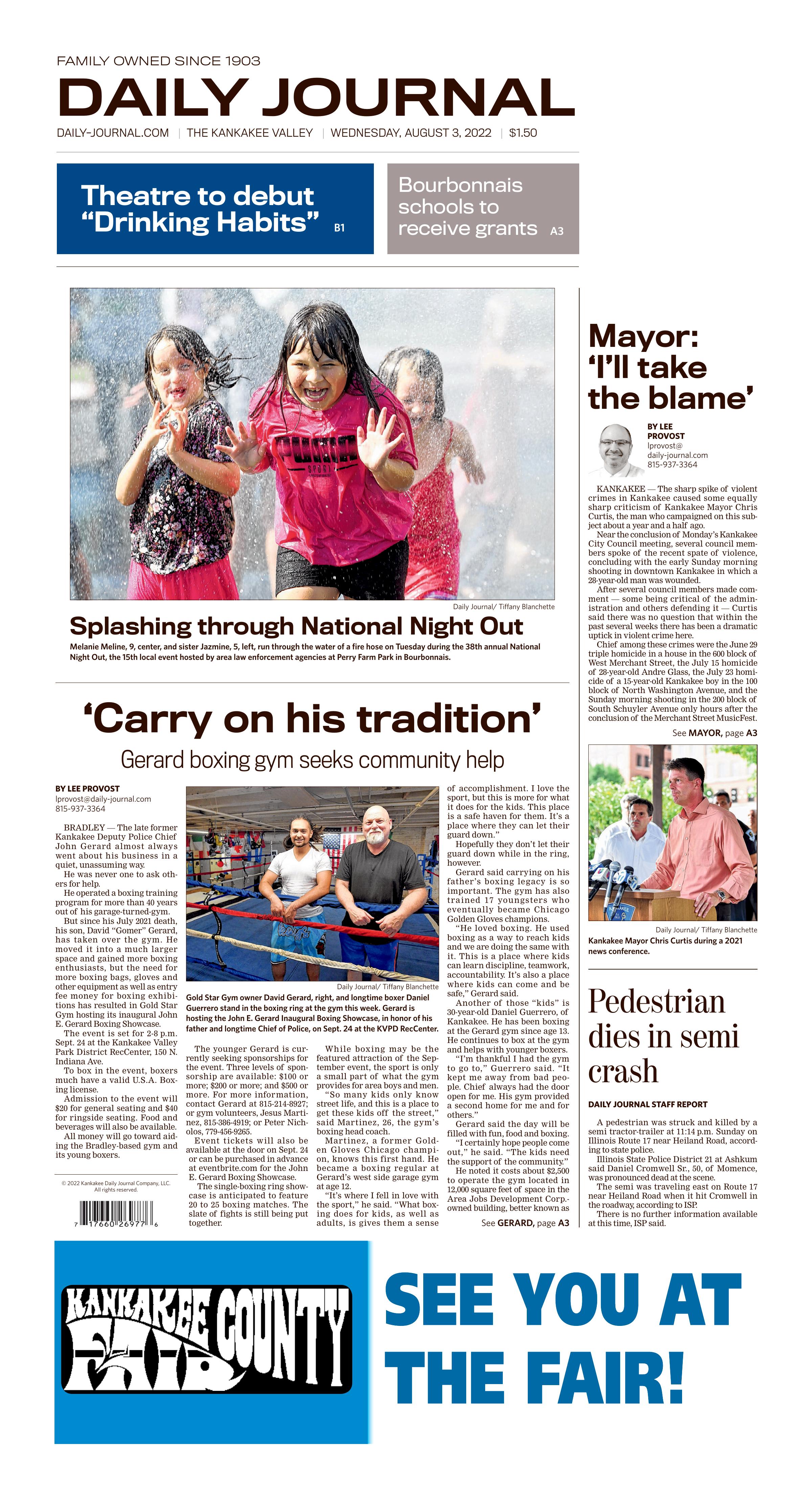 Gold Star Gym owner David Gerard, right, and longtime boxer Daniel Guerrero stand in the boxing ring at the gym this week. Gerard is hosting the John E. Gerard Inaugural Boxing Showcase, in honor of his father and longtime Chief of Police, on Spt. 24 at the KVPD RecCenter.

He was never one to ask others for help.

He operated a boxing training program for more than 40 years out of his garage-turned-gym.

But since his July 2021 death, his son, David “Gome” Gerard, has taken over the gym. He moved it into a much larger space and gained more boxing enthusiasts, but the need for more boxing bags, gloves and other equipment as well as entry fee money for boxing exhibitions has resulted in Gold Star Gym hosting its inaugural John E. Gerard Boxing Showcase.

To box in the event, boxers must have a valid U.S.A. Boxing license.

Admission to the event will be $20 for general seating and $40 for ringside seating. Food and beverages will also be available.

All money will go toward aiding the Bradley-based gym and its young boxers.

Event tickets will also be available at the door on Sept. 24 or can be purchased in advance at eventbrite.com for the John E. Gerard Boxing Showcase.

The single-boxing ring showcase is anticipated to feature 20 to 25 boxing matches. The slate of fights is still being put together.

While boxing may be the featured attraction of the September event, the sport is only a small part of what the gym provides for area boys and men.

“So many kids only know street life, and this is a place to get these kids off the street,” said Martinez, 26, the gym’s boxing head coach.

“It’s where I fell in love with the sport,” he said. “What boxing does for kids, as well as adults, is gives them a sense of accomplishment. I love the sport, but this is more for what it does for the kids. This place is a safe haven for them. It’s a place where they can let their guard down.”

Hopefully they don’t let their guard down while in the ring, however.

Another of those “kids” is 30-year-old Daniel Guerrero, of Kankakee. He has been boxing at the Gerard gym since age 13. He continues to box at the gym and helps with younger boxers.

“I’m thankful I had the gym to go to,” Guerrero said. “It kept me away from bad people. Chief always had the door open for me. His gym provided a second home for me and for others.”

Gerard said the day will be filled with fun, food and boxing.

“I certainly hope people come out,” he said. “The kids need the support of the community.”

He noted it costs about $2,500 to operate the gym located in 12,000 square feet of space in the Area Jobs Development Corp.-owned building, better known as the former Bradley Roper site. The gym has about 70 dues-paying members.

“He’d love this event,” the younger Gerard said of his father. “He certainly wanted us to keep this gym alive.”

Nicholos, a retired Kankakee police officer, began training at the Gerard gym as an eighth-grader. He has remained a presence at the gym.

“I believe this place is important. Chief meant so much to so many people and we want that legacy to continue,” Nicholos said. “He operated this gym because he cared about the community and the kids. He never sought notoriety. He did this out of the kindness of his heart. We are seeking to carry on his tradition.”

Authorities investigate the deaths of three men found June 29 inside a home in the 600 block of West Merchant Street in Kankakee. The recent rise of violent crime and the lack of progress on solving these cases was debated at Monday's Kankakee City Council meeting.

KANKAKEE — The sharp spike of violent crimes in Kankakee caused some equally sharp criticism of Kankakee Mayor Chris Curtis, the man who campaigned on this subject about a year and a half ago.

Near the conclusion of Monday’s Kankakee City Council meeting, several council members spoke of the recent spate of violence, concluding with the early Sunday morning shooting in downtown Kankakee in which a 28-year-old man was wounded.

After several council members made comment — some being critical of the administration and others defending it — Curtis said there was no question that within the past several weeks there has been a dramatic uptick in violent crime here.

Chief among these crimes were the June 29 triple homicide in a house in the 600 block of West Merchant Street, the July 15 homicide of 28-year-old Andre Glass, the July 23 homicide of a 15-year-old Kankakee boy in the 100 block of North Washington Avenue, and the Sunday morning shooting in the 200 block of South Schuyler Avenue only hours after the conclusion of the Merchant Street MusicFest.

“The last 30 to 40 days have been awful,” Curtis said after council members spoke about the sharp escalation of crime. “I’ll take the blame. I campaigned on this [issue].”

The tragedy, he said, is young men are losing their lives.

There have been seven homicides this year in Kankakee, five of which occurred in the past 40 days.

A 16-year-old boy has been arrested and charged as an adult in the shooting which left the 15-year-old boy dead.

Police have not yet made an arrest regarding the triple homicide, nor has an arrest been made in the early Sunday morning shooting.

The lack of arrests and the rise of these crimes brought criticism from some council members, chiefly 1st Ward Alderman Michael Prude.

Prude charged Curtis ran on the platform of reducing these types of crimes, and the numbers are rising rather than falling. He said people who may have information regarding these and other incidents are not coming forward.

Prude said he hasn’t heard the outcry from the council members who criticized former Mayor Chasity Wells-Armstrong for this same problem.

He said he finds the lack of comments from some council members to be disturbing.

“Nothing has changed. Things have gotten worse,” Prude said.

He then said he has not seen nor heard of a plan on how this problem is being addressed.

Alderman Larry Osenga, a retired longtime Kankakee police officer and commander, said there is only so much a police department can do. People must come forward.

Osenga noted that CrimeStoppers of Kankakee County, an organization where he serves as a board member, offered a $1,000 reward for information regarding the triple homicide.

The increased reward led to one anonymous telephone call, he said.

“Until this mentality charges, there is only so much we can do,” Osenga said.

Alderwoman Cherry Malone Marshall noted she has found out about many of these crimes by hearing about them from community members or reading about the crimes in the Daily Journal.

She said council members may be able to help by having people with knowledge of the crimes talk to them because many people simply do not have a comfort level with talking to police.

The mayor said information would be shared.

Police Chief Robin Passwater noted this has been a long-standing problem. People involved in crime or those with knowledge of a crime simply do not come forward.

He said detectives spend valuable time negotiating with witnesses or those close to witnesses to get them to talk to police.

And he stressed the lack of talking to police is not based in fear.

“They aren’t fearful. They are putting it out on Facebook,” Passwater said. “We can’t get them to talk to us.”

As a result of the unwillingness to share information, “It’s extremely difficult to work these cases,” Passwater said.

While Prude said Passwater has never shared sensitive information with him regarding a crime, Passwater told Prude he had never called police with any information he was aware of.

Some 15 minutes after the council meeting concluded, Curtis again reiterated the issue of violent crime has only gotten worse.

He said the trend had been going well, but near the end of June, violent crime has happened far too frequently.

“I campaigned on this,” he said. “If I’m not doing the job, the voters will decide.”

A pedestrian was struck and killed by a semi tractor-trailer at 11:14 p.m. Sunday on Illinois Route 17 near Heiland Road, according to state police.

The semi was traveling east on Route 17 near Heiland Road when it hit Cromwell in the roadway, according to ISP.

There is no further information available at this time, ISP said.