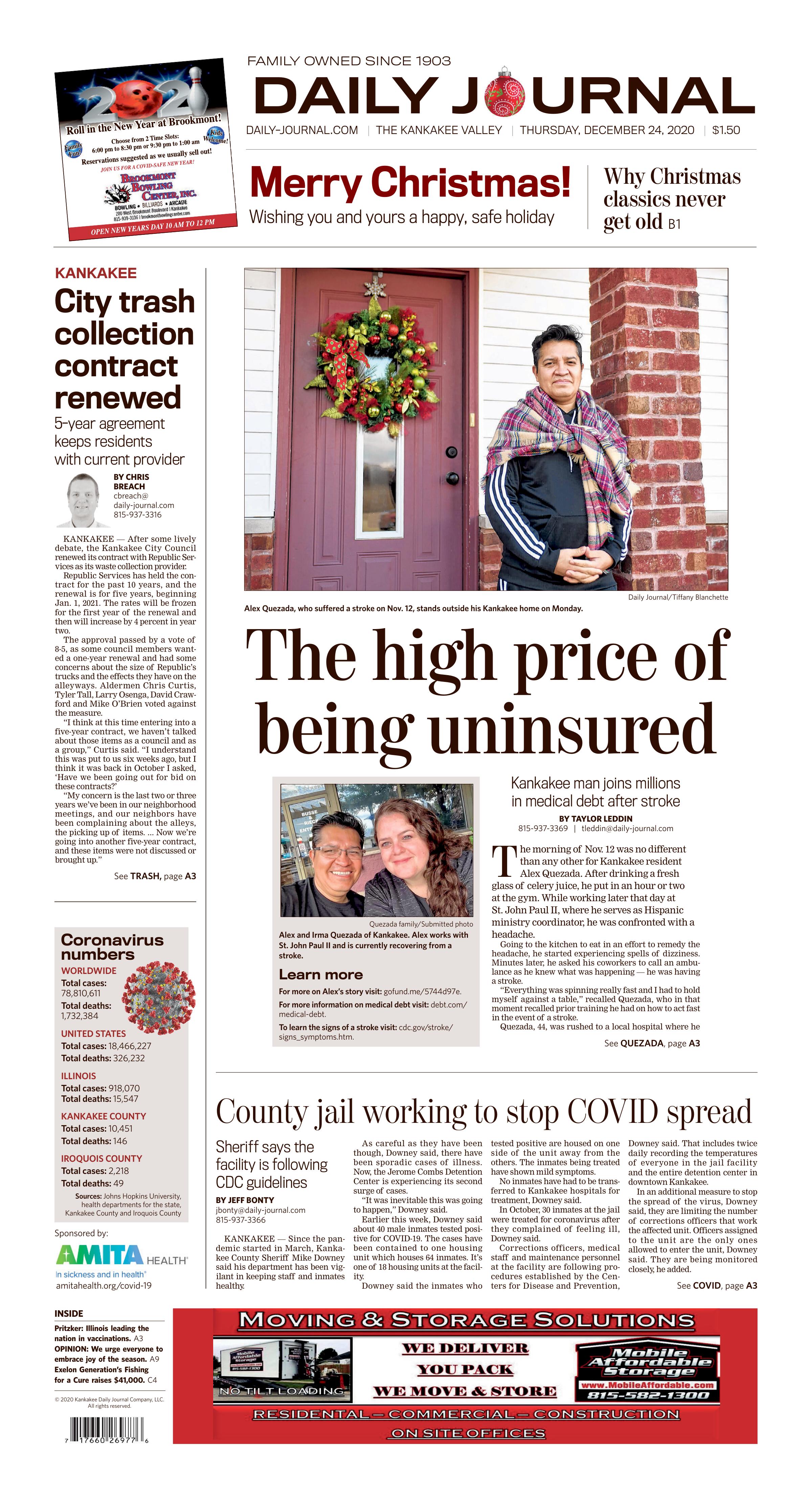 Alex Quezada, who suffered a stroke on Nov. 12, stands outside his Kankakee home on Monday.

Alex and Irma Quezada of Kankakee. Alex works with St. John Paul II and is currently recovering from a stroke.

The morning of Nov. 12 was no different than any other for Kankakee resident Alex Quezada. After drinking a fresh glass of celery juice, he put in an hour or two at the gym. While working later that day at St. John Paul II, where he serves as Hispanic ministry coordinator, he was confronted with a headache.

Going to the kitchen to eat in an effort to remedy the headache, he started experiencing spells of dizziness. Minutes later, he asked his coworkers to call an ambulance as he knew what was happening — he was having a stroke.

“Everything was spinning really fast and I had to hold myself against a table,” recalled Quezada, who in that moment recalled prior training he had on how to act fast in the event of a stroke.

Quezada, 44, was rushed to a local hospital where he underwent testing and evaluation. It was determined that he had suffered a massive, ischemic stroke due to a blood clot. Increasing swelling in the brain would require surgery.

Due to an influx of COVID, there were no rooms available and Quezada was transferred to Peoria by helicopter, something that would wind up costing the uninsured Quezada $50,000 alone.

Because he works two part-time jobs – with St. John Paul II and with the Diocese of Joliet as relief and development coordinator for the Office of Human Dignity — he does not work enough hours at one job or the other to receive insurance benefits. His wife, Irma Quezada, who Alex married in October of this year, was left without insurance after losing her job due to COVID.

“Not having medical insurance, those moments [become] a ‘well, we’ll figure it out,’” said Irma of making difficult and time-sensitive medical decisions on her husband’s behalf.

This past August in an analysis by Credit Karma, the consumer finance company found a total of $45 billion in medical debt collections for 20 million Americans. Medical debt has only grown as the pandemic has continued to surge, with already 32 percent of American workers holding medical debt prior to the pandemic.

According to Debt.com, the highest percentage of medical debt comes from hospitalizations (which can cost an average of $5,220 per day). The financial education expert advises individuals to always review medical bills to make sure the information is accurate, be aware of what insurance covers (if applicable), negotiate bills, ask about a payment plan and look into medical credit cards.

“As long as he’s getting the medical attention he needs, we’ll figure out the rest,” explained Irma of the medical expenses.

After giving back to his church communities for so long, Alex’s peers made an effort to give back to him by checking in and by sending food and cards.

Barb Linek, director of advancement with Family Bridges, began a GoFundMe page on Alex's behalf as the two have been working in the community together for some time.

“I’m so grateful, I don’t know how to thank people,” said Alex, who is hoping to get back to working with his community soon.

Just over a month after his stroke, Alex expresses his gratitude toward his family (he and Irma have five children combined — Leslie, 22, Ian, 17, Ashanti, 15, Mario, 11, and Xaiver, 9) and friends for helping his recovery process. Even when discussing the issue of medical expenses, Alex’s gratitude and positivity never waivers.

“I hope this reflects to other people who are walking the same path that we have to help each other out,” said Alex.

Alex is working virtually with a physical therapist who volunteers her time to assist others in their recovery process. While still dizzy and having some difficulties walking, Alex has already stopped the use of a walker and is making steady progress.

“His recovery has been a miracle,” expressed Irma. “Nothing short of a miracle.”

To learn the signs of a stroke, visit cdc.gov/stroke/signs_symptoms.htm.

KANKAKEE — Since the pandemic started in March, Kankakee County Sheriff Mike Downey said his department has been vigilant in keeping staff and inmates healthy.

As careful as they have been though, Downey said, there have been sporadic cases of illness. Now, the Jerome Combs Detention Center is experiencing its second surge of cases.

“It was inevitable this was going to happen,” Downey said.

Earlier this week, Downey said about 40 male inmates tested positive for COVID-19. The cases have been contained to one housing unit which houses 64 inmates. It’s one of 18 housing units at the facility.

Downey said the inmates who tested positive are housed on one side of the unit away from the others. The inmates being treated have shown mild symptoms.

No inmates have had to be transferred to Kankakee hospitals for treatment, Downey said.

In October, 30 inmates at the jail were treated for coronavirus after they complained of feeling ill, Downey said.

Corrections officers, medical staff and maintenance personnel at the facility are following procedures established by the Centers for Disease and Prevention, Downey said. That includes twice daily recording the temperatures of everyone in the jail facility and the entire detention center in downtown Kankakee.

In an additional measure to stop the spread of the virus, Downey said, they are limiting the number of corrections officers that work the affected unit. Officers assigned to the unit are the only ones allowed to enter the unit, Downey said. They are being monitored closely, he added.

When a new arrestee is booked into the jail, they are quarantined for 14 days as a precaution before being moved into the general population.

Personal Protective Equipment (PPE) continues to be provided to both employees and detainees and staff continues to take extra precautions, he said. Rapid testing kits are available.

The medical staff has remained on the forefront of the issue and continues to work closely with the Kankakee County Health Department and is adhering to CDC guidelines for testing, tracing, quarantining and treating, Downey said.

The county has a contract with the U.S. Marshals and U.S. Immigration and Customs Enforcement to house detainees at Jerome Combs Detention Center.

KANKAKEE — After some lively debate, the Kankakee City Council renewed its contract with Republic Services as its waste collection provider.

Republic Services has held the contract for the past 10 years, and the renewal is for five years, beginning Jan. 1, 2021. The rates will be frozen for the first year of the renewal and then will increase by 4 percent in year two.

The approval passed by a vote of 8-5, as some council members wanted a one-year renewal and had some concerns about the size of Republic’s trucks and the effects they have on the alleyways. Aldermen Chris Curtis, Tyler Tall, Larry Osenga, David Crawford and Mike O’Brien voted against the measure.

“I think at this time entering into a five-year contract, we haven’t talked about those items as a council and as a group,” Curtis said. “I understand this was put to us six weeks ago, but I think it was back in October I asked, ‘Have we been going out for bid on these contracts?’

“My concern is the last two or three years we’ve been in our neighborhood meetings, and our neighbors have been complaining about the alleys, the picking up of items. ... Now we’re going into another five-year contract, and these items were not discussed or brought up.”

Crawford said he agreed with Curtis and was hopeful the city could meet with Republic or possibly another contractor to address the problems with the alleys.

Tall said his main concern was the waste removal contract didn’t go out to bid.

“I believe that Republic is a good company,” Tall said. “They do a decent job, not a great job. There are times when they aren’t able to load the large items. It becomes unsightly in our community when we have a couch that sits out for three or four weeks and they fail to pick it up.

“If we would’ve done our due diligence, anything over $5,000 we should’ve gone out for bid on. ... I support [Republic], but we give away our bargaining power when we don’t go out to bid.”

Currently, Kankakee residents for a single family home pay $36.77 per month for garbage removal as part of their monthly municipal utility bill. It will remain the same for 2021, and then it will increase by $1.47 for 2022 and through the remainder of the contract.

Alderwoman Danita Swanson said Republic has done a fantastic job and has done a good job addressing any issues that were brought to them. She said the size of truck Republic uses is large because it has to be able to pick up the blue trash containers.

“Our alleys used to be a terrible mess,” Swanson said. “Everybody’s garbage was all over, and everybody had a different kind of garbage can. Having that type of garbage can [now] has been a great asset to our community and is helping to keep the alleys clean. I feel a five-year contract is the way to go just to save our residents money.”

Republic Services said it has been providing its services to Kankakee for the past 10 years.

“Our current contract, which was due to expire at the end of this year, included the option for Kankakee to extend for an additional five-year term,” the company said in an email to the Daily Journal. “On Monday, this extension was approved. Republic Services looks forward to continuing our long-standing partnership with Kankakee and providing quality service to residents.”

Mayor Chasity Wells-Armstrong said the city’s legal department said Kankakee’s contract is 14 percent less than surrounding municipalities, and it will save homeowners money.

“This was on the agenda for six weeks,” Wells-Armstrong told the council. “I’ve asked you all to let me know if you wanted a one-year or a five-year, and I really didn’t hear from very many people, just a couple. Because the legal team recommended five [years], that’s what was put on the agenda.”