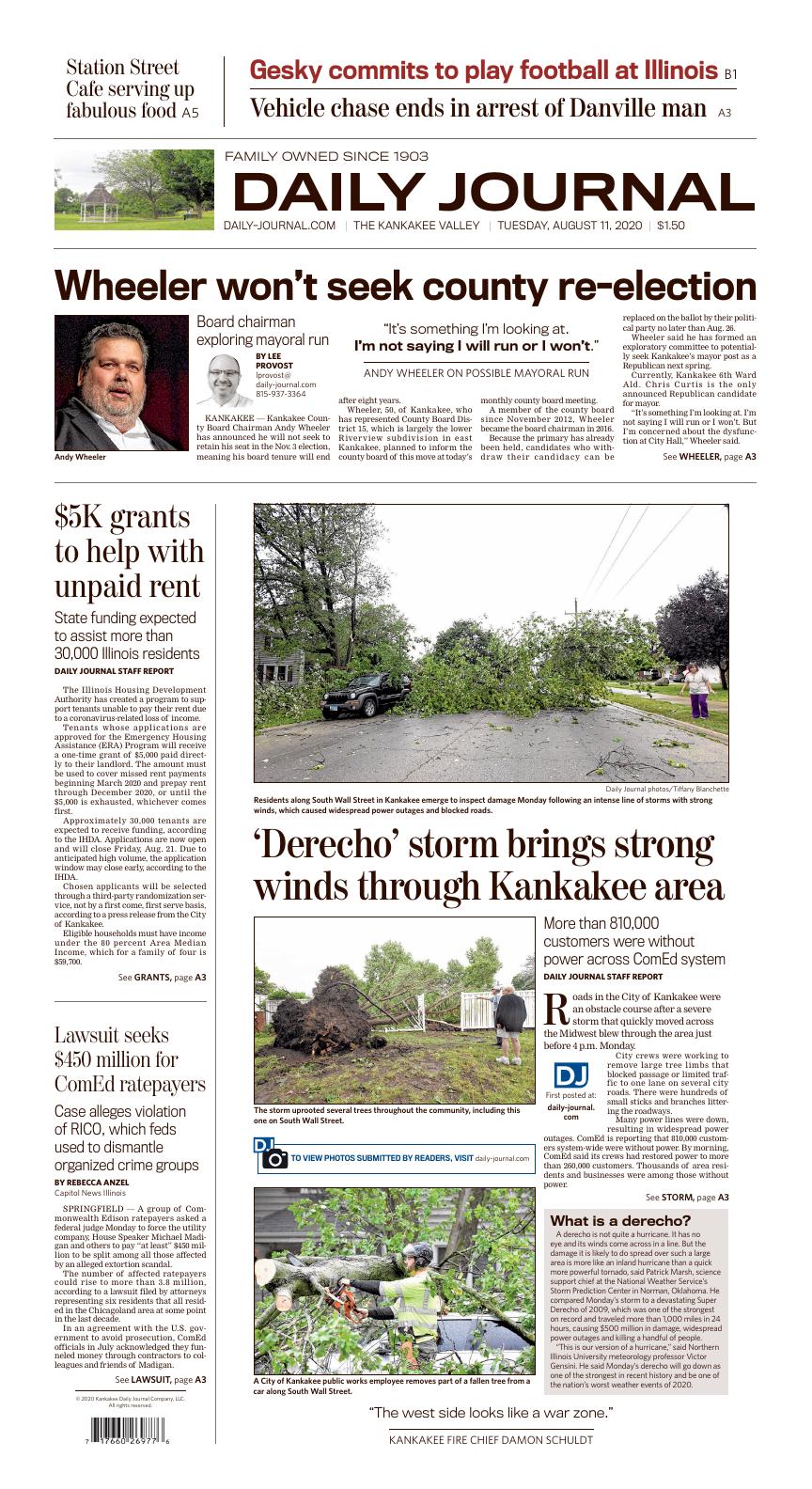 KANKAKEE — Kankakee County Board Chairman Andy Wheeler has announced he will not seek to retain his seat in the Nov. 3 election, meaning his board tenure will end after eight years.

Wheeler, 50, of Kankakee, who has represented County Board District 15, which is largely the lower Riverview subdivision in east Kankakee, planned to inform the county board of this move at today’s monthly county board meeting.

A member of the county board since November 2012, Wheeler became the board chairman in 2016.

Because the primary has already been held, candidates who withdraw their candidacy can be replaced on the ballot by their political party no later than Aug. 26.

Wheeler said he has formed an exploratory committee to potentially seek Kankakee’s mayor post as a Republican next spring.

“It’s something I’m looking at. I’m not saying I will run or I won’t. But I’m concerned about the dysfunction at City Hall,” Wheeler said.

Wheeler replaced Mike Bossert as county board chairman. Defeated in the March 2016 election by Shane Ritte, Bossert had served on the board for 12 years and had been its chairman for eight years.

Currently, County Board member Todd Sirois, who represents the St. Anne area as part of District 3, is the vice chairman. The new chairman will be selected following the seating of the new board after the November election. The current board has a 22-6 Republican majority so the new chairman will most certainly be a member of the GOP.

Wheeler informed the executive staff of his decision Monday, and he planned to address the full County Board today.

Wheeler was being opposed by Democrat candidate Kimberly Hudson, a former teacher at Bishop McNamara Catholic High School. She also serves of the board of the Kankakee County Community Services Inc. as its vice president.

This is Hudson’s first run at elected office.

Wheeler said District 15 is of such a political makeup — meaning registered Democrats versus registered Republicans — that in his mind, it is more than he can overcome.

“You can fight all you want, but I looked at this from so many different angles and there is no path to victory for me,” he said. “I can find no evidence anywhere where there is victory. ... There are more important things to tackle.”

Under Wheeler’s leadership, the county eliminated its massive debt, improved its bond rating and opened board meetings to public access through the internet.

He noted the county also was a chief advocate into aiding CSL’s expansion by helping get needed transportation improvements at or near the site. The county also has worked with other state and utility leadership figures to renew the effort to bring natural gas service to the Hopkins Park area.

Wheeler said there was much more that he wanted to do, but, sometimes, things don’t work out as planned.

“This day came quicker than I would have hoped,” he said.

"I'm not saying I will run or I won't. But I'm concerned about the dysfunction at City Hall."

Residents along South Wall Street in Kankakee emerge to inspect the damage from an uprooted tree Monday.

A City of Kankakee public works employee removes part of a fallen tree from a car along South Wall Street.

City of Kankakee public works employees stand by as debris is cleared on South Wall Street in Kankakee Monday.

A semi-truck lies on its side in the Walmart parking lot. The incident accompanies reports of overturned semis along interstates 57 and 80 among others.

A resident clears a branch from West Hawkins Street shortly after the storm let up Monday in West Kankakee.

A tree along West Hawkins Street in Kankakee blockades most of the road after half of it snapped Monday during a storm.

One of several large trees snapped near the base Monday in Small Memorial Park in West Kankakee.

The storm arrives just before 4 p.m. to Kankakee’s west side as seen over the KHS football field.

Roads in the City of Kankakee were an obstacle course after a severe storm that quickly moved across the Midwest blew through the area just before 4 p.m. Monday.

City crews were working to remove large tree limbs that blocked passage or limited traffic to one lane on several city roads. There were hundreds of small sticks and branches littering the roadways.

Many power lines were down, resulting in widespread power outages. ComEd is reporting that 810,000 customers system-wide were without power. By morning, ComEd said its crews had restored power to more than 260,000 customers. Thousands of area residents and businesses were among those without power.

Though 1,900 people are working to restore power, ComEd expects it will take multiple days to restore service to all of the customers affected by the storm, according to a press release. The utility has employed out-of-state assistance.

Power outages at lighted intersections created traffic backups Monday afternoon on the west side of Kankakee.

In Kankakee, it appears that the west side of Kankakee bore the brunt of the storm.

“The west side looks like a war zone,” Kankakee Fire Chief Damon Schuldt said. “I had trouble getting around.”

Schuldt said the Riverview neighborhood had a lot of damage as well.

A semi-truck was overturned in the Kankakee Walmart parking lot. The incident accompanies reports of overturned semis along interstates 57 and 80 among others.

In Bourbonnais, Fire Chief Ed Louis reported several trees and power lines down. At least two homes were damaged by trees falling through the roof, he said.

“Limestone seems much worse than us and also Aroma Park,” he said.

Limestone Fire Protection District Chief Mike Whalen concurred the damage is bad, saying he believes the storm was a microburst.

The storm that caused such damage here is the same system that ransacked eastern Nebraska, Iowa and Wisconsin earlier in the day. Meteorologists say it was derecho, a rare wind storm with wind speeds similar to those of a major hurricane, said Patrick Marsh, science support chief at the National Weather Service’s Storm Prediction Center in Norman, Oklahoma. He added that the storm likely caused more widespread damage than a tornado.

Wind speeds of 100 mph were recorded in northern Illinois.

What is a derecho?

A derecho is not quite a hurricane. It has no eye and its winds come across in a line. But the damage it is likely to do spread over such a large area is more like an inland hurricane than a quick more powerful tornado, said Patrick Marsh, science support chief at the National Weather Service’s Storm Prediction Center in Norman, Oklahoma. He compared Monday's storm to a devastating Super Derecho of 2009, which was one of the strongest on record and traveled more than 1,000 miles in 24 hours, causing $500 million in damage, widespread power outages and killing a handful of people.

“This is our version of a hurricane,” said Northern Illinois University meteorology professor Victor Gensini. He said Monday's derecho will go down as one of the strongest in recent history and be one of the nation's worst weather events of 2020.

The Illinois Housing Development Authority has created a program to support tenants unable to pay their rent due to a coronavirus-related loss of income.

Tenants whose applications are approved for the Emergency Housing Assistance (ERA) Program will receive a one-time grant of $5,000 paid directly to their landlord. The amount must be used to cover missed rent payments beginning March 2020 and prepay rent through December 2020, or until the $5,000 is exhausted, whichever comes first.

Chosen applicants will be selected through a third-party randomization service, not by a first come, first serve basis, according to a press release from the City of Kankakee.

Eligible households must have income under the 80 percent Area Median Income, which for a family of four is $59,700.

Applicants must also have unpaid rent that began on or after March 1, 2020, due to the loss of income related to COVID-19. If approved, payments are wired directly to landlords within 10 business days or 15-20 days if sent by paper check.

To apply, visit www.era.ihda.org and check your eligibility by entering your name, email, ZIP code, and household income. If you are eligible, you must submit your application online and your landlord will also need to complete his or her part of the submission process.

For complete information on how to apply, visit ecda.citykankakee-il.gov. You may also contact Duane Dean Behavioral Health Center, which is a community partner for the program, by calling 773-564-9070.

• Your household income before March 1, 2020, was within the allowable limits.

• You suffered a loss of income due to COVID-19.

• You missed a rent payment on or after March 1, 2020, and your landlord is willing to participate.

SPRINGFIELD — A group of Commonwealth Edison ratepayers asked a federal judge Monday to force the utility company, House Speaker Michael Madigan and others to pay “at least” $450 million to be split among all those affected by an alleged extortion scandal.

The number of affected ratepayers could rise to more than 3.8 million, according to a lawsuit filed by attorneys representing six residents that all resided in the Chicagoland area at some point in the last decade.

In an agreement with the U.S. government to avoid prosecution, ComEd officials in July acknowledged they funneled money through contractors to colleagues and friends of Madigan.

Those “bribes” — which total more than $1.3 million according to a federal lawsuit filed Monday — were made from 2011 through 2019 in an attempt to influence the longtime House gatekeeper to pass legislation favorable to the utility and kill other bills that would negatively impact the company.

That “racketeering scheme” generated more than $150 million in profits for ComEd, according to the document — all of which is money paid by customers in service charge hikes and fees implemented by laws for which ComEd and its parent company, Exelon Corporation, lobbied in support.

ComEd distributes electricity to 70 percent of Illinoisans, according to the lawsuit, making the company the largest utility in the state.

Exelon, ComEd, Madigan and various other officials participated in an operation designed to enrich themselves while defrauding consumers, the lawsuit alleges. That would be a violation of the Racketeer Influenced and Corrupt Organization Act, used by the federal government to prosecute and dismantle organized crime groups.

If a judge in the Eastern Division of Illinois’ Northern District agrees, ComEd ratepayers could be compensated the $150 million the utility earned in profit “threefold” as well as attorneys’ fees.

The Illinoisans who filed the case also requested a judge bar Madigan from being involved in any way with legislation affecting electricity in the state. They also want a judge to force him to resign as chairman of the Democratic Party of Illinois “in order to prevent him from continuing to run the state party in a corrupt manner.” He has held that position since 1998.

A spokesperson for the speaker did not respond to a request for comment.{span class=”print_trim”} 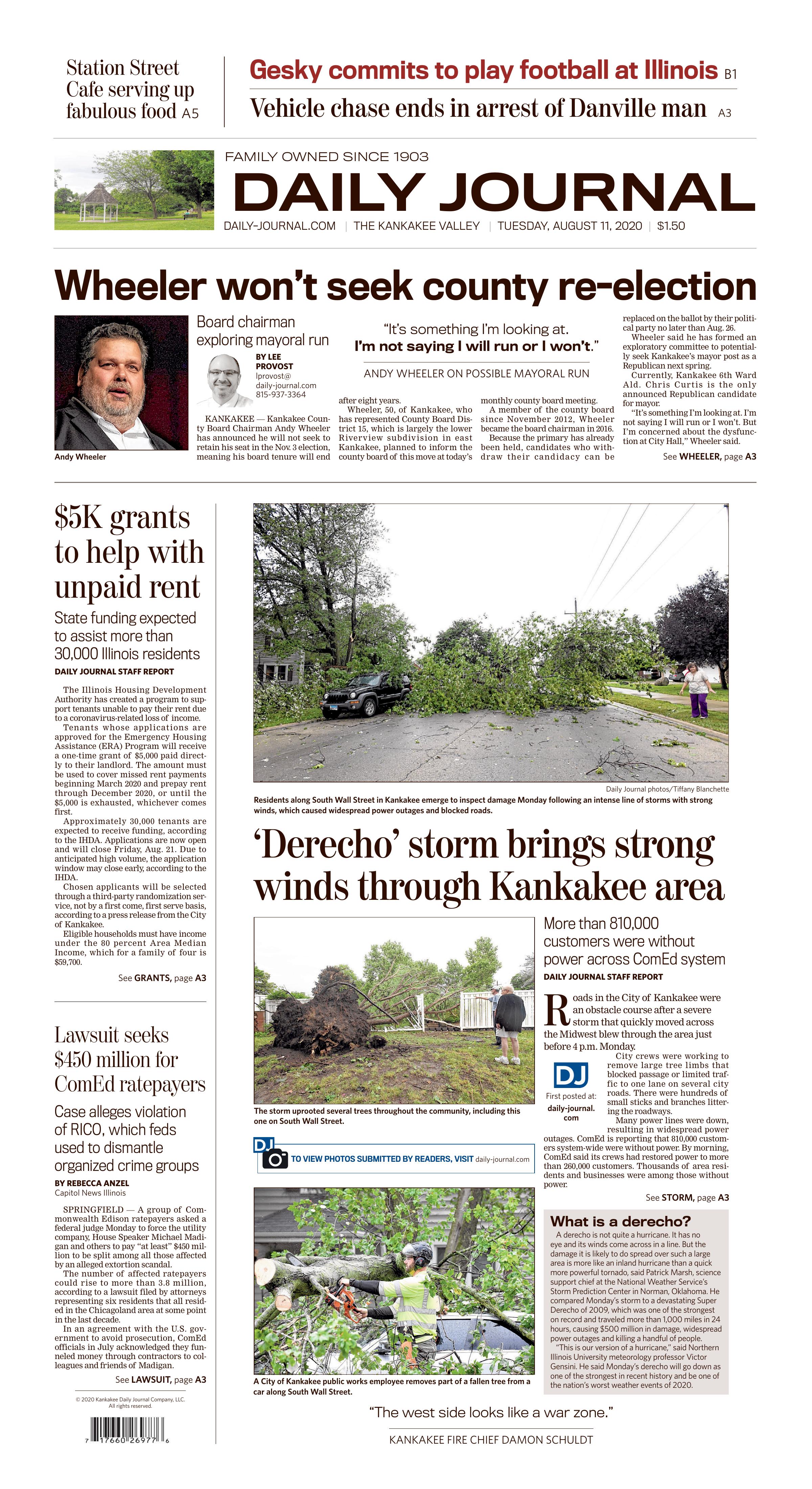