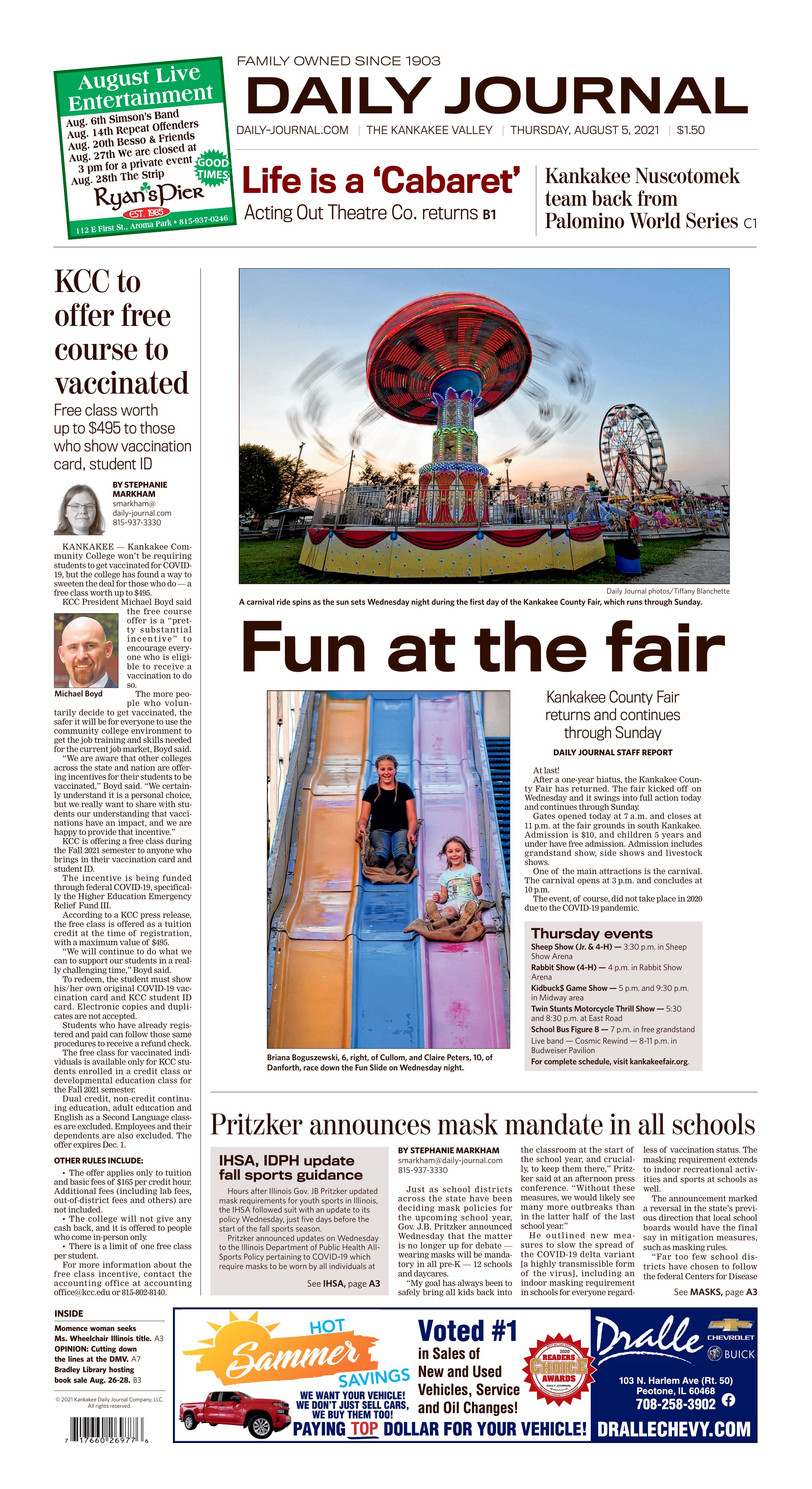 A carnival ride spins as the sun sets Wednesday night during the first day of the Kankakee County Fair, which runs through Sunday.

Briana Boguszewski, 6, right, of Cullom, and Claire Peters, 10, of Danforth, race down the Fun Slide on Wednesday night during the first day of the Kankakee County Fair, which runs through Sunday. MORE PHOTOS.

A family walks through the carnival Wednesday night during the first day of the Kankakee County Fair, which runs through Sunday.

Lawrence Frederick and his dog Galaxy Girl perform with the Disc-Connected K9’s team Wednesday night during the first day of the Kankakee County Fair. Catch the teams performance again tonight and Friday at 6 and 9 p.m., as well as more times through the weekend. Find the full fair schedule here: www.kankakeefair.org/events/fair-schedule

A fairgoer visits the roosters in the poultry barn Wednesday night during the first day of the Kankakee County Fair. Animals ranging from pigeons to ponies to livestock all take up quarters at the fairgrounds ahead of various competitive showings.

After a one-year hiatus, the Kankakee County Fair has returned. The fair kicked off on Wednesday and it swings into full action today and continues through Sunday.

Gates opened today at 7 a.m. and closes at 11 p.m. at the fair grounds in south Kankakee. Admission is $10, and children 5 years and under have free admission. Admission includes grandstand show, side shows and livestock shows.

One of the main attractions is the carnival. The carnival opens at 3 p.m. and concludes at 10 p.m.

Just as school districts across the state have been deciding mask policies for the upcoming school year, Gov. J.B. Pritzker announced Wednesday that the matter is no longer up for debate — wearing masks will be mandatory in all pre-K - 12 schools and daycares.

“My goal has always been to safely bring all kids back into the classroom at the start of the school year, and crucially, to keep them there,” Pritzker said at an afternoon press conference. “Without these measures, we would likely see many more outbreaks than in the latter half of the last school year.”

He outlined new measures to slow the spread of the COVID-19 delta variant [a highly transmissible form of the virus], including an indoor masking requirement in schools for everyone regardless of vaccination status. The masking requirement extends to indoor recreational activities and sports at schools as well.

The announcement marked a reversal in the state’s previous direction that local school boards would have the final say in mitigation measures, such as masking rules.

“Far too few school districts have chosen to follow the federal Centers for Disease Control’s prescriptions for keeping students and staff safe. … Given the CDC’s strong recommendation, I had hoped that a state mask requirement in schools wouldn’t be necessary, but it is,” Pritzker said.

He went on to encourage parents of eligible minors [over age 12] to get their children vaccinated as soon as possible and said the state would provide masks to any school districts that need them, in addition to providing free COVID-19 testing equipment to all public schools.

Locally, some Kankakee County school districts were planning to make masks optional in the fall, while others were still deciding. Those that were planning to implement mask-optional policies will no longer be able to do so, per the Wednesday announcement.

The Kankakee District 111 School Board discussed potential mask policy at its recent July meeting, with four out of seven board members speaking in favor of requiring masks, and was slated to vote on the issue Aug. 9.

Due to the state mandate, the question of whether or not to require masks in schools will no longer require a vote.

Kankakee Superintendent Genevra Walters said that, given the uncertainty of the delta variant, she feels it is best for schools to be cautious entering the school year and re-evaluate the need for masks after a few months.

“Personally, I would like [wearing a mask] to be optional for me as an individual, but when you’re responsible for 5,500 students, you can’t think as an individual,” Walters said. “I think to be safe, especially with what I’m hearing about the new delta variant, I think it’s in everyone’s best interest to start off the school year safe until we see how it impacts students in school.”

While she would have preferred local control for schools, Walters said she understands that state leaders are attempting to do what is best for the majority of people.

“Wearing a mask or not wearing a mask doesn’t affect the educational opportunities for students,” she added. “So, mandating that we wear masks, I don’t think actually hurts kids in any way.”

Herscher CUSD 2 Superintendent Rich Decman said that during the district’s July school board meeting, about a dozen parents spoke against mandatory masks.

With low COVID-19 rates at the time, the board was in agreement and had decided the district would strongly encourage but not require masks, he said.

“We’re pretty frustrated about the inability to make local decisions,” he said. “That’s the one part that is very irksome.”

Decman said the district would follow the mandate as required, though it would have saved a lot of time if districts weren’t previously told they could make the calls for themselves.

“Not just us, but all across the state, we felt like we wasted a whole bunch of time discussing this stuff, but it is what it is,” he said. “I’m sure there will be some anger and stuff like that, but it’s another thing we’ll have to get through.”

In light of Pritzker’s announcement, Bradley Elementary School District 61 cancelled the special board meeting scheduled for Thursday, when back-to-school plans were to be discussed.

Bradley-Bourbonnais Community High School administrators are in discussions this week about a back-to-school plan, including the new state mask mandate, BBCHS Superintendent Matt Vosberg said via email. He said the school would adjust its plans accordingly following the announcement.

“We are aware that the metrics in the state and region continue to fluctuate so we have to be flexible in our planning,” Vosberg said in the email. “Our first priority is to ensure students and staff are safe with the goal of having a normal and complete school year to the best of our ability.”

KANKAKEE — Kankakee Community College won’t be requiring students to get vaccinated for COVID-19, but the college has found a way to sweeten the deal for those who do — a free class worth up to $495.

KCC President Michael Boyd said the free course offer is a “pretty substantial incentive” to encourage everyone who is eligible to receive a vaccination to do so.

The more people who voluntarily decide to get vaccinated, the safer it will be for everyone to use the community college environment to get the job training and skills needed for the current job market, Boyd said.

“We are aware that other colleges across the state and nation are offering incentives for their students to be vaccinated,” Boyd said. “We certainly understand it is a personal choice, but we really want to share with students our understanding that vaccinations have an impact, and we are happy to provide that incentive.”

KCC is offering a free class during the Fall 2021 semester to anyone who brings in their vaccination card and student ID.

The incentive is being funded through federal COVID-19, specifically the Higher Education Emergency Relief Fund III.

According to a KCC press release, the free class is offered as a tuition credit at the time of registration, with a maximum value of $495.

“We will continue to do what we can to support our students in a really challenging time,” Boyd said.

To redeem, the student must show his/her own original COVID-19 vaccination card and KCC student ID card. Electronic copies and duplicates are not accepted.

Students who have already registered and paid can follow those same procedures to receive a refund check.

The free class for vaccinated individuals is available only for KCC students enrolled in a credit class or developmental education class for the Fall 2021 semester.