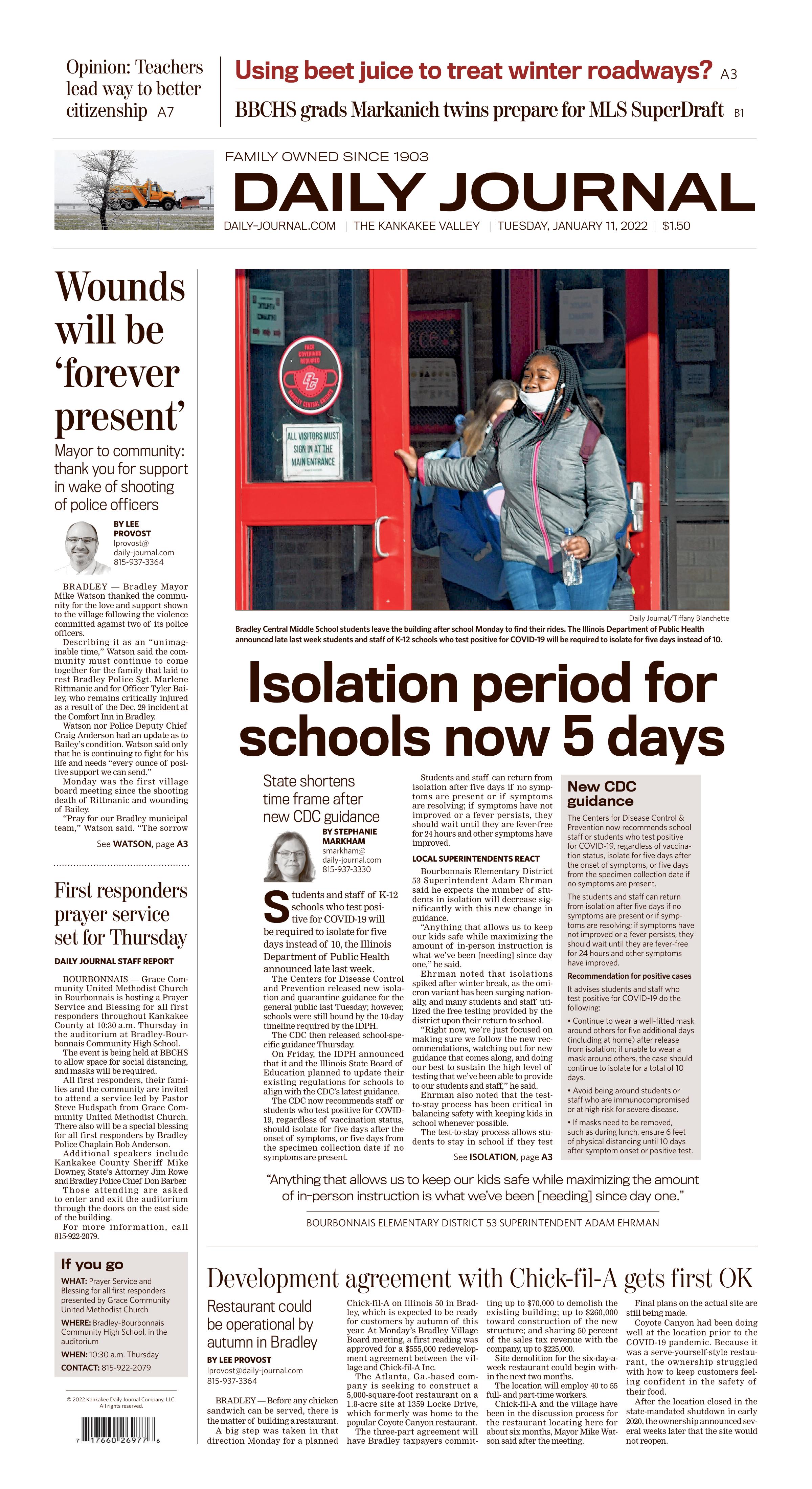 Chick-fil-A could be open by late 2022 in Bradley. The company and Bradley entered into a redevelopment agreement for the site.

BRADLEY — Before any chicken sandwich can be served, there is the matter of building a restaurant.

A big step was taken in that direction Monday for a planned Chick-fil-A on Illinois 50 in Bradley, which is expected to be ready for customers by autumn of this year. At Monday’s Bradley Village Board meeting, a first reading was approved for a $555,000 redevelopment agreement between the village and Chick-fil-A Inc.

The Atlanta, Ga.-based company is seeking to construct a 5,000-square-foot restaurant on a 1.8-acre site at 1359 Locke Drive, which formerly was home to the popular Coyote Canyon restaurant.

The three-part agreement will have Bradley taxpayers committing up to $70,000 to demolish the existing building; up to $260,000 toward construction of the new structure; and sharing 50 percent of the sales tax revenue with the company, up to $225,000.

Site demolition for the six-day-a-week restaurant could begin within the next two months.

The location will employ 40 to 55 full- and part-time workers.

Chick-fil-A and the village have been in the discussion process for the restaurant locating here for about six months, Mayor Mike Watson said after the meeting.

Final plans on the actual site are still being made.

Coyote Canyon had been doing well at the location prior to the COVID-19 pandemic. Because it was a serve-yourself-style restaurant, the ownership struggled with how to keep customers feeling confident in the safety of their food.

After the location closed in the state-mandated shutdown in early 2020, the ownership announced several weeks later that the site would not reopen.

Bradley Mayor Mike Watson bows his head as he leads a prayer ahead of Monday's village board meeting, the first since the shooting of two Bradley police officers.

BRADLEY — Bradley Mayor Mike Watson thanked the community for the love and support shown to the village following the violence committed against two of its police officers.

Describing it as an “unimaginable time,” Watson said the community must continue to come together for the family that laid to rest Bradley Police Sgt. Marlene Rittmanic and for Officer Tyler Bailey, who remains critically injured as a result of the Dec. 29 incident at the Comfort Inn in Bradley.

Watson nor Police Deputy Chief Craig Anderson had an update as to Bailey’s condition. Watson said only that he is continuing to fight for his life and needs “every ounce of positive support we can send.”

Monday was the first village board meeting since the shooting death of Rittmanic and wounding of Bailey.

“Pray for our Bradley municipal team,” Watson said. “The sorrow felt in the police office is beyond grief,” he said. “The bravery in showing up and supporting the injured and fallen is beyond a courage I have seen or will see again in my lifetime.

“We personally thank and support our police department and all our municipal family for the support and love shown during this unimaginable time.”

He then addressed village residents, saying “we need you more than ever.”

“We need your love in the color of blue,” he said. “We need your words and praise and love to show our municipal family they are supported. Thank you for the tremendous outreach of kindness to keep our hearts filled with love as it is the one counterbalance to hate.

“Let’s continue to love each other and show evil it has no place in the Village of Bradley,” he said.

The mayor added that the evil acts of “pure violence” committed are opposite to the virtues and integrity both of these officers bestowed upon the community.

“These wounds will be forever present and the memories never forgotten,” he said.

BOURBONNAIS — Grace Community United Methodist Church in Bourbonnais is hosting a Prayer Service and Blessing for all first responders throughout Kankakee County at 10:30 a.m. Thursday in the auditorium at Bradley-Bourbonnais Community High School.

The event is being held at BBCHS to allow space for social distancing, and masks will be required.

All first responders, their families and the community are invited to attend a service led by Pastor Steve Hudspath from Grace Community United Methodist Church. There also will be a special blessing for all first responders by Bradley Police Chaplain Bob Anderson.

Those attending are asked to enter and exit the auditorium through the doors on the east side of the building.

WHAT: Prayer Service and Blessing for all first responders with Grace Community United Methodist Church

WHERE: Bradley-Bourbonnais Community High School, in the auditorium