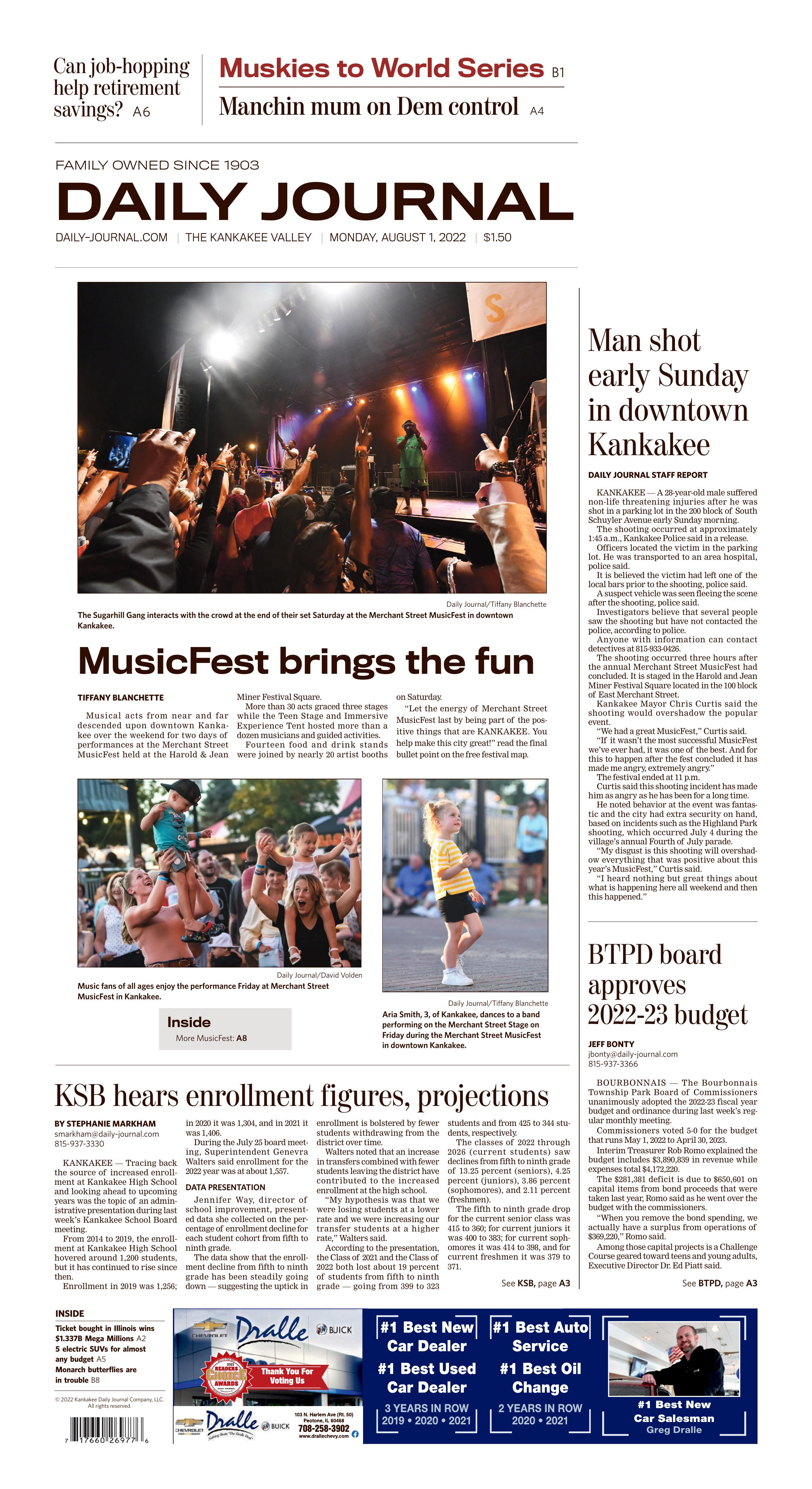 KANKAKEE — Tracing back the source of increased enrollment at Kankakee High School and looking ahead to upcoming years was the topic of an administrative presentation during last week’s Kankakee School Board meeting.

From 2014 to 2019, the enrollment at Kankakee High School hovered around 1,200 students, but it has continued to rise since then.

During the July 25 board meeting, Superintendent Genevra Walters said enrollment for the 2022 year was at about 1,557.

Jennifer Way, director of school improvement, presented data she collected on the percentage of enrollment decline for each student cohort from fifth to ninth grade.

The data show that the enrollment decline from fifth to ninth grade has been steadily going down — suggesting the uptick in enrollment is bolstered by fewer students withdrawing from the district over time.

Walters noted that an increase in transfers combined with fewer students leaving the district have contributed to the increased enrollment at the high school.

“My hypothesis was that we were losing students at a lower rate and we were increasing our transfer students at a higher rate,” Walters said.

Walters said the enrollment trend going forward is uncertain, as the number of transfers and withdrawals are difficult to predict.

“What’s not clear to me, in terms of projections over the next four to five years, if we continue to have an increase in transfers and a decrease in withdrawals, I’m not sure that the high school data will decrease significantly over the next five years,” she said.

“That’s something that you probably have to track for the next couple of years to see if that trend is going down as was projected.”

She noted the significant investments in the district, such as renovating the high school and junior high, may have contributed to fewer families leaving the district.

Board member Chris Bohlen said he requested the topic to be brought to the board after a previous discussion about enrollment’s impact on high school scheduling.

“I really appreciate this information because it’s critical,” he said. “I think as a board, we’re going to have to look at this in terms of going forward.”

“One of the things we talked about with scheduling is that there are four variables: teachers, number of rooms, number of courses, and number of students,” Walters said. “We are not going to be able to have classes of seven, eight, nine or 10. Class sizes have to be 15 to 20.”

Coupled with the teacher shortage, high enrollment means small classes of below 15 students are out of the question.

Walters said this means the district is going to have to look at other options for providing learning opportunities than just the traditional format, such as the virtual learning platform UpSquad.

Twilight Academy and Saturday School will also be key, she added.

“We are going to have to think of learning differently over time and space,” she said. “I think if we do that, we can cover the issue with teacher shortage and space.”’

Bohlen said the board should begin discussing whether or not building more space onto the high school will be necessary because of the increasing enrollment.

He said that without the availability of non-traditional options, there would be no choice but to look at adding more space.

“What I really appreciate about this information is it gives us something to go on,” Bohlen said. “I think we were all surprised last year when we had 1,500 students… Now we have to focus and have some serious discussion on what it means.”

KANKAKEE — A 28-year-old male suffered non-life threatening injuries after he was shot in a parking lot in the 200 block of South Schuyler Avenue early Sunday morning.

The shooting occurred at approximately 1:45 a.m., Kankakee Police said in a release.

Officers located the victim in the parking lot. He was transported to an area hospital, police said.

It is believed the victim had left one of the local bars prior to the shooting, police said.

A suspect vehicle was seen fleeing the scene after the shooting, police said.

Investigators believe that several people saw the shooting but have not contacted the police, according to police.

The shooting occurred three hours after the annual Merchant Street MusicFest had concluded. It is staged in the Harold and Jean Miner Festival Square located in the 100 block of East Merchant Street.

“We had a great MusicFest,” Curtis said.

“If it wasn’t the most successful MusicFest we’ve ever had, it was one of the best. And for this to happen after the fest concluded it has made me angry, extremely angry.”

Curtis said this shooting incident has made him as angry as he has been for a long time.

He noted behavior at the event was fantastic and the city had extra security on hand, based on incidents such as the Highland Park shooting, which occurred July 4 during the village’s annual Fourth of July parade.

“My disgust is this shooting will overshadow everything that was positive about this year’s MusicFest,” Curtis said.

“I heard nothing but great things about what is happening here all weekend and then this happened.”

The $281,381 deficit is due to $650,601 on capital items from bond proceeds that were taken last year, Romo said as he went over the budget with the commissioners.

“When you remove the bond spending, we actually have a surplus from operations of $369,220,” Romo said.

Among those capital projects is a Challenge Course geared toward teens and young adults, Executive Director Dr. Ed Piatt said.

The course allows a person a whole body workout — challenging strength, endurance, agility and balance in a completely safe environment.

The course’s equipment is budgeted for $148,744. Piatt said the tentative schedule for installation will be late fall to early spring. It will be located in the northwest part of Perry Farm.

Another $171,209 has been approved by commissioners to replace the roofs of five of the six buildings at Perry Farm.

The board earmarked $60,000 for a feasibility study for building an indoor recreation building at Perry Farm.

“It is obvious we need a recreation center, but some may ask, ‘Why do you need to spend $60,000 on a study if you already need a building?’” Romo said.

“The consultants who do the feasibility study will look at the feedback from the park district’s Comprehensive Plan, get additional community input and design the building based on everything gathered.

“They will come up with the cost to build based on the community needs, as well as how much money will be made or lost on running the facility. Based upon those items we can get a better idea on what we could afford.”

Romo said during Wednesday’s board meeting that the district needs to do a better job with financial planning than in the past. That includes a forward looking capital needs plan to help determine costs for repairing and replacing current facilities and equipment.

That also means looking at current programming to get an idea of adding and discontinuing programs.

“We have to make better business decisions,” Romo said.