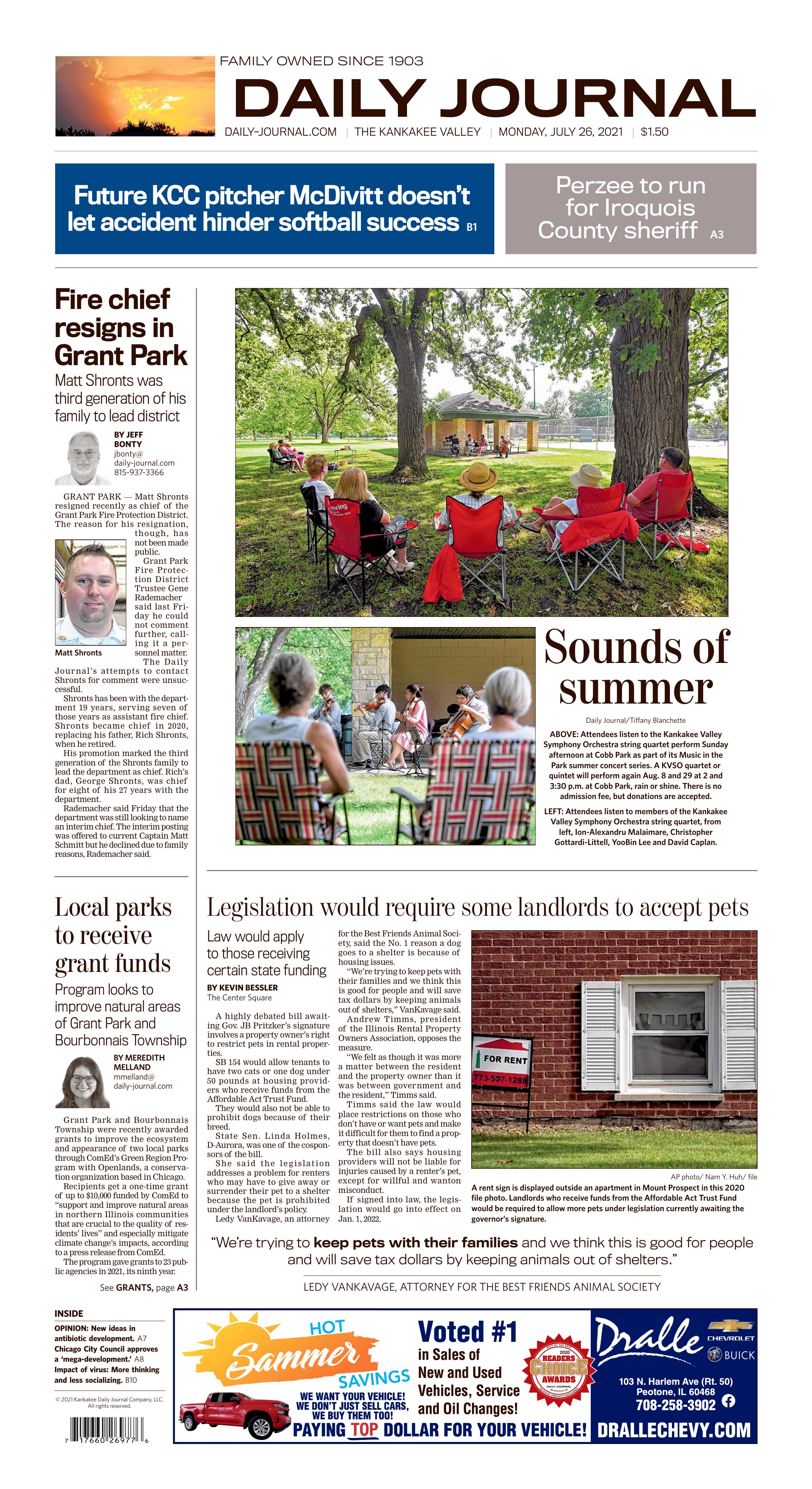 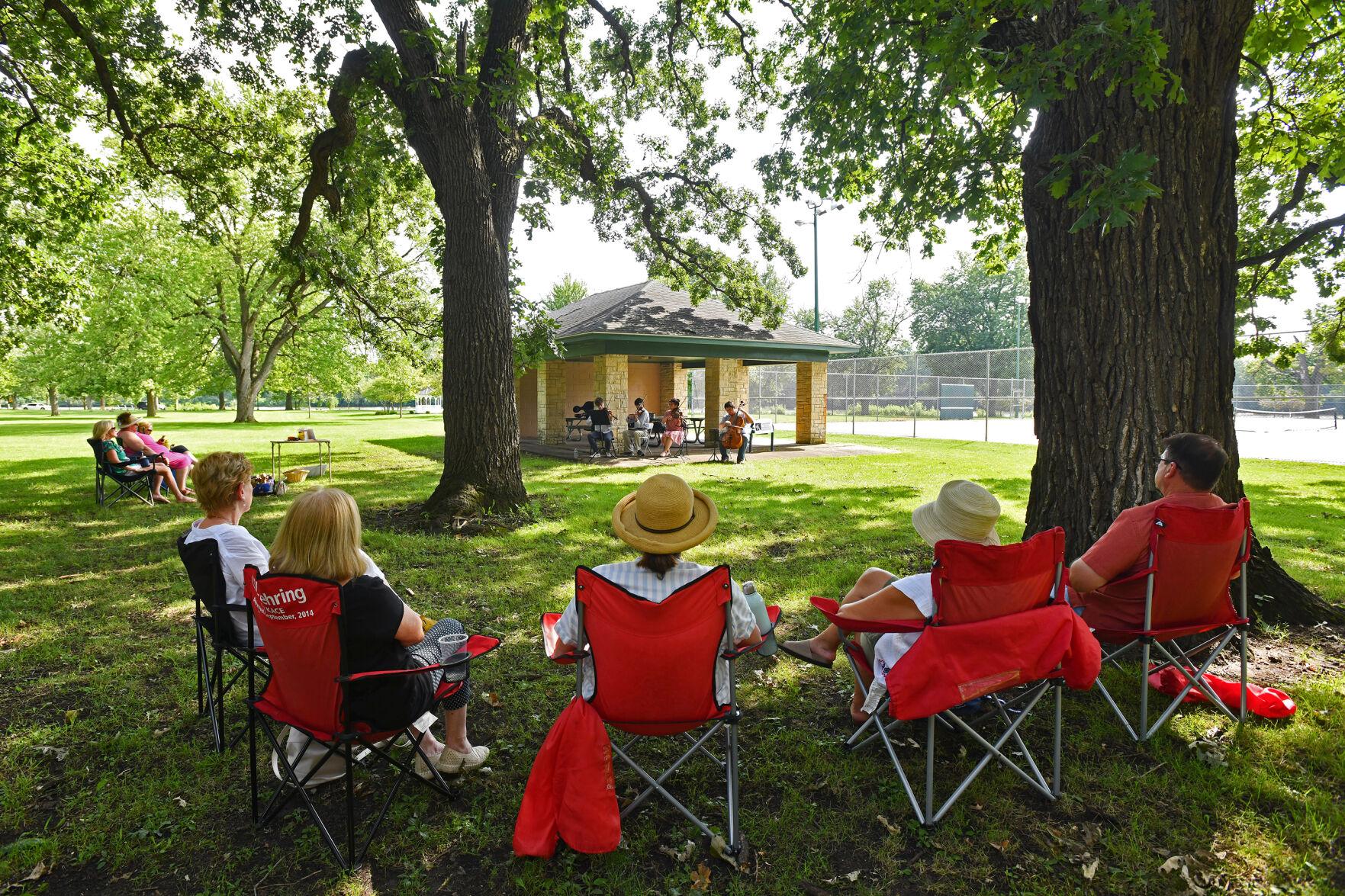 Attendees listen to the Kankakee Valley Symphony Orchestra string quartet perform Sunday afternoon at Cobb Park as part of its Music in the Park summer concert series. A KVSO quartet or quintet will perform again Aug. 8 and 29 at 2 and 3:30 p.m. at Cobb Park, rain or shine. There is no admission fee, but donations are accepted. 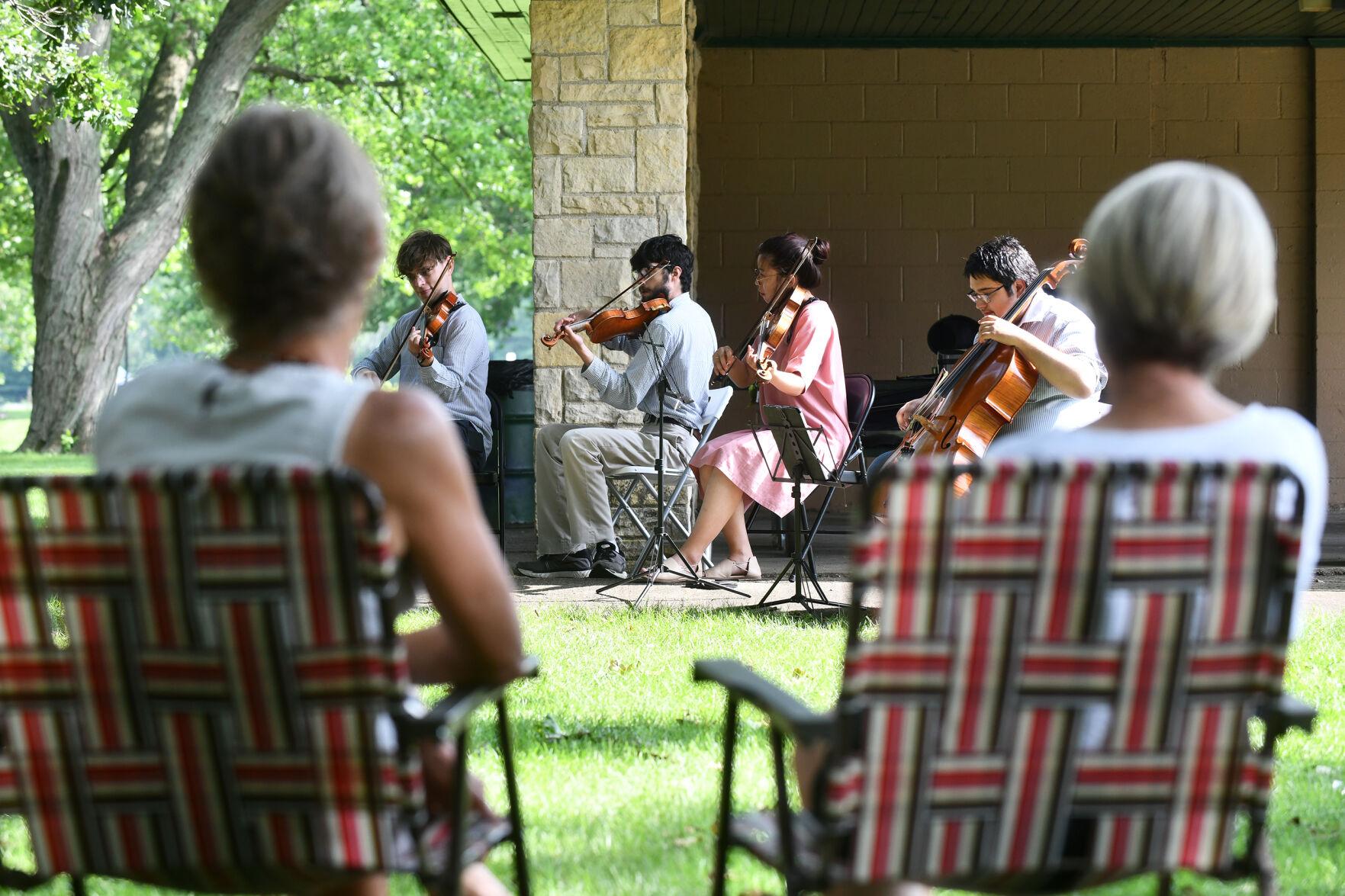 A rent sign is displayed outside an apartment in Mount Prospect in this 2020 file photo. Landlords who receive funds from the Affordable Act Trust Fund would be required to allow more pets under legislation currently awaiting the governor’s signature.

SB 154 would allow tenants to have two cats or one dog under 50 pounds at housing providers who receive funds from the Affordable Act Trust Fund.

They would also not be able to prohibit dogs because of their breed.

State Sen. Linda Holmes, D-Aurora, was one of the cosponsors of the bill.

She said the legislation addresses a problem for renters who may have to give away or surrender their pet to a shelter because the pet is prohibited under the landlord’s policy.

Ledy VanKavage, an attorney for the Best Friends Animal Society, said the No. 1 reason a dog goes to a shelter is because of housing issues.

“We’re trying to keep pets with their families and we think this is good for people and will save tax dollars by keeping animals out of shelters,” VanKavage said.

Timms said the law would place restrictions on those who don’t have or want pets and make it difficult for them to find a property that doesn’t have pets.

The bill also says housing providers will not be liable for injuries caused by a renter’s pet, except for willful and wanton misconduct.

GRANT PARK — Matt Shronts resigned recently as chief of the Grant Park Fire Protection District. The reason for his resignation, though, has not been made public.

Shronts has been with the department 19 years, serving seven of those years as assistant fire chief. Shronts became chief in 2020, replacing his father, Rich Shronts, when he retired.

His promotion marked the third generation of the Shronts family to lead the department as chief. Rich’s dad, George Shronts, was chief for eight of his 27 years with the department.

Rademacher said Friday that the department was still looking to name an interim chief. The interim posting was offered to current Captain Matt Schmitt but he declined due to family reasons, Rademacher said.

The Bourbonnais Township Park District plans to use its $3,500 grant to develop an arboretum in Willowhaven Park & Nature Center along the trail between the dog park and the center. {span} {/span}

Grant Park and Bourbonnais Township were recently awarded grants to improve the ecosystem and appearance of two local parks through ComEd’s Green Region Program with Openlands, a conservation organization based in Chicago.

Recipients get a one-time grant of up to $10,000 funded by ComEd to “support and improve natural areas in northern Illinois communities that are crucial to the quality of residents’ lives” and especially mitigate climate change’s impacts, according to a press release from ComEd.

The program gave grants to 23 public agencies in 2021, its ninth year.

“This is our first opportunity applying for this grant and we’re excited that we got it,” said Hollice Clark, executive director of the Bourbonnais Township Park District. “We’ll probably be applying for more.”

The district will use its $3,500 grant to develop an arboretum in Willowhaven Park & Nature Center along the trail between the dog park and the center, according to Clark.

“We’re going to plant the trees along the trail and they’ll be native to the area,” Clark said.

The trail will use climate-resilient trees to create bioswales, which are shallow, landscaped depressions designed to capture stormwater runoff and remove debris, and also feature flowers that will attract pollinators, according to the press release.

Grant Park will use the grant to move forward with renovating an existing gazebo and add a fountain, pollinator garden and related signage, according to a ComEd press release. A pollinator garden is a garden that is planted predominately with flowers that provide nectar or pollen for a wide range of pollinating insects.

Village Mayor Jamie Hawkins estimated the gazebo, which is on the grounds of Grant Park Community Park, is around 100 years old. The grant will help restore it to its original condition, she said.

Clark said the park district has until March 17, 2023, to finish the project, but is currently working on ordering trees and hopes to finish the arboretum trail sooner.

“Probably this time next year, this will be completed,” he said.

The Green Region Program has awarded over $1.5 million to northern Illinois municipalities, helping fund over 200 open-space projects and protecting approximately 1,000 acres of land.

More details can be found at Openlands.org/GreenRegion.

To develop an arboretum in Willowhaven Park & Nature Center with trees native to the area.

To renovate an existing gazebo and add a fountain, pollinator garden and related signage.