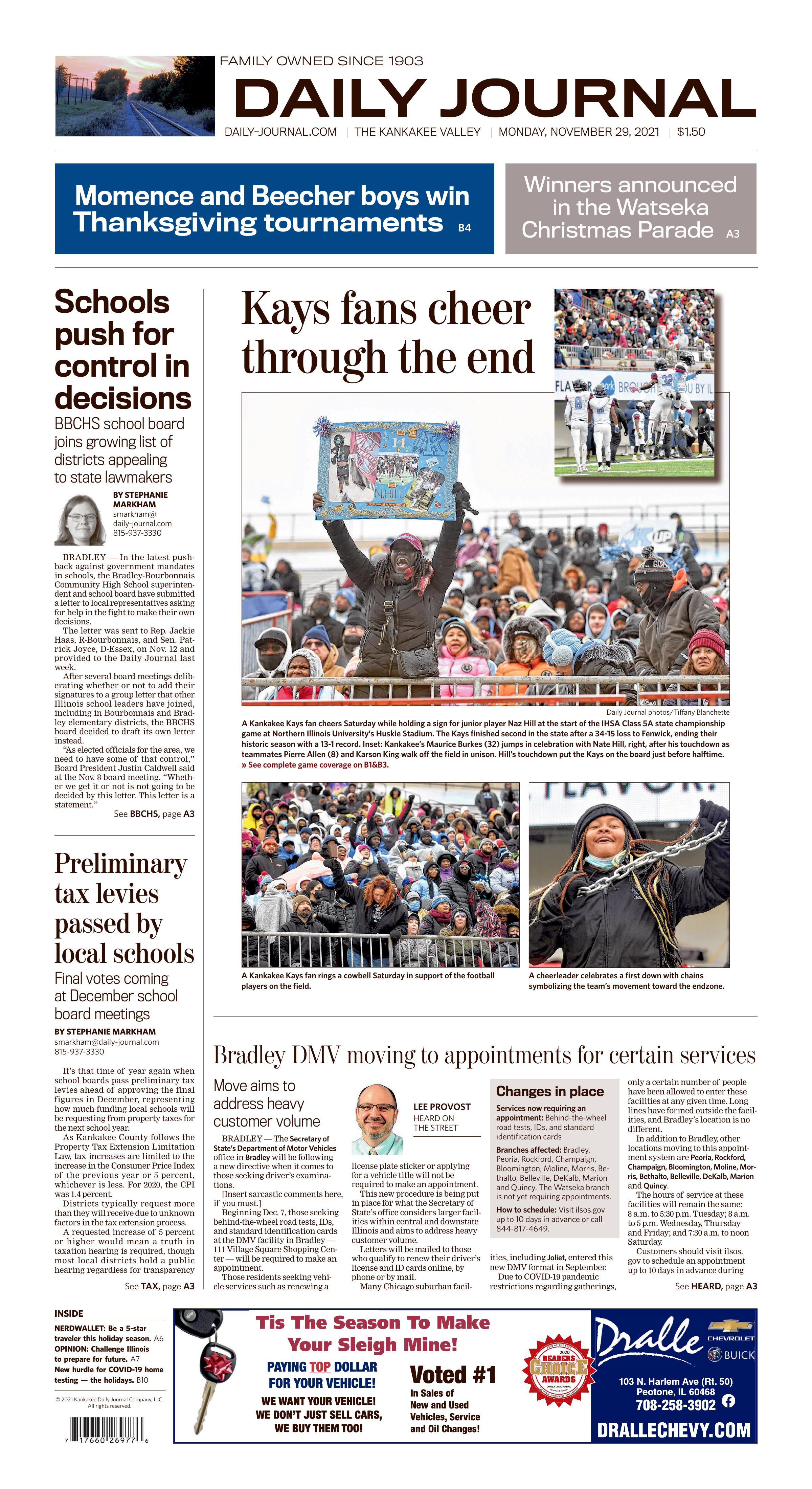 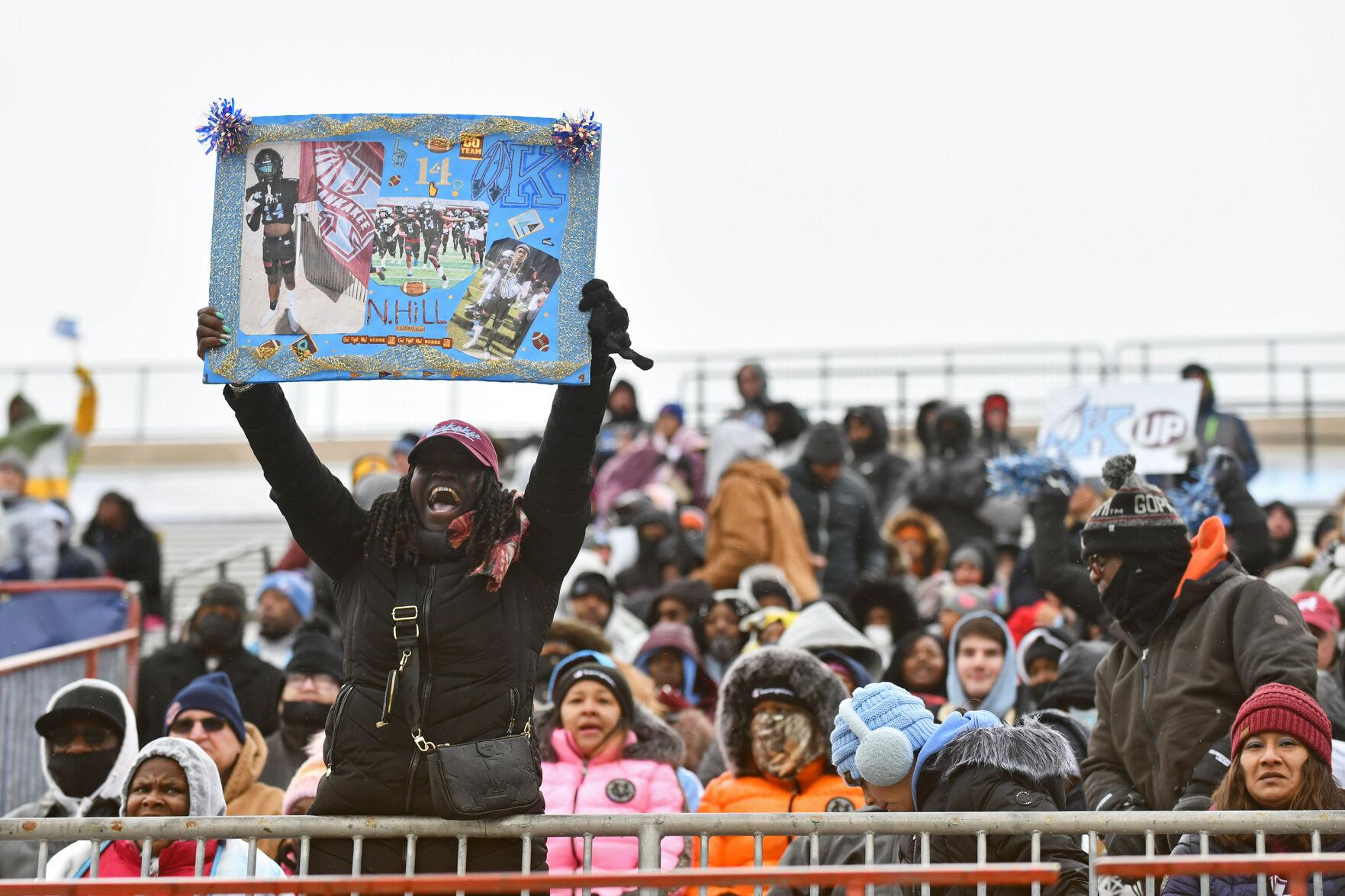 A Kankakee Kays fan cheers Saturday while holding a sign for junior player Naz Hill at the start of the IHSA Class 5A state championship game at Northern Illinois University’s Huskie Stadium. The Kays finished second in the state after a 34-15 loss to Fenwick, ending their historic season with a 13-1 record. MORE PHOTOS. 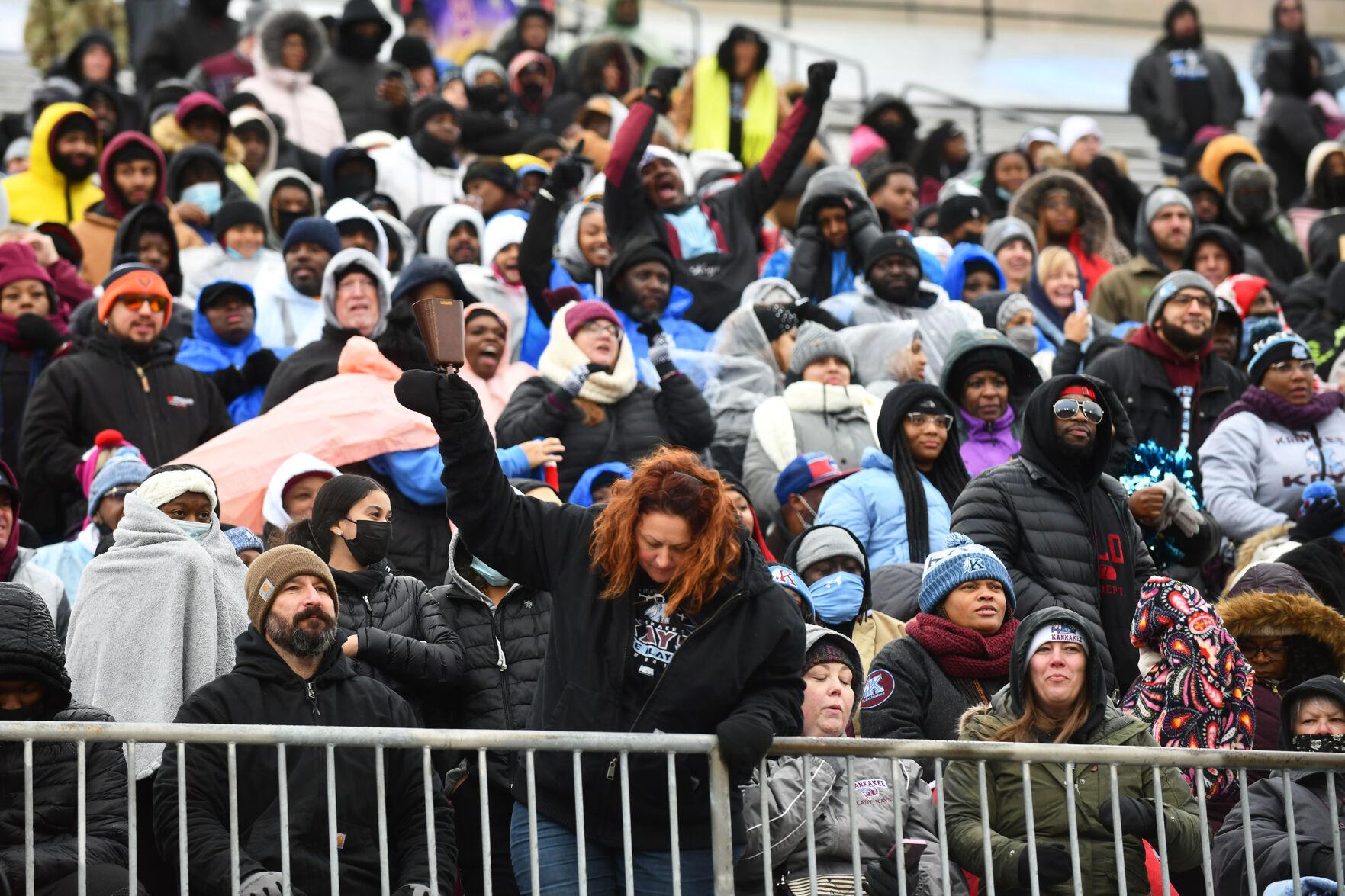 A Kankakee Kays fan rings a cow bell Saturday in support of the football players on the field during the Kays' IHSA Class 5A state championship game against Fenwick at Northern Illinois University's Huskie Stadium in DeKalb.

BRADLEY — The Secretary of State’s Department of Motor Vehicles office in Bradley will be following a new directive when it comes to those seeking driver’s examinations.

[Insert sarcastic comments here, if you must.]

Beginning Dec. 7, those seeking behind-the-wheel road tests, IDs, and standard identification cards at the DMV facility in Bradley — 111 Village Square Shopping Center — will be required to make an appointment.

Those residents seeking vehicle services such as renewing a license plate sticker or applying for a vehicle title will not be required to make an appointment.

This new procedure is being put in place for what the Secretary of State’s office considers larger facilities within central and downstate Illinois and aims to address heavy customer volume.

Letters will be mailed to those who qualify to renew their driver’s license and ID cards online, by phone or by mail.

Many Chicago suburban facilities, including Joliet, entered this new DMV format in September.

Due to COVID-19 pandemic restrictions regarding gatherings, only a certain number of people have been allowed to enter these facilities at any given time. Long lines have formed outside the facilities, and Bradley’s location is no different.

Customers should visit ilsos.gov to schedule an appointment up to 10 days in advance during this phase of the program. New appointment slots will be available each day at ilsos.gov.

The Secretary of State’s office is also partnering with the Chicago Lighthouse to provide an appointment hotline, which the public may call at 844-817-4649.

The Secretary of State’s announcement did not include the driver’s license facility in Watseka. The news release did note that the list of appointment-requirement facilities could grow to include additional locations.

Jesse White, Illinois Secretary of State, noted that senior citizens, military veterans, persons with disabilities and expectant mothers will be served as walk-ins at all of the designated-appointment facilities.

BRADLEY — In the latest pushback against government mandates in schools, the Bradley-Bourbonnais Community High School superintendent and school board have submitted a letter to local representatives asking for help in the fight to make their own decisions.

The letter was sent to Rep. Jackie Haas, R-Bourbonnais, and Sen. Patrick Joyce, D-Essex, on Nov. 12 and provided to the Daily Journal last week.

After several board meetings deliberating whether or not to add their signatures to a group letter that other Illinois school leaders have joined, including in Bourbonnais and Bradley elementary districts, the BBCHS board decided to draft its own letter instead.

“As elected officials for the area, we need to have some of that control,” Board President Justin Caldwell said at the Nov. 8 board meeting. “Whether we get it or not is not going to be decided by this letter. This letter is a statement.”

The BBCHS letter is titled “Locally-Elected School Boards Know Their Community Best” and signed by Superintendent Matt Vosberg and the District 307 School Board.

“Over the last decade we have seen decisions beginning to be made at the state and legislative levels that are slowly removing control from the local board level,” the letter states. “The Illinois Association of School Boards has posted a list of mandates on its website that totals 14 pages. Some mandates are very practical and necessary, but it’s difficult to implement all of them with fidelity. The list is so vast one struggles to stay current.”

“Moreover, why is it the responsibility of the locally elected officials to enforce these regulations with their school community that they may not believe to be beneficial for our students? Why should power for local education rest with a group of individuals that do not live in our community?” the letter asks. “We urge you to take a moment to reflect on these questions and reconsider some of the decisions you are taking away from us. We hope you can place trust in us as locally elected officials to make the right decisions for our students and our community.”

“The Illinois Association of School Boards has posted a list of mandates on its website that totals 14 pages. ... The list is so vast one struggles to stay current.”

It’s that time of year again when school boards pass preliminary tax levies ahead of approving the final figures in December, representing how much funding local schools will be requesting from property taxes for the next school year.

As Kankakee County follows the Property Tax Extension Limitation Law, tax increases are limited to the increase in the Consumer Price Index of the previous year or 5 percent, whichever is less. For 2020, the CPI was 1.4 percent.

Districts typically request more than they will receive due to unknown factors in the tax extension process.

A requested increase of 5 percent or higher would mean a truth in taxation hearing is required, though most local districts hold a public hearing regardless for transparency purposes at the same time they pass the levy.

Here’s a rundown of a few of the preliminary tax levies for local school districts.

Finance Director Nicole McCarty presented the tentative levy at a Nov. 16 board meeting, and it was approved by the board.

Bradley Elementary District 61 will request $10.8 million in the 2021 tax year, while the expectation is that $10.5 million will be received, an increase of about $220,000 over last year, according to the presentation.

The final levy will be up for vote at the Dec. 9 board meeting.

Dennis Crawford, chief school business official, presented the tentative levy at a Nov. 16 board meeting. It was approved by the board.

Crawford explained that districts inflate their levy requests in case the county assessor’s estimate of new property is low; since the levy is calculated based on the extension from last year, asking for less will mean less is available in the future.

“We balloon the levy, asking for more than we’ll actually get,” he said. “If you don’t ask for enough, you won’t get enough. It’s easier to ask for more.”

The final levy will be up for vote at the Dec. 14 meeting.

Nicole Terrell-Smith, assistant superintendent of business services, presented the tentative levy at a Nov. 8 board meeting. It was approved by the board.

Actual extensions will be determined by final property value calculations and CPI, she explained.

“With the proposed tax levy, we’re looking at an additional $280,000 in revenues from taxpayers above what the extension was for last year, and that again is capped at that 1.4 percent,” she said.

Final approval will be requested at the Dec. 13 board meeting.

“Kankakee is a tax cap county, meaning we will not get any more taxes besides what we get for an increase in our CPI, which for this year is 1.4 [percent], and any new property,” Hammond said.

The county assessor’s office estimated right around $9 million in new property, a marked increase from past values, he added.

“In the past, we are usually between $3 million and $5 million,” he said. “Because of that, [equalized assessed value] has gone up, and we’re actually in a good environment with our EAV.”

EAV is another figure used to determine how much funding schools will get in property taxes.

The proposed levy will be up for vote at the Dec. 13 meeting.

A look at preliminary tax levies for local school districts: 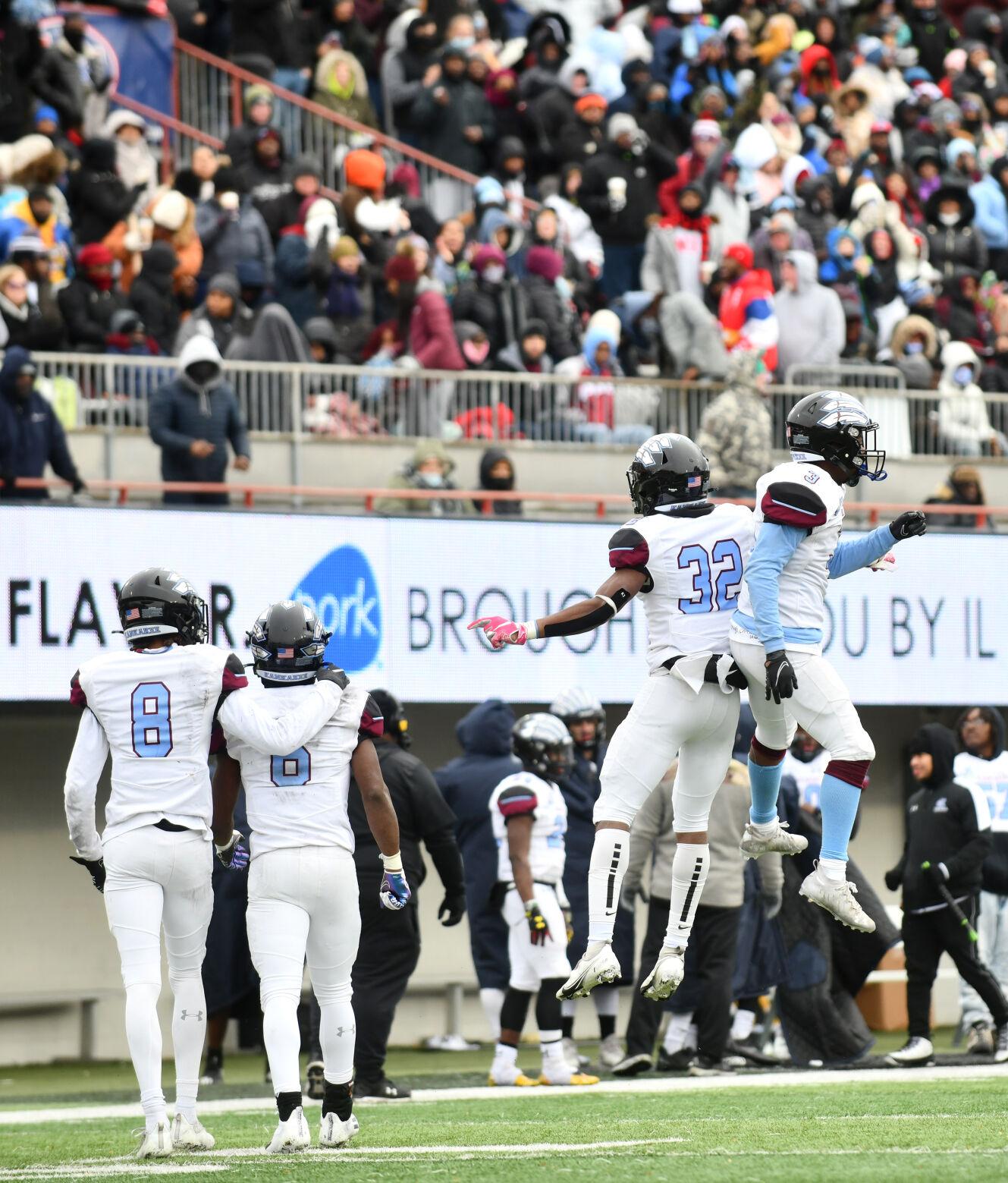 Kankakee’s Maurice Burkes (32) jumps in celebration with Nate Hill, right, after his touchdown as teammates Pierre Allen (8) and Karson King walk off the field in unison after Saturday’s game. Hill’s touchdown put the Kays on the board just before halftime. 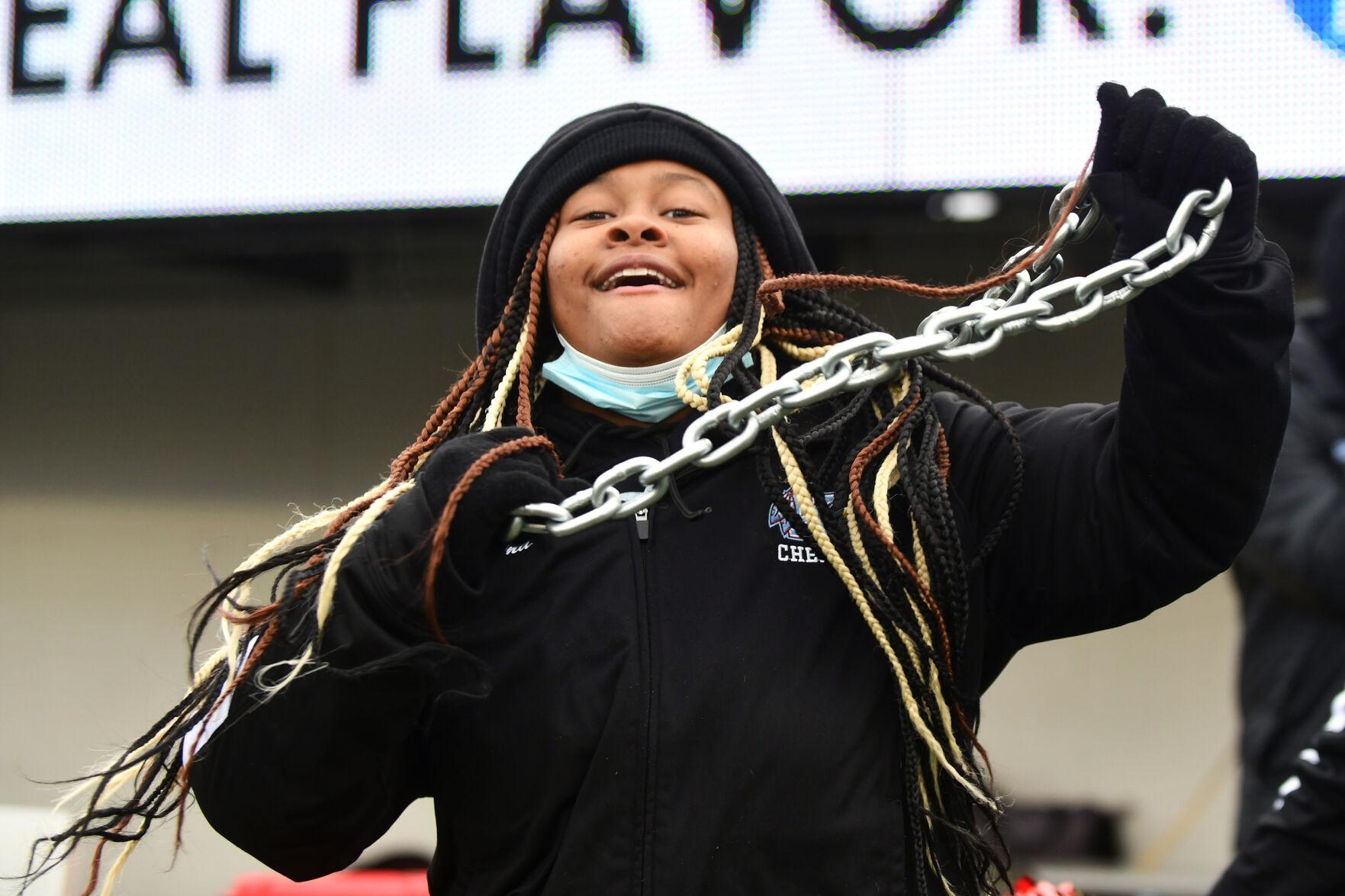 A Kankakee cheerleader celebrates a Kays first down with symbolic chains during Saturday’s matchup.