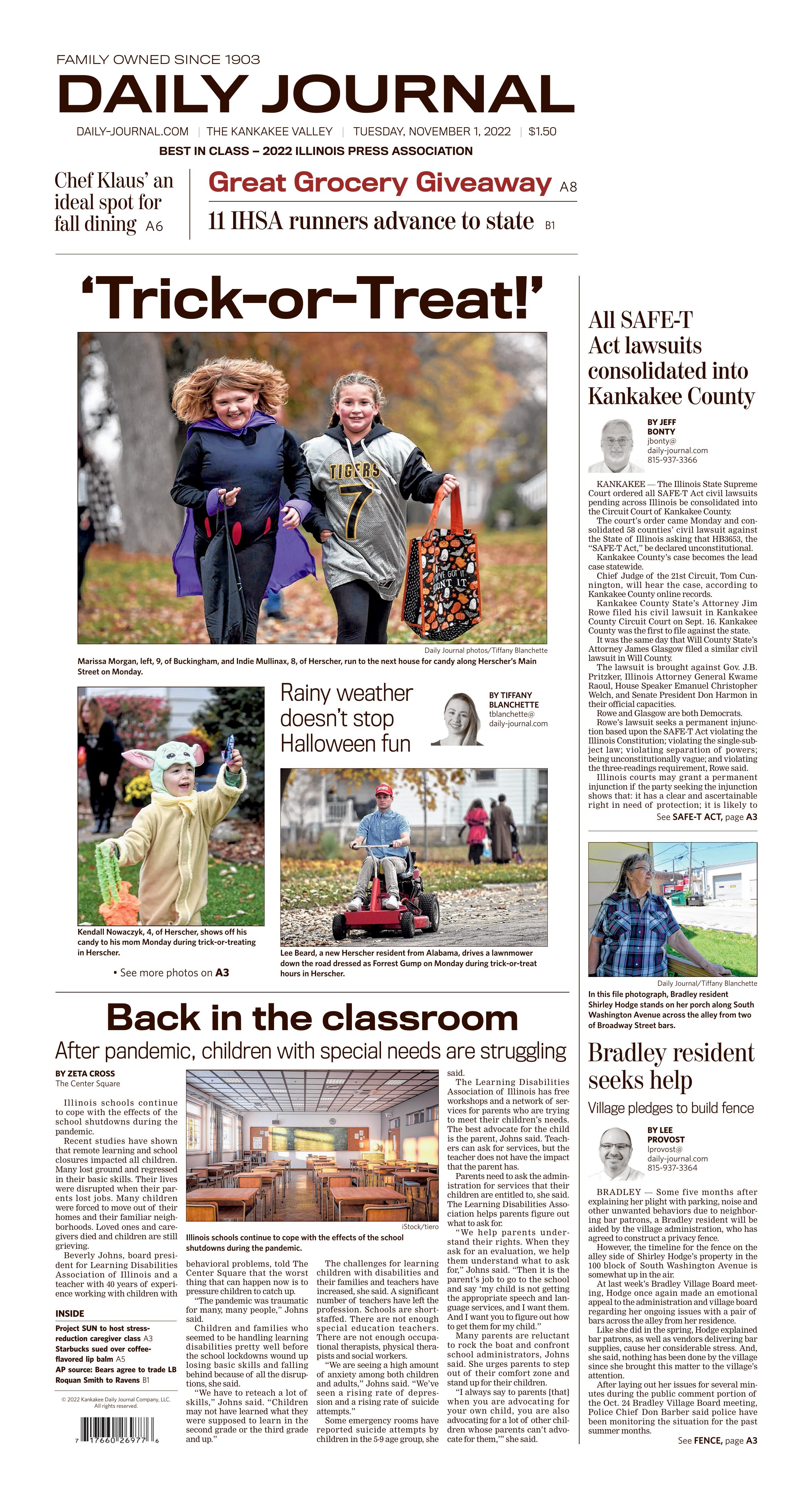 Marissa Morgan, left, 9, of Buckingham, and Indie Mullinax, 8, of Herscher, run to the next house for candy along Herscher’s Main Street on Monday.

Kendall Nowaczyk, 4, of Herscher, shows off his candy to his mom Monday during trick-or-treating in Herscher.

Lee Beard, a new Herscher resident from Alabama, drives a lawnmower down the road dressed as Forrest Gump on Monday during trick-or-treat hours in Herscher. MORE PHOTOS.

Gavin Mosley, 19, of Herscher, lurks slowly through the streets of Herscher dressed as Michael Myers on Monday as he takes his younger brother, Mikah Ling, 7, at left, trick-or-treating. MORE PHOTOS.

Oakley Berns, 6, of Herscher, runs to the next house while trick-or-treating with his family in Herscher on Monday.

Trick-or-treaters in Herscher Monday afternoon were not deterred by scattered rain showers and still made the rounds in Halloween costumes to fill up on candy.

Illinois
Back in the classroom after the pandemic, children with special needs are struggling
iStock/tiero

Illinois schools continue to cope with the effects of the school shutdowns during the pandemic.

Illinois schools continue to cope with the effects of the school shutdowns during the pandemic.

Recent studies have shown that remote learning and school closures impacted all children. Many lost ground and regressed in their basic skills. Their lives were disrupted when their parents lost jobs. Many children were forced to move out of their homes and their familiar neighborhoods. Loved ones and caregivers died and children are still grieving.

Beverly Johns, board president for Learning Disabilities Association of Illinois and a teacher with 40 years of experience working with children with behavioral problems, told The Center Square that the worst thing that can happen now is to pressure children to catch up.

“The pandemic was traumatic for many, many people,” Johns said.

Children and families who seemed to be handling learning disabilities pretty well before the school lockdowns wound up losing basic skills and falling behind because of all the disruptions, she said.

“We have to reteach a lot of skills,” Johns said. “Children may not have learned what they were supposed to learn in the second grade or the third grade and up.”

Some emergency rooms have reported suicide attempts by children in the 5-9 age group, she said.

The Learning Disabilities Association of Illinois has free workshops and a network of services for parents who are trying to meet their children’s needs. The best advocate for the child is the parent, Johns said. Teachers can ask for services, but the teacher does not have the impact that the parent has.

Parents need to ask the administration for services that their children are entitled to, she said. The Learning Disabilities Association helps parents figure out what to ask for.

“We help parents understand their rights. When they ask for an evaluation, we help them understand what to ask for,” Johns said. “Then it is the parent’s job to go to the school and say ‘my child is not getting the appropriate speech and language services, and I want them. And I want you to figure out how to get them for my child.”

Many parents are reluctant to rock the boat and confront school administrators, Johns said. She urges parents to step out of their comfort zone and stand up for their children.

“I always say to parents [that] when you are advocating for your own child, you are also advocating for a lot of other children whose parents can’t advocate for them,’” she said.

The court’s order came Monday and consolidated 58 counties’ civil lawsuit against the State of Illinois asking that HB3653, the “SAFE-T Act,” be declared unconstitutional.

Chief Judge of the 21st Circuit, Tom Cunnington, will hear the case, according to Kankakee County online records.

It was the same day that Will County State’s Attorney James Glasgow filed a similar civil lawsuit in Will County.

Rowe and Glasgow are both Democrats.

Illinois courts may grant a permanent injunction if the party seeking the injunction shows that: it has a clear and ascertainable right in need of protection; it is likely to suffer irreparable harm without relief; no adequate remedy at law exists.

Pritzker signed the bill into law last year, which will abolish cash bail on Jan. 1, 2023. It makes Illinois the first state in the country to do so.

Pritzker has said the legislation supports police departments with funds and equipment such as body cameras, and that the elimination of cash bail will prevent low-level criminals from sitting in jail for months.

Proponents of the SAFE-T Act note the legislation is based in solving the root causes of violence.

“It dares to imagine a world, that actually existed up through the 1970s, where people who never posed a threat to others weren’t rounded up and thrown in jail,” State Sen. Robert Peters, D-Chicago, a driving force behind the legislation, told The Center Square in September.

“My team and I understand the importance of this litigation and we are honored to work alongside a select group of other State’s Attorneys’ Offices in challenging the constitutionality of HB3653, on behalf of nearly 60 counties throughout Illinois,” Rowe said in a release.

“These are important issues and we look forward to addressing them in court.”

“We will lead the litigation efforts alongside a team of state’s attorneys and their assistants from five other State’s Attorney’s offices: Will, Kendall, Vermilion, Sangamon and McHenry,” Rowe said in the statement.

These six counties (including Kankakee County) have been designated as Special Counsel to represent every county that has filed thus far, Rowe said in the statement.

“Any ruling entered by the circuit court will be binding upon the other counties who have filed,” Rowe said in the statement.

Rowe, Kankakee County State’s Attorney since December 2016, noted when the lawsuit was filed in September every amendment to the state’s constitution has been accomplished by referendum vote of the people.

Amendments to the current bail section of the constitution were adopted by referendum vote in 1982, Rowe said.

In 2014, voters approved amendments to the Victim’s Rights Act [Article 1, Section 8.1], also by referendum vote of the people, he added.

Rowe argues legislators who voted for the SAFE-T Act in January 2021 “ignored this process and attempted to amend the Illinois Constitution by denying voters the right to decide and instead placing the decision unconstitutionally and solely in the hands of legislators.”

“The SAFE-T Act has effectively amended this section of the Illinois Constitution without a referendum vote of the people,” he said when he filed the lawsuit Sept. 16.

“The Legislature does not have that power. This lawsuit and the Illinois Constitution beg our legislators to do what is right and follow the process: give the people their right to vote.”

In this file photograph, Bradley resident Shirley Hodge stands on her porch along South Washington Avenue across the alley from two of Broadway Street bars.

BRADLEY — Some five months after explaining her plight with parking, noise and other unwanted behaviors due to neighboring bar patrons, a Bradley resident will be aided by the village administration, who has agreed to construct a privacy fence.

However, the timeline for the fence on the alley side of Shirley Hodge’s property in the 100 block of South Washington Avenue is somewhat up in the air.

At last week’s Bradley Village Board meeting, Hodge once again made an emotional appeal to the administration and village board regarding her ongoing issues with a pair of bars across the alley from her residence.

Like she did in the spring, Hodge explained bar patrons, as well as vendors delivering bar supplies, cause her considerable stress. And, she said, nothing has been done by the village since she brought this matter to the village’s attention.

After laying out her issues for several minutes during the public comment portion of the Oct. 24 Bradley Village Board meeting, Police Chief Don Barber said police have been monitoring the situation for the past summer months.

He said the village has not received any complaints about the patrons or suppliers to the taverns, Donald & Debbie’s Doghouse, 228 W. Broadway St., and D.I.L.L.I.G.A.F.’s, 226 W. Broadway St.

After the discussion, Mayor Mike Watson said the village would erect a privacy fence along the alley which would help shield the north-facing potion of Hodge’s property.

The commitment by Watson seemed to bring some relief to Hodge.

There was one catch, however, to the pending relief. Because Bradley is in the midst of a village-wide alleyway reconstruction project, the mayor said the fence would not be put in place until the alley has been dug out, rebuilt and resurfaced.

Hodge asked, when would that be completed? The mayor could not answer that question. He was unsure as to what area the projected 10-year alley construction program would take on in 2023.

The alley program is only in its second year in 2022.

That response did not seem to bring Hodge much relief.

Following the meeting, Watson said Hodge is going to need to demonstrate some patience. He said he certainly doesn’t want the taxpayers to pay for a fence and then have it taken down and put back in place. He would prefer it to be put in place when the alley is dealt with.