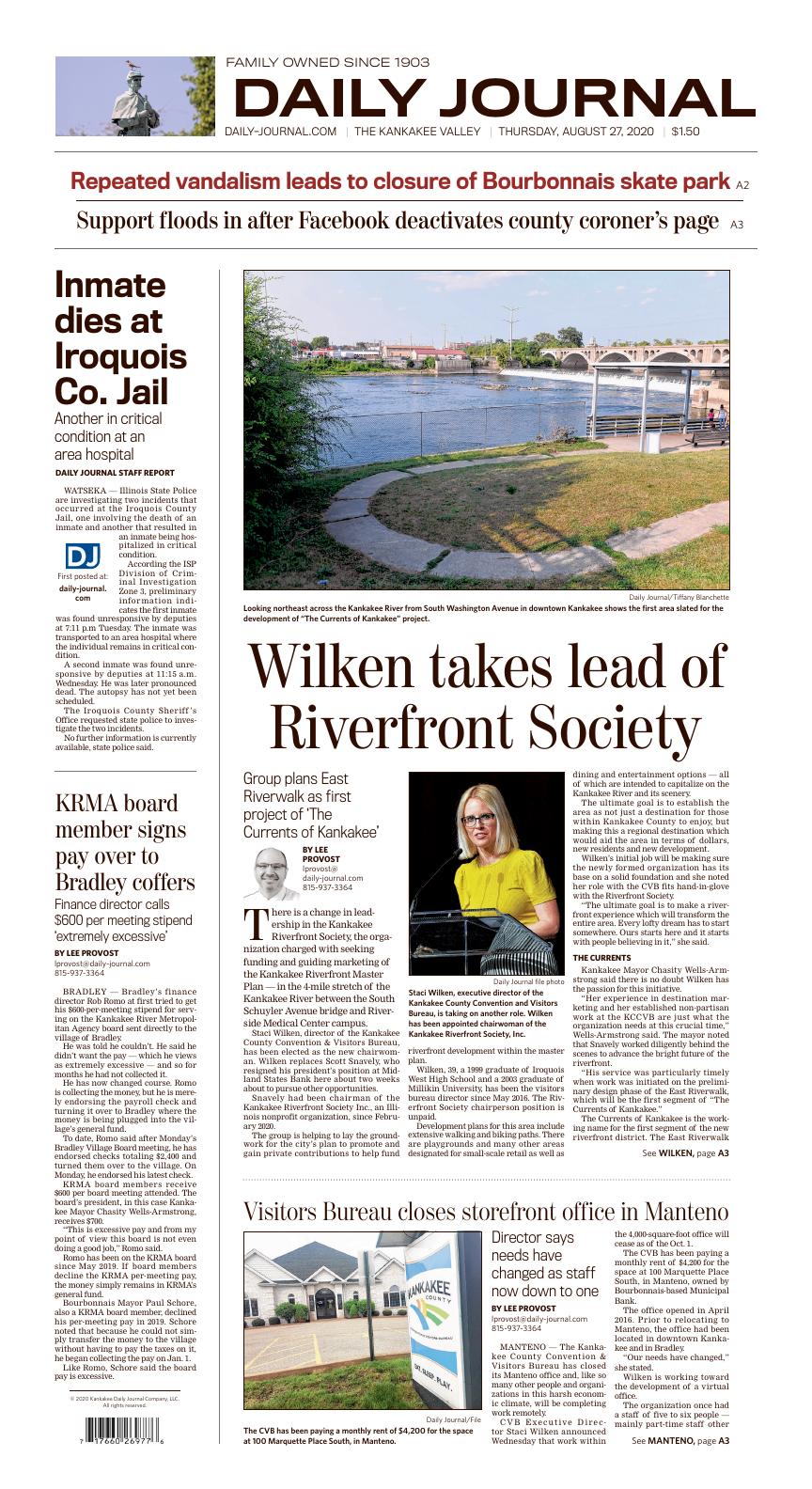 Staci Wilken, director of the Kankakee County Convention & Visitors Bureau, has been elected as the new chairwoman. Wilken replaces Scott Snavely, who resigned his president’s position at Midland States Bank here about two weeks ago to pursue other opportunities.

Snavely had been chairman of the Kankakee Riverfront Society Inc., an Illinois nonprofit organization, since February 2020.

The group is helping to lay the groundwork for the city’s plan to promote and gain private contributions to help fund riverfront development within the master plan.

Wilken, 39, a 1999 graduate of Iroquois West High School and a 2003 graduate of Millikin University, has been the visitors bureau director since May 2016. The Riverfront Society chairperson position is unpaid.

Development plans for this area include extensive walking and biking paths. There are playgrounds and many other areas designated for small-scale retail as well as dining and entertainment options — all of which are intended to capitalize on the Kankakee River and its scenery.

The ultimate goal is to establish the area as not just a destination for those within Kankakee County to enjoy, but making this a regional destination which would aid the area in terms of dollars, new residents and new development.

Wilken’s initial job will be making sure the newly formed organization has its base on a solid foundation and she noted her role with the CVB fits hand-in-glove with the Riverfront Society.

“The ultimate goal is to make a riverfront experience which will transform the entire area. Every lofty dream has to start somewhere. Ours starts here and it starts with people believing in it,” she said.

Kankakee Mayor Chasity Wells-Armstrong said there is no doubt Wilken has the passion for this initiative.

“Her experience in destination marketing and her established non-partisan work at the KCCVB are just what the organization needs at this crucial time,” Wells-Armstrong said. The mayor noted that Snavely worked diligently behind the scenes to advance the bright future of the riverfront.

“His service was particularly timely when work was initiated on the preliminary design phase of the East Riverwalk, which will be the first segment of “The Currents of Kankakee.”

The Currents of Kankakee is the working name for the first segment of the new riverfront district. The East Riverwalk is planned from the southeast corner of South Schuyler Avenue and East River Street on three properties that the city expects to acquire yet this year.

The East Riverwalk is expected to include a gateway plaza, a boat dock, a canoe/kayak pull-out, a small parking lot and other improvements. The riverwalk park design is not yet complete. A preliminary design is expected to be delivered by Hitchcock Design by year’s end.

Wilken noted that in a time where there may not be much to get excited about, the entirety of the riverwalk project can provide the region a boost.

“This development can be a lasting project — a legacy project — for generations to come,” she said.

Regarding her appointment as chairwoman, Wilken said, “I don’t know if surprised is the right word. I think more humbled and honored that the board trusts me to be in this position. I appreciate this vote of confidence. This is a perfect marriage of my job and this volunteer position.”

She said the riverfront project will help Kankakee County differentiate itself from other communities.

“My questions to the community are this: Who wants to get involved in this? Who wants to contribute to this? This is a great way to leave a legacy, something that withstands the test of time. It’s time to get this project going.”

The CVB has been paying a monthly rent of $4,200 for the space at 100 Marquette Place South, in Manteno.

MANTENO — The Kankakee County Convention & Visitors Bureau has closed its Manteno office and, like so many other people and organizations in this harsh economic climate, will be completing work remotely.

CVB Executive Director Staci Wilken announced Wednesday that work within the 4,000-square-foot office will cease as of the Oct. 1.

The CVB has been paying a monthly rent of $4,200 for the space at 100 Marquette Place South, in Manteno, owned by Bourbonnais-based Municipal Bank.

The office opened in April 2016. Prior to relocating to Manteno, the office had been located in downtown Kankakee and in Bradley.

“Our needs have changed,” she stated.

Wilken is working toward the development of a virtual office.

The organization once had a staff of five to six people — mainly part-time staff other than Wilken — but due to the loss of the Chicago Bears summer camp, the dissolution of Zagster and the Bike 609 bike share program, as well as the impact of the COVID-19 pandemic, the need for such a large space is no longer warranted, Wilken said.

“There have certainly been decreases in travel and tourism due to what has been taking place. The (CVB) board has discussed this for the past four to five months. This board has had to make some hard decisions,” she said. “We’ve certainly had a lot of good memories there. We are not alone when it comes to closing an office.”

Wilken said there are some things which are just out of the control of an organization and this is one example.

“Maybe by closing one chapter and opening a new one something great will emerge. We are certainly not the only organization or business which is reinventing itself right now,” she said.

CVB board president Mayor Chasity Wells-Armstrong said the board has supported Wilken every step of the way, but “unfortunately with the uncertainty ahead we have been tasked with making some tough decisions.”

Wilken said, “The loss of employees, and now the visitor center, breaks my heart. Like so many in the travel and tourism industry, my team devoted 40-plus hours a week to promoting Kankakee County as a destination.”

Wilken noted which her office location will change, her focus will not.

“My job is to continue telling our story and like so many, I can reinvent where I do that.”

WATSEKA — Illinois State Police are investigating two incidents that occurred at the Iroquois County Jail, one involving the death of an inmate and another that resulted in an inmate being hospitalized in critical condition.

According the ISP Division of Criminal Investigation Zone 3, preliminary information indicates the first inmate was found unresponsive by deputies at 7:11 p.m Tuesday. The inmate was transported to an area hospital where the individual remains in critical condition.

A second inmate was found unresponsive by deputies at 11:15 a.m. Wednesday. He was later pronounced dead. The autopsy has not yet been scheduled.

Rob Romo (right), Bradley’s finance director, is taking his monthly Kankakee River Metropolitan Agency payments and handing them over to Bradley where they are being placed into the village's general fund. Next to him is Dave Tyson, the agency’s executive director.

BRADLEY — Bradley’s finance director Rob Romo at first tried to get his $600-per-meeting stipend for serving on the Kankakee River Metropolitan Agency board sent directly to the village of Bradley.

He was told he couldn’t. He said he didn’t want the pay — which he views as extremely excessive — and so for months he had not collected it.

He has now changed course. Romo is collecting the money, but he is merely endorsing the payroll check and turning it over to Bradley where the money is being plugged into the village’s general fund.

To date, Romo said after Monday’s Bradley Village Board meeting, he has endorsed checks totaling $2,400 and turned them over to the village. On Monday, he endorsed his latest check.

KRMA board members receive $600 per board meeting attended. The board’s president, in this case Kankakee Mayor Chasity Wells-Armstrong, receives $700.

“This is excessive pay and from my point of view this board is not even doing a good job,” Romo said.

Romo has been on the KRMA board since May 2019. If board members decline the KRMA per-meeting pay, the money simply remains in KRMA’s general fund.

Bourbonnais Mayor Paul Schore, also a KRMA board member, declined his per-meeting pay in 2019. Schore noted that because he could not simply transfer the money to the village without having to pay the taxes on it, he began collecting the pay on Jan. 1.

Like Romo, Schore said the board pay is excessive. 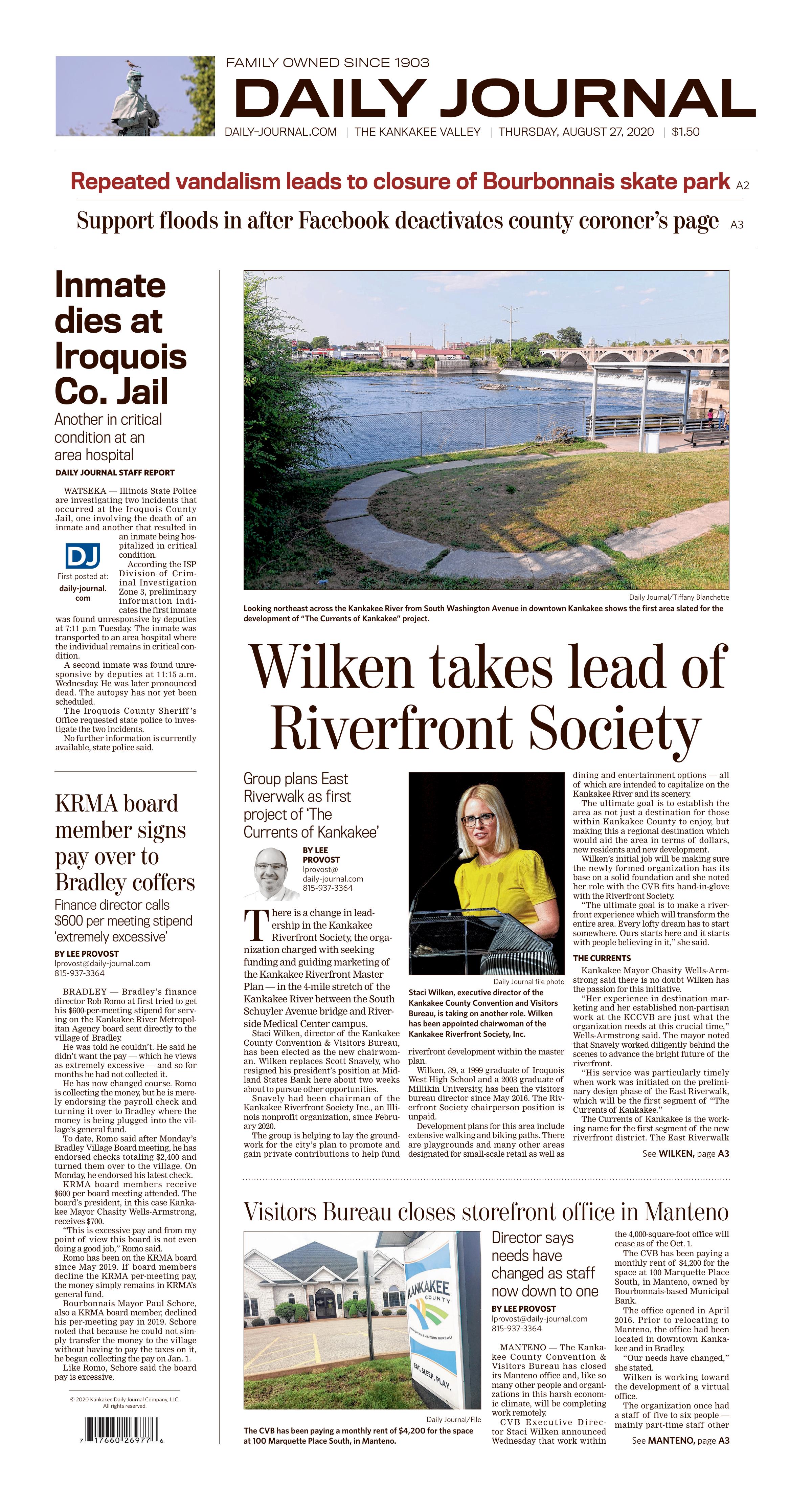