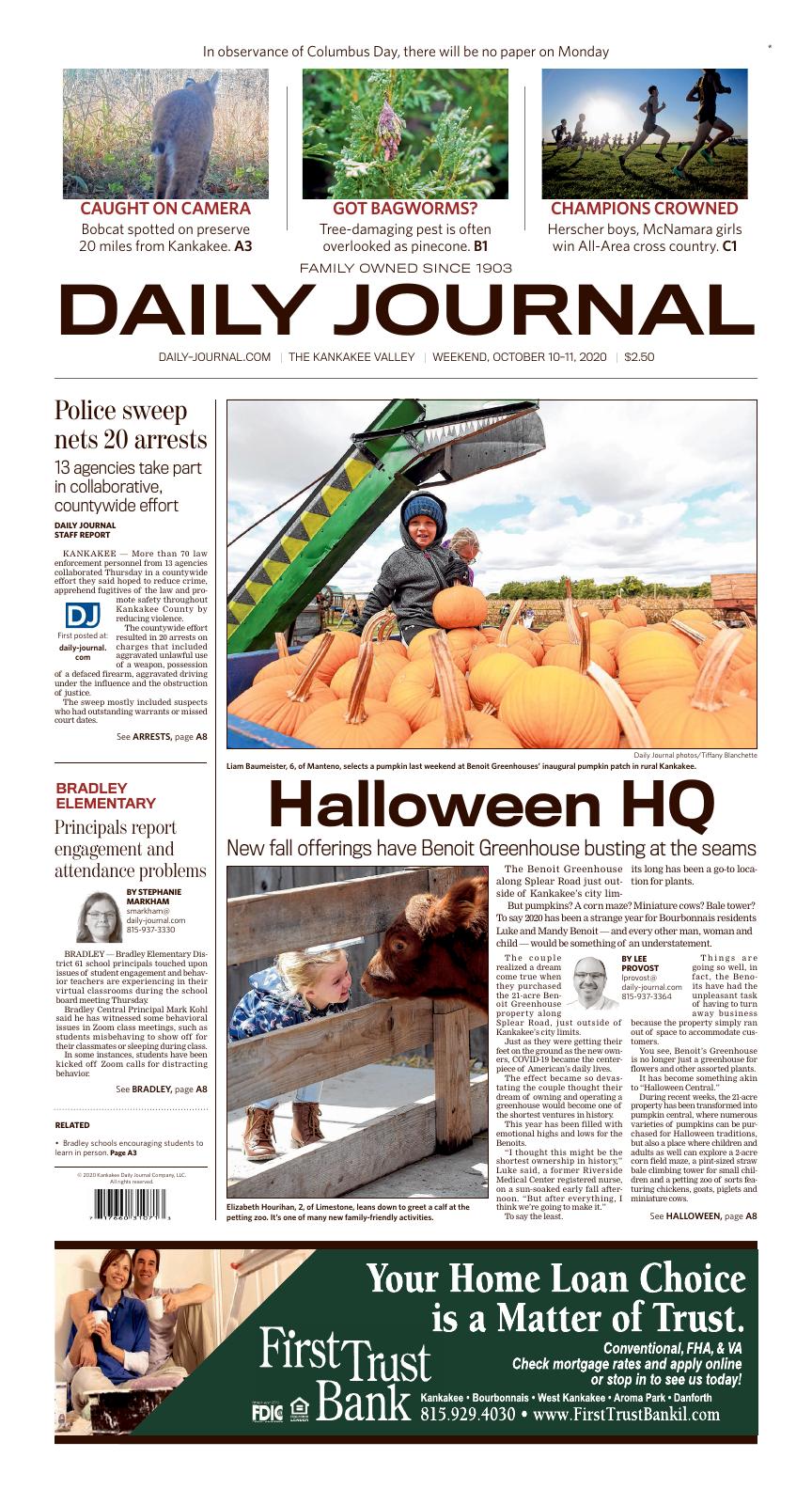 Elizabeth Hourihan, 2, of Limestone, leans down to greet a calf at the petting zoo last weekend at Benoit Greenhouses’ inaugural pumpkin patch in rural Kankakee.

KANKAKEE — The Benoit Greenhouse along Splear Road just outside of Kankakee’s city limits long has been a go-to location for plants.

But pumpkins? A corn maze? Miniature cows? Bale tower? To say 2020 has been a strange year for Bourbonnais residents Luke and Mandy Benoit — and every other man, woman and child — would be something of an understatement.

The couple realized a dream come true when they purchased the 21-acre Benoit Greenhouse property along Splear Road, just outside of Kankakee’s city limits.

Just as they were getting their feet on the ground as the new owners, COVID-19 became the centerpiece of American’s daily lives.

The effect became so devastating the couple thought their dream of owning and operating a greenhouse would become one of the shortest ventures in history.

This year has been filled with emotional highs and lows for the Benoits.

“I thought this might be the shortest ownership in history,” Luke said, a former Riverside Medical Center registered nurse, on a sun-soaked early fall afternoon. “But after everything, I think we’re going to make it.”

To say the least.

Things are going so well, in fact, the Benoits have had the unpleasant task of having to turn away business because the property simply ran out of space to accommodate customers.

You see, Benoit’s Greenhouse is no longer just a greenhouse for flowers and other assorted plants.

It has become something akin to “Halloween Central.”

During recent weeks, the 21-acre property has been transformed into pumpkin central, where numerous varieties of pumpkins can be purchased for Halloween traditions, but also a place where children and adults as well can explore a 2-acre corn field maze, a pint-sized straw bale climbing tower for small children and a petting zoo of sorts featuring chickens, goats, piglets and miniature cows.

And, to top it off, there is no charge for admission.

Oh, and they also sell pumpkins. Lots of pumpkins. Hundreds. Ranging in size from a few pounds to as much as 40 pounds.

The greenhouse became a spring retail for plants three years ago. However, when Luke and Mandy, both Bishop McNamara Catholic High School graduates, took the keys from his parents, Vince and Christine Benoit, they set out to add fall retail. Business is business no matter what season it takes place in.

“People were asking when would go retail for the fall,” said Luke, 41.

It was their goal in January to be offering pumpkins and other items in September. But COVID hit, and they weren’t sure what would become of their retail dream.

But family relations, Kevin and Jim Benoit, were growing pumpkins in their 20-acre farm along Lowe Road for the store. They were committed. The only question was would COVID-related restrictions be lifted in time. Fortunately, they were, as the region’s positivity rate fell below guidelines established by the Illinois Department of Public Health.

Business has been booming ever since. The store is open from 9 a.m. to 5 p.m. Wednesday through Sunday. The fall pumpkin shop concludes its seasonal business at 5 p.m. Oct. 30, the day before Halloween.

On this particular Tuesday, much of the location was quiet. Mandy was working in the store, as her youngest son, Leo, 3, ran around. Luke was busy making sure everything else was in place for what promised to be a great week of business.

The pumpkin harvest has been strong this fall as a perfect growing — long stretches of dry weather — settled over the region. Wet weather promotes pumpkin rot.

Business has been so strong that a week ago some customers had to be turned away as the 80-vehicle parking lot was filled. There was no more room at the farm.

He noted business has been so strong they sought another pumpkin grower to satisfy the demand.

The couple added a two-rim, pop-a-shot basketball game. There is also swing set for youngsters. Mandy said the ideas they have seemingly are endless.

“People sit around and enjoy the day. I suppose some might be here for an hour or so, but they just love the setting,” Mandy said.

Whatever has happened in this location just east of Kankakee, Luke has learned one thing: autumn is good for business.

“I never thought I would buy so many pumpkins in my life. People just love the tradition of fall. We have so many ideas. We’ve been very blessed.”

KANKAKEE — More than 70 law enforcement personnel from 13 agencies collaborated Thursday in a countywide effort they said hoped to reduce crime, apprehend fugitives of the law and promote safety throughout Kankakee County by reducing violence.

The countywide effort resulted in 20 arrests on charges that included aggravated unlawful use of a weapon, possession of a defaced firearm, aggravated driving under the influence and the obstruction of justice.

The sweep mostly included suspects who had outstanding warrants or missed court dates.

“The ability to bring over 70 police officers in from 13 different police agencies to work collectively to promote safety and reduce violence in the county was amazing,” said Kankakee County Sheriff Mike Downey.

“The effort resulted in two stolen firearms being recovered, in addition to a vehicle used in an out-of-county homicide. Additionally, the work by these officers resulted in three vehicles being towed, one dog being rescued during a search warrant on a residence, as well as over 70 traffic and civil citations.”

Kankakee Police Chief Frank Kosman said this was one of many ongoing efforts planned to create continued peace and safety in the communities.

“This was a good way to send the message that violence in the City of Kankakee and the county-at-large will not be tolerated and that those that promote violence will be arrested and prosecuted,” Kosman said.

Both Downey and Kosman thanked each of the participating agencies for sharing their expertise and resources, including police K9s and telecommunicators, which allowed for a successful operation.

BRADLEY — Bradley Elementary District 61 school principals touched upon issues of student engagement and behavior teachers are experiencing in their virtual classrooms during the school board meeting Thursday.

Bradley Central Principal Mark Kohl said he has witnessed some behavioral issues in Zoom class meetings, such as students misbehaving to show off for their classmates or sleeping during class.

In some instances, students have been kicked off Zoom calls for distracting behavior.

The school sent out a video reminding remote learners of expectations in the virtual classroom and has seen some improvement, he said.

However, some students still are not logging in to every class they are required to in the mornings. School staff have been calling and sending letters home to inform parents of attendance issues.

Kohl said some students are dishonest with their parents about how often they log in to class.

At least five or six parents called the school after receiving an attendance letter saying their children told them they were logging in every hour, when that was not the case.

Kohl said despite those issues, virtual learning has been successful overall. He hopes more students will be encouraged to switch from full time remote to in-person school in the second trimester, he added.

“Our teachers are teaching differently; technology-wise, they’ve really learned a lot, our staff has,” he said. “There’s still frustration with completion of work, but we have that in person too. It’s going to be challenging as we move forward with remote learning.”

Bradley West Principal Trisha Anderson said the school has not seen as many behavioral issues, but staff have been speaking with individual parents and students about lack of participation and engagement.

They also work with the I-KAN Regional Office of Education on attendance issues.

“I know that it has been challenging on some of the families. ... Some [students] are not as fortunate to have a mom or somebody sitting with them to help them [with school work],” Anderson said. “It has been very frustrating.”

Bradley East Principal Anna Kirchner said she has sat in on several Zoom class meetings with her teachers, and for the most part, they have been going well.

However, teachers also are having to troubleshoot issues with attendance and behavior in their virtual classrooms as they go along.

“I really am just amazed by remote teachers and what they are doing in the classroom with students,” she said. “I feel like they are going above and beyond. It’s constant problem solving and seeing what we can do better.”

School Board Vice President Phil Trudeau brought up a situation he heard about where a teacher was not letting students log in to the Zoom meeting if they were more than five minutes late because it disrupts the class.

“I get it, but on the flipside of the coin, if a kid showed up late for school, would we kick them out of the building or tell them they can’t go to class?” Trudeau said. “I don’t like the idea of a kid sitting on a screen for half an hour, maybe not knowing why they’re not allowed in.”

All three principals as well as Superintendent Scott Goselin confirmed there was no such policy in place for the district or at any individual school but said they would address the issue.

“It’s unfortunate things like that are happening,” Anderson said. “I agree; they shouldn’t not be allowed in. If they are showing up, that’s half the battle that we’re facing right now.”