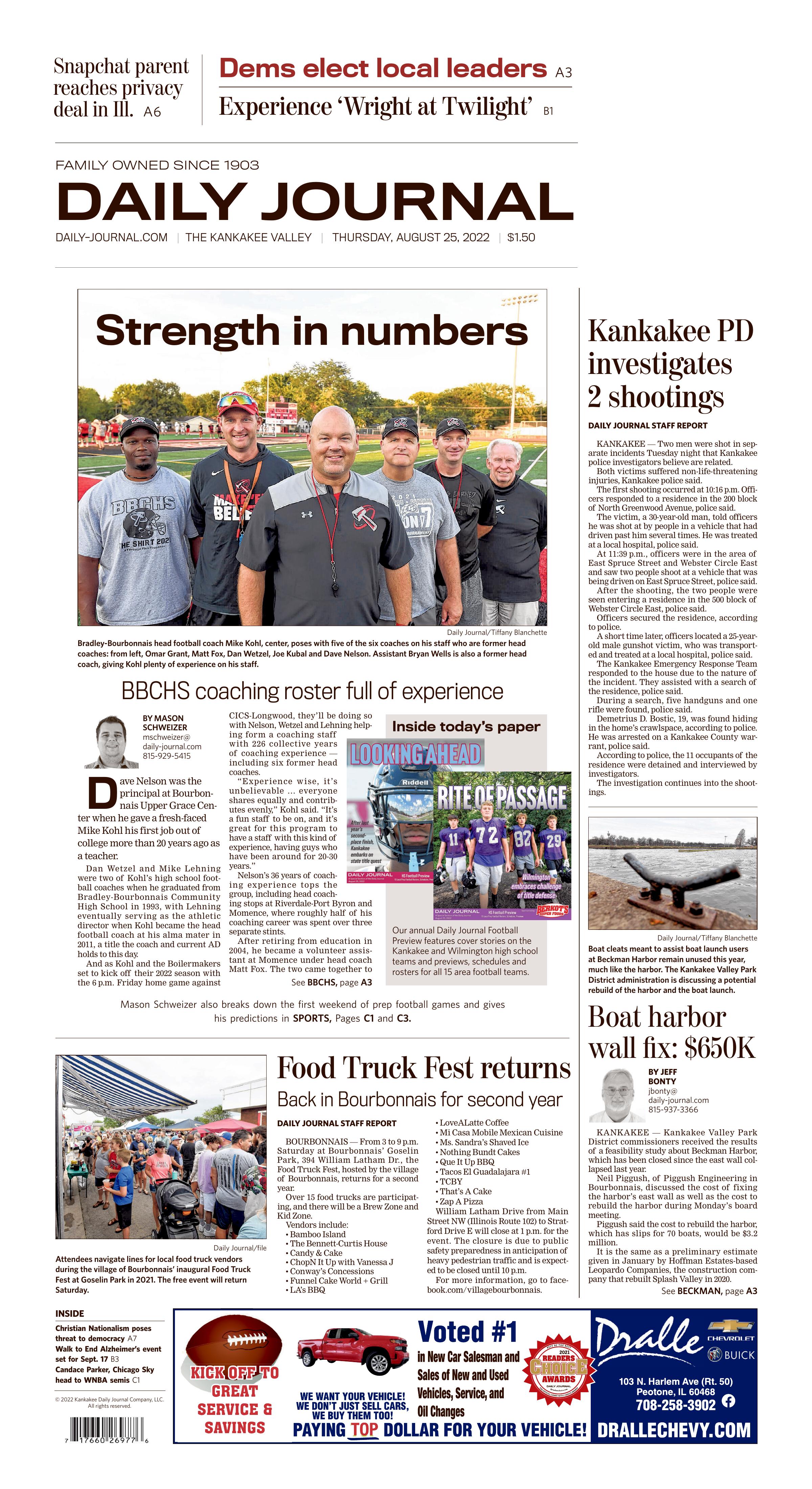 Bradley-Bourbonnais' Matthew Allen catches a pass in the endzone while football coach Mike Kohl looks on during a summer workout last month.

Dave Nelson was the principal at Bourbonnais Upper Grace Center when he gave a fresh-faced Mike Kohl his first job out of college more than 20 years ago as a teacher.

Dan Wetzel and Mike Lehning were two of Kohl’s high school football coaches when he graduated from Bradley-Bourbonnais Community High School in 1993, with Lehning eventually serving as the athletic director when Kohl became the head football coach at his alma mater in 2011, a title the coach and current AD holds to this day.

And as Kohl and the Boilermakers set to kick off their 2022 season with the 6 p.m. Friday home game against CICS-Longwood, they’ll be doing so with Nelson, Wetzel and Lehning helping form a coaching staff with 226 collective years of coaching experience — including six former head coaches.

“Experience wise, it’s unbelievable ... everyone shares equally and contributes evenly,” Kohl said. “It’s a fun staff to be on, and it’s great for this program to have a staff with this kind of experience, having guys who have been around for 20-30 years.”

Nelson’s 36 years of coaching experience tops the group, including head coaching stops at Riverdale-Port Byron and Momence, where roughly half of his coaching career was spent over three separate stints.

After retiring from education in 2004, he became a volunteer assistant at Momence under head coach Matt Fox. The two came together to Bradley-Bourbonnais in 2016, where Nelson has served as the special teams coach ever since and Fox serves as the quarterback coach and calls offensive plays with Kohl.

“We tease each other that the only way to get to Bradley is through Momence, but we had some great coaches there; I mean, Craig Bundy was at Momence before he came over here,” Nelson said. “Momence has good football and good people.”

Wells joined the staff this year, as did Wetzel, who retired after 22 years as the head coach at Herscher after last fall. Although he retired, Wetzel knows that the game continues to evolve, and the bevy of experienced coaches he now shares an office and field with provide him that opportunity, something he hopes to reciprocate himself.

“When you retire, you still feel like you’re evolving; you learn stuff all the time and this is an excellent staff,” Wetzel said. “I’ve definitely picked up some things, and its been a great experience so far.

“I’m just hoping to continue to make [the student-athletes] better football players and better kids,” he added. “That’s always my goal, no matter if it’s a head coach or assistant — I love working with young men, teaching them sportsmanship.”

Omar Grant is one of the coaches with the least amount of experience coaching high school football, checking in at the seventh-most tenured out of 10 assistants.

But even Grant brings plenty of experience as he enters his 18th year as a high school coach, all in town at Bishop McNamara, Kankakee, where he was the head coach at his alma mater from 2015-2018 and now BBCHS, where he is entering his fourth season overall and first coaching running backs and wide receivers after spending the first three seasons with the defensive backs.

“I like how they’ve embraced me from the beginning and made me feel welcome,” Grant said. “My ideas, thoughts, anything I want to talk about, they welcome and it’s awesome to have those minds with egos put aside.”

For Kohl, who is one of the busiest athletic administrators in the area as both the head football coach and athletic director, having so much reliable experience to lean on has also helped pay dividends at home, with Kohl crediting the contagious culture of hard work for giving everyone enough time to balance their home and work lives and also reminding him that the home life comes first.

“The first thing is making sure I win at home and make sure I’m a dad, and to be a dad I have to be present,” Kohl said. “With guys on my staff like this, who put in just as much time as I do, it makes it easier to have time with my kids and family, and to just make sure I take a deep breath and understand the balance of what’s work and what’s life, and that life is more important than work.”

BOURBONNAIS — From 3 to 9 p.m. Saturday at Bourbonnais’ Goselin Park, 394 William Latham Dr., the Food Truck Fest, hosted by the village of Bourbonnais, returns for a second year.

Over 15 food trucks are participating, and there will be a Brew Zone and Kid Zone.

• ChopN It Up with Vanessa J

William Latham Drive from Main Street NW (Illinois Route 102) to Stratford Drive E will close at 1 p.m. for the event. The closure is due to public safety preparedness in anticipation of heavy pedestrian traffic and is expected to be closed until 10 p.m.

For more information, go to facebook.com/villagebourbonnais.

The first shooting occurred at 10:16 p.m. Officers responded to a residence in the 200 block of North Greenwood Avenue, police said.

The victim, a 30-year-old man, told officers he was shot at by people in a vehicle that had driven past him several times. He was treated at a local hospital, police said.

After the shooting, the two people were seen entering a residence in the 500 block of Webster Circle East, police said.

Officers secured the residence, according to police.

A short time later, officers located a 25-year-old male gunshot victim, who was transported and treated at a local hospital, police said.

The Kankakee Emergency Response Team responded to the house due to the nature of the incident. They assisted with a search of the residence, police said.

During a search, five handguns and one rifle were found, police said.

Demetrius D. Bostic, 19, was found hiding in the home’s crawlspace, according to police. He was arrested on a Kankakee County warrant, police said.

According to police, the 11 occupants of the residence were detained and interviewed by investigators.

The investigation continues into the shootings.

Boat cleats meant to assist boat launch users at Beckman Harbor remain unused this year, much like the harbor. The Kankakee Valley Park District administration is discussing a potential rebuild of the harbor and the boat launch.

KANKAKEE — Kankakee Valley Park District commissioners received the results of a feasibility study about Beckman Harbor, which has been closed since the east wall collapsed last year.

Neil Piggush, of Piggush Engineering in Bourbonnais, discussed the cost of fixing the harbor’s east wall as well as the cost to rebuild the harbor during Monday’s board meeting.

Piggush said the cost to rebuild the harbor, which has slips for 70 boats, would be $3.2 million.

It is the same as a preliminary estimate given in January by Hoffman Estates-based Leopardo Companies, the construction company that rebuilt Splash Valley in 2020.

Commissioner Dave Skelly asked for a breakdown of how much of the $3.2 million would go for permits, architecture and other planning costs.

“Where would we get the money is the big thing,” Skelly said.

The actual construction cost would be approximately $2.3 million, Piggush said.

“How long is it going to take to get the project done?” Commissioner Bill Spriggs asked.

If the project is put out for bid in January, work could begin on shoring up the wall and replacing and widening existing sidewalks in spring 2023. The harbor would remain closed for the 2023 season, Piggush said.

Dayna Heitz, the executive director of KVPD, reminded the commissioners the district has already secured a $150,000 state grant through State Sen. Patrick Joyce.

Heitz shared with the board that a proposed capital project in the 2022-23 budget is being scrapped. The $250,000 budgeted for that project can be used for the east wall project.

The park district could apply for a grant to secure the other $200,000, Heitz said.

Any work on the harbor has to be approved first by the U.S. Army Corps of Engineers and then the Illinois Department of Natural Resources.