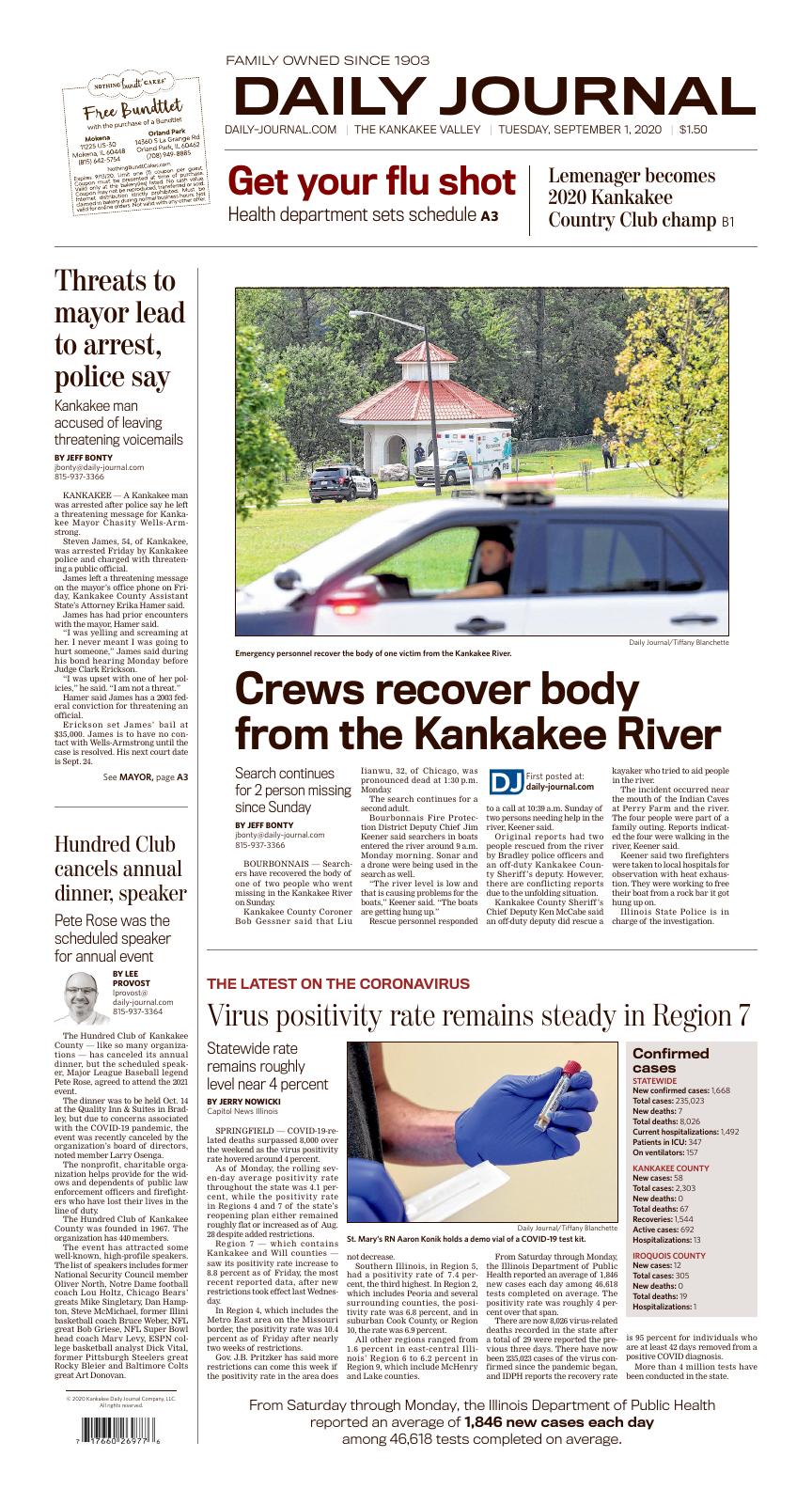 Emergency personnel recover the body of one victim from the Kankakee River.

BOURBONNAIS — Searchers have recovered the body of one of two people who went missing in the Kankakee River on Sunday.

The search continues for a second adult.

Bourbonnais Fire Protection District Deputy Chief Jim Keener said searchers in boats entered the river around 9 a.m. Monday morning. Sonar and a drone were being used in the search as well.

“The river level is low and that is causing problems for the boats,” Keener said. “The boats are getting hung up.”

Rescue personnel responded to a call at 10:39 a.m. Sunday of two persons needing help in the river, Keener said.

Original reports had two people rescued from the river by Bradley police officers and an off-duty Kankakee County Sheriff’s deputy. However, there are conflicting reports due to the unfolding situation.

Kankakee County Sheriff’s Chief Deputy Ken McCabe said an off-duty deputy did rescue a kayaker who tried to aid people in the river.

The incident occurred near the mouth of the Indian Caves at Perry Farm and the river. The four people were part of a family outing. Reports indicated the four were walking in the river, Keener said.

Keener said two firefighters were taken to local hospitals for observation with heat exhaustion. They were working to free their boat from a rock bar it got hung up on.

Illinois State Police is in charge of the investigation.

SPRINGFIELD — COVID-19-related deaths surpassed 8,000 over the weekend as the virus positivity rate hovered around 4 percent.

As of Monday, the rolling seven-day average positivity rate throughout the state was 4.1 percent, while the positivity rate in Regions 4 and 7 of the state’s reopening plan either remained roughly flat or increased as of Aug. 28 despite added restrictions.

Region 7 — which contains Kankakee and Will counties — saw its positivity rate increase to 8.8 percent as of Friday, the most recent reported data, after new restrictions took effect last Wednesday.

In Region 4, which includes the Metro East area on the Missouri border, the positivity rate was 10.4 percent as of Friday after nearly two weeks of restrictions.

Gov. J.B. Pritzker has said more restrictions can come this week if the positivity rate in the area does not decrease.

Southern Illinois, in Region 5, had a positivity rate of 7.4 percent, the third highest. In Region 2, which includes Peoria and several surrounding counties, the positivity rate was 6.8 percent, and in suburban Cook County, or Region 10, the rate was 6.9 percent.

All other regions ranged from 1.6 percent in east-central Illinois’ Region 6 to 6.2 percent in Region 9, which include McHenry and Lake counties.

From Saturday through Monday, the Illinois Department of Public Health reported an average of 1,846 new cases each day among 46,618 tests completed on average. The positivity rate was roughly 4 percent over that span.

There are now 8,026 virus-related deaths recorded in the state after a total of 29 were reported the previous three days. There have now been 235,023 cases of the virus confirmed since the pandemic began, and IDPH reports the recovery rate is 95 percent for individuals who are at least 42 days removed from a positive COVID diagnosis.

More than 4 million tests have been conducted in the state.

KANKAKEE — A Kankakee man was arrested after police say he left a threatening message for Kankakee Mayor Chasity Wells-Armstrong.

Steven James, 54, of Kankakee, was arrested Friday by Kankakee police and charged with threatening a public official.

James has had prior encounters with the mayor, Hamer said.

“I was yelling and screaming at her. I never meant I was going to hurt someone,” James said during his bond hearing Monday before Judge Clark Erickson.

Hamer said James has a 2003 federal conviction for threatening an official.

Erickson set James’ bail at $35,000. James is to have no contact with Wells-Armstrong until the case is resolved. His next court date is Sept. 24.

A Class 3 felony, a charge of threatening a public official carries three to seven years in prison.

Erickson granted Hamer’s motion for a special prosecutor to be appointed.

Kankakee County State’s Attorney Jim Rowe said James has left him “disturbing voicemails which I maintain records of to this day.”

“I did not file charges against him, but as a result, we have sought appointment of a special prosecutor in his other pending cases. Due to that same conflict, we are requesting appointment of the appellate prosecutor’s office once again. It’s the right thing to do to avoid even the appearance of impropriety.”

James has two other cases pending in Kankakee County in which special prosecutors have been appointed.

In September 2017, James was arrested by Kankakee police on charges of two counts of felony aggravated battery. He is represented by the public defender’s office.

The other case originated in 2018 when James was charged with phone and electronic harassment and disorderly conduct. He is representing himself in that case.

The Hundred Club of Kankakee County — like so many organizations — has canceled its annual dinner, but the scheduled speaker, Major League Baseball legend Pete Rose, agreed to attend the 2021 event.

The dinner was to be held Oct. 14 at the Quality Inn & Suites in Bradley, but due to concerns associated with the COVID-19 pandemic, the event was recently canceled by the organization’s board of directors, noted member Larry Osenga.

The nonprofit, charitable organization helps provide for the widows and dependents of public law enforcement officers and firefighters who have lost their lives in the line of duty.

The Hundred Club of Kankakee County was founded in 1967. The organization has 440 members. 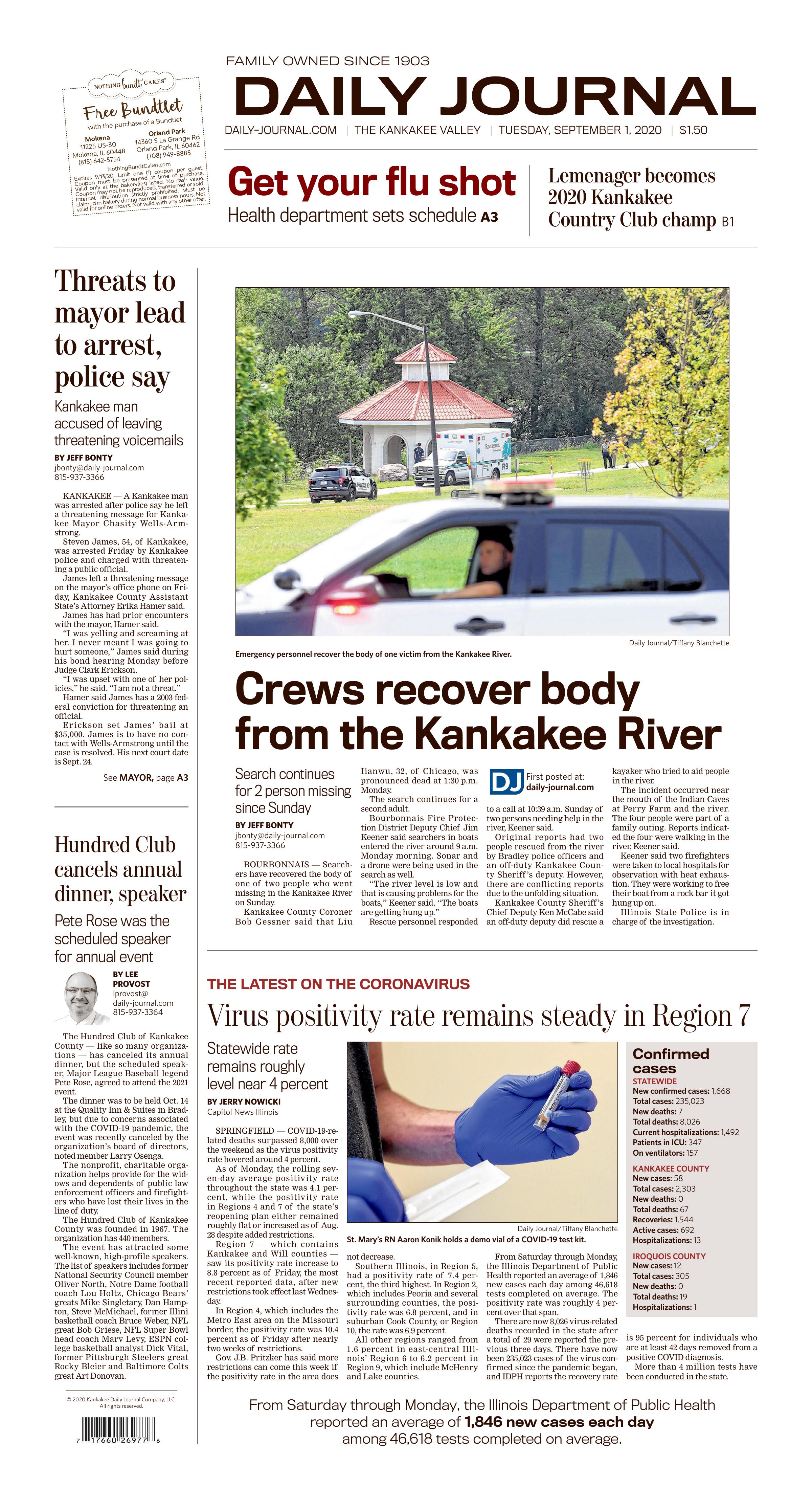