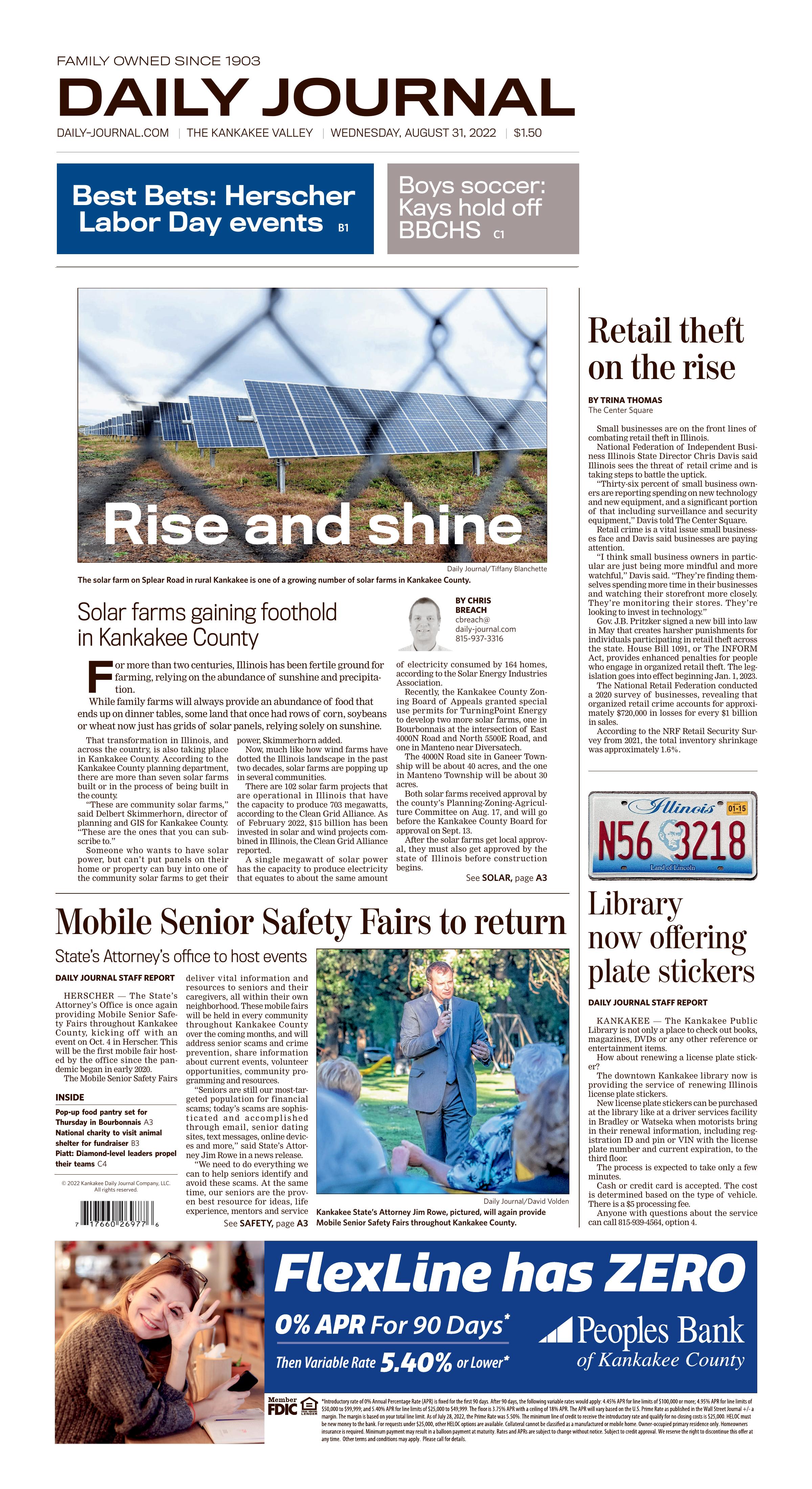 The solar farm on Splear Road in rural Kankakee is one of a growing number of solar farms in Kankakee County.

Most solar farms in Kankakee County have 2 megawatts of capacity, which is enough to power approximately 350 homes. Each farm is situated on 10-20 acres of land leased from local landowners.

For more than two centuries, Illinois has been fertile ground for farming, relying on the abundance of sunshine and precipitation.

While family farms will always provide an abundance of food that ends up on dinner tables, some land that once had rows of corn, soybeans or wheat now just has grids of solar panels, relying solely on sunshine.

That transformation in Illinois, and across the country, is also taking place in Kankakee County. According to the Kankakee County planning department, there are more than seven solar farms built or in the process of being built in the county.

“These are community solar farms,” said Delbert Skimmerhorn, director of planning and GIS for Kankakee County. “These are the ones that you can subscribe to.”

Someone who wants to have solar power, but can’t put panels on their home or property can buy into one of the community solar farms to get their power, Skimmerhorn added.

Now, much like how wind farms have dotted the Illinois landscape in the past two decades, solar farms are popping up in several communities.

A single megawatt of solar power has the capacity to produce electricity that equates to about the same amount of electricity consumed by 164 homes, according to the Solar Energy Industries Association.

Recently, the Kankakee County Zoning Board of Appeals granted special use permits for TurningPoint Energy to develop two more solar farms, one in Bourbonnais at the intersection of East 4000N Road and North 5500E Road, and one in Manteno near Diversatech.

Both solar farms received approval by the county’s Planning-Zoning-Agriculture Committee on Aug. 17, and will go before the Kankakee County Board for approval on Sept. 13.

After the solar farms get local approval, they must also get approved by the state of Illinois before construction begins.

In Kankakee County, 72% of the land is dedicated to farming, and agriculture generates 17% of the local economy, said Chad Miller, manager of Kankakee County Farm Bureau. Roughly, one in 12 jobs in the county is tied to agriculture.

The community solar farms that have now been built or being constructed in Kankakee County are in the 2 megawatt, 20-acre range in size, but the new ones being proposed are 5 megawatt, 40-acre range.

Another solar program that the state is managing is the utility solar farms that are much, much larger. One of those solar farms, Heritage Prairie Renewable by Pattern Energy, is being proposed in Kankakee County near Essex, and it will encompass 2,800 acres. It will be larger than all the other solar farms now in operation in the county.

“That’s an entirely separate approval process with the state,” said Skimmerhorn, who added the utility solar farms are large, more than 100 acres and more than 50 megawatts. “... Those are a power plant, making power for the general public at large just like any other power plant.”

Pattern Energy is also proposing the Heritage Prairie Wind project that will be in western Kankakee County and northeastern Livingston County. According to Heritage Prairie Renewable’s application, the total project is an investment of $1 billion in Illinois.

In addition, the land leases will generate more than $200 million in payments to landowners over the life of the project. It also provides an estimated $6.8 million per year to local communities, according to the application.

Tim Nugent, president and CEO of the Economic Alliance of Kankakee County, said renewable energy is in demand.

“There’s a need for electricity,” Nugent said. “The farmers have done a great job of producing food from the land that they have. At some point there’s going to be a tipping point of losing too much farmland. We’re decades away from that happening.”

Heritage Prairie estimates the projects will create 800 to 1,000 wind construction jobs and 300 to 400 solar construction jobs, including heavy equipment operators, electricians, laborers and others.

“It’s millions of dollars of investment,” Nugent said. “... It’s been quite an investment for Kankakee County that never existed four years ago.”

Heritage Prairie Renewable will be designed as a 500 to 600 megawatt wind facility and a 300 MW solar facility. The target construction would begin this year with completion expected in 2023 or 2024.

At the recent Zoning Appeals Board meeting, there was time allotted for public comment for or against TurningPoint Energy’s request for the special use permit. No residents were there to voice their opinion.

Public input is expected for the proposed solar and wind project by Heritage Prairie Renewable, so the public meeting will be held at 6 p.m. Sept. 26 in the fourth floor auditorium at the Kankakee Public Library in the Executive Centre building.

“There’s a lot of farmland that isn’t real good,” said John Fetherling, county board member and chairman of the Zoning, Planning and Agriculture committee. “I noticed that the ones that we approved, ... they were on the corner that had the bad ground. Or they were somewhere that had too much sand, or they were getting a low yield, so they didn’t take the best piece [of land].”

Fetherling agreed with Miller that the property owner has the right do what he sees fit for the farm.

“However, we do encourage landowners to look at all of the details, the length of the agreement,” Miller said. “If there’s any other opportunity that they would want to pursue with their land. ... These solar agreements are very long term. We ask that the land owners consider the impact to their neighbors.

“We encourage land owners to consult with an attorney to make sure they fully understand the terms of the agreement. A lot of times it’s a very lengthy agreement.”

Miller’s other concern, especially if more utility solar farms are built, is the potential impact they will have on the total agriculture industry.

“If enough farmland is removed from production here in the Kankakee County area, that may impact fertilizer suppliers, all the ancillary equipment dealers, seed sales people. It could have an impact on the rest of agriculture industry.”

All of these solar farms produce 2 megawatts of power.

HERSCHER — The State’s Attorney’s Office is once again providing Mobile Senior Safety Fairs throughout Kankakee County, kicking off with an event on Oct. 4 in Herscher. This will be the first mobile fair hosted by the office since the pandemic began in early 2020.

The Mobile Senior Safety Fairs deliver vital information and resources to seniors and their caregivers, all within their own neighborhood. These mobile fairs will be held in every community throughout Kankakee County over the coming months, and will address senior scams and crime prevention, share information about current events, volunteer opportunities, community programming and resources.

“We need to do everything we can to help seniors identify and avoid these scams. At the same time, our seniors are the proven best resource for ideas, life experience, mentors and service — we look forward to engaging with them in finding solutions to the problems in our community and partnering with them on local service projects. This is going to be a win-win partnership for seniors and our entire community.”

The Oct. 4 Senior Safety Fair is hosted at Courtyard Estates of Herscher, in partnership with County Board member Carol Webber and Herscher Chief of Police Chad Scanlon. The event runs from 10:30 a.m. to noon. Future dates and locations are to be announced.

In this July 21, 2021 photo, a consumer shops at a retail store in Morton Grove, Ill. Consumer prices rose 0.4% last month, slightly higher than August’s gain and pushing annual inflation back to the highest increase in 13 years. The consumer price index rose 5.4% in September from a year ago, up slightly from August’s gain of 5.3% and matching the increases in June and July.

Small businesses are on the front lines of combating retail theft in Illinois.

“Thirty-six percent of small business owners are reporting spending on new technology and new equipment, and a significant portion of that including surveillance and security equipment,” Davis told The Center Square.

“I think small business owners in particular are just being more mindful and more watchful,” Davis said. “They’re finding themselves spending more time in their businesses and watching their storefront more closely. They’re monitoring their stores. They’re looking to invest in technology.”

Gov. J.B. Pritzker signed a new bill into law in May that creates harsher punishments for individuals participating in retail theft across the state. House Bill 1091, or The INFORM Act, provides enhanced penalties for people who engage in organized retail theft. The legislation goes into effect beginning Jan. 1, 2023.

The National Retail Federation conducted a 2020 survey of businesses, revealing that organized retail crime accounts for approximately $720,000 in losses for every $1 billion in sales. This amounts to a 0.071% loss rate which is an increase from a 0.045% increase in 2015.

According to the NRF Retail Security Survey from 2021, the total inventory shrinkage was approximately 1.6%.

KANKAKEE — The Kankakee Public Library is not only a place to check out books, magazines, DVDs or any other reference or entertainment items.

How about renewing a license plate sticker?

New license plate stickers can be purchased at the library like at a driver services facility in Bradley or Watseka when motorists bring in their renewal information, including registration ID and pin or VIN with the license plate number and current expiration, to the third floor.

The process is expected to take only a few minutes.

Cash or credit card is accepted. The cost is determined based on the type of vehicle. There is a $5 processing fee.