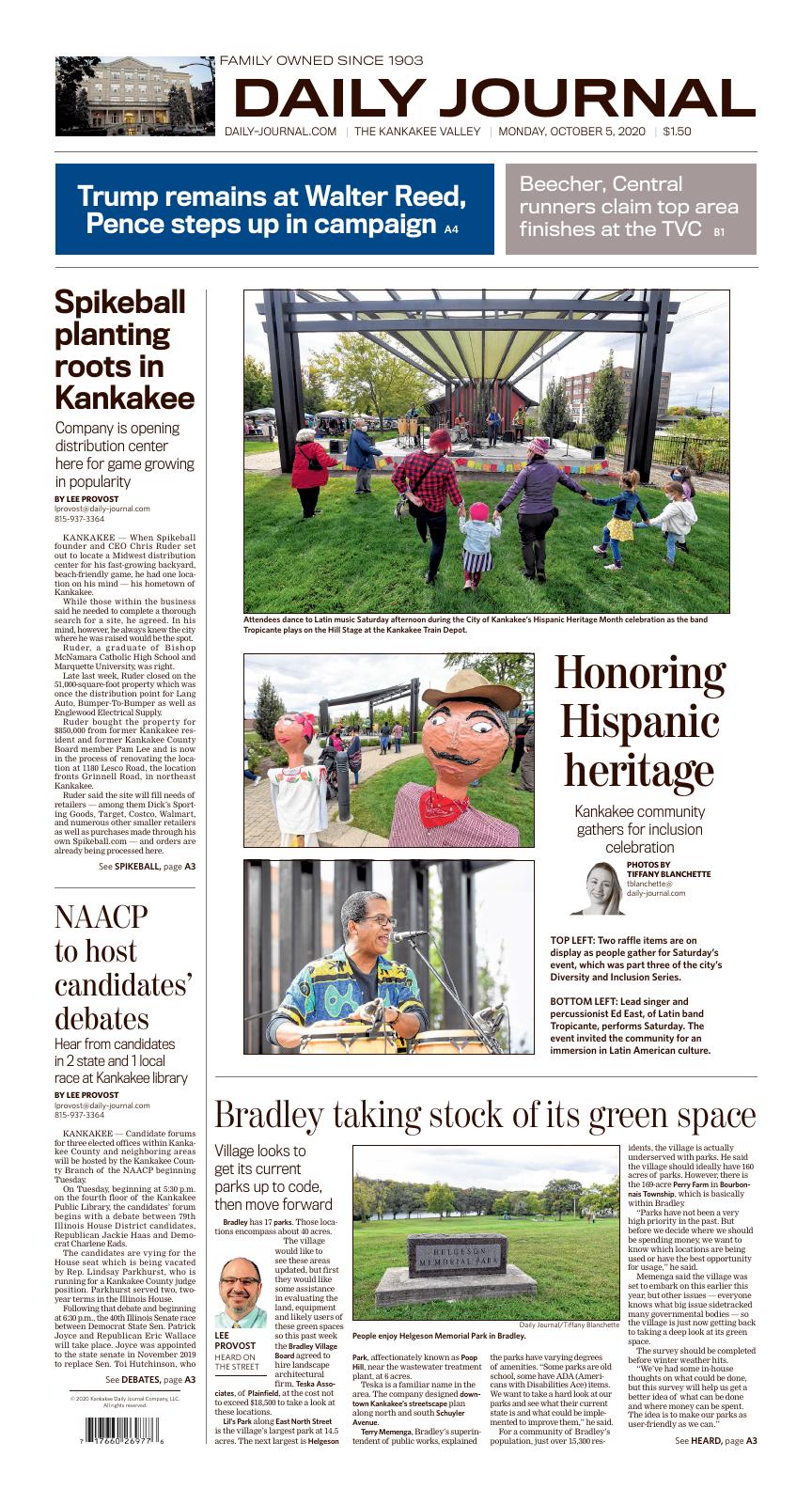 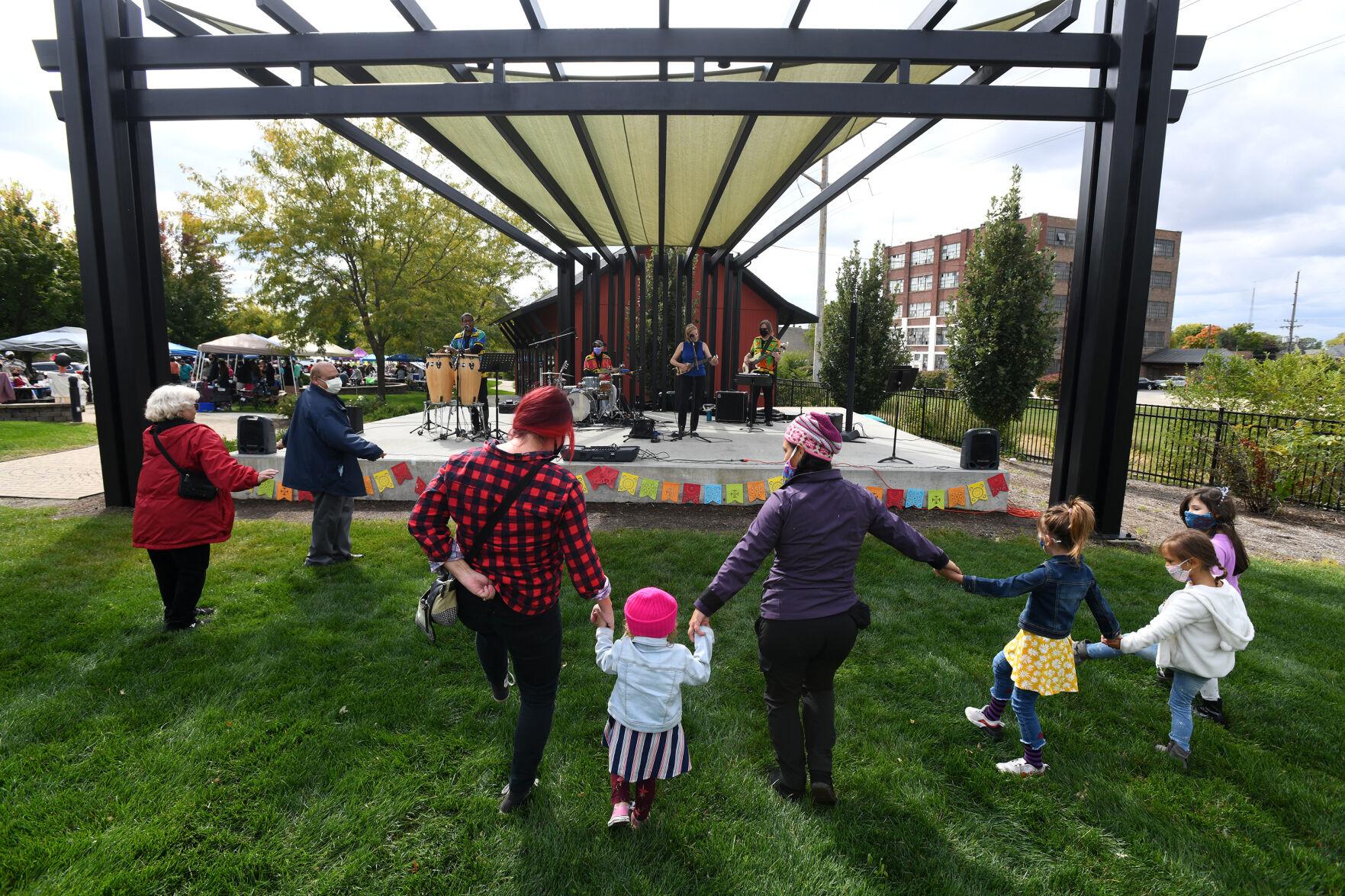 Attendees dance to Latin music Saturday afternoon during the City of Kankakee’s Hispanic Heritage Month celebration as the band Tropicante plays on the Hill Stage at the Kankakee Train Depot. 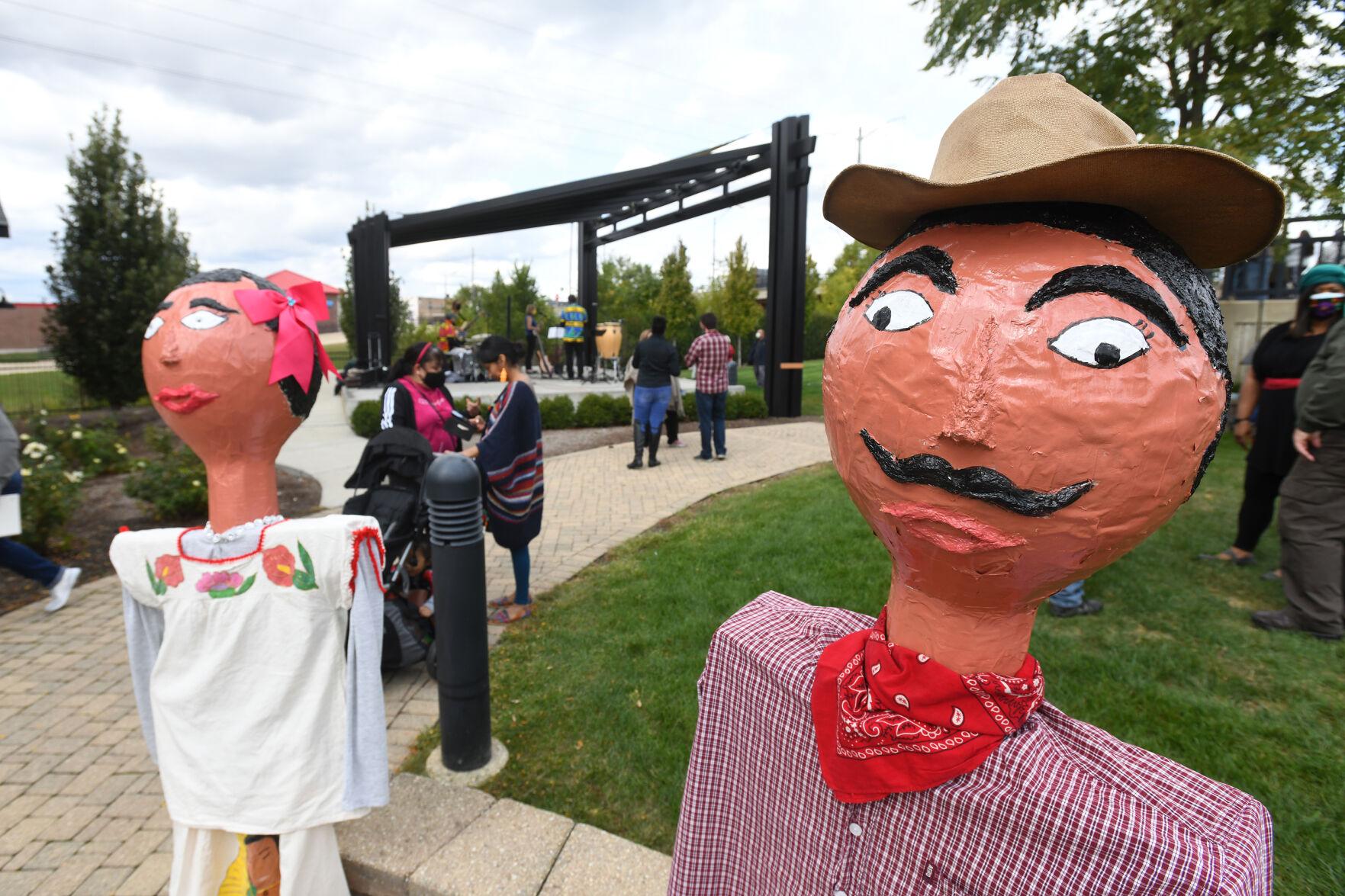 Two raffle items are displayed as people gathered for Saturday’s event, which was part three of the city’s Diversity and Inclusion Series. 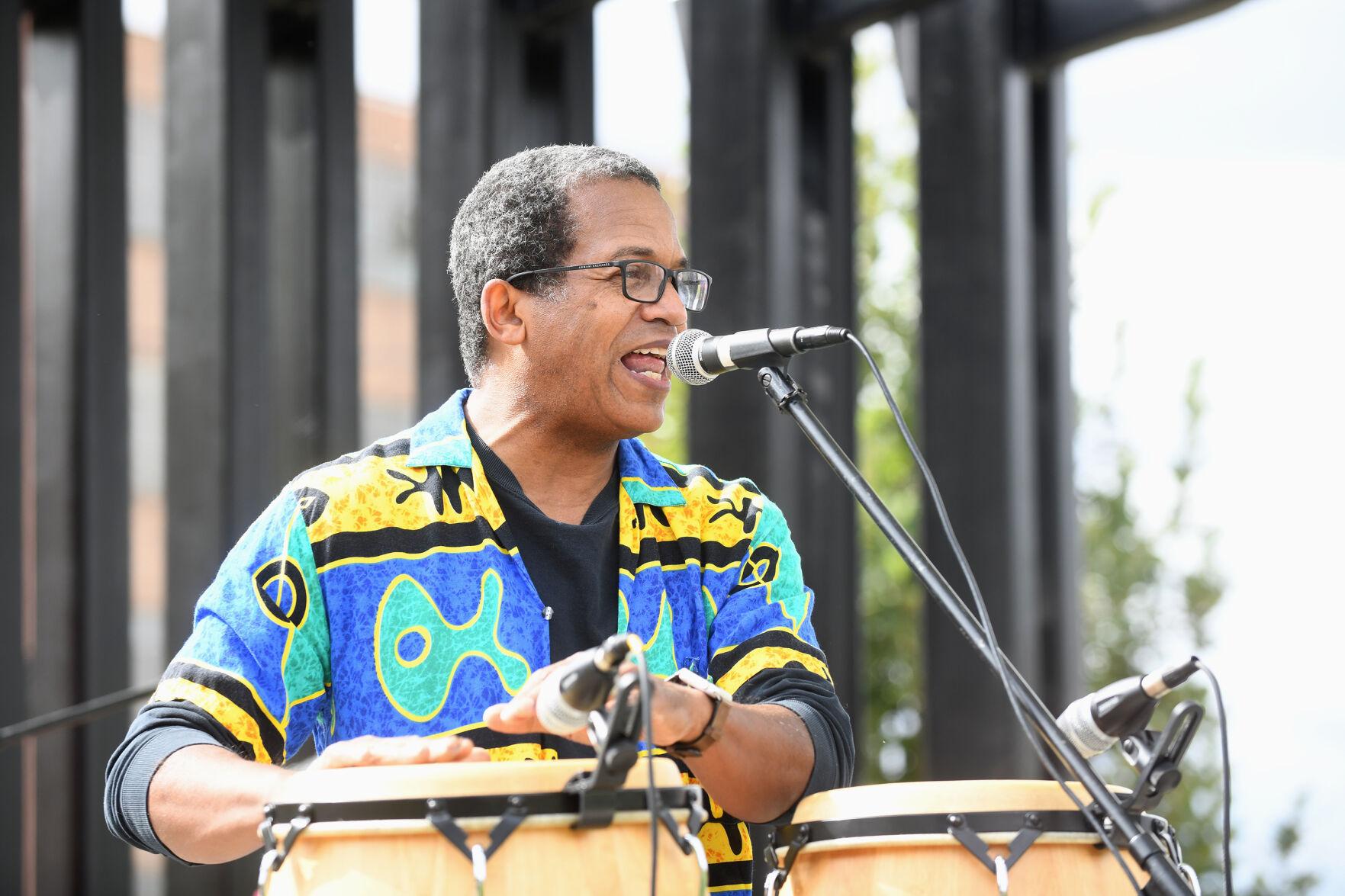 Bradley has 17 parks. Those locations encompass about 40 acres.

The village would like to see these areas updated, but first they would like some assistance in evaluating the land, equipment and likely users of these green spaces so this past week the Bradley Village Board agreed to hire landscape architectural firm, Teska Associates, of Plainfield, at the cost not to exceed $18,500 to take a look at these locations.

Lil’s Park along East North Street is the village’s largest park at 14.5 acres. The next largest is Helgeson Park, affectionately known as Poop Hill, near the wastewater treatment plant, at 6 acres.

Teska is a familiar name in the area. The company designed downtown Kankakee’s streetscape plan along north and south Schuyler Avenue.

Terry Memenga, Bradley’s superintendent of public works, explained the parks have varying degrees of amenities. “Some parks are old school, some have ADA (Americans with Disabilities Ace) items. We want to take a hard look at our parks and see what their current state is and what could be implemented to improve them,” he said.

For a community of Bradley’s population, just over 15,300 residents, the village is actually underserved with parks. He said the village should ideally have 160 acres of parks. However, there is the 169-acre Perry Farm in Bourbonnais Township, which is basically within Bradley.

“Parks have not been a very high priority in the past. But before we decide where we should be spending money, we want to know which locations are being used or have the best opportunity for usage,” he said.

Memenga said the village was set to embark on this earlier this year, but other issues — everyone knows what big issue sidetracked many governmental bodies — so the village is just now getting back to taking a deep look at its green space.

The survey should be completed before winter weather hits.

“We’ve had some in-house thoughts on what could be done, but this survey will help us get a better idea of what can be done and where money can be spent. The idea is to make our parks as user-friendly as we can.”

Memenga was not aware of a park survey ever being completed.

Memenga noted when he started with the village about three years ago, upgrades where being completed at Blatt Park. He said when he saw that project, it became obvious work was needed in parks throughout the village.

Jodi Mariano, a principle and landscape architect for Teska, said the park assessment will determine which locations are code and ordinance compliant.

“If it doesn’t meet the code, then what must be done to see that it does,” she said. She noted it’s not unusual for parks to fall out of compliance because codes change.

“Our ways to play are always evolving. At some point we built baseball fields, then soccer fields. Equipment changes. But what we are looking at in Bradley is are the parks up to code. This survey is not about revamping the parks. The first step before anything is done is to take stock in what you have.”

KANKAKEE — When Spikeball founder and CEO Chris Ruder set out to locate a Midwest distribution center for his fast-growing backyard, beach-friendly game, he had one location on his mind — his hometown of Kankakee.

While those within the business said he needed to complete a thorough search for a site, he agreed. In his mind, however, he always knew the city where he was raised would be the spot.

Late last week, Ruder closed on the 51,000-square-foot property which was once the distribution point for Lang Auto, Bumper-To-Bumper as well as Englewood Electrical Supply.

Ruder said the site will fill needs of retailers — among them Dick’s Sporting Goods, Target, Costco, Walmart, and numerous other smaller retailers as well as purchases made through his own Spikeball.com — and orders are already being processed here.

On a tour of the location late this week, Ruder said he still cannot believe the success his creation has taken. While not willing to disclose yearly sales figures, he noted Spikeball has $100 million of sales from 2008 to present.

“Just standing in here I can’t believe it. I started this in my basement. I’m absolutely astonished,” he said. “I’m just flabbergasted at how large this has become and we’re having fun doing this. It’s icing on the cake to be able to come back to my roots. I wanted a place in Kankakee. I wanted to make my roots even deeper here.”

Tim Nugent, president and CEO of the Economic Alliance of Kankakee County, is glad he has.

“This was an empty location. This is just another one of those stories. While it’s a challenge when we there is empty space, it’s also an opportunity,” he said. “We’ve seen in time and time again. It’s the circle of life for business. Someone leaves and another steps in to fill that void.”

Nugent said the fact Ruder is a product of Kankakee only makes the situation more special.

For those not familiar with Spikeball, it is a game played with four people, an orange-sized ball and a small net in the middle. It has been described as a hybrid of volleyball and four square. A player starts a point by serving the ball down onto the net so that the ball ricochets up at the opponents, who have three hits to return the ball to the net. If they cannot, the opponents score.

They are no boundaries so the game features plenty of running, jumping and diving. The team which hits 21 points first wins.

Ruder discovered the game while on vacation in 2003 in Hawaii. He loved it so much, he set out to bring the game back into prominence. He learned the game had not been patented and the trademark had expired. He paid only several hundred dollars for the trademark and later earned a patent for design changes to the game.

The actual game, which retails for $59, is produced at two manufacturing sites in China. It is then shipped to the United States and delivered by train to the Chicago region. From there the game is trucked to distribution points like Kankakee. Ruder had been operating his distribution out of the Kankakee County Training Center in Bradley, but the game’s popularity had rendered that site too small.

Ruder said he has sought to locate manufacturing in the U.S., but labor costs have made that impossible. He hasn’t given up on that part of his dream.

“We are always looking. We would love to make the product here,” he said.

He set out about two years to find a new distribution point.

After about six months of negotiations regarding the Kankakee property, Ruder closed on it late last week.

Product is already on hand and the company is looking at upgrading the building and expects some $200,000 could be invested.

Adam LaGesse, of Kankakee and a 2010 graduate of Bradley-Bourbonnais Community High School, is the Midwest distribution manager.

LaGesse said contractors have already been through the property and upgrades should be happening soon. He said the location will soon turn very busy as the holiday shopping season approaches.

“Things are going to get crazy here in the next month or so. People are going to notice a lot of activity here,” he said.

Meanwhile, Ruder sees even greater growth. He noted professional sports teams are using Spikeball as a training and team-building exercise.

“I have to say, that’s fantastic marketing for us. No way did I think it would ever turn into this. Not in a million years.”

Kyle Burton, the recreation manager for the Kankakee Valley Park District, has been a Spikeball player for about four years.

He loves the game and believes others will, too.

So he decided to start a league at the park district. The district is accepting teams and is scheduled to begin at the Rec Center on Nov. 23. The first season would conclude with a tournament on Dec. 28.

The 2-3 member teams will be charged an entry fee of $70. The league is for men and women players ages 16 and older.

Burton is targeting at least six teams for the first year, but would not object to having more.

"I've been a Spikeball fan for quite a while," he said.

While he knows many people may not be familiar with the game — described as a cross between volleyball and four square — it is relatively easy to play. He said most players catch on to the game within 15 minutes of play. The district has links on its website with rules and an explanation of the game.

To inquire, call 815-939-1311, visit kvpd.com or go to the park district's administrative office at Bird Park.

"No way did I think it would ever turn into this. Not in a million years."

KANKAKEE — Candidate forums for three elected offices within Kankakee County and neighboring areas will be hosted by the Kankakee County Branch of the NAACP beginning Tuesday.

On Tuesday, beginning at 5:30 p.m. on the fourth floor of the Kankakee Public Library, the candidates’ forum begins with a debate between 79th Illinois House District candidates, Republican Jackie Haas and Democrat Charlene Eads.

The candidates are vying for the House seat which is being vacated by Rep. Lindsay Parkhurst, who is running for a Kankakee County judge position. Parkhurst served two, two-year terms in the Illinois House.

Following that debate and beginning at 6:30 p.m., the 40th Illinois Senate race between Democrat State Sen. Patrick Joyce and Republican Eric Wallace will take place. Joyce was appointed to the state senate in November 2019 to replace Sen. Toi Hutchinson, who resigned to take a position in Gov. J.B. Pritzker’s administration.

The following Tuesday, Oct. 13, a debate between Kankakee County Circuit Clerk candidates will be held. This debate begins at 5:30 p.m.

Cianci has been circuit clerk since July 2010 following the retirement of Kathy Thomas.

Due to gathering restrictions related to COVID-19, only 50 people will be allowed to attend. The debate will also be shown live on Zoom.

Two candidate forums will be hosted by the Kankakee County Branch of the NAACP's Political Action Committee on the fourth floor of the Kankakee Public Library, 201 E. Merchant St. 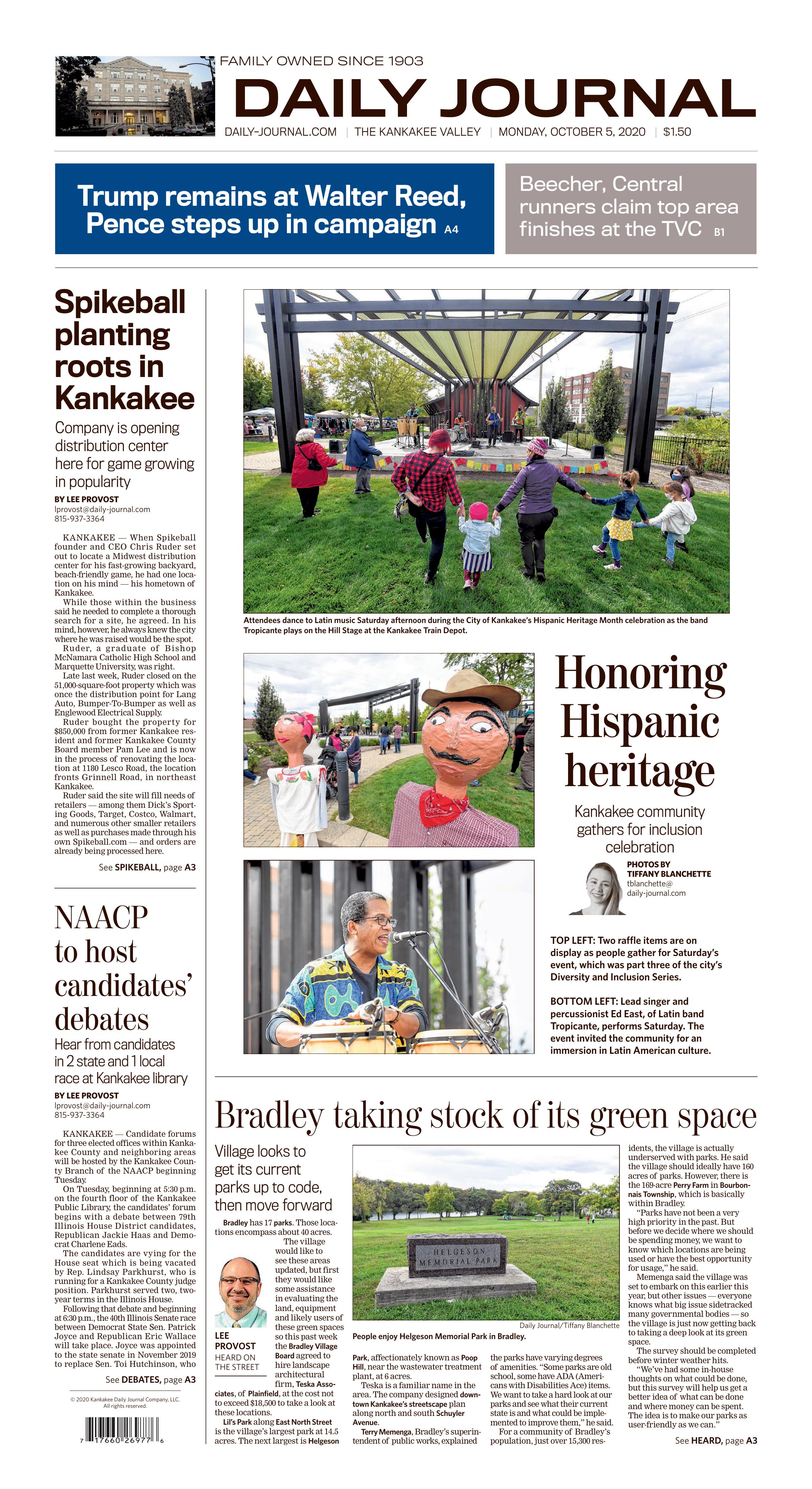