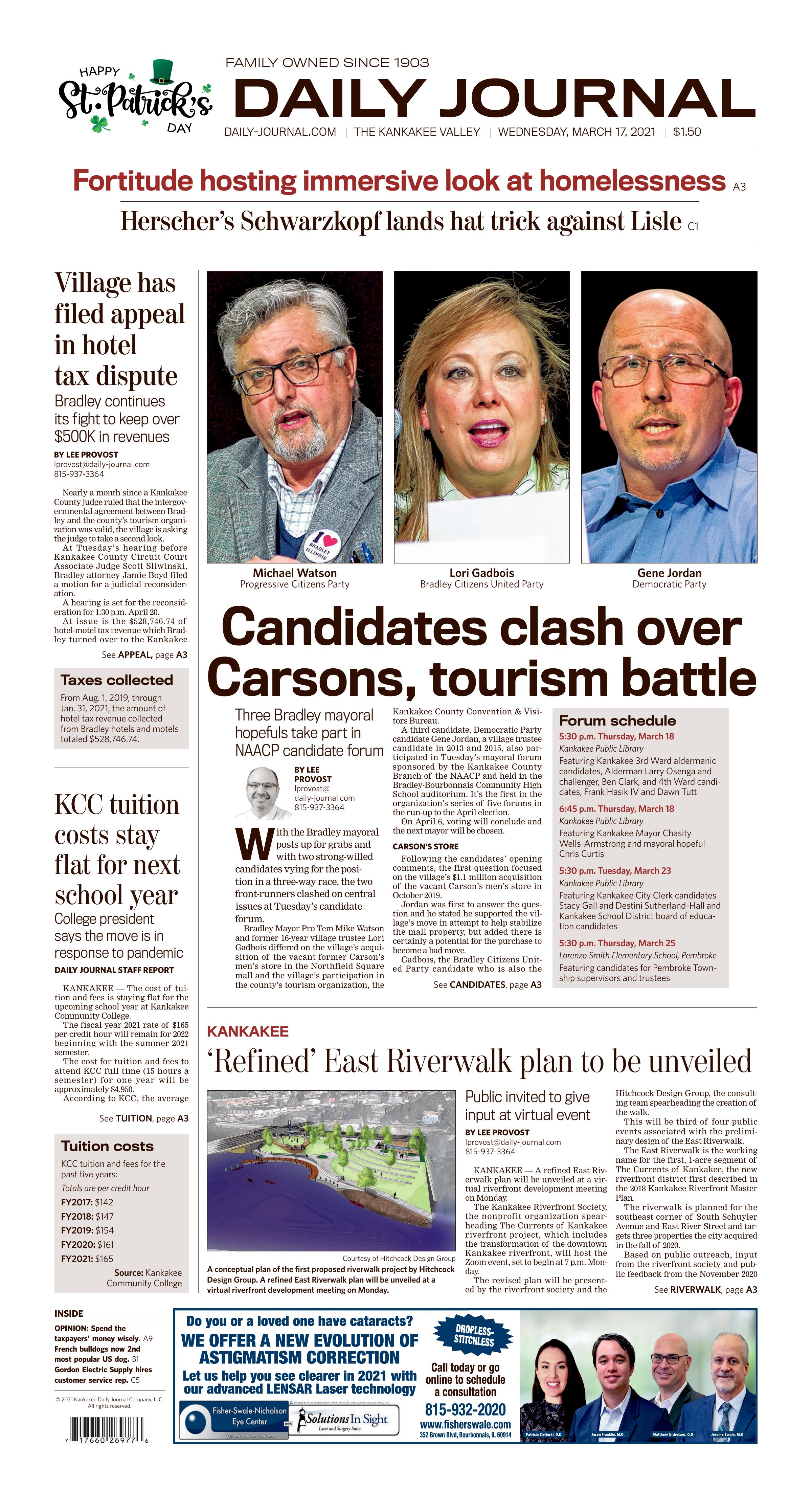 BRADLEY — With the Bradley mayoral posts up for grabs and with two strong-willed candidates vying for the position in a three-way race, the two front-runners clashed on central issues at Tuesday’s candidate forum.

A third candidate, Democratic Party candidate Gene Jordan, a village trustee candidate in 2013 and 2015, also participated in Tuesday’s mayoral forum sponsored by the Kankakee County Branch of the NAACP and held in the Bradley-Bourbonnais Community High School auditorium. It’s the first in the organization’s series of five forums in the run-up to the April election.

On April 6, voting will conclude and the next mayor will be chosen.

Following the candidates’ opening comments, the first question focused on the village’s $1.1 million acquisition of the vacant Carson’s men’s store in October 2019.

Jordan was first to answer the question and he stated he supported the village’s move in attempt to help stabilize the mall property, but added there is certainly a potential for the purchase to become a bad move.

Gadbois, the Bradley Citizens United Party candidate who is also the Kankakee County Recorder of Deeds, was critical of the village’s purchase due to the impact on the St. George School District. Because the property is government owned, it no longer pays property taxes and that move has harmed the St. George Grade School, which had been receiving those tax dollars.

“But never did I think the village would own any of this. I thought we would be a part of something there,” she said, referring to bringing potential investors or redevelopment options to the community.

Watson, the head of the village’s Progressive Citizens Party, said while the village has invested there, he noted he is confident the village will recapture its investment.

Regarding the future of the mall, Watson said the location will remain vital to the village. He said the mall may become more centered on entertainment and serve as a tourist attraction.

Gadbois recounted some of the history of the mall and stated the development was a longtime dream of former longtime resident, the late Ken Hayes. The complex opened in August 1990.

“He had a great vision. We all enjoyed that,” she said.

Gadbois said the lines have been opened between the village and the owners of the property.

Gadbois complimented Watson for the 1 percentage-point increase in the village’s sales tax rate, which voters approved in March 2020 by a 1,723-814 voting margin. The measure is pumping considerable income into the village. She questioned Watson as to why he had not brought it forward prior to becoming mayor pro tem following the resignation of then-Mayor Bruce Adams.

Watson said he tried as a trustee, but he could not where as the village board was then stacked against him. He said he advocated for the tax hike in March 2018, but the board and administration did not understand the concept.

Gadbois quickly interjected that Watson did not make such a presentation, but credited him for the increased revenue stream.

“It’s a great thing. I’ve given you credit,” she said.

Watson and Gadbois clearly differ on the village’s participation with the CVB.

Watson wants the village out of the organization and the village has been in a lengthy legal dispute to get that to happen as well as taking village-based hotel tax funds with it.

He has consistently stated the CVB does not promote Bradley well enough, especially since village-based hotels are the chief funding source of the organization.

“We win every time,” she said. “Why do we have to be misers? Bradley is not an island. We are dead set in the middle of the county.”

A conceptual plan of the first proposed riverwalk project by Hitchcock Design Group. A refined East Riverwalk plan will be unveiled at a virtual riverfront development meeting on Monday.

KANKAKEE — A refined East Riverwalk plan will be unveiled at a virtual riverfront development meeting on Monday.

The revised plan will be presented by the riverfront society and the Hitchcock Design Group, the consulting team spearheading the creation of the walk.

This will be third of four public events associated with the preliminary design of the East Riverwalk.

The East Riverwalk is the working name for the first, 1-acre segment of The Currents of Kankakee, the new riverfront district first described in the 2018 Kankakee Riverfront Master Plan.

The riverwalk is planned for the southeast corner of South Schuyler Avenue and East River Street and targets three properties the city acquired in the fall of 2020.

Based on public outreach, input from the riverfront society and public feedback from the November 2020 virtual open house, Hitchcock has refined the East Riverwalk concept. This concept will be put on display Monday.

Discussion will also focus on estimated costs, capital and operational funding, as well as an implementation timeline for this portion of the project.

The presenters will summarize and respond to viewers’ written questions at the end of the program.

Following input from the open house, the riverfront society and the consultants will finalize the East Riverwalk concept for presentation to the Kankakee City Council’s Economic Development Committee on March 25.

“Based on feedback from community leaders, local organizations and the general public, we know how much this initiative means to our future,” said Staci Wilken, chairwoman for the riverfront society.

• WHAT: Unveiling of refined East Riverwalk plan during virtual meeting

• WHO: Hosted by Kankakee Riverfront Society, the nonprofit organization spearheading The Currents of Kankakee riverfront project. Virtual event will be open to the public.

• QUESTIONS? The presenters will summarize and respond to viewers' written questions at the end of the program.

Jamie Boyd, the attorney representing Bradley, filed a motion for a judicial reconsideration for the village of Bradley.

Nearly a month since a Kankakee County judge ruled that the intergovernmental agreement between Bradley and the county’s tourism organization was valid, the village is asking the judge to take a second look.

At issue is the $528,746.74 of hotel-motel tax revenue which Bradley turned over to the Kankakee County Convention & Visitors Bureau at the end of February following Sliwinski’s ruling earlier that month.

Sliwinski ruled the disputed five-year intergovernmental agreement between Bradley and the CVB was a valid contract.

The current Bradley village administration has sought to get out of the contact approved by the then-outgoing Bradley Village Board in April 2019, thereby clearing a way for Bradley to institute its own hotel-motel tax and keep the money for its own tourism use.

KANKAKEE — The cost of tuition and fees is staying flat for the upcoming school year at Kankakee Community College.

The cost for tuition and fees to attend KCC full time (15 hours a semester) for one year will be approximately $4,950.

According to KCC, the average annual tuition and fees at the top eight universities where its students transfer to is approximately $17,111, not including room and board.

KCC President Michael Boyd said in a press release that the flat tuition rate is part of the college’s priority to give residents access to affordable education.

“Many of our students and their families suffered personal and financial losses during the pandemic, and it is essential that KCC is here for our community members while they rebuild,” he said.

The college encourages students in need of financial assistance to submit a Free Application for Federal Student Aid (FAFSA) to see what kind of assistance is available.

In 2019-20, 42 percent of KCC credit students received financial aid, with $3,855 being the average amount received per student, the college reported.

KCC begins enrollment for summer 2021 this month, and fall 2021 registration begins in April. Students can receive more information at register.kcc.edu and new students can apply at apply.kcc.edu.

KCC tuition and fees for the past five years:

Totals are per credit hour

Tuition and fees for nearby community colleges:

Totals are per credit hour

Per credit hour, based on 30 credit hours; does not include room and board:

University of Illinois at Urbana at Champaign: $562