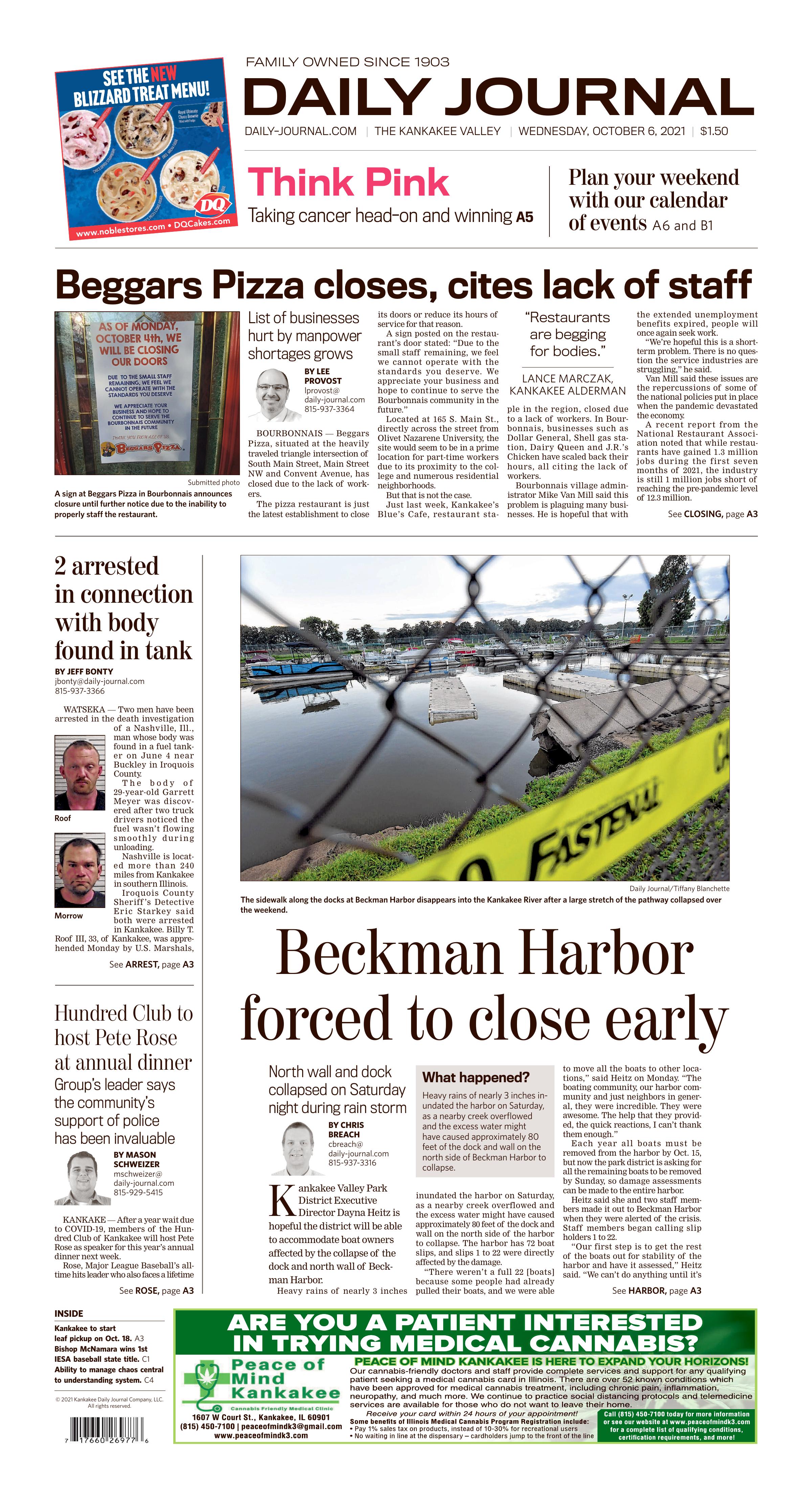 A sign at Beggars Pizza in Bourbonnais announces closure until further notice due to the inability to properly staff the restaurant.

BOURBONNAIS — Beggars Pizza, situated at the heavily traveled triangle intersection of South Main Street, Main Street NW and Convent Avenue, has closed due to the lack of workers.

The pizza restaurant is just the latest establishment to close its doors or reduce its hours of service for that reason.

A sign posted on the restaurant’s door stated: “Due to the small staff remaining, we feel we cannot operate with the standards you deserve. We appreciate your business and hope to continue to serve the Bourbonnais community in the future.”

Located at 165 S. Main St., directly across the street from Olivet Nazarene University, the site would seem to be in a prime location for part-time workers due to its proximity to the college and numerous residential neighborhoods.

But that is not the case.

Just last week, Kankakee’s Blue’s Cafe, restaurant staple in the region, closed due to a lack of workers. In Bourbonnais, businesses such as Dollar General, Shell gas station, Dairy Queen and J.R.’s Chicken have scaled back their hours, all citing the lack of workers.

Bourbonnais village administrator Mike Van Mill said this problem is plaguing many businesses. He is hopeful that with the extended unemployment benefits expired, people will once again seek work.

“We’re hopeful this is a short-term problem. There is no question the service industries are struggling,” he said.

Van Mill said these issues are the repercussions of some of the national policies put in place when the pandemic devastated the economy.

A recent report from the National Restaurant Association noted that while restaurants have gained 1.3 million jobs during the first seven months of 2021, the industry is still 1 million jobs short of reaching the pre-pandemic level of 12.3 million.

In Kankakee, 3rd Ward Alderman David Crawford questioned at Monday’s Kankakee City Council meeting if there would be an opportunity to use a portion of the American Rescue Plan Act funds which could be used to aid these small businesses to get through these harsh economic times.

While some workers have stated these businesses simply do not pay enough to attract workers, Crawford said the wages many people want will not allow the businesses to remain viable.

“Restaurants are begging for bodies,” he said.

Marczak wondered if programs such as the Kankakee High School culinary program could assist restaurants by either offering pay to students as they gain experience in the business or if they could gain school credit hours by working.

"Restaurants are begging for bodies."

The sidewalk along the docks at Beckman Harbor disappears into the Kankakee River after a large stretch of the pathway collapsed over the weekend.

A photo at Beckman Harbor from Saturday night shows the sidewalk, still connected to docks with boats tied to them, collapsing into the Kankakee River. The harbor is fenced in to prevent boats floating away.

The sidewalk along the docks at Beckman Harbor disappears into the Kankakee River after a large stretch of the pathway collapsed. READ MORE.

Kankakee Valley Park District Executive Director Dayna Heitz is hopeful the district will be able to accommodate boat owners affected by the collapse of the dock and north wall of Beckman Harbor.

Heavy rains of nearly 3 inches inundated the harbor on Saturday, as a nearby creek overflowed and the excess water might have caused approximately 80 feet of the dock and wall on the north side of the harbor to collapse. The harbor has 72 boat slips, and slips 1 to 22 were directly affected by the damage.

“There weren’t a full 22 [boats] because some people had already pulled their boats, and we were able to move all the boats to other locations,” said Heitz on Monday. “The boating community, our harbor community and just neighbors in general, they were incredible. They were awesome. The help that they provided, the quick reactions, I can’t thank them enough.”

Each year all boats must be removed from the harbor by Oct. 15, but now the park district is asking for all the remaining boats to be removed by Sunday, so damage assessments can be made to the entire harbor.

Heitz said she and two staff members made it out to Beckman Harbor when they were alerted of the crisis. Staff members began calling slip holders 1 to 22.

“Our first step is to get the rest of the boats out for stability of the harbor and have it assessed,” Heitz said. “We can’t do anything until it’s been assessed by our risk management, and then we will take out all the docks and the ramps that we can. We’re going to completely move them out of the harbor and fully close off the harbor. We will leave the ramp open and available because that’s for emergency purposes.”

Once the harbor has been inspected by insurance adjusters from Park District Risk Management Agency and civil engineers, KVPD will begin to know what might be the future of the harbor. It will likely be next year before repairs can be made.

“What are our options for this, especially if the riverbanks are constantly getting washed away and so forth?” Heitz said. “And what can I do to accommodate our boating community if it’s not rebuilt next year? ... I don’t know if we can take care of everybody because we have 72 slips in there now.

“I don’t think we have space to accommodate everybody along the riverbank, but we’re going to figure out how we can accommodate the most that we can. ... I want to make sure that they have a place, but I don’t know until we talk to the civil engineers what we can do, what our options are.”

HOW OLD IS THE HARBOR?

Heitz isn’t sure how old the harbor is because she hasn’t yet had time to check park district records, but she’s been told by a staff member that Beckman Harbor was constructed in the late 1950s or ‘60s. The harbor was also renovated at some point to allow for larger boats.

“I don’t know how long ago, and I don’t know what they did to reconstruct it, to be honest,” she said.

After the wall collapsed on Saturday night, Chris Karraker, who has a boat in the harbor, called KVPD staff member Greg Foster. Heitz said Foster called her right away, and the district responded.

“Everyone started heading in and dispatching staff, calling staff to see who could come in,” Heitz said.

Heavy rains of nearly 3 inches inundated the harbor on Saturday, as a nearby creek overflowed and the excess water might have caused approximately 80 feet of the dock and wall on the north side of Beckman Harbor to collapse.

"What are our options for this, especially if the riverbanks are constantly getting washed away and so forth?"

WATSEKA — Two men have been arrested in the death investigation of a Nashville, Ill., man whose body was found in a fuel tanker on June 4 near Buckley in Iroquois County.

The body of 29-year-old Garrett Meyer was discovered after two truck drivers noticed the fuel wasn’t flowing smoothly during unloading.

Nashville is located more than 240 miles from Kankakee in southern Illinois.

Both men were charged with possession of a stolen vehicle and concealment of a death, according to police reports. Roof was additionally charged with unlawful use of account numbers.

The vehicle and account numbers belonged to Meyer, Starkey said.

According to online court records, Morrow’s bond was set by a judge at $50,000. Roof has not had his initial hearing.

The investigation continues, Starkey said, adding that anyone with information can call investigators at 815-432-6992.

KANKAKE — After a year wait due to COVID-19, members of the Hundred Club of Kankakee will welcome Pete Rose as speaker for this year’s annual dinner next week.

Rose, Major League Baseball’s all-time hits leader who also faces a lifetime ban from the sport for gambling, will be the guest speaker at the dinner for the club, which was formed locally in 1967. Its mission is to support the families of first responders who are killed in the line of duty. Members, of which there are currently approximately 500, pay dues every year as a showing of support.

Hundred Club president Larry Osenga, a longtime Kankakee police officer who’s now been a part of the organization for two decades, said the support offered is something that can’t be measured.

“It’s invaluable — the way the police are being stigmatized these days, you have naysayers but a vast majority of people in this county and other communities around us know how important the police are,” Osenga said. “It’s an important organization and we do anything we can do.”

The dinner will be Oct. 13 at the Quality Inn and Suites in Bradley. Attendance is limited to paid club members only.

Interested members can learn more at the100clubkankakeecounty.org, or their Facebook page, @the100clubkankakeecounty. Due to an early reservation requirement because of COVID-19, new members will not be permitted at this year’s dinner, but speakers of similar stature, particularly in the sports world, are known to make appearances at the annual event. Past speakers include former ESPN analysts Lee Corso and Dick Vitale, former NFL players Ted Petersen, Mike Singletary and Tom Waddle, hall-of-fame college football coach Lou Holtz and Chicago Blackhawks broadcasters Pat Foley and Eddie Olczyk.