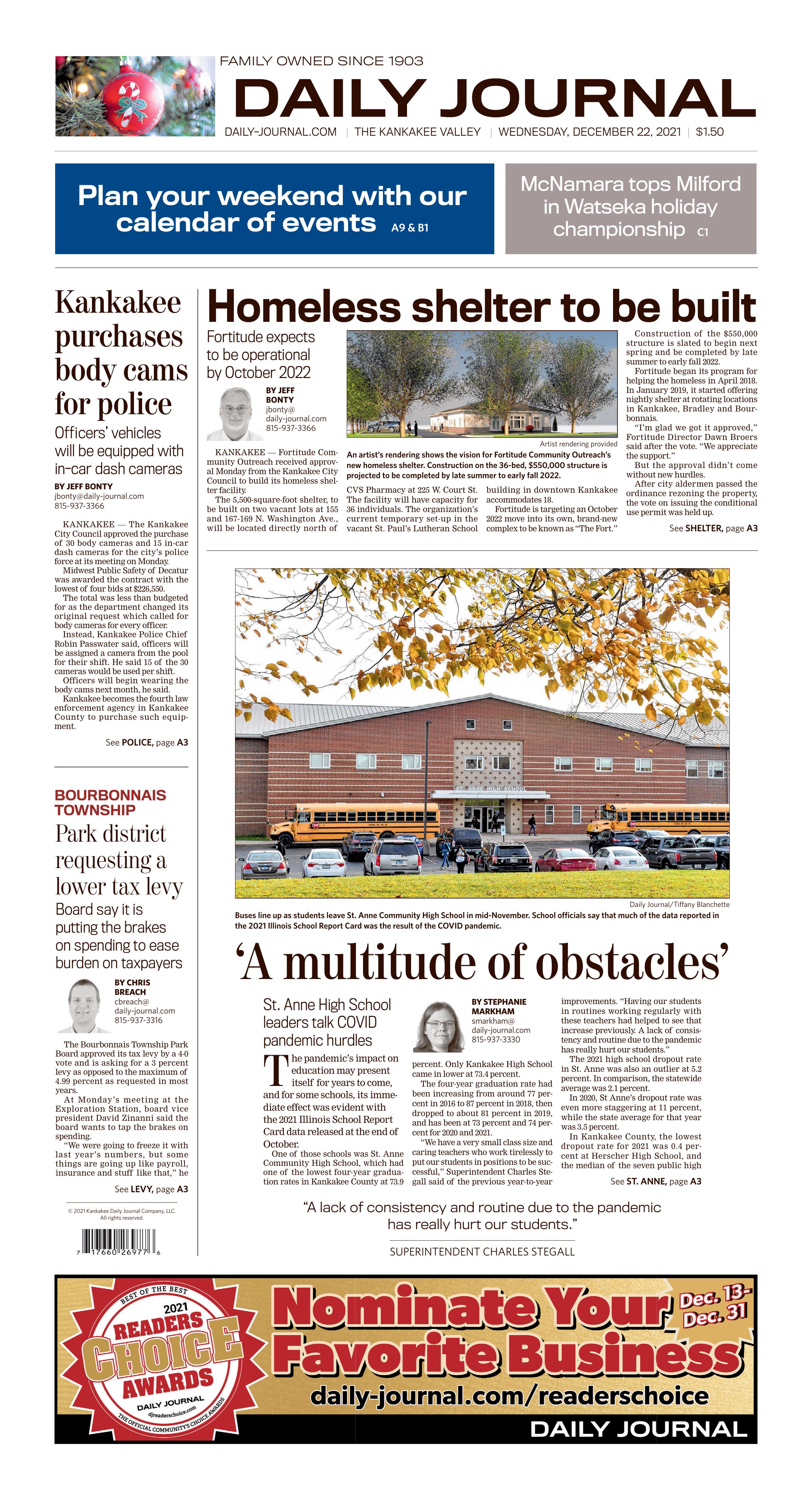 The 5,500-square-foot shelter, to be built on two vacant lots at 155 and 167-169 N. Washington Ave., will be located directly north of CVS Pharmacy at 225 W. Court St. The facility will have capacity for 36 individuals. The organization’s current temporary set-up in the vacant St. Paul’s Lutheran School building in downtown Kankakee accommodates 18.

Fortitude is targeting an October 2022 move into its own, brand-new complex to be known as “The Fort.”

Construction of the $550,000 structure is slated to begin next spring and be completed by late summer to early fall 2022.

Fortitude began its program for helping the homeless in April 2018. In January 2019, it started offering nightly shelter at rotating locations in Kankakee, Bradley and Bourbonnais.

“I’m glad we got it approved,” Fortitude Director Dawn Broers said after the vote. “We appreciate the support.”

But the approval didn’t come without new hurdles.

After city aldermen passed the ordinance rezoning the property, the vote on issuing the conditional use permit was held up.

Second Ward Alderman David Baron proposed an amendment that after two years, Fortitude would need to add daytime services. It would be a place that the homeless could receive counseling and other services.

“Within two years after the commencement of shelter operations at the facility, the applicant shall provide, or partner with another entity to provide, daytime shelter services at the facility generally on days after offering night shelter services and in compliance with an operational plan to be submitted by the applicant and approved by the Mayor,” was the wording of the proposed amendment.

Baron said this is the one time the city can put conditions in place.

“What Fortitude would do and has done is be a point of entry for the homeless housing system,” she said. “What this [amendment] will do is allow agencies to invest in the facility.”

She discussed possible funding from the U.S. Department of Housing and Urban Development.

During discussion of the amendment, 7th Ward Alderman Reginald D. Jones asked if this would be something Fortitude’s directors wanted to do.

“This is the ultimate question,” Jones said. “What do they want to do?”

Fortitude Board Director Jack Tyson said the ultimate goal is to provide services 24 hours a day but the organization has to be responsible on the financial side.

“We have to be fiscally responsible,” Tyson said. “Fiscal responsibility is being able to do this before taking any steps. As an objective, I am all for it. But before we make that commitment, I want to see progress.”

At this time, Tyson said, he could not see the organization being able to finance daytime services.

Broers said that agreeing to provide daytime service was not possible at this time. She said the organization would have to add $100,000 to its budget annually to accomplish it.

The amendment was voted down. Had it passed, Broers said, the organization would have pulled the ordinance for approval of the conditional use permit.

Buses line up as students leave St. Anne Community High School in mid-November. School officials say that much of the data reported in the 2021 Illinois School Report Card was the result of the COVID pandemic.

ST. ANNE — The pandemic’s impact on education may present itself for years to come, and for some schools, its immediate effect was evident with the 2021 Illinois School Report Card data released at the end of October.

One of those schools was St. Anne Community High School, which had one of the lowest four-year graduation rates in Kankakee County at 73.9 percent. Only Kankakee High School came in lower at 73.4 percent.

“We have a very small class size and caring teachers who work tirelessly to put our students in positions to be successful,” Superintendent Charles Stegall said of the previous year-to-year improvements. “Having our students in routines working regularly with these teachers had helped to see that increase previously. A lack of consistency and routine due to the pandemic has really hurt our students.”

The 2021 high school dropout rate in St. Anne was also an outlier at 5.2 percent. In comparison, the statewide average was 2.1 percent.

In 2020, St Anne’s dropout rate was even more staggering at 11 percent, while the state average for that year was 3.5 percent.

In Kankakee County, the lowest dropout rate for 2021 was 0.4 percent at Herscher High School, and the median of the seven public high schools was 1.9 percent at Manteno High School.

Stegall noted that St. Anne students already face challenges due to economic factors and mobility (students changing schools during a school year), and the pandemic undoubtedly compounded those existing hurdles.

“All districts have been faced with challenges during the last two years,” he said. “We already have a high percentage of our student population who are struggling daily due to situations outside of their control but then throw on top of that a worldwide pandemic, our student’s problems are exacerbated even more.”

About 73 percent of the high school’s 170 students are from low-income families, according to the 2021 report card data.

The data also counted 4.1 percent of students as homeless, meaning they do not have permanent or adequate homes.

The high school typically has a large number of transient students each year, and 81 percent of students receive free or reduced lunch, Stegall said.

“Place those [factors] on top of a worldwide pandemic and it doesn’t surprise us to see our numbers jump like that,” he said.

Certain factors can also contribute to a drastic change in the data because of how the state reporting system works, he added. For instance, some students will move to a school district for a month and then transfer out. Those students are reflected in the data despite only being with the district for a short time.

“We have sadly seen a number of students leave to go to another school and not enroll,” he explained. “When that happens, that negatively affects both our graduation rates and our drop-out rates.”

Principal Ramie Kolitwenzew added that, as freshmen, 22 percent of students in the Class of 2020 were not on track to graduate on time, and another 7 percent had failed at least one course.

“This class struggled significantly as freshmen and overcame a multitude of obstacles,” she said.

Koliwenzew also explained how student mobility in St. Anne contributes to the challenges students face when it comes to graduating on time.

When a student transfers in from a school which only offers six credits per year, versus the seven credits per year required at St. Anne, failing one class immediately puts that student off-track, she said.

“In the last 10 years, we have raised our graduation requirements from 23 credits to 26,” she said. “Students have very little wiggle room for failure.”

St. Anne also struggled with chronic absenteeism last school year; the data indicates the high school had a chronic absenteeism rate of 37 percent. While this was above the statewide average of 21.2 percent, it was not the highest rate in the county.

The Illinois State Board of Education has indicated that student attendance and other data for 2021 may have been affected by the pandemic, and differences in how schools took attendance during remote learning were key variables.

Further Illinois School Report Card data released in early December showed standardized test scores for many schools across the state. In St. Anne, it showed that 17 percent of students achieved proficiency in English language arts on the SAT, while 4 percent achieved proficiency in math. The numbers are down from 2019, when proficiency rates were 25 percent for English and 14 percent in math.

"A lack of consistency and routine due to the pandemic has really hurt our students.”

KANKAKEE — The Kankakee City Council approved the purchase of 30 body cameras and 15 in-car dash cameras for the city’s police force at its meeting on Monday.

Midwest Public Safety of Decatur was awarded the contract with the lowest of four bids at $226,550.

The total was less than budgeted for as the department changed its original request which called for body cameras for every officer.

Instead, Kankakee Police Chief Robin Passwater said, officers will be assigned a camera from the pool for their shift. He said 15 of the 30 cameras would be used per shift.

Officers will begin wearing the body cams next month, he said.

A sweeping criminal reform bill signed into law by Gov. JB Pritzker in February requires all police departments in Illinois to have body cams in use by 2025. The law did not provide funding avenues for the equipment or relating costs.

Kankakee’s system will be the same brand used by Bourbonnais police and the Kankakee County Sheriff’s Department.

Bourbonnais was the first agency in the county to start using the cameras back in 2015. They have 24 body cameras and all 14 of their squad cars have in-car dash cameras, according to Bourbonnais Deputy Police Chief David Anderson.

The Bourbonnais Township Park Board approved its tax levy by a 4-0 vote and is asking for a 3 percent levy as opposed to the maximum of 4.99 percent as requested in most years.

At Monday’s meeting at the Exploration Station, board vice president David Zinanni said the board wants to tap the brakes on spending.

“We were going to freeze it with last year’s numbers, but some things are going up like payroll, insurance and stuff like that,” he said. “We always ask for 4.99 [percent]. We hear schools are going to ask for more, so we just wanted to give everybody a break.”

It’s likely the lowest levy the BTPD has asked for since 2007, when the district had just a 1 percent levy.

“Actually, we’ve been all over the board, but we usually settle for 4.99,” said Hollice Clark, executive director of the BTPD. “I know there’s been some years that were lower.”

Clark said if you don’t get the highest percent of the levy, the money goes to other taxing bodies.

Clark said for this past year, a person owning a home worth $250,000 in Bradley paid approximately $253 in taxes for the BTPD, which includes a portion for pensions.

The levy will be filed with the Kankakee County Clerk’s office. How much the district receives will be finalized once the equalized assessed valuation of property is made in April.