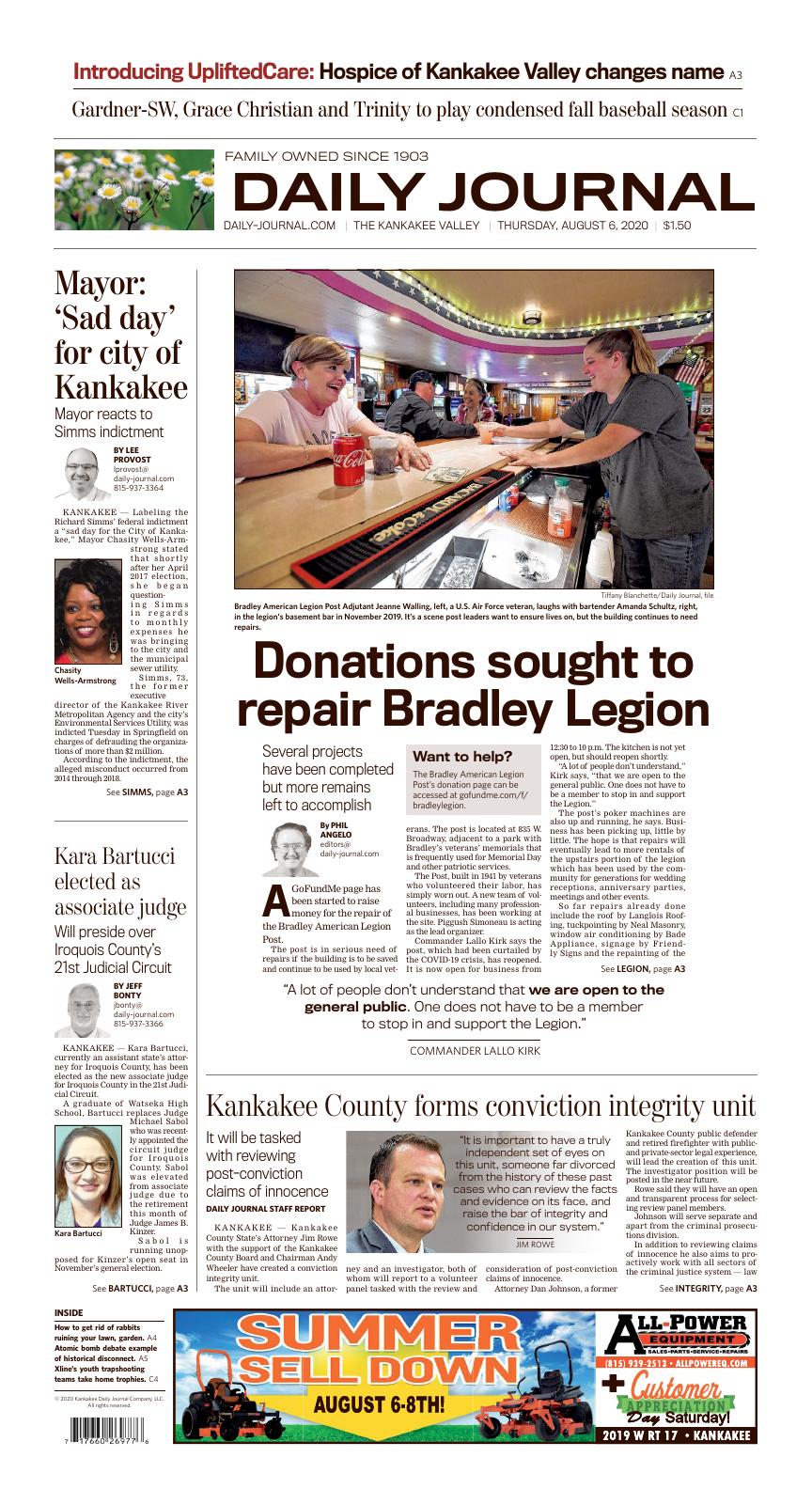 BRADLEY — A GoFundMe page has been started to raise money for the repair of the Bradley American Legion Post.

The post is in serious need of repairs if the building is to be saved and continue to be used by local veterans. The post is located at 835 W. Broadway, adjacent to a park with Bradley’s veterans’ memorials that is frequently used for Memorial Day and other patriotic services.

The Post, built in 1941 by veterans who volunteered their labor, has simply worn out. A new team of volunteers, including many professional businesses, has been working at the site. Piggush Simoneau is acting as the lead organizer.

Commander Lallo Kirk says the post, which had been curtailed by the COVID-19 crisis, has reopened. It is now open for business from 12:30 to 10 p.m. The kitchen is not yet open, but should reopen shortly.

“A lot of people don’t understand,” Kirk says, “that we are open to the general public. One does not have to be a member to stop in and support the Legion.”

The post’s poker machines are also up and running, he says. Business has been picking up, little by little. The hope is that repairs will eventually lead to more rentals of the upstairs portion of the legion which has been used by the community for generations for wedding receptions, anniversary parties, meetings and other events.

So far repairs already done include the roof by Langlois Roofing, tuckpointing by Neal Masonry, window air conditioning by Bade Appliance, signage by Friendly Signs and the repainting of the eagle by Reynolds Painting. Also volunteering and participating are Kankakee Tent and Awning, Laborers Local 751, Sheet Metal Local 751 and Kankakee Community College Construction Trades. Still to come are the main air conditioning, ceiling work and lighting. The lighting has been donated, but installation remains on the to-do list.

One of the founding members was Catholic chaplain Harris Anthony Darche, the most decorated chaplain of World War I. He was the national chaplain of the American Legion in 1931. A Bourbonnais native who graduated from St. Viator’s College, he was awarded the Navy Cross, the Croix de Guerre and the Legion of Honor during the war. He died in 1937 from the lingering effects of a mustard gas attack during the war. A plaque honoring Fr. Darche is affixed to a boulder outside the post.

During World War II, the Village of Bradley was noted for its patriotism. Bradley had 520 men and women serve in the war. The village was credited with the third-highest percentage serving of any municipality in the nation. Nineteen Bradley residents died in the war.

The Bradley American Legion Post's donation page can be accessed at gofundme.com/f/bradleylegion.

“A lot of people don’t understand that we are open to the general public. One does not have to be a member to stop in and support the Legion.”

“It is important to have a truly independent set of eyes on this unit, someone far divorced from the history of these past cases who can review the facts and evidence on its face, and raise the bar of integrity and confidence in our system.”

The unit will include an attorney and an investigator, both of whom will report to a volunteer panel tasked with the review and consideration of post-conviction claims of innocence.

Attorney Dan Johnson, a former Kankakee County public defender and retired firefighter with public- and private-sector legal experience, will lead the creation of this unit. The investigator position will be posted in the near future.

Rowe said they will have an open and transparent process for selecting review panel members.

Johnson will serve separate and apart from the criminal prosecutions division.

In addition to reviewing claims of innocence he also aims to proactively work with all sectors of the criminal justice system — law enforcement, prosecutors, public defenders, the private bar and the judiciary — to provide training and ensure best practices and policies are implemented to avoid wrongful convictions.

“It is important to have a truly independent set of eyes on this unit, someone far divorced from the history of these past cases who can review the facts and evidence on its face, and raise the bar of integrity and confidence in our system,” Rowe said in a news release.

“I am confident that Dan Johnson fits that mold,” he said. “With so much at stake, we can never be afraid to do what is right. Our job as prosecutors is to seek justice, not mere convictions. I am well aware that the criminal justice system is not perfect, but I am willing to invest the time and hard work to make it better, and this initiative does that.”

Wheeler noted that “Even with the highest standards of jurisprudence, and systems in place to minimize the possibility of anyone being convicted for a crime they did not commit, we all know there are times when new evidence comes to light that casts doubt on previous convictions.

“Having a thorough, non-biased review in one of these rare situations is in everyone’s best interest, as is having best-practices and training in place to further reduce the possibility of this occurring in the first place.

“The financial cost of wrongful conviction is substantial for county taxpayers, but the human cost to those wrongfully convicted far surpasses just dollars and cents.”

KANKAKEE — Labeling the Richard Simms’ federal indictment a “sad day for the City of Kankakee,” Mayor Chasity Wells-Armstrong stated that shortly after her April 2017 election, she began questioning Simms in regards to monthly expenses he was bringing to the city and the municipal sewer utility.

Simms, 73, the former executive director of the Kankakee River Metropolitan Agency and the city’s Environmental Services Utility, was indicted Tuesday in Springfield on charges of defrauding the organizations of more than $2 million.

According to the indictment, the alleged misconduct occurred from 2014 through 2018.

The Daily Journal reported as early as March 2019 that Simms was being investigated by the U.S. Attorney’s office. The paper’s review of Simms’ dealing with KRMA began in November 2018.

In a one-page news release from Wells-Armstrong issued Wednesday afternoon, the mayor stated shortly after her mayoral election over then-Mayor Nina Epstein, she questioned the $66,000-a-month payments from the city and KRMA to Simms.

The mayor stated that following an extensive investigation by herself and others within the administration, payments to Simms were stopped. Simms retired from the city in April 2018.

The mayor stated she refused to pay the Simms’ invoices because “no answers were forthcoming from Simms that justified the compensation he was charging both entities.”

Represented by former city corporate counsel Chris Bohlen, Simms sued the city for payment of his last two invoices, according to a press release.

Wells-Armstrong noted the city has countersued Simms for $1.5 million he received from the city. She said it was her pursuit of the questionable payments, as well as bringing the issues to the U.S. Attorney, which led to the Department of Justice inquiry and the U.S. Attorney’s charges against Simms.

“The city will continue to pursue its civil action against Simms to recover the money that was paid to him and his firm,” she said “His payments were immediately questioned by me, but no adequate answers were received, so the payments were stopped, ending his employment with the city and KRMA.”

In the mayor’s statement, she also focused attention on Bohlen’s activity in the matter.

She stated prior to her questioning of Simms, Bohlen was in charge of the legal affairs of the city, “including the inner workings of KRMA and ESU.”

“Not only was Bohlen the city attorney representing the city when Simms began his fraudulent schemes in March 2014, he has now been representing Simms in a suit against the city in an effort to collect on his last two invoices,” she said.

Reached late Wednesday, Bohlen said he is confused as to why the mayor would target him.

“When I was corporate counsel for the city, we complied with the laws and statues of this state,” he said. “As far as I know, ESU and KRMA approved his checks. I had no supervision of either ESU or KRMA at any time,” he said.

Bohlen also noted the mayor hired Simms to stay on as executive director for the first year of her of her four-year term.

“He stayed on for the full year he promised to stay,” Bohlen said.

A graduate of Watseka High School, Bartucci replaces Judge Michael Sabol who was recently appointed the circuit judge for Iroquois County. Sabol was elevated from associate judge due to the retirement this month of Judge James B. Kinzer.

Bartucci, 35, will be sworn in during a ceremony at 4 p.m. Friday at the Iroquois County Courthouse. She applied on two other occasions for vacant associate judge seats.

“A few years after practicing law, I felt I wanted to become a judge. I came to the realization of how great the legal community is here,” Bartucci said. “The judges are supportive and knowledgeable.”

Bartucci said the 21st circuit’s legal community is supportive of one another. She said when she was in private practice, other counties didn’t have this.

“I’ve talked to other attorneys I went to law school and they don’t have this. It is heartbreaking. We have a strong legal community here.”

“Kara is respected by the judges. She is a great fit and has a great temperament,” Devine said. “Some may have concerns due to her young age, but she has a lot of wisdom at a youthful age.”

The judges of the 21st Circuit chose Bartucci over six other applicants, all of which were local attorneys.

“These appointments allow for cases to continue to be heard in Iroquois County without the need to send a substitute judge from Kankakee County.”

Bartucci, who is married to Robert Bartucci, was admitted to practice law in November 2010. She was in private practice from 2010-12 and was an assistant state’s attorney from 2012-15 in Kankakee County and in Iroquois County since 2016.

When Bartucci was in private practice she handled a wide variety of cases, from foreclosures to family law and more. While working in the state’s attorney’s office, she handled felonies, misdemeanors, traffic, juvenile cases, misdemeanor bench trials, civil law complaints and ordinance violations. 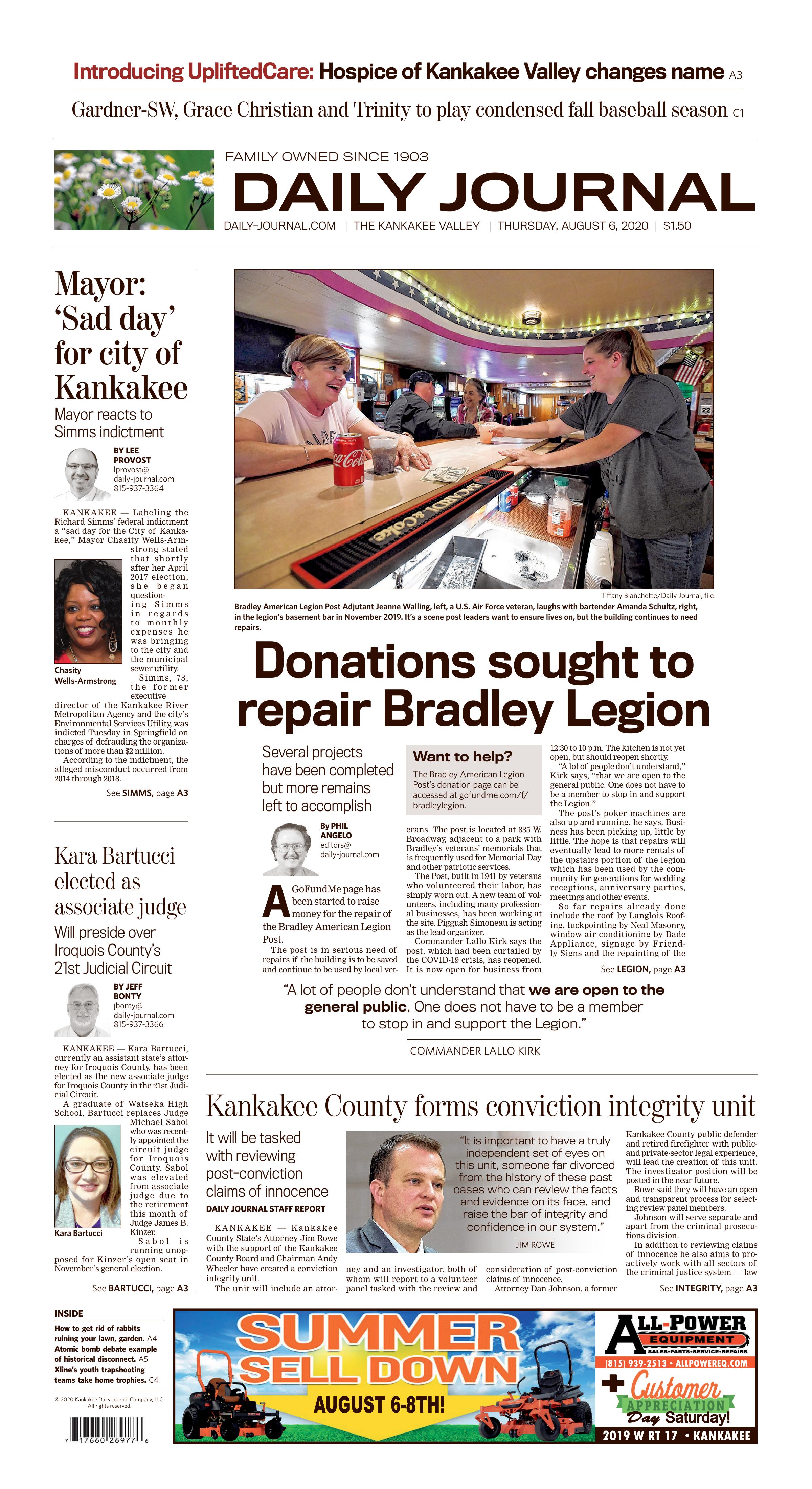