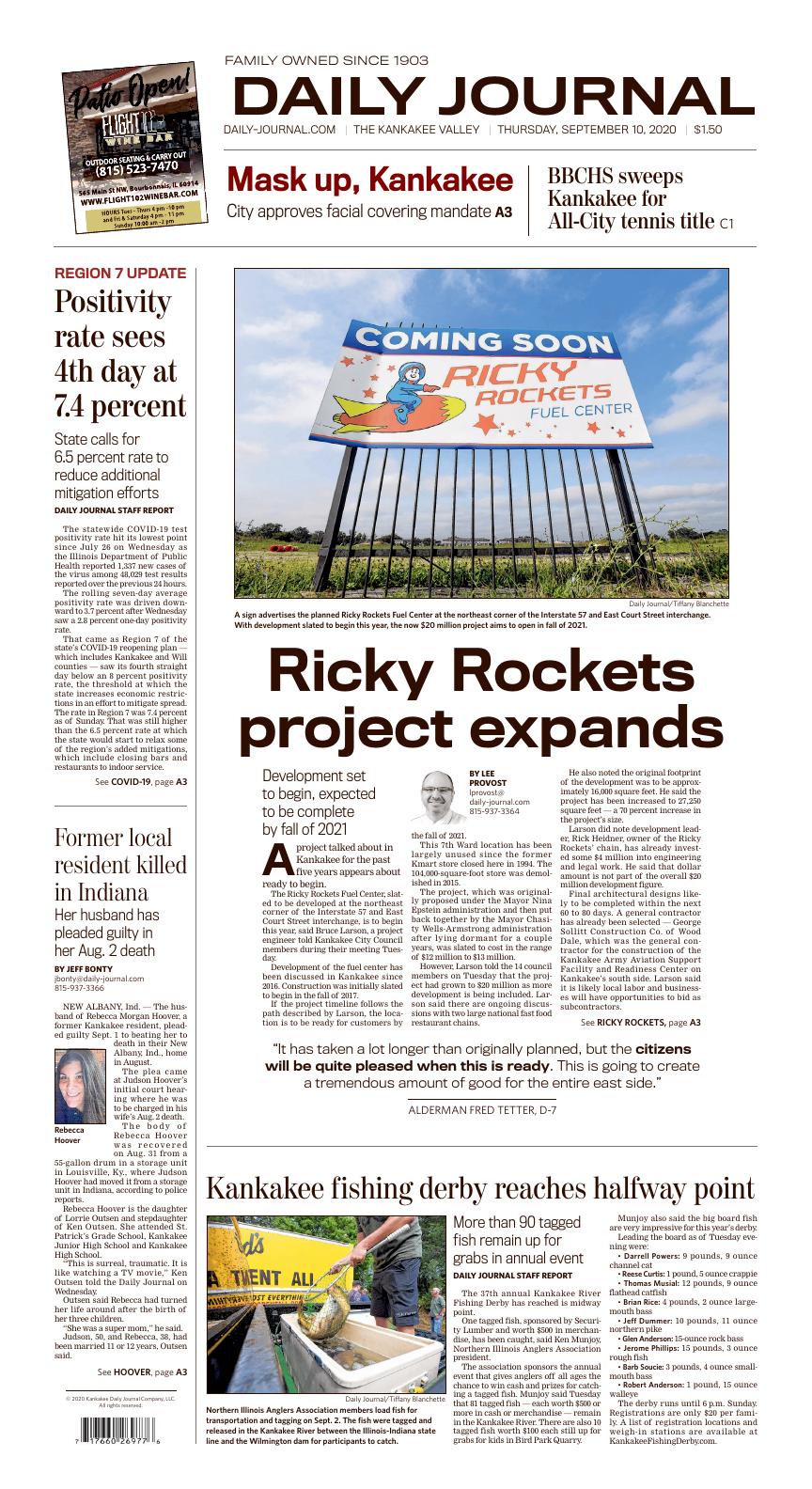 A sign advertises the planned Ricky Rockets Fuel Center at the northeast corner of the Interstate 57 and East Court Street interchange. With development slated to begin this year, the now $20 million project aims to open in fall of 2021.

KANKAKEE — A project talked about in Kankakee for the past five years appears about ready to begin.

The Ricky Rockets Fuel Center, slated to be developed at the northeast corner of the Interstate 57 and East Court Street interchange, is to begin this year, said Bruce Larson, a project engineer told Kankakee City Council members during their meeting Tuesday.

Development of the fuel center has been discussed in Kankakee since 2016. Construction was initially slated to begin in the fall of 2017.

If the project timeline follows the path described by Larson, the location is to be ready for customers by the fall of 2021.

This 7th Ward location has been largely unused since the former Kmart store closed here in 1994. The 104,000-square-foot store was demolished in 2015.

The project, which was originally proposed under the Mayor Nina Epstein administration and then put back together by the Mayor Chasity Wells-Armstrong administration after lying dormant for a couple years, was slated to cost in the range of $12 million to $13 million.

However, Larson told the 14 council members on Tuesday that the project had grown to $20 million as more development is being included. Larson said there are ongoing discussions with two large national fast food restaurant chains.

He also noted the original footprint of the development was to be approximately 16,000 square feet. He said the project has been increased to 27,250 square feet — a 70 percent increase in the project’s size.

Larson did note development leader, Rick Heidner, owner of the Ricky Rockets’ chain, has already invested some $4 million into engineering and legal work. He said that dollar amount is not part of the overall $20 million development figure.

Final architectural designs likely to be completed within the next 60 to 80 days. A general contractor has already been selected — George Sollitt Construction Co. of Wood Dale, which was the general contractor for the construction of the Kankakee Army Aviation Support Facility and Readiness Center on Kankakee’s south side. Larson said it is likely local labor and businesses will have opportunities to bid as subcontractors.

The site will also include 7,000 square feet of undeveloped space for future retail.

“We are trying to maximize as much as we can,” Larson told the council by telephone. “We believe this will be one of our most successful sites. We believe this investment will be worth it. We are comfortable with the city and the location.”

Once construction begins, Larson said the goal is not to stop until the project is finished.

“We have to finish this fast. Money is too expensive to drag this out,” he said.

He noted Heidner has started a new development in Hickory Hills about three weeks ago so there is much happening with the Ricky Rockets brand.

Currently, the company has five fuel centers in operation. It has two locations in Hoffman Estates and single locations in Midlothian and South Elgin as well as one in Garland, Texas.

Alderman Fred Tetter, D-7 and chairman of the council’s Economic Development Committee, said after the meeting the project is long overdue.

“It has taken a lot longer than originally planned, but the citizens will be quite pleased when this is ready. This is going to create a tremendous amount of good for the entire east side,” he said.

“This is a win for the entire city.”

"It has taken a lot longer than originally planned, but the citizens will be quite pleased when this is ready. This is going to create a tremendous amount of good for the entire east side."

One tagged fish, sponsored by Security Lumber and worth $500 in merchandise, has been caught, said Ken Munjoy, Northern Illinois Anglers Association president.

The association sponsors the annual event that gives anglers off all ages the chance to win cash and prizes for catching a tagged fish. Munjoy said Tuesday that 81 tagged fish — each worth $500 or more in cash or merchandise — remain in the Kankakee River. There are also 10 tagged fish worth $100 each still up for grabs for kids in Bird Park Quarry.

Munjoy also said the big board fish are very impressive for this year’s derby.

Leading the board as of Tuesday evening were:

The derby runs until 6 p.m. Sunday. Registrations are only $20 per family. A list of registration locations and weigh-in stations are available at KankakeeFishingDerby.com.

Riverside Healthcare RN Allison Betourne administers a COVID-19 swab test in May at King Middle School during a mobile testing event offered to the general public of Kankakee County.

The statewide COVID-19 test positivity rate hit its lowest point since July 26 on Wednesday as the Illinois Department of Public Health reported 1,337 new cases of the virus among 48,029 test results reported over the previous 24 hours.

That came as Region 7 of the state’s COVID-19 reopening plan — which includes Kankakee and Will counties — saw its fourth straight day below an 8 percent positivity rate, the threshold at which the state increases economic restrictions in an effort to mitigate spread. The rate in Region 7 was 7.4 percent as of Sunday. That was still higher than the 6.5 percent rate at which the state would start to relax some of the region’s added mitigations, which include closing bars and restaurants to indoor service.

The additional mitigations for Region 7 were put in place on Aug. 26 and were to be in effect for 14 days before review. During a press conference on Aug. 25, Gov. JB Pritzker outlined the requirements for exiting the mitigation phase. If the average positivity rate stays at 6.5 percent or lower for 14 days, the region will return to Phase 4 restrictions under the Restore Illinois plan, Pritzker said.

If the average positivity rate stays between 6.5 and 8 percent, the Illinois Department of Public Health will continue to monitor the region to determine if additional restrictions are needed or if they can be removed.

If the average positivity rate stays at 8 percent or higher for 14 days, more stringent restrictions will be applied, Pritzker said.

In Region 4, which includes the Metro East area on the Missouri border and is also under additional restrictions, the positivity rate remained stubbornly high as of Sunday, increasing one-tenth of a percentage point from the day prior to 9.9 percent.

NEW ALBANY, Ind. — The husband of Rebecca Morgan Hoover, a former Kankakee resident, pleaded guilty Sept. 1 to beating her to death in their New Albany, Ind., home in August.

The plea came at Judson Hoover’s initial court hearing where he was to be charged in his wife’s Aug. 2 death.

“This is surreal, traumatic. It is like watching a TV movie,” Ken Outsen told the Daily Journal on Wednesday.

Outsen said Rebecca had turned her life around after the birth of her three children.

According to media reports citing police records, Judson killed Rebecca on Aug. 2 in the basement of their New Albany home.

Lorrie Outsen contacted New Albany police Aug. 5 and reported her disappearance, having not heard from her daughter.

Reports said Judson filed for divorce on Aug. 5. He was granted custody of the children when Rebecca Hoover did not show for a hearing on Aug. 21.

The break in the case came Aug. 27, when one of the couple’s children told a school counselor he saw his father beat his mother.

A search of the house found what was believed to be blood splatter in the basement.

In April, Judson Hoover was arrested and charged with domestic battery and strangulation. The next court date was Sept. 22.

“We all told her to get out of there before something bad was going to happen,” Ken Outsen said.

Now he and his ex-wife are working with Indiana children and family service officials who have custody of the children.

“They all need our help,” Ken Outsen said.

Judson Hoover said he decided to plead guilty so his child would not have to testify at trial. He is scheduled to be sentenced on Oct. 2.

The Outsens will be there.

“We’re here to speak for her and all the other thousands of domestic violence victims,” Ken Outsen said.

The family of Rebecca Morgan Hoover has set up two fund pages to help pay for her funeral expenses and for her children. 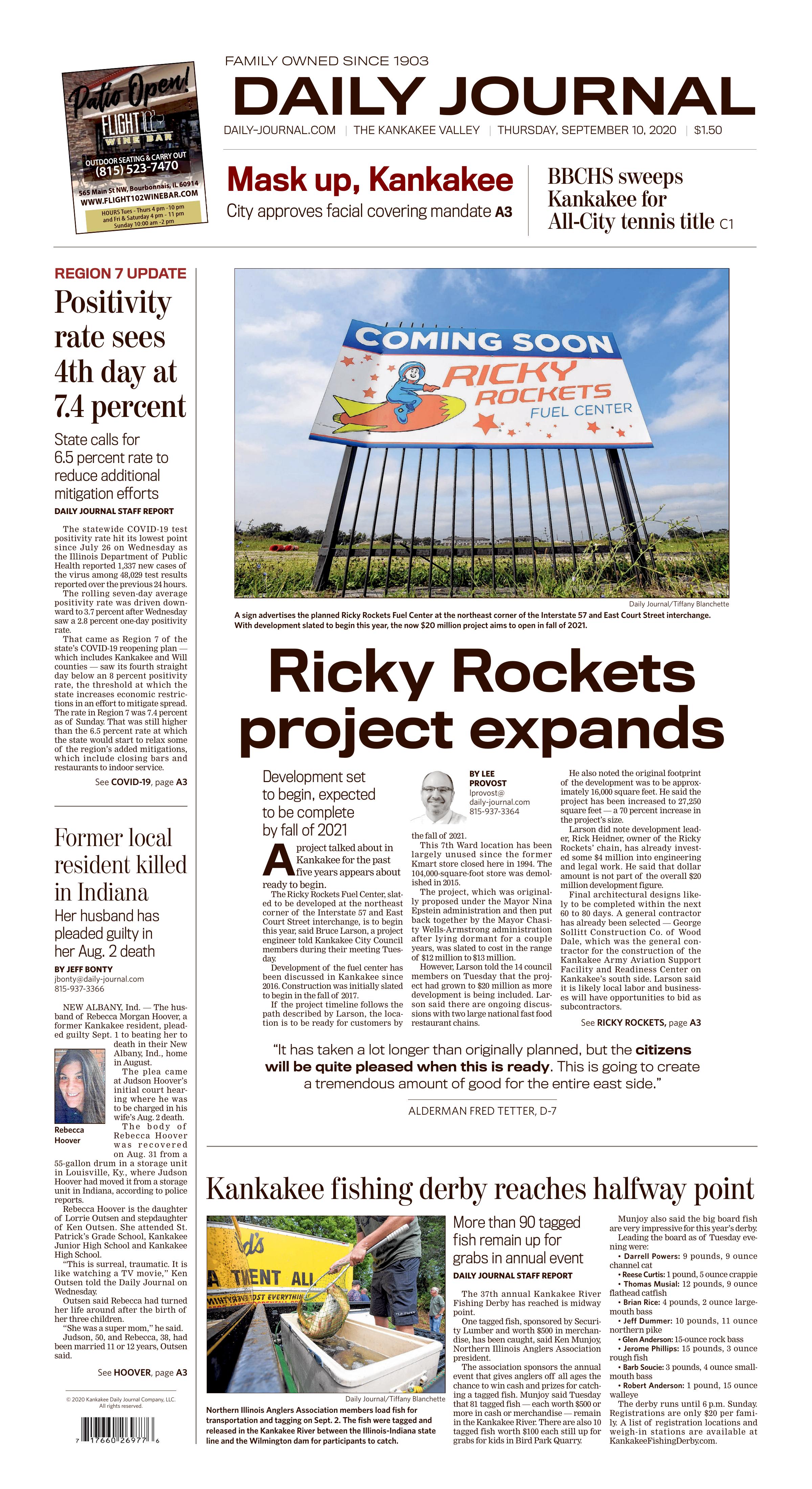