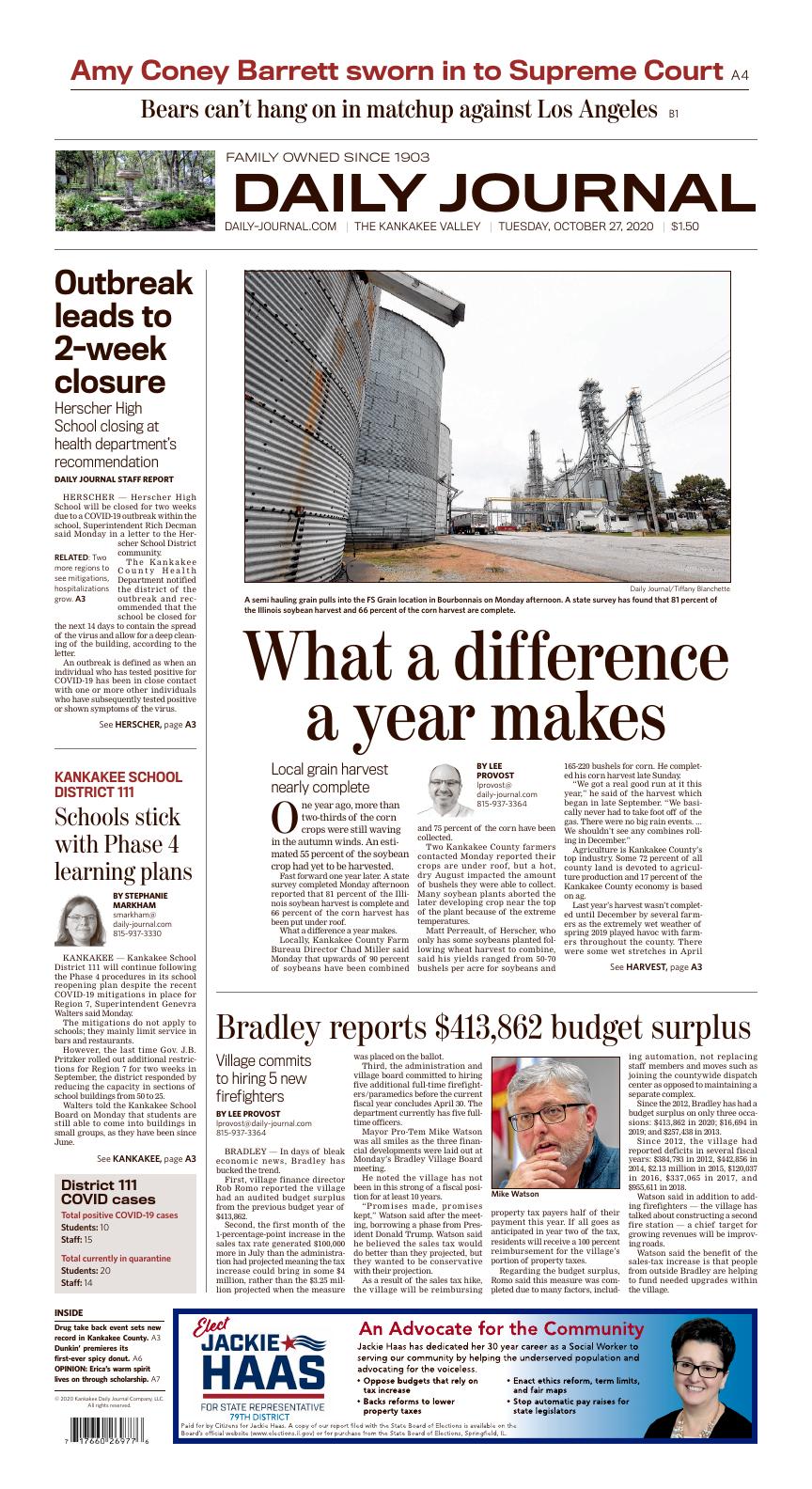 A semi hauling grain pulls into the FS Grain location in Bourbonnais on Monday afternoon. A state survey has found that 81 percent of the Illinois soybean harvest and 66 percent of the corn harvest are complete.

A semi hauling grain pulls into the FS Grain location in Bourbonnais on Monday afternoon.

A farmer harvests corn near Momence in October 2018.

HERSCHER — One year ago, more than two-thirds of the corn crops were still waving in the autumn winds. An estimated 55 percent of the soybean crop had yet to be harvested.

Fast forward one year later. A state survey completed Monday afternoon reported that 81 percent of the Illinois soybean harvest is complete and 66 percent of the corn harvest has been put under roof.

What a difference a year makes.

Locally, Kankakee County Farm Bureau Director Chad Miller said Monday that upwards of 90 percent of soybeans have been combined and 75 percent of the corn have been collected.

Two Kankakee County farmers contacted Monday reported their crops are under roof, but a hot, dry August impacted the amount of bushels they were able to collect. Many soybean plants aborted the later developing crop near the top of the plant because of the extreme temperatures.

Matt Perreault, of Herscher, who only has some soybeans planted following wheat harvest to combine, said his yields ranged from 50-70 bushels per acre for soybeans and 165-220 bushels for corn. He completed his corn harvest late Sunday.

“We got a real good run at it this year,” he said of the harvest which began in late September. “We basically never had to take foot off of the gas. There were no big rain events. ... We shouldn’t see any combines rolling in December.”

Last year’s harvest wasn’t completed until December by several farmers as the extremely wet weather of spring 2019 played havoc with farmers throughout the county. There were some wet stretches in April 2020, but by and large the crop got into the ground on time or only mildly behind schedule.

Perreault acknowledged that after 2019, almost anything which happened this year was going to be better. Perreault, like so many growers last year, was unable to get any or only a fraction of his corn seed into the ground.

However, 2020 will be one of those years farmers will be thinking about a harvest which got away.

Perreault and Kankakee-area farmer Jeff O’Connor both stated that the early and mid-growing season of June and July had all the makings of a huge harvest. However, it ultimately was not to be.

“The steam ran out in August,” Perreault said.

O’Connor, who completed his harvest last week, noted that Miller is correct, soybean and corn yields were not as strong as farmers had been targeting.

But, O’Connor noted, grain prices have risen. He said since early summer, per-bushel soybean prices have gone from about $9 to $11 and corn has increased from $3.25 to the $4 range. A large portion of that increase can be attributed to growing grain demands in China.

O’Connor noted growers are at the mercy of the market.

“We are yield creators and price accepters,” he said.

Whatever the pricing situation, O’Connor noted it’s a good feeling when the crop is in the grain bin.

“If I can be done by Halloween every year, I’ll take that.”

BRADLEY — In days of bleak economic news, Bradley has bucked the trend.

First, village finance director Rob Romo reported the village had an audited budget surplus from the previous budget year of $413,862.

Second, the first month of the 1-percentage-point increase in the sales tax rate generated $100,000 more in July than the administration had projected meaning the tax increase could bring in some $4 million, rather than the $3.25 million projected when the measure was placed on the ballot.

Mayor Pro-Tem Mike Watson was all smiles as the three financial developments were laid out at Monday’s Bradley Village Board meeting.

He noted the village has not been in this strong of a fiscal position for at least 10 years.

“Promises made, promises kept,” Watson said after the meeting, borrowing a phase from President Donald Trump. Watson said he believed the sales tax would do better than they projected, but they wanted to be conservative with their projection.

As a result of the sales tax hike, the village will be reimbursing property tax payers half of their payment this year. If all goes as anticipated in year two of the tax, residents will receive a 100 percent reimbursement for the village’s portion of property taxes.

Regarding the budget surplus, Romo said this measure was completed due to many factors, including automation, not replacing staff members and moves such as joining the countywide dispatch center as opposed to maintaining a separate complex.

Watson said in addition to adding firefighters — the village has talked about constructing a second fire station — a chief target for growing revenues will be improving roads.

Watson said the benefit of the sales-tax increase is that people from outside Bradley are helping to fund needed upgrades within the village.

HERSCHER — Herscher High School will be closed for two weeks due to a COVID-19 outbreak within the school, Superintendent Rich Decman said Monday in a letter to the Herscher School District community.

The Kankakee County Health Department notified the district of the outbreak and recommended that the school be closed for the next 14 days to contain the spread of the virus and allow for a deep cleaning of the building, according to the letter.

An outbreak is defined as when an individual who has tested positive for COVID-19 has been in close contact with one or more other individuals who have subsequently tested positive or shown symptoms of the virus.

The health department specified that more than one HHS student who has tested positive or shown symptoms for COVID-19, along with other students known to have been in close proximity to them, have now tested positive or are showing symptoms, according to the letter.

In response, HHS will be closed to student attendance from Tuesday until Nov. 9.

From Wednesday through Nov. 9, all HHS students will receive remote instruction from their teachers.

HHS students may return to in-person instruction on Nov. 10.

Last week, the school district reported a total of eight new student COVID-19 cases, five of whom were HHS students. The cases were not known to have been linked with one another, according to previous district communications.

As of Thursday, there were a total of 19 student cases and one staff case reported district-wide since the school year started.

Students may stop by the high school to pick up necessary educational items but must report to the office when entering the building.

Bus service, lunch service and after-school care will remain for the pre-kindergarten through eighth-grade schools, with the exception of Tuesday. Lunches will be available for high school students as well.

The mitigations do not apply to schools; they mainly limit service in bars and restaurants.

However, the last time Gov. J.B. Pritzker rolled out additional restrictions for Region 7 for two weeks in September, the district responded by reducing the capacity in sections of school buildings from 50 to 25.

Walters told the Kankakee School Board on Monday that students are still able to come into buildings in small groups, as they have been since June.

The district is not implementing any changes in response to this new round of restrictions.

“I see no need to roll the school district back,” she said. “We are going to continue with our Phase 4 plan through this second [quarter], then we’ll decide what we are doing for January in December.”

About 3,000 students participated in summer school this year, some in person and some remotely, following the same procedures that are in place now, Walters noted.

When the second quarter started Oct. 19, the district began requiring all blended learners in the district to attend school for a minimum of two days per week.

In the first quarter, blended learners scheduled times to get in-person support from teachers as needed.

Starting this weekend, the district will be opening Kankakee High School from 10 a.m. to 2 p.m. Saturdays for fourth through 12th grade students to come in for extra time to complete schoolwork. An adult from the school system will be present.

“Parents can send their students to Saturday school just to get their work done,” Walters said.

In the future, the district may extend the Saturday school opportunity to kindergarten through third grades.

The first positive student COVID-19 case in the district was reported in September, Walters said.

A total of 10 positive student cases have been reported in the district since September.

The first staff COVID-19 case was reported in May, and a total of 15 positive staff cases have been reported in the district since May.

Currently, 20 students and 14 staff members are required to quarantine from school, Walters said.

The district began tracking positive cases in April, though some cases may have occurred early on and not been reported, she noted.

The district notifies close contacts regarding positive cases, but the whole school or district are not notified with each case.

Because students are separated in different sections of the schools and attend on different days, a school-wide notification is not necessary for each case, Walters explained. 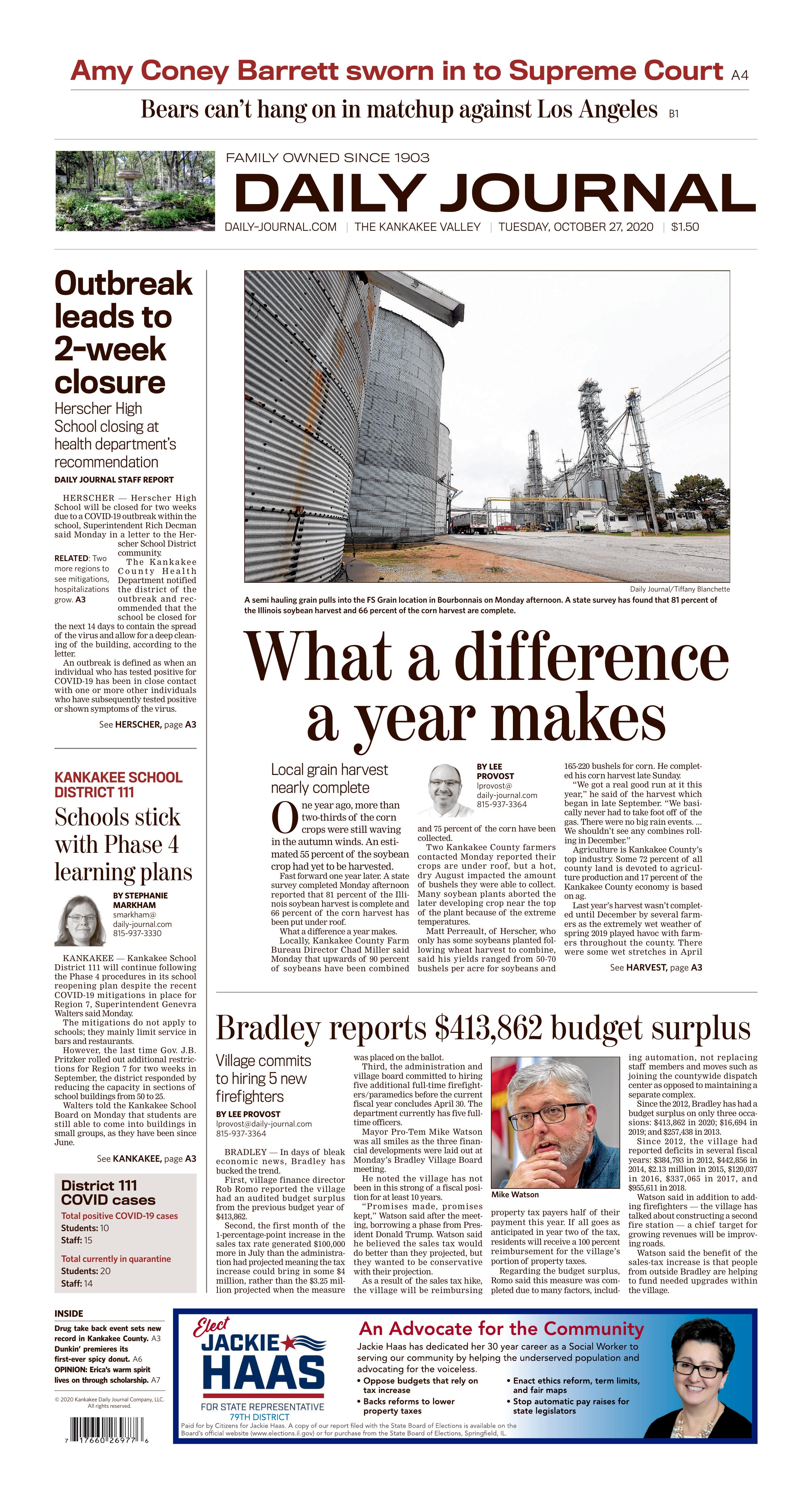