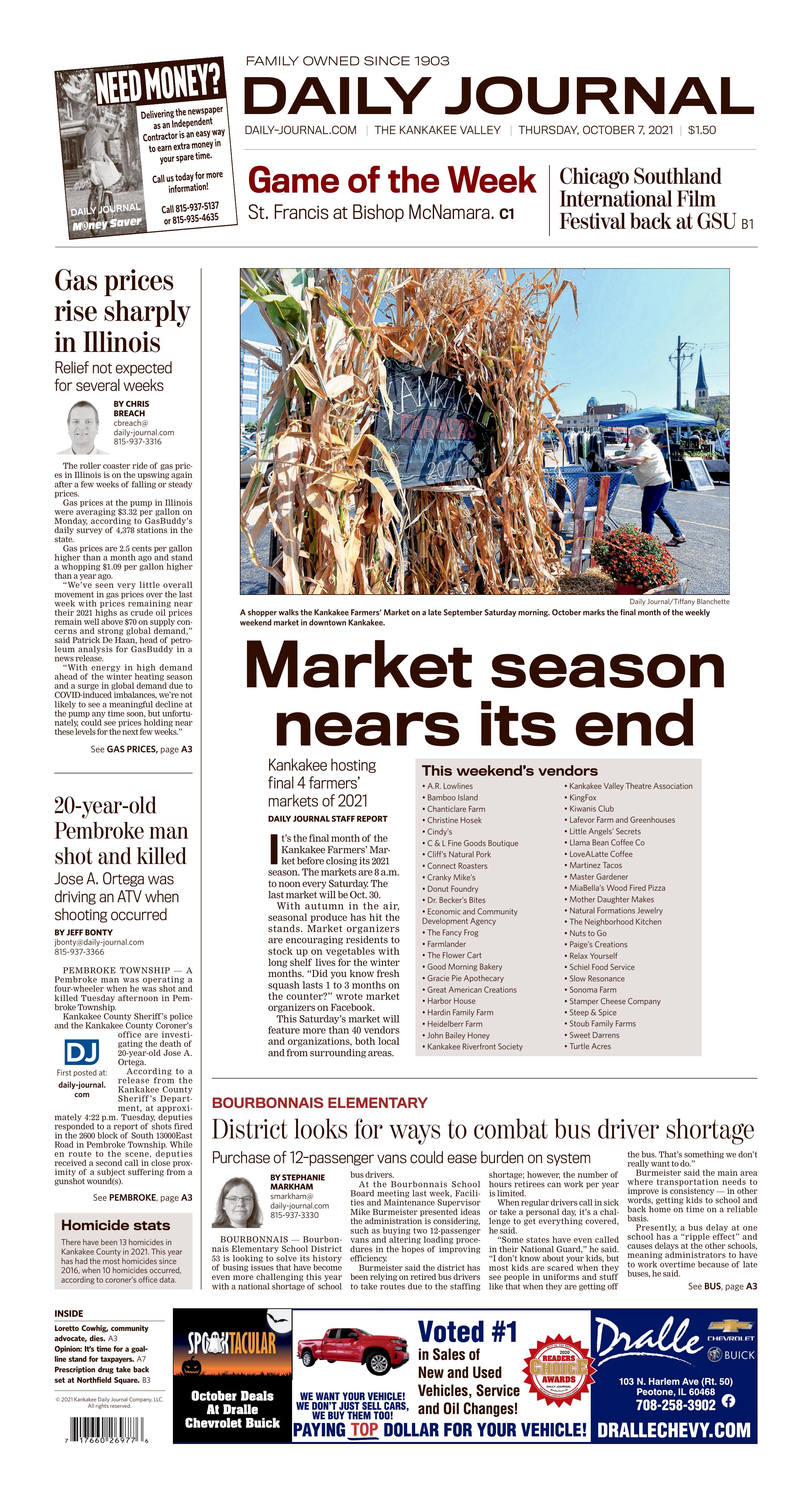 A shopper walks the Kankakee Farmers’ Market on a late September Saturday morning. October marks the final month of the weekly weekend market in downtown Kankakee.

Attendees visit the vendors at the Kankakee Farmers’ Market in late September. October marks the final month of the weekly Saturday market in downtown Kankakee.

It’s the final month of the Kankakee Farmers’ Market before closing its 2021 season. The markets are 8 a.m. to noon every Saturday. The last market will be Oct. 30.

With autumn in the air, seasonal produce has hit the stands. Market organizers are encouraging residents to stock up on vegetables with long shelf lives for the winter months. “Did you know fresh squash lasts 1 to 3 months on the counter?” wrote market organizers on Facebook.

This Saturday’s market will feature more than 40 vendors and organizations, both local and from surrounding areas.

As the Bourbonnais Elementary School District continues to feel the effects of a national school bus driver shortage, it has been relying on retired bus drivers to take routes.

BOURBONNAIS — Bourbonnais Elementary School District 53 is looking to solve its history of busing issues that have become even more challenging this year with a national shortage of school bus drivers.

At the Bourbonnais School Board meeting last week, Facilities and Maintenance Supervisor Mike Burmeister presented ideas the administration is considering, such as buying two 12-passenger vans and altering loading procedures in the hopes of improving efficiency.

Burmeister said the district has been relying on retired bus drivers to take routes due to the staffing shortage; however, the number of hours retirees can work per year is limited.

When regular drivers call in sick or take a personal day, it’s a challenge to get everything covered, he said.

“Some states have even called in their National Guard,” he said. “I don’t know about your kids, but most kids are scared when they see people in uniforms and stuff like that when they are getting off the bus. That’s something we don’t really want to do.”

Burmeister said the main area where transportation needs to improve is consistency — in other words, getting kids to school and back home on time on a reliable basis.

Presently, a bus delay at one school has a “ripple effect” and causes delays at the other schools, meaning administrators to have to work overtime because of late buses, he said.

He proposed that colored letters could be placed in bus windows to help younger students identify their buses, and that buses should be parked in the same spot every day so students know exactly where to go.

“There’s a lot of confusion when younger students are out there, they don’t know what bus to get on, they get on the wrong bus; to get people off the bus and reload, it takes time,” Burmeister said.

Additionally, teachers and administrators would take a roll call before the bus arrives so time is not wasted looking for a child that is absent or gone home early, he said.

“Lining up, being released, loading buses needs to be a seamless process because these times are crucial,” he said. “We cannot hold buses for one child, and we cannot return back to school to pick up that one kid that was missing on the bus, because again, now we’ve just made everybody else later.”

Another proposed change would be that buses pick students up by “zones” according to what school they attend; therefore, buses would not be going back and forth to multiple schools, and kids would be riding only with other students from their same school.

To speed up loading procedures, students would be lined up and dismissed by bus, instead of by classroom, he added.

They would also be released from whichever door is closest to where their bus is parked, rather than having all kids rushing out the main door, he said.

Any change or delay of more than 15 minutes would then be communicated via email or text message.

Over the summer, the board approved the purchase of GPS software that would let parents track their child’s bus via an app. That software was being installed last week, Burmeister said.

To make everything work, the district will need to have alternative transportation, he said.

“We can’t make any more bus drivers; we’re tapped out,” he said. “We have to make the routes according to the bus drivers we have.”

The proposal is to buy two 12-passenger vans. Drivers would only need a bus driver permit to drive these, rather than a commercial driver’s license.

The vans would also be used to pick up individual students that have missed the bus, rather than making everyone on the bus late to wait for one child, he said. Special routes such as field trips, sports trips and busing to alternative schools would also be uses for the vans.

Superintendent Adam Ehrman noted that the district is not looking to reduce its number of bus drivers.

“We need bus drivers,” he said. “We’re trying to reduce down the pressures of how many drivers per day that we actually need. It would be a good problem to have too many bus drivers.”

Ehrman also noted that the changes were being presented as a proposal only and that they would take time to be put into action, as many variables need to be considered before implementing such a significant overhaul.

Board members also said that they wanted to take time to explore questions they have about the proposed changes and possibly discuss the matter in committee before giving their approval.

A worker delivers gas to the Circle K on Route 50 in Bradley as rising gas prices are displayed in the background. READ MORE.

The roller coaster ride of gas prices in Illinois is on the upswing again after a few weeks of falling or steady prices.

Gas prices at the pump in Illinois were averaging $3.32 per gallon on Monday, according to GasBuddy’s daily survey of 4,378 stations in the state.

“With energy in high demand ahead of the winter heating season and a surge in global demand due to COVID-induced imbalances, we’re not likely to see a meaningful decline at the pump any time soon, but unfortunately, could see prices holding near these levels for the next few weeks.”

According to GasBuddy price reports, the cheapest station in Illinois was priced at $2.87 per gallon on Monday while the most expensive was $3.99 per gallon.

The average gas prices in Illinois from the week of Oct. 4 in the past 10 years:

PEMBROKE TOWNSHIP — A Pembroke man was operating a four-wheeler when he was shot and killed Tuesday afternoon in Pembroke Township.

According to a release from the Kankakee County Sheriff’s Department, at approximately 4:22 p.m. Tuesday, deputies responded to a report of shots fired in the 2600 block of South 13000East Road in Pembroke Township. While en route to the scene, deputies received a second call in close proximity of a subject suffering from a gunshot wound(s).

Upon arrival, deputies located the shooting victim, Ortega, as well as a crime scene nearby. Ortega was pronounced dead at the scene at 5:05 p.m., Coroner Bob Gessner said. An autopsy is scheduled for today.

Ortega was operating a four-wheeler when he was shot, according to emergency radio. Numerous shell casings were recovered.

Sheriff’s detectives continue to investigate the incident and are encouraging anyone with any information to contact them at 815-802-7150. Anyone wishing to remain anonymous can do so by calling CrimeStoppers at 815-932-7463.

There have been 13 homicides in Kankakee County in 2021. This year has had the most homicides in recent years.

Ten homicides occurred in 2016, which was the year that previously had the highest number of homicides in recent years, according to coroner's office data.