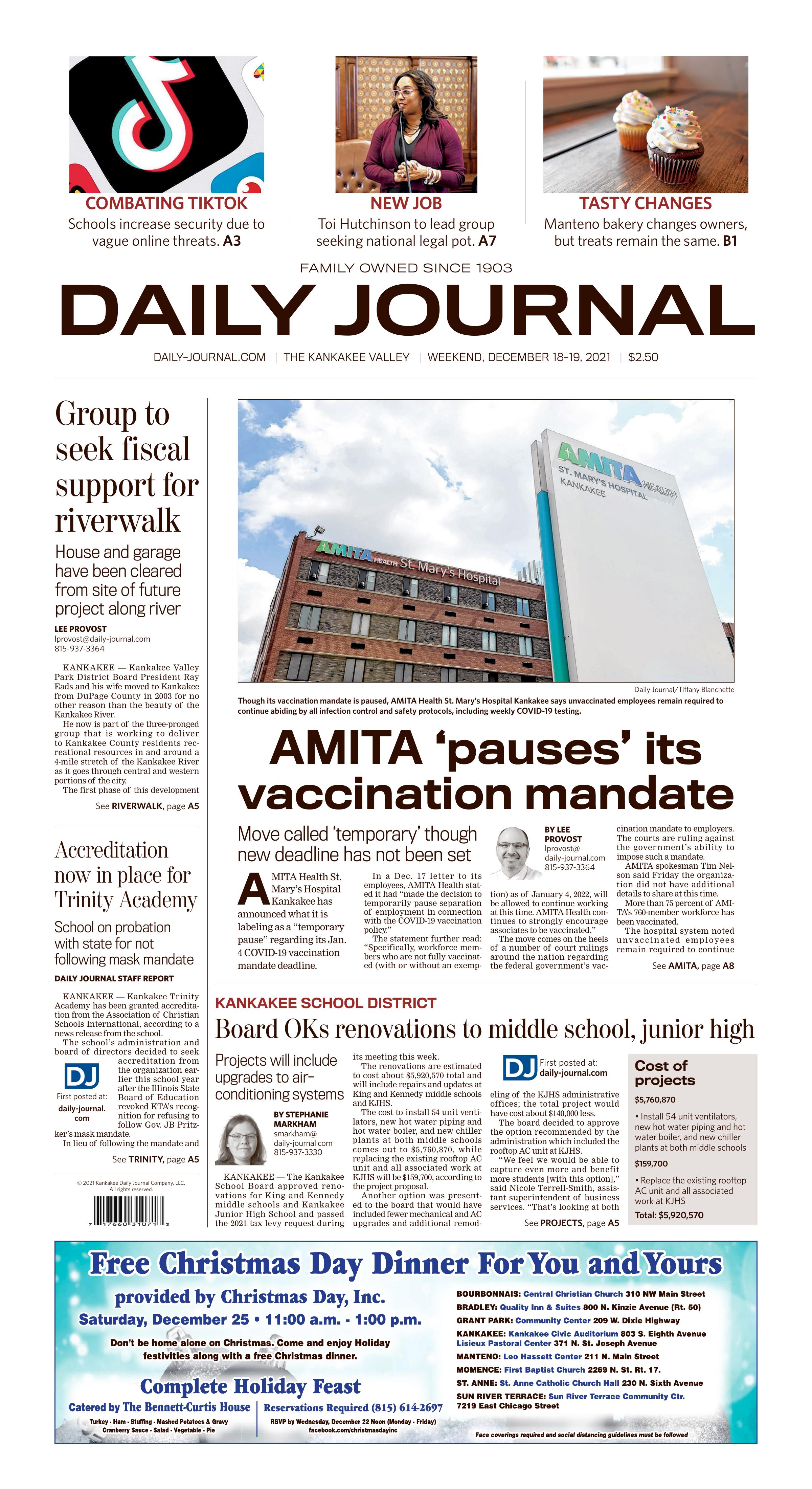 KANKAKEE — The Kankakee School Board approved renovations for King and Kennedy middle schools and Kankakee Junior High School and passed the 2021 tax levy request during its meeting this week.

The renovations are estimated to cost about $5,920,570 total and will include repairs and updates at King and Kennedy middle schools and KJHS.

The cost to install 54 unit ventilators, new hot water piping and hot water boiler, and new chiller plants at both middle schools comes out to $5,760,870, while replacing the existing rooftop AC unit and all associated work at KJHS will be $159,700, according to the project proposal.

Another option was presented to the board that would have included fewer mechanical and AC upgrades and additional remodeling of the KJHS administrative offices; the total project would have cost about $140,000 less.

The board decided to approve the option recommended by the administration which included the rooftop AC unit at KJHS.

“We feel we would be able to capture even more and benefit more students [with this option],” said Nicole Terrell-Smith, assistant superintendent of business services. “That’s looking at both Kennedy and King mechanicals, chillers, as well as dealing with the rooftop here [at KJHS], so we’re impacting a larger number of students. That budget is at $5.9 million.”

The purchase was approved unanimously, aside from one abstention from board member Christopher Bohlen.

Smith also updated the board on other construction projects in the district.

She said the third and final phase of Kankakee High School construction is nearing completion.

“Now, we are just waiting on the final pieces of furniture, which are anticipated to be delivered next week,” Smith said. “Once those are put together, we will be ready to fully open that hub.”

The final hub is slated to be a remote/hybrid learning hub.

Smith also said the remodeling work on KJHS began Monday, including some demolition work. A key feature of that project will include an expanded and renovated cafeteria.

Smith also summarized the final 2021 tax levy request before the board voted to approve it.

The total levy being submitted for is $18 million, including $11.36 million for the education fund, $2.625 million for operations and maintenance, and $2.1 million for transportation.

The board also approved a supplemental property tax levy to pay off principal and interest on outstanding bonds.

Also during Monday’s meeting, Superintendent Genevra Walters updated the board on the district’s current COVID-19 numbers.

As of Monday, a total of 62 adults and 149 students had tested positive for COVID-19 since school started in August, according to Walter’s report.

Currently, one adult and 782 students throughout the district are in quarantine, Walters said.

Shameka Fountain, assistant superintendent for human resources, updated the board on the district’s health clinics during the personnel report.

Fountain said the district’s health clinics at Kankakee High School and Kankakee Junior High School have provided more than 1,389 tests for staff that submit for weekly COVID-19 testing, and they have been able to service 404 students with COVID-19 tests.

A perspective of the proposed East Riverwalk project as presented during a virtual public open house in March.

KANKAKEE — Kankakee Valley Park District Board President Ray Eads and his wife moved to Kankakee from DuPage County in 2003 for no other reason than the beauty of the Kankakee River.

He now is part of the three-pronged group that is working to deliver to Kankakee County residents recreational resources in and around a 4-mile stretch of the Kankakee River as it goes through central and western portions of the city.

The first phase of this development is the East Riverwalk, a 1-acre park set to be developed at the southeast corner of East River Street and South Schuyler Avenue in Kankakee. The project is expected to break ground by no later than fall 2023.

If the project does not begin before the end of 2023, current grant funds would need to be returned.

The groups behind this project are the City of Kankakee, the Kankakee Valley Park District and the Kankakee Riverfront Society, which is a volunteer organization comprised of about 25 area residents.

The $2.5 million to $3 million East Riverwalk project will be a key point of the entire riverwalk project, officials noted during a Friday morning program at the site, not just because it will be the first major development, but it can show the community what is possible along the river banks.

Eads admitted Friday he was not entirely sold on the project at first, but once he took in the master plan in its entirety, he has been “hook, line and sinker” ever since.

The project, brought to the city by then-Mayor Chasity Wells-Armstrong, has been in discussion and development stages since 2017.

Eads said there certainly will be those who he called “Debbie Downers and Negative Nancys” regarding the feasibility of such a large project and the community’s ability to support such an endeavor.

“We just have to stay focused,” he said.

Eads described this project as something similar to the baseball diamond construction in the Kevin Costner movie “Field of Dreams.”

“This is truly, ‘If we build it, they will come,’” he said regarding not only community interest but from those outside the community as well. “To Kankakee, this is their Christmas present. The future riverwalk.”

The site has already gone through the first stage of its transformation as a long-standing house and garage on the western portion of the property has been demolished and the site cleared.

However, before any earthmoving equipment or construction crews make their appearance at the site, there is the matter of raising money. A significant amount of money.

Kankakee Mayor Chris Curtis noted $500,000 of grant money already has been spent on clearing the site and developing plans, but the time has come to take the concept to the public for fiscal backing.

He said the fundraising effort is now just getting set to begin and the group has already received $10,000. He noted that is a long way from where it needs to be, but it is a start.

If Friday’s unveiling of the East Riverwalk concept is any indication, there appears to be growing community support. The event was attended by about 40 people.

Curtis also noted the riverfront society is seeking to have a full-time director hired within the next three months or so. The chief charge of the director will be raising money through grants, the community and the region’s business sector.

Curtis noted this project is not to be funded by Kankakee taxpayers.

Matt McBurnie, vice chairman of the riverfront society, said this portion of the project is simply the first step of many steps to be taken. He noted while many people talk of the Naperville riverwalk and its beauty, he stressed development took decades.

“We know this is Step One. If we can do this, we can do Step Two. I view this like a snowball going downhill and becoming larger. I think as people see what we are getting accomplished, more people will step forward and join us,” he said.

McBurnie noted the public is skeptical because of past announcements of projects that never materialized.

Barbi Brewer-Watson, Kankakee’s economic and community development executive director, noted Kankakee suffers from its own perspective of what it can and can’t be.

“If we don’t start, don’t try, it will never happen,” she said. “We just have to keep working together.”

Eads said there is no question the Kankakee River has served the area well. But, he noted, it can provide even more than just being its source of water.

“This is a magnificent resource, but it has not been used to its full potential,” he said. “I will do whatever I can to support this project. If you build it, people will come. I’m super excited.”

A key property for Kankakee's continuing effort to redevelop its riverfront was taken when its acquired the former location of the Landing bar and restaurant for the bargain basement price of $807.

The Currents of Kankakee, the organization charged with steering the development in and along the 4-mile stretch of the Kankakee River in Kankakee, will need a front person to guide this plan.

Residents got their first look at the more finalized plans for Kankakee’s riverwalk project.

KANKAKEE — Kankakee Trinity Academy has been granted accreditation from the Association of Christian Schools International, according to a news release from the school.

The school’s administration and board of directors decided to seek accreditation from the organization earlier this school year after the Illinois State Board of Education revoked KTA’s recognition for refusing to follow Gov. JB Pritzker’s mask mandate.

In lieu of following the mandate and providing evidence to the state board to regain recognition, the school pursued the ACSI accreditation.

As part of the accreditation process, the ACSI conducted one site visit at the school, according to the release.

“I am thankful to God for blessing us during this difficult time,” said Pastor Brad Prairie, the school’s principal, in the release. “We couldn’t be happier to be accredited with ACSI. We are excited about the new chapter and growth that God has planned for us.”

According to the ACSI website, the purpose of its certification is “to strengthen Christian schools by credentialing educators who meet established professional and Biblical requirements.”

Accreditation is granted to KTA until the first renewal visits during the spring of 2023, according to the release.

ACSI accreditation establishes a framework for professional growth over time, similar to the framework of school improvement within the public school system, the release states.

ISBE recently returned the KTA’s status and again asked the school to follow the mask mandate, to which it declined. KTA’s most recent status with the state is “on probation.”

KTA is a pre-K through 12th-grade school and had previously been recognized with the state since shortly after it was founded in 1981.

Kankakee Trinity Academy recently sifted through more status changes with the Illinois State Board of Education before landing back to “on probation” as of Nov. 19.

New bill would give ISBE authority to punish schools
By Greg Bishop | The Center Square
Aug 31, 2021

Nearly 60 schools have been put on probation or listed as not recognized by the Illinois State Board of Education for failing to follow a statewide mask mandate for schools.