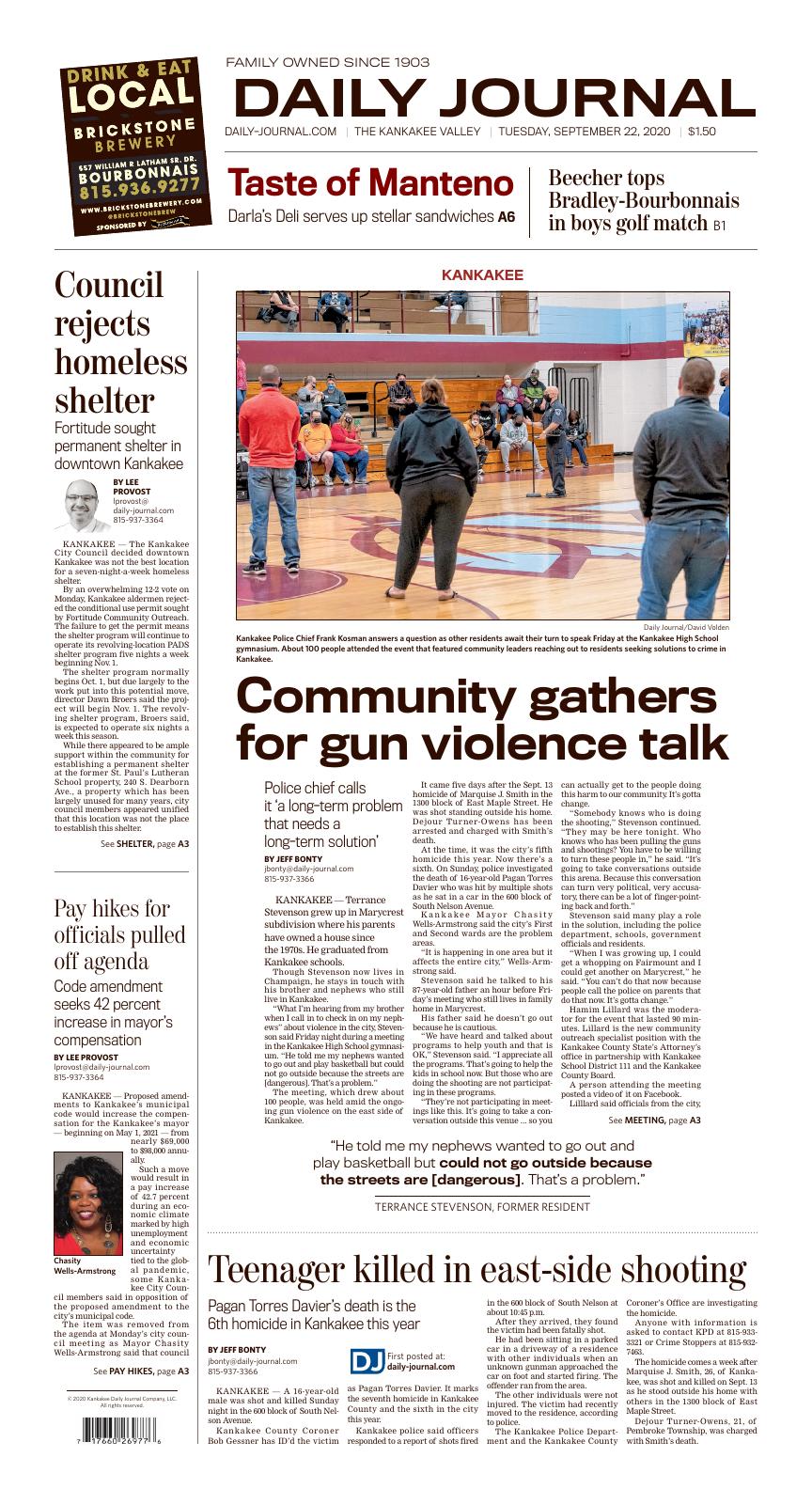 Kankakee Police Chief Frank Kosman answers a question as other residents await their turn to speak Friday at the Kankakee High School gymnasium. About 100 people attended the event that featured community leaders reaching out to residents seeking solutions to crime in Kankakee.

KANKAKEE — Terrance Stevenson grew up in Marycrest subdivision where his parents have owned a house since the 1970s. He graduated from Kankakee schools.

Though Stevenson now lives in Champaign, he stays in touch with his brother and nephews who still live in Kankakee.

“What I’m hearing from my brother when I call in to check in on my nephews” about violence in the city, Stevenson said Friday night during a meeting in the Kankakee High School gymnasium. “He told me my nephews wanted to go out and play basketball but could not go outside because the streets are [dangerous]. That’s a problem.”

The meeting, which drew about 100 people, was held amid the ongoing gun violence on the east side of Kankakee.

It came five days after the Sept. 13 homicide of Marquise J. Smith in the 1300 block of East Maple Street. He was shot standing outside his home. Dejour Turner-Owens has been arrested and charged with Smith’s death.

At the time, it was the city’s fifth homicide this year. Now there’s a sixth. On Sunday, police investigated the death of 16-year-old Pagan Torres Davier who was hit by multiple shots as he sat in a car in the 600 block of South Nelson Avenue.

“It is happening in one area but it affects the entire city,” Wells-Armstrong said.

Stevenson said he talked to his 87-year-old father an hour before Friday’s meeting who still lives in family home in Marycrest.

His father said he doesn’t go out because he is cautious.

“We have heard and talked about programs to help youth and that is OK,” Stevenson said. “I appreciate all the programs. That’s going to help the kids in school now. But those who are doing the shooting are not participating in these programs.

“They’re not participating in meetings like this. It’s going to take a conversation outside this venue ... so you can actually get to the people doing this harm to our community. It’s gotta change.

“Somebody knows who is doing the shooting,” Stevenson continued. “They may be here tonight. Who knows who has been pulling the guns and shootings? You have to be willing to turn these people in,” he said. “It’s going to take conversations outside this arena. Because this conversation can turn very political, very accusatory, there can be a lot of finger-pointing back and forth.”

Stevenson said many play a role in the solution, including the police department, schools, government officials and residents.

“When I was growing up, I could get a whopping on Fairmount and I could get another on Marycrest,” he said. “You can’t do that now because people call the police on parents that do that now. It’s gotta change.”

A person attending the meeting posted a video of it on Facebook.

Lilllard said officials from the city, Kankakee County, Kankakee school district and Kankakee Valley Park District were there to listen.

“We want to hear what solutions you have to help end this,” he said.

Steven Hunter, a former alderman who now is on the Kankakee County Board, said more neighborhood associations need to be organized. Such organizations are helpful to the residents as well as police, he said.

Kankakee police have investigated 30 reports of shots fired so far this year. During Friday’s meeting, Kankakee Police Chief Frank Kosman said that compares to 29 during the same time span in 2019 and 27 in 2018.

Within the next two months, the city will have a system in place that can detect shots being fired within 15 meters of where it occurred.

As of Aug. 1, Kosman said 13 guns have been seized and officers have made 10 weapons arrests.

Kosman said residents need to lock their vehicles. They have had five thefts of weapons that were left in unlocked vehicles.

“This is a Kankakee problem,” he said. “We need to work together to bring the city back to greatness.”

"He told me my nephews wanted to go out and play basketball but could not go outside because the streets are [dangerous]. That’s a problem.”

KANKAKEE — A 16-year-old male was shot and killed Sunday night in the 600 block of South Nelson Avenue.

Kankakee County Coroner Bob Gessner has ID’d the victim as Pagan Torres Davier. It marks the seventh homicide in Kankakee County and the sixth in the city this year.

Kankakee police said officers responded to a report of shots fired in the 600 block of South Nelson at about 10:45 p.m.

After they arrived, they found the victim had been fatally shot.

He had been sitting in a parked car in a driveway of a residence with other individuals when an unknown gunman approached the car on foot and started firing. The offender ran from the area.

The other individuals were not injured. The victim had recently moved to the residence, according to police.

The Kankakee Police Department and the Kankakee County Coroner’s Office are investigating the homicide.

The homicide comes a week after Marquise J. Smith, 26, of Kankakee, was shot and killed on Sept. 13 as he stood outside his home with others in the 1300 block of East Maple Street.

Dejour Turner-Owens, 21, of Pembroke Township, was charged with Smith’s death.

KANKAKEE — The Kankakee City Council decided downtown Kankakee was not the best location for a seven-night-a-week homeless shelter.

By an overwhelming 12-2 vote on Monday, Kankakee aldermen rejected the conditional use permit sought by Fortitude Community Outreach. The failure to get the permit means the shelter program will continue to operate its revolving-location PADS shelter program five nights a week beginning Nov. 1.

The shelter program normally begins Oct. 1, but due largely to the work put into this potential move, director Dawn Broers said the project will begin Nov. 1. The revolving shelter program, Broers said, is expected to operate six nights a week this season.

While there appeared to be ample support within the community for establishing a permanent shelter at the former St. Paul’s Lutheran School property, 240 S. Dearborn Ave., a property which has been largely unused for many years, city council members appeared unified that this location was not the place to establish this shelter.

Broers was disappointed after the meeting, but said she had braced herself for this outcome.

She said the program will begin preparing for its rotating shelter program today.

“We are resilient,” she said.

The shelter would have been in operation from 6:30 p.m. until 7 a.m. daily if it had been approved. It would have housed no more than 18-20 people on any given night, Fortitude officials had stated.

Most council members spoke in favor of the work completed by Fortitude and its volunteer staff, but said downtown Kankakee was simply not the place to locate a shelter.

The only council members who voted in favor of the permit were Tyler Tall Sr., D-5, and Jim Faford, R-4. Faford attempted to put some stipulations on the project in terms of strict record-keeping as to who was staying at the shelter each night and gaining detailed police data for crimes committed in the downtown area.

That amendment was also rejected.

Prior to the vote, Mayor Chasity Wells-Armstrong read nearly two dozen letters into the record during the public comment portion of the meeting. Due to COVID-19, Monday’s meeting was held remotely, meaning it was conducted through video conferencing, and comments were required to be submitted in advance.

One council member, Ald. Fred Tetter, D-7, suggested the program should be placed in a residential area. He said there are vacant homes which could be used.

Ald. Stacy Gall, D-2, who represents the area where the shelter had been targeted, noted she could not support the project in the downtown.

“We are finally seeing our downtown grow. We’ve come from a low place. We have a way to go before the downtown can take something like this on,” she said.

Gall’s 2nd Ward seat mate, Ald. Mike O’Brien, agreed. He said part of a council members’ job is to project what may be best for long-term growth. He stated he could not support this site as a shelter.

“We are the experts in homelessness. We presented to them what was a perfect situation and they are pretending to be the experts. An abandoned home in the middle of a neighborhood is not the answer,” she said.

KANKAKEE — Proposed amendments to Kankakee’s municipal code would increase the compensation for the Kankakee’s mayor — beginning on May 1, 2021 — from nearly $69,000 to $98,000 annually.

Such a move would result in a pay increase of 42.7 percent during an economic climate marked by high unemployment and economic uncertainty tied to the global pandemic, some Kankakee City Council members said in opposition of the proposed amendment to the city’s municipal code.

The item was removed from the agenda at Monday’s city council meeting as Mayor Chasity Wells-Armstrong said that council members sought to further discuss the matter.

The amendment — included in the council’s meeting documents — would raise the mayor’s current mayoral salary of $62,669 to $80,000. It would have also increased the mayor’s annual pay for being the liquor control officer from $6,000 to $12,000 and create the new position of cannabis control commissioner, at $6,000 annually.

The $98,000 total does not include the $8,400 annual meeting pay the mayor receives to be chairperson of the Kankakee Regional Wastewater Utility board of directors.

Council members’ salaries — which range from $10,7500 to $11,813 — depending on when they joined the council and whether annual cost-of-living increases were accepted, would be raised to $15,000.

The mayoral salary was increased to $50,000 in 2008 and with yearly 1.5 percent cost-of-living increases, the current yearly salary is just under $63,000. That figure is strictly the mayoral salary, not other duties such as liquor commissioner.

At Monday’s meeting, not one council member spoke in favor of an increase in their compensation.

In fact, several spoke out against the move.

Ald. David Crawford, R-3, said he would favor a 25 percent pay reduction for council members. “Now is not the time to be giving out raises,” he said.

Cherry Malone Marshall, D-1, agreed and noted she is deeply against any raises. Fred Tetter, D-7, said given all that is going on currently, the council should be thinking of trimming expenses or at the very least, holding expenses to where they are.

Wells-Armstrong said the pay increases are about “equity and fairness” for what people do. She noted in her role as mayor, she oversees a workforce of nearly 300. She also noted most communities have either city administrators or city managers which basically operate their communities on a day-to-day basis.

In Kankakee, she noted, there is no such position and the responsibilities of the office continue to grow. She noted when the mayor’s pay was raised in 2008, the Kankakee mayor did not have to deal with legalized video gaming, nor legalized cannabis. She noted there was no such thing as a website or social media.

She noted the proposal is about paying people what she labeled a “living wage.”

After the council meeting, Ald. Chris Curtis, R-6, who is running for mayor in the April 2021 municipal election, posted on Facebook that at a time when small businesses, restaurants and other organizations are struggling to stay afloat, it is “unconscionable” to be voting for any raise, let alone substantial raises for elected officials.

He said the downturn in the economy will only add to the difficulties of crafting the next budget in mid 2021.

“I am sure this [potential pay increase] will cause significant outrage among the citizens of Kankakee which would be warranted.” 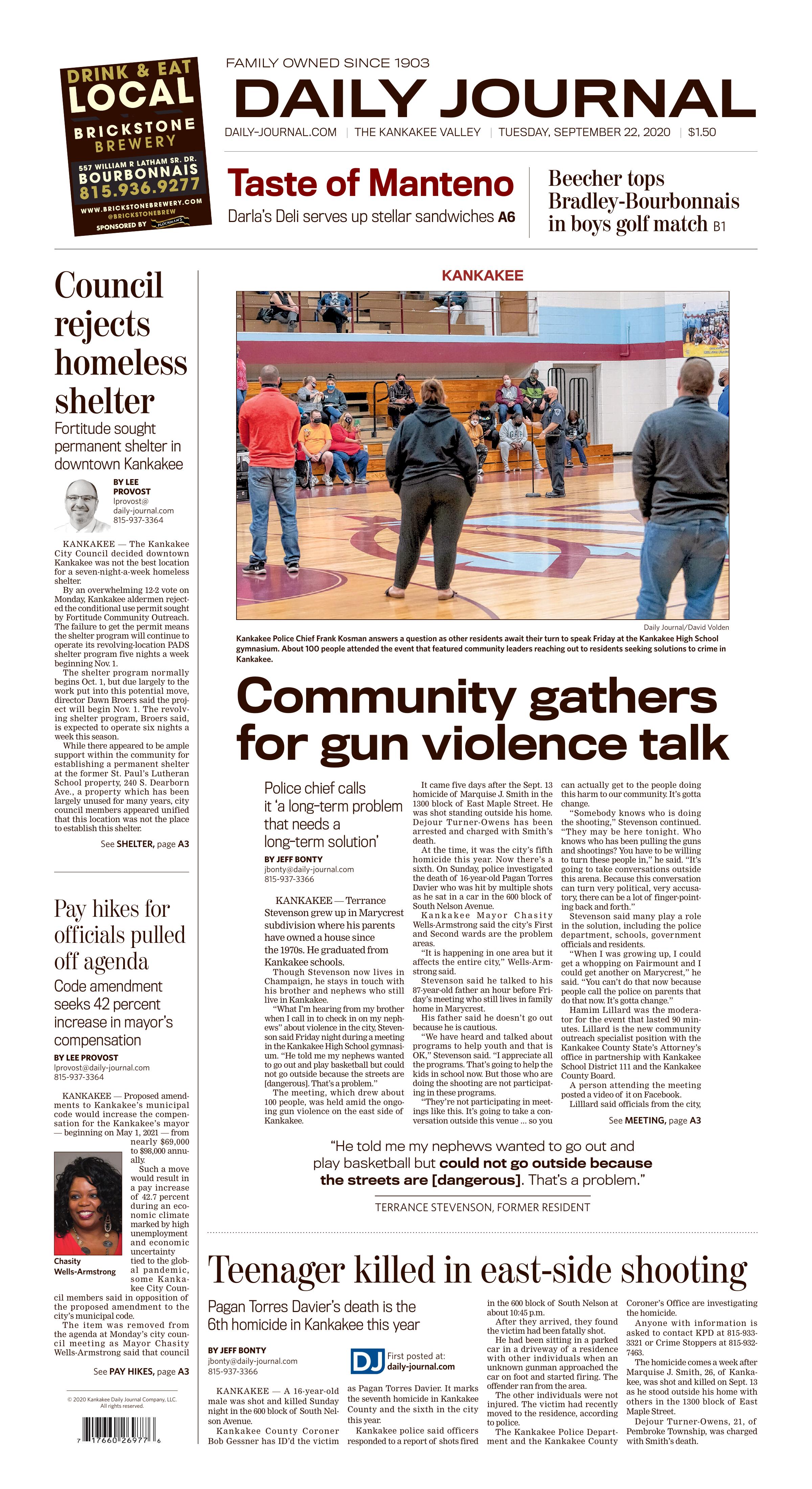