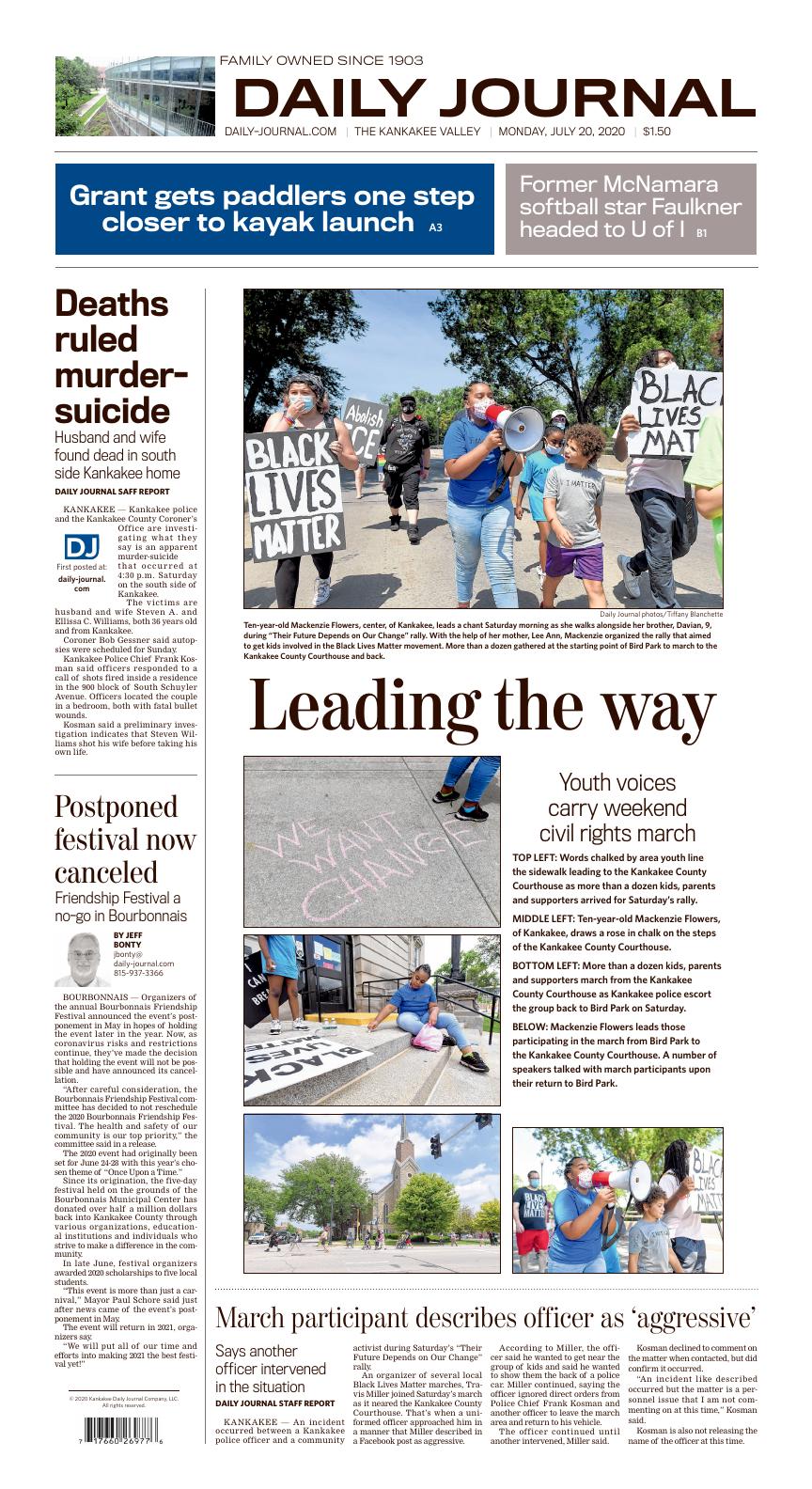 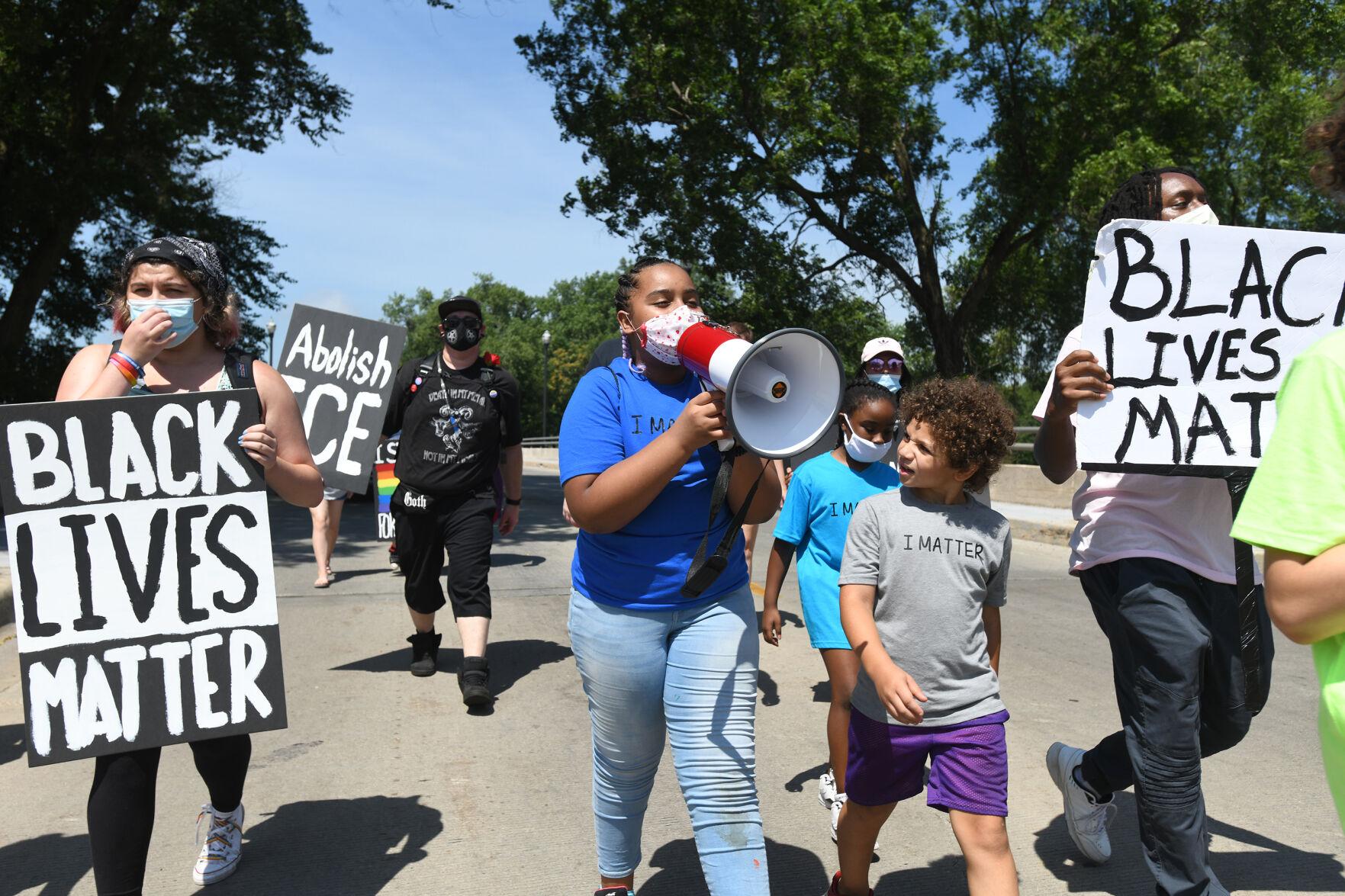 Ten-year-old Mackenzie Flowers, center, of Kankakee, leads a chant Saturday morning as she walks alongside her brother, Davian, 9, during “Their Future Depends on Our Change” rally. With the help of her mother, Lee Ann, Mackenzie organized the rally that aimed to get kids involved in the Black Lives Matter movement. More than a dozen gathered at the starting point of Bird Park to march to the Kankakee County Courthouse and back. 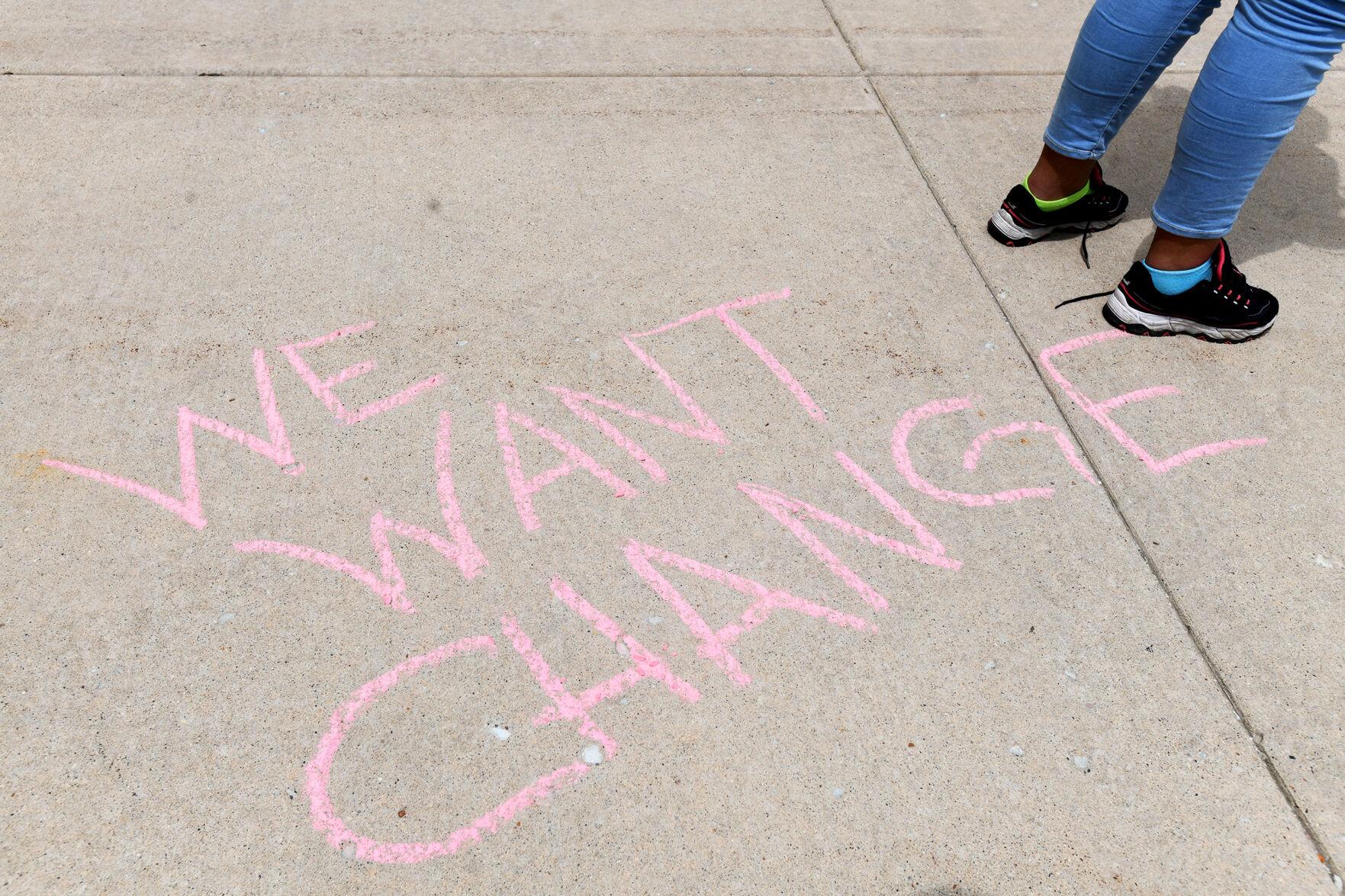 Words chalked by area youth line the sidewalk leading to the Kankakee County Courthouse as more than a dozen kids, parents and supporters arrived for Saturday’s rally. 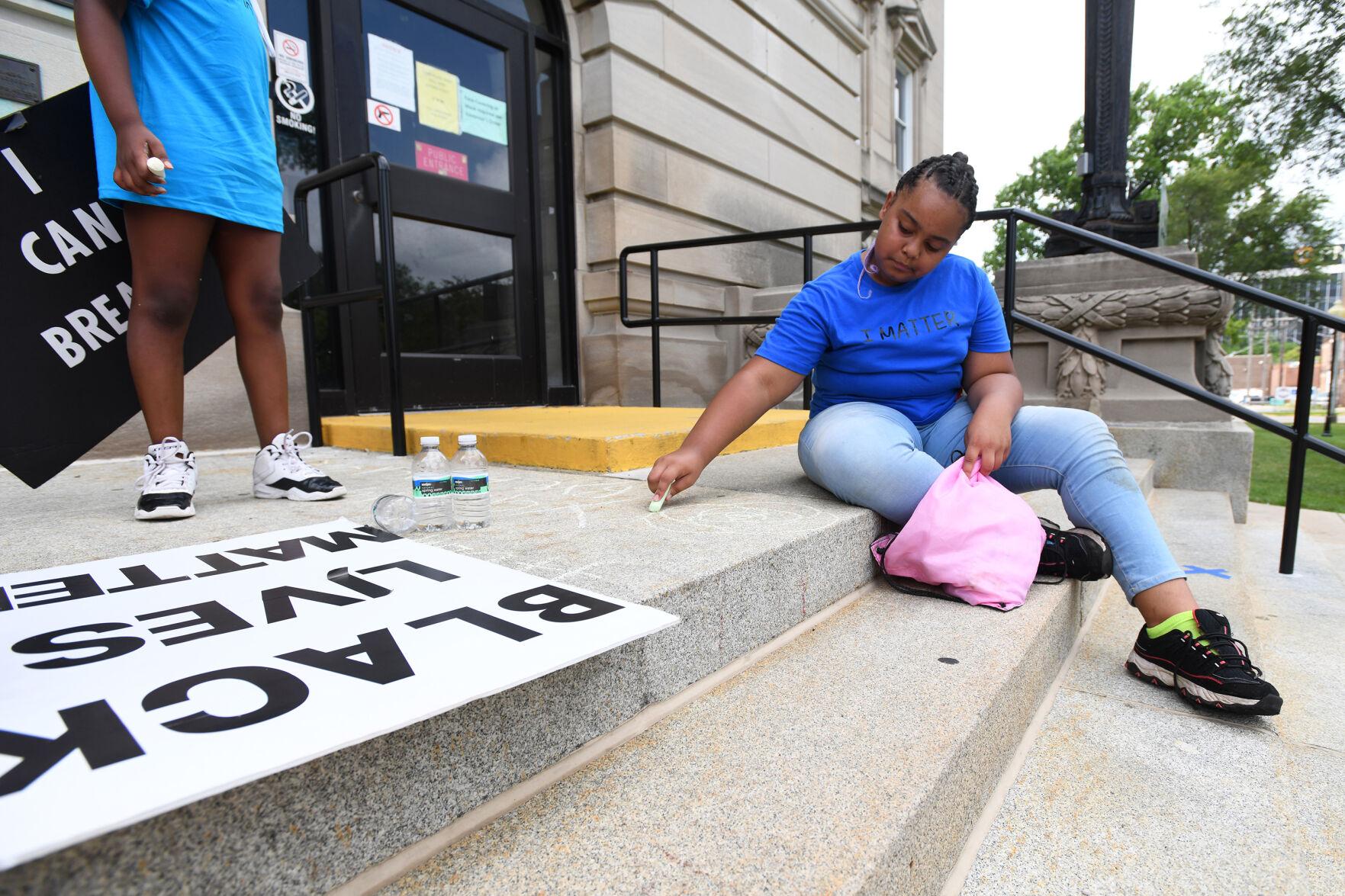 Ten-year-old Mackenzie Flowers, of Kankakee, draws a rose in chalk on the steps of the Kankakee County Courthouse.

More than a dozen kids, parents and supporters march from the Kankakee County Courthouse as Kankakee police escort the group back to Bird Park on Saturday.

KANKAKEE — An incident occurred between a Kankakee police officer and a community activist during Saturday’s “Their Future Depends on Our Change” rally.

An organizer of several local Black Lives Matter marches, Travis Miller joined Saturday’s march as it neared the Kankakee County Courthouse. That’s when a uniformed officer approached him in a manner that Miller described in a Facebook post as aggressive.

According to Miller, the officer said he wanted to get near the group of kids and said he wanted to show them the back of a police car. Miller continued, saying the officer ignored direct orders from Police Chief Frank Kosman and another officer to leave the march area and return to his vehicle.

The officer continued until another intervened, Miller said.

Kosman declined to comment on the matter when contacted, but did confirm it occurred.

“An incident like described occurred but the matter is a personnel issue that I am not commenting on at this time,” Kosman said.

Kosman is also not releasing the name of the officer at this time.

KANKAKEE — Kankakee police and the Kankakee County Coroner’s Office are investigating what they say is an apparent murder-suicide that occurred at 4:30 p.m. Saturday on the south side of Kankakee.

The victims are husband and wife Steven A. and Ellissa C. Williams, both 36 years old and from Kankakee.

Kankakee Police Chief Frank Kosman said officers responded to a call of shots fired inside a residence in the 900 block of South Schuyler Avenue. Officers located the couple in a bedroom, both with fatal bullet wounds.

Kosman said a preliminary investigation indicates that Steven Williams shot his wife before taking his own life.

BOURBONNAIS — Organizers of the annual Bourbonnais Friendship Festival announced the event’s postponement in May in hopes of holding the event later in the year. Now, as coronavirus risks and restrictions continue, they’ve made the decision that holding the event will not be possible and have announced its cancellation.

Since its origination, the five-day festival held on the grounds of the Bourbonnais Municipal Center has donated over half a million dollars back into Kankakee County through various organizations, educational institutions and individuals who strive to make a difference in the community.

“This event is more than just a carnival,” Mayor Paul Schore said just after news came of the event’s postponement in May.

The event will return in 2021, organizers say.

“We will put all of our time and efforts into making 2021 the best festival yet!” 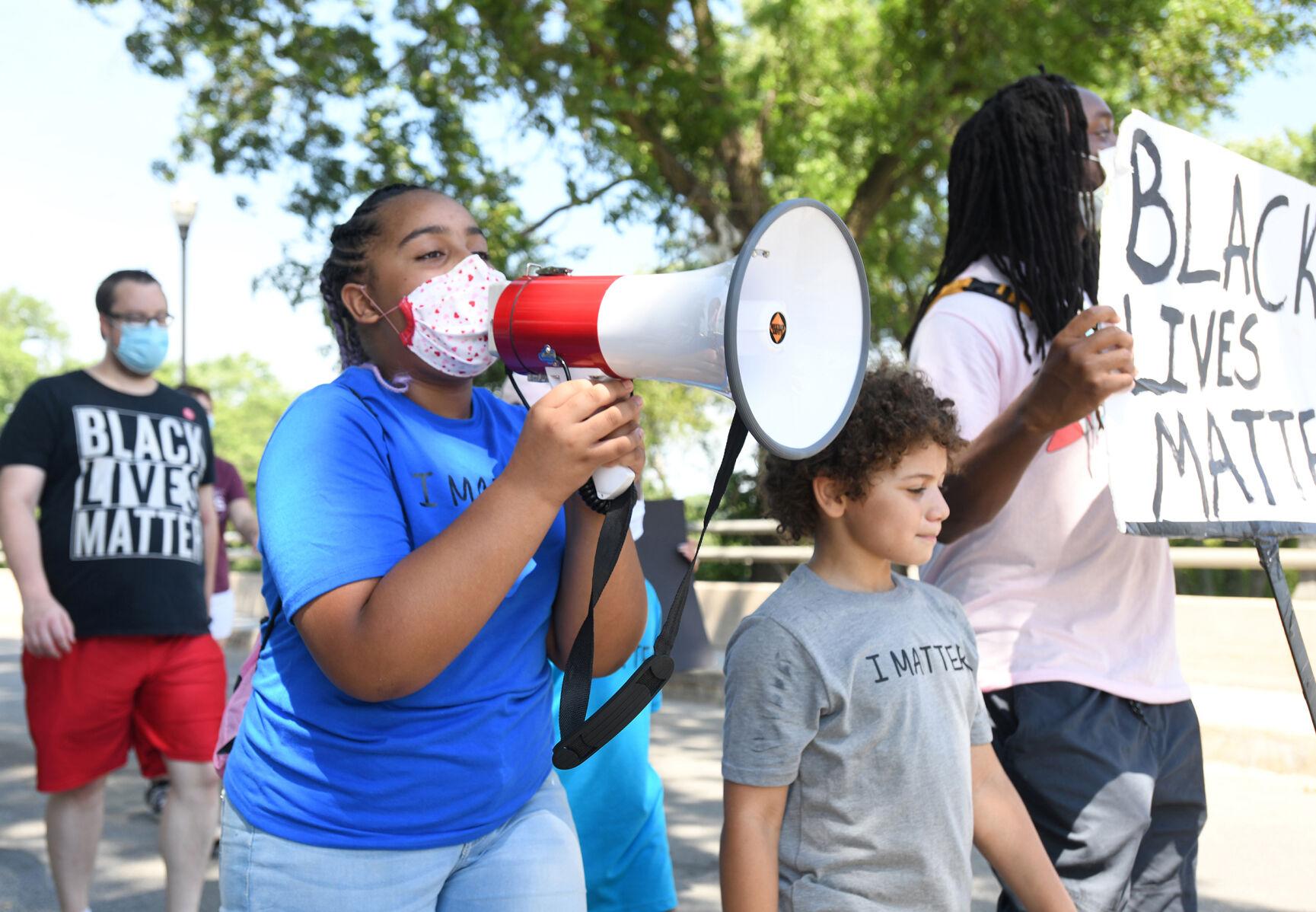 Ten-year-old Mackenzie Flowers, of Kankakee, leads a chant Saturday morning as her brother, Davian, 9, walks next to her during the Their Future Depends on Our Change rally, organized by Flowers for fellow kids wanting to participate in the Black Lives Matter movement. 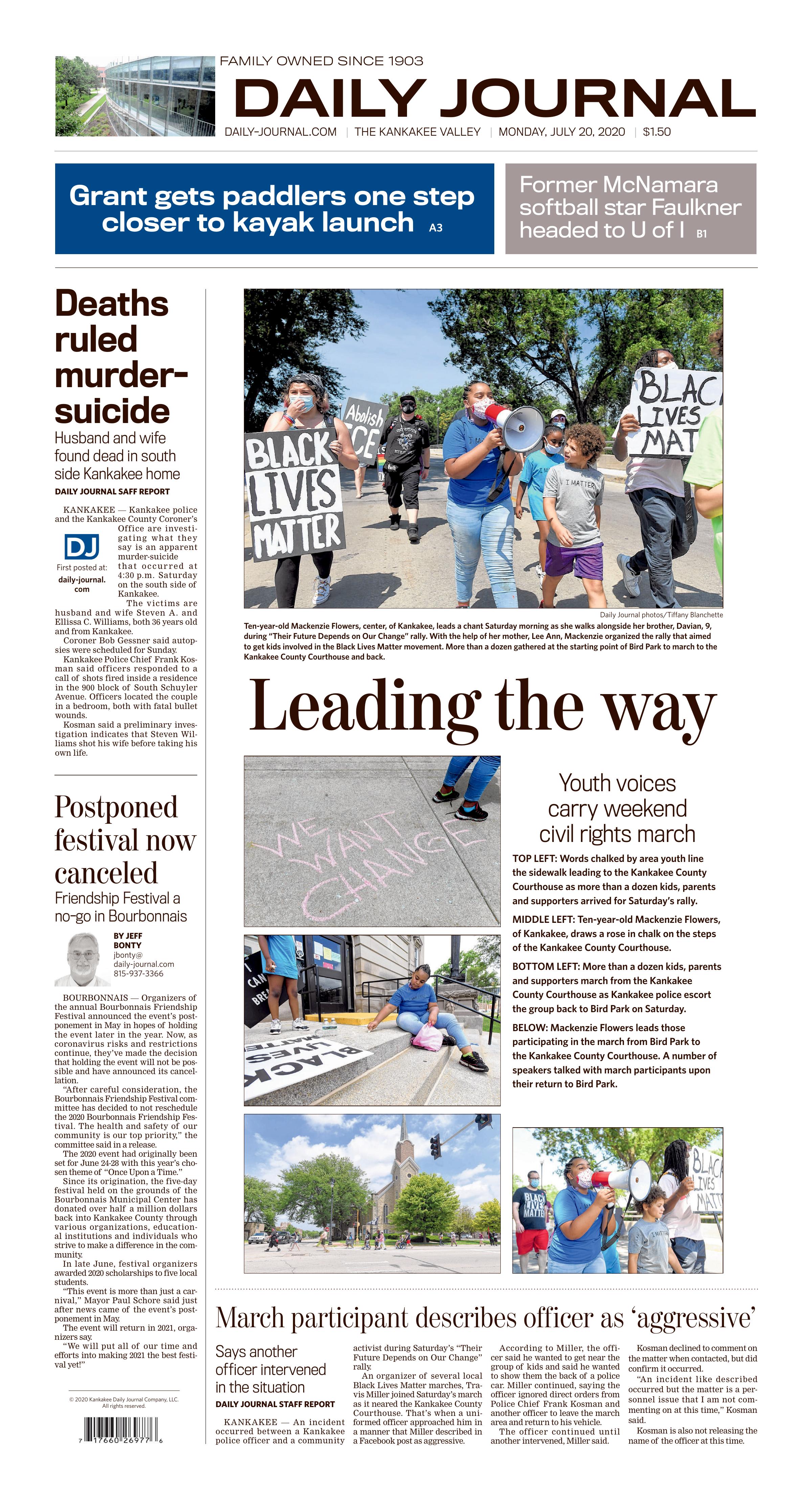