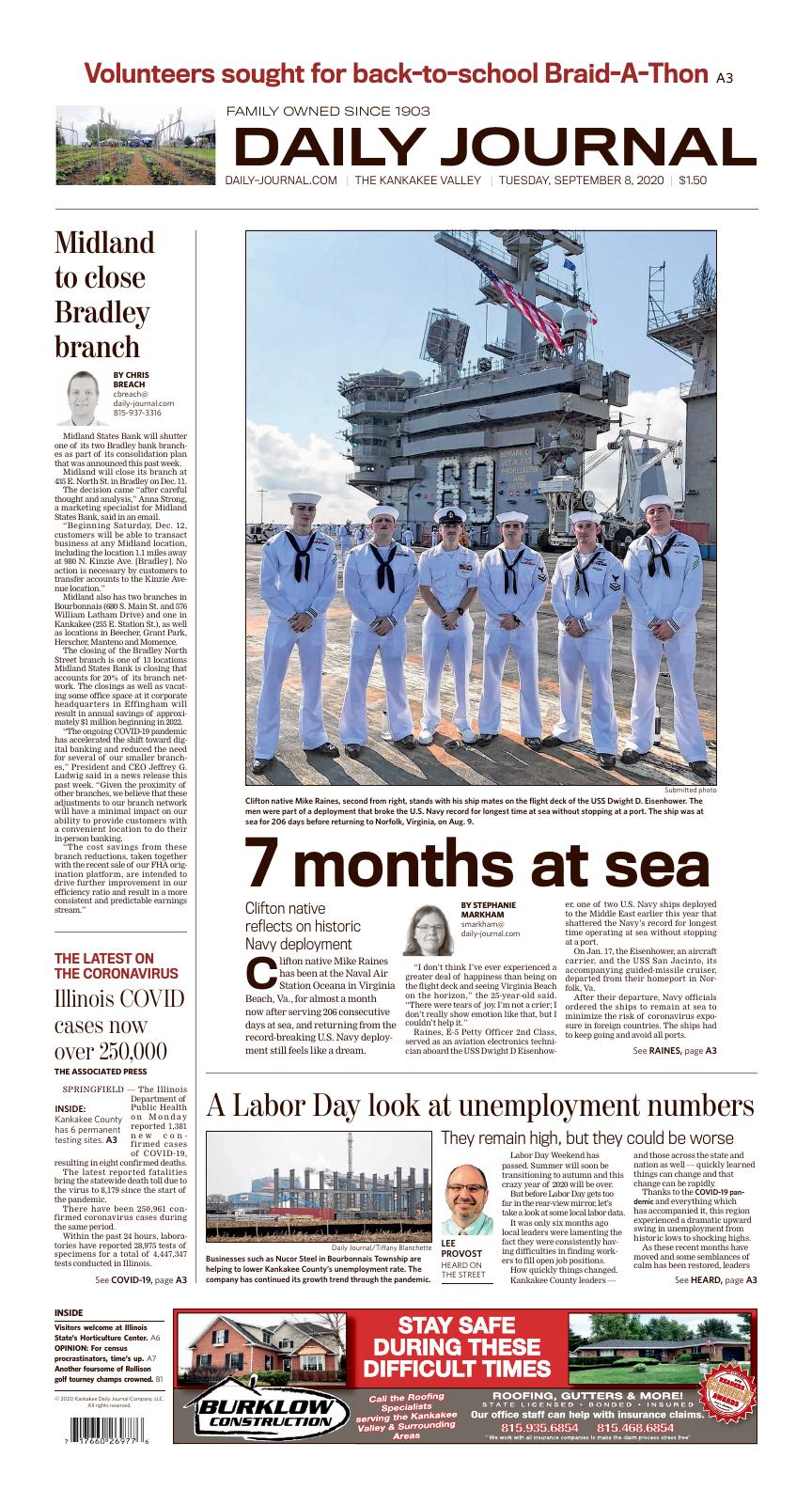 Clifton native Mike Raines has been at the Naval Air Station Oceana in Virginia Beach, Va., for almost a month now after serving 206 consecutive days at sea, and returning from the record-breaking U.S. Navy deployment still feels like a dream.

“I don’t think I’ve ever experienced a greater deal of happiness than being on the flight deck and seeing Virginia Beach on the horizon,” the 25-year-old said. “There were tears of joy. I’m not a crier; I don’t really show emotion like that, but I couldn’t help it.”

Raines, E-5 Petty Officer 2nd Class, served as an aviation electronics technician aboard the USS Dwight D Eisenhower, one of two U.S. Navy ships deployed to the Middle East earlier this year that shattered the Navy’s record for longest time operating at sea without stopping at a port.

On Jan. 17, the Eisenhower, an aircraft carrier, and the USS San Jacinto, its accompanying guided-missile cruiser, departed from their homeport in Norfolk, Va.

After their departure, Navy officials ordered the ships to remain at sea to minimize the risk of coronavirus exposure in foreign countries. The ships had to keep going and avoid all ports.

On June 25, the ships surpassed the Navy’s previous 160-day record, which had been set by the USS Theodore Roosevelt in February 2002 during a post- 9/11 deployment.

On Aug. 9, after a total of 206 days, the ships finally returned to Virginia.

Raines recalled the moment when an officer made the announcement in late July that they would be returning in two and a half weeks, about 10 days earlier than anticipated.

“The whole ship just erupted. Everyone was smiling ear to ear,” he said. “It was a good atmosphere, a good help to morale, but honestly, the closer you get to coming home, I swear the days add 10 hours for every day it gets closer.”

Raines’ duties aboard the Eisenhower included maintaining and repairing the electronic and weapons systems of fighter jets and helicopters as well as supervising other crew members.

He said the heavy workload over such a long period of time was exhausting.

“I don’t think I’ve ever been that mentally drained in my entire life, because when you’re out there, you work 12 hours a day, every day, seven days a week,” he said.

Raines’ hard work paid off, however. He found out he was selected for a promotion to the E-5 rank 185 days into his deployment.

“Apparently I impressed some people and got a really good evaluation,” he said.

Some other exciting distinctions also came out of the long stretch at sea.

The crews of the San Jacinto and Eisenhower earned a unique “iron shellback” recognition.

Navy members have traditional “shellback” ceremonies to recognize one another for crossing the equator for the first time. The “iron shellback” title refers to those who first cross the equator after 100-plus consecutive days at sea.

The crews might also earn a new ribbon that has never been awarded before. If military officials approve, they will be the first to receive a Sea Service Endurance Ribbon.

“It was an experience that I wouldn’t wish on my worst enemy, but I’m proud to be a part of it,” Raines said. “It’s history.”

Raines used his free time after shifts or on occasional Saturdays off to work out in the ship’s gyms, which helped him to stay positive. Another big motivator was maintaining email communication with his parents and friends.

After graduating from Clifton Central High School in 2013, Raines played baseball and earned a bachelor’s degree in business administration at McMurray College in Jacksonville, Ill.

By his junior year of college, Raines began thinking about enlisting in the military to follow in the footsteps of family members.

Raines said he will probably move on from his service in the Navy after returning home at the end of next year. He will have served for four years.

He plans to use the G.I. Bill to earn a master’s degree. He hopes to continue studying finance and become a financial adviser.

Because of ongoing COVID-19 restrictions, Raines is not allowed to take leave and visit home just yet; he has to remain within a 250-mile radius of the base in Virginia. Family members have been visiting him there.

“It was a hell of an experience,” Raines said. “I would never want to do it again, but I am proud to be a part of it.”

Businesses such as Nucor Steel in Bourbonnais Township are helping to lower Kankakee County’s unemployment rate. The company has continued its growth trend through the pandemic.

Labor Day Weekend has passed. Summer will soon be transitioning to autumn and this crazy year of 2020 will be over.

But before Labor Day gets too far in the rear-view mirror, let’s take a look at some local labor data.

It was only six months ago local leaders were lamenting the fact they were consistently having difficulties in finding workers to fill open job positions.

Kankakee County leaders — and those across the state and nation as well — quickly learned things can change and that change can be rapidly.

Thanks to the COVID-19 pandemic and everything which has accompanied it, this region experienced a dramatic upward swing in unemployment from historic lows to shocking highs.

As these recent months have moved and some semblances of calm has been restored, leaders are starting to dive into the unemployment situation.

According to the Illinois Department of Employment Security, Illinois has a July unemployment rate of 11.3 percent. That figure, of course, is high particularly when compared to one year ago when the rate rested at 4.2 percent.

In Kankakee County, July unemployment stands at 9.5 percent, a sizable increase from the 4.7 percent of July 2019.

State figures in July for Kankakee County show that the county has a 55,044-member labor force. Of that total, 5,242 are unemployed.

The City of Kankakee’s unemployment rate is 12.8 percent, up from 6.3 percent in July 2019. The state does not report figures for any other community within Kankakee County. Joliet has a 12.9 percent rate, up from 4.9 percent last July.

The United States in July has a 10.5 percent unemployment rate. Throughout Illinois, the state has a 6.3-million member workforce and currently 715,559 workers are jobless.

Tim Nugent, president and CEO of the Economic Alliance of Kankakee County and Manteno mayor, said Kankakee County is fortunate to have many businesses considered as “essential” — such as steel production, medical production and food production. Those businesses were able to keep functioning throughout this pandemic.

“Our employment base has been a real benefit to us. The areas which are driving these unemployment numbers are those connected to restaurants, bars, tourism, hotels,” he said. “The bulk of the unemployment is related to the hospitality industry. That industry has been hit hard.”

Asked how low the unemployment figure could get by year’s end, Nugent said that largely depends on avoiding any backward movement in terms of virus mitigation as determined by the state.

He said barring any unforeseen negative movements, Kankakee County may perhaps have unemployment as low as 8 percent by the end of 2020. While that number is a far cry from the 4 percent to 5 percent range of earlier this year, it’s is still movement in the right direction.

“Look at the news with McKesson Corp. They are talking about hiring 600 people. That number of hires would take us down a full percentage point. That’s the direction we want to be headed.”

Sam Salustro, an IDES spokesman, said credited Kankakee County for getting its unemployment rate headed in the right direction.

Like Nugent, Salustro said the hospitality sector is struggling. He said it will continue to struggle until a vaccine is released or until the positivity rate is low enough for people to feel comfortable once again.

“It’s about the consumers’ state of mind,” he said.

Midland States Bank will shutter one of its two Bradley bank branches as part of its consolidation plan that was announced this past week.

The decision came “after careful thought and analysis,” Anna Strong, a marketing specialist for Midland States Bank, said in an email.

“Beginning Saturday, Dec. 12, customers will be able to transact business at any Midland location, including the location 1.1 miles away at 980 N. Kinzie Ave. [Bradley]. No action is necessary by customers to transfer accounts to the Kinzie Avenue location.”

Midland also has two branches in Bourbonnais (680 S. Main St. and 576 William Latham Drive) and one in Kankakee (255 E. Station St.), as well as locations in Beecher, Grant Park, Herscher, Manteno and Momence.

The closing of the Bradley North Street branch is one of 13 locations Midland States Bank is closing that accounts for 20% of its branch network. The closings as well as vacating some office space at it corporate headquarters in Effingham will result in annual savings of approximately $1 million beginning in 2022.

“The ongoing COVID-19 pandemic has accelerated the shift toward digital banking and reduced the need for several of our smaller branches,” President and CEO Jeffrey G. Ludwig said in a news release this past week. “Given the proximity of other branches, we believe that these adjustments to our branch network will have a minimal impact on our ability to provide customers with a convenient location to do their in-person banking.

“The cost savings from these branch reductions, taken together with the recent sale of our FHA origination platform, are intended to drive further improvement in our efficiency ratio and result in a more consistent and predictable earnings stream.”

The latest reported fatalities bring the statewide death toll due to the virus to 8,179 since the start of the pandemic.

There have been 250,961 confirmed coronavirus cases during the same period.

Within the past 24 hours, laboratories have reported 28,975 tests of specimens for a total of 4,447,347 tests conducted in Illinois.

That brings the seven-day statewide positivity rate for cases as a percent of total tests to 4.2%.

Heading into the Labor Day weekend National Institute of Allergy and Infectious Diseases Director Anthony Fauci said Illinois and a half-dozen other states with increasing COVID-19 numbers are at risk for a surge in cases over the holiday.

As of late Sunday, 1,484 people in Illinois were reported hospitalized with COVID-19. Of those, 352 patients were in intensive care units and 137 patients with COVID-19 were on ventilators.

4. Present your insurance card and identification when requested

Cost: Insurance will be billed

Cost: Insurance will be billed

1. Open to anyone regardless of symptoms

Cost: Insurance will be billed. Or out-of-pocket, same-day pricing is $200 (includes provider visit, COVID-19 swab, and a telehealth follow-up)

1. Physical exam required prior to testing

2. Bring your insurance card, ID, and proof of employment (if applicable)

Note: Due to limited supplies, COVID-19 testing availability is very limited and may not be available all day.

1. Answer a questionnaire online to find out if you qualify

2. Complete the registration form at minuteclinic.com. An appointment must be scheduled.

3. Insurance card (if applicable) and ID is required.

Cost: Patients should not have any out-of-pocket costs. Insurance will be billed. If you do not have insurance, have your driver’s license, state ID, or Social Security number so the cost can be submitted to the federal program for the uninsured. 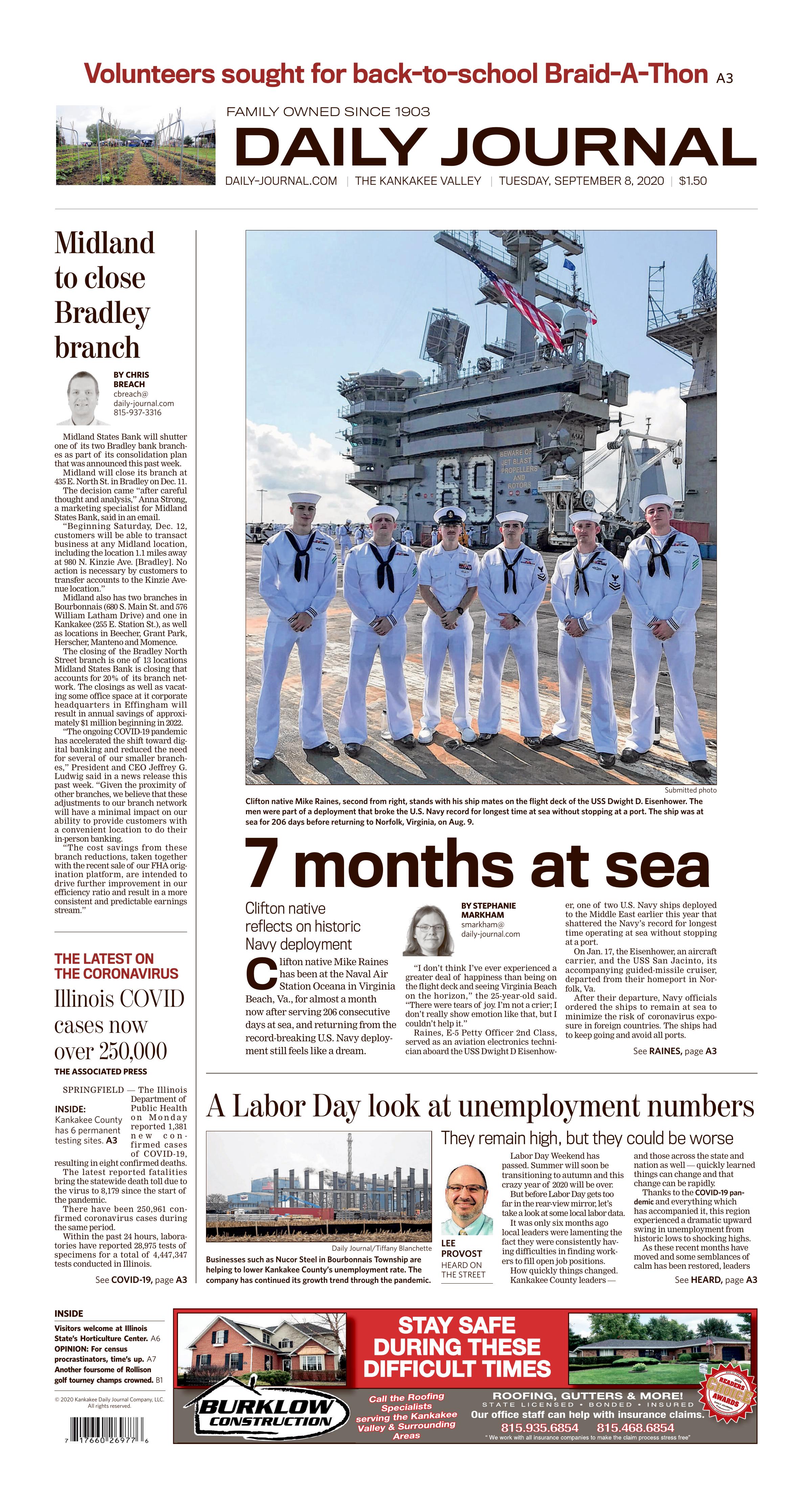