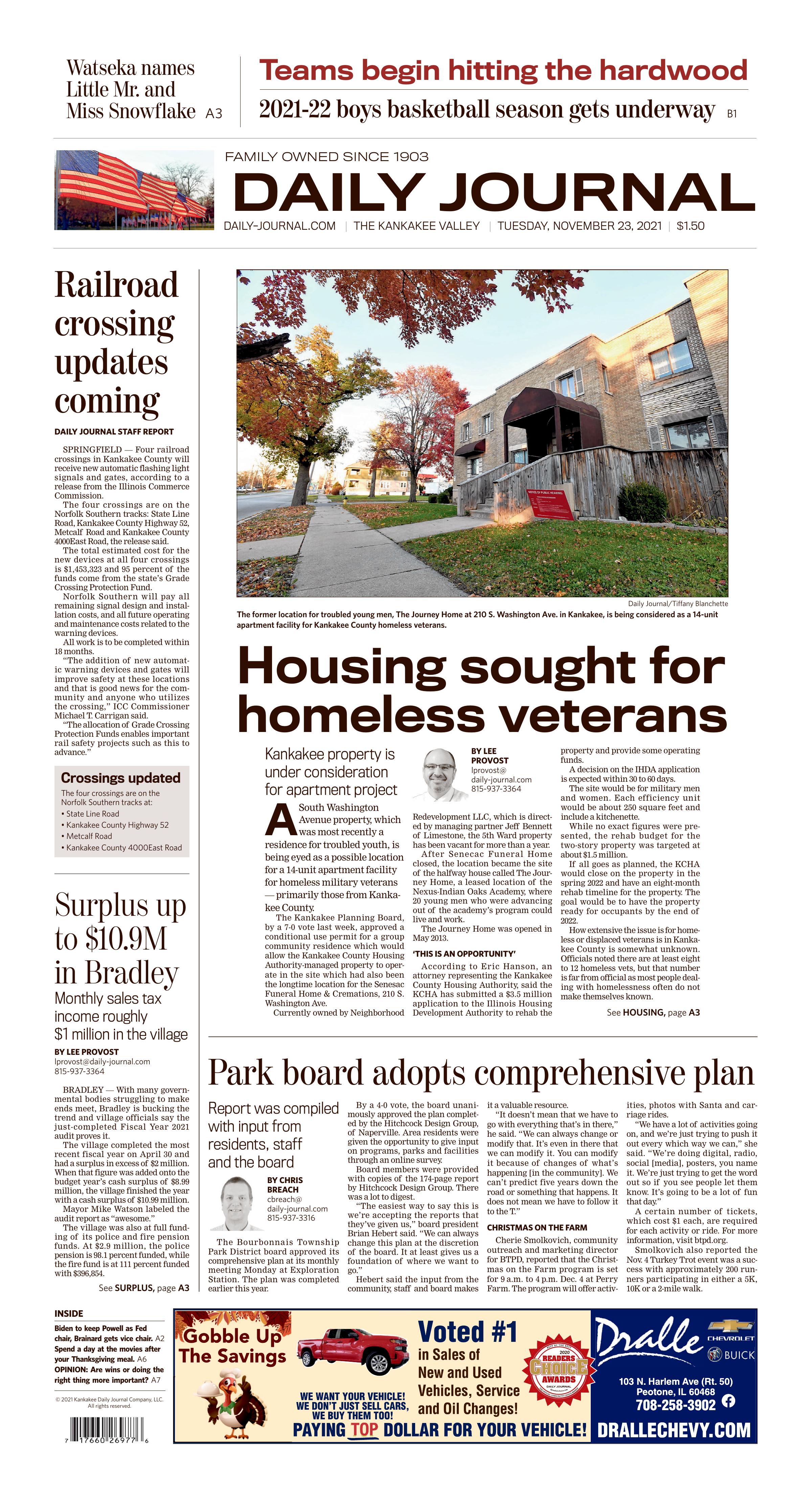 The former location for troubled young men, The Journey Home at 210 S. Washington Ave. in Kankakee, is being considered as a 14-unit apartment facility for Kankakee County homeless veterans.

KANKAKEE — A South Washington Avenue property, which was most recently a residence for troubled youth, is being eyed as a possible location for a 14-unit apartment facility for homeless military veterans — primarily those from Kankakee County.

The Kankakee Planning Board, by a 7-0 vote last week, approved a conditional use permit for a group community residence which would allow the Kankakee County Housing Authority-managed property to operate in the site which had also been the longtime location for the Senesac Funeral Home & Cremations, 210 S. Washington Ave.

Currently owned by Neighborhood Redevelopment LLC, which is directed by managing partner Jeff Bennett of Limestone, the 5th Ward property has been vacant for more than a year.

After Senecac Funeral Home closed, the location became the site of the halfway house called The Journey Home, a leased location of the Nexus-Indian Oaks Academy, where 20 young men who were advancing out of the academy’s program could live and work.

The Journey Home was opened in May 2013.

‘THIS IS AN OPPORTUNITY’

According to Eric Hanson, an attorney representing the Kankakee County Housing Authority, said the KCHA has submitted a $3.5 million application to the Illinois Housing Development Authority to rehab the property and provide some operating funds.

A decision on the IHDA application is expected within 30 to 60 days.

The site would be for military men and women. Each efficiency unit would be about 250 square feet and include a kitchenette.

While no exact figures were presented, the rehab budget for the two-story property was targeted at about $1.5 million.

If all goes as planned, the KCHA would close on the property in the spring 2022 and have an eight-month rehab timeline for the property. The goal would be to have the property ready for occupants by the end of 2022.

How extensive the issue is for homeless or displaced veterans is in Kankakee County is somewhat unknown. Officials noted there are at least eight to 12 homeless vets, but that number is far from official as most people dealing with homelessness often do not make themselves known.

Doug Jones, KCHA board chairman, said veterans are always prioritized on the agency’s waiting list, but having a location dedicated to veterans has long been a goal.

“This is an opportunity. It just seems like a great way to serve our veterans,” Jones said. “This just feels like the right thing to do.”

The goal of this housing program is to help get struggling veterans back onto their feet, Jones said. During the presentation to the planning board, Hanson noted there is no timeline as to how long a veteran can call the location home.

To be eligible to stay at the home, the veteran must be income restricted. The income guideline states they cannot be earning more than 30 percent of the area’s median income, in this case that would equate to yearly income of less than $15,000.

While all those making comment during the discussion extended thanks to veterans for their service, there were many concerns as to whether the South Washington property was the proper location.

There were eight Kankakee City Council members present for the hearing.

Kankakee 3rd Ward Alderman David Crawford asked, “Is this the project we want in the downtown area, yes or no? I don’t know. We really need to think what we are doing here.”

The city is looking to somewhat expand its downtown footprint and development is moving outward of it. The concern is whether a project like this will discourage private investment.

Some council members noted that homelessness of veterans is a countywide issue. And because it is an issue for all of Kankakee County, could the home be located elsewhere?

Hanson said constructing a new residence would be far more expensive than rehabbing this site.

“Right now, it’s a vacant building,” he said, adding that if it remained that way it could lead to other issues.

“Kankakee can have redevelopment in its downtown and this fantastic project. These two things do not need to be mutually exclusive,” Hanson said.

He also noted the veterans would become part of the neighborhood and likely find work in nearby businesses, which are struggling to find workers.

Jones said this issue does not need to be an “either-or” choice.

“We can coexist,” he said. “We want to be good neighbors.”

More than 200 runners/walkers — with some using the opportunity to get festive — took part in Bourbonnais Township Park District’s Turkey Trot on Nov. 6. MORE LOCAL PHOTOS.

The Bourbonnais Township Park District board approved its comprehensive plan at its monthly meeting Monday at Exploration Station. The plan was completed earlier this year.

By a 4-0 vote, the board unanimously approved the plan completed by the Hitchcock Design Group, of Naperville. Area residents were given the opportunity to give input on programs, parks and facilities through an online survey.

Board members were provided with copies of the 174-page report by Hitchcock Design Group. There was a lot to digest.

“The easiest way to say this is we’re accepting the reports that they’ve given us,” board president Brian Hebert said. “We can always change this plan at the discretion of the board. It at least gives us a foundation of where we want to go.”

Hebert said the input from the community, staff and board makes it a valuable resource.

“It doesn’t mean that we have to go with everything that’s in there,” he said. “We can always change or modify that. It’s even in there that we can modify it. You can modify it because of changes of what’s happening [in the community]. We can’t predict five years down the road or something that happens. It does not mean we have to follow it to the T.”

Christmas on the Farm

Cherie Smolkovich, community outreach and marketing director for BTPD, reported that the Christmas on the Farm program is set for 9 a.m. to 4 p.m. Dec. 4 at Perry Farm. The program will offer activities, photos with Santa and carriage rides.

“We have a lot of activities going on, and we’re just trying to push it out every which way we can,” she said. “We’re doing digital, radio, social [media], posters, you name it. We’re just trying to get the word out so if you see people let them know. It’s going to be a lot of fun that day.”

A certain number of tickets, which cost $1 each, are required for each activity or ride. For more information, visit btpd.org.

Smolkovich also reported the Nov. 4 Turkey Trot event was a success with approximately 200 runners participating in either a 5K, 10K or a 2-mile walk.

SPRINGFIELD — Four railroad crossings in Kankakee County will receive new automatic flashing light signals and gates, according to a release from the Illinois Commerce Commission.

The total estimated cost for the new devices at all four crossings is $1,453,323 and 95 percent of the funds come from the state’s Grade Crossing Protection Fund.

Norfolk Southern will pay all remaining signal design and installation costs, and all future operating and maintenance costs related to the warning devices.

All work is to be completed within 18 months.

“The addition of new automatic warning devices and gates will improve safety at these locations and that is good news for the community and anyone who utilizes the crossing,” ICC Commissioner Michael T. Carrigan said.

“The allocation of Grade Crossing Protection Funds enables important rail safety projects such as this to advance.”

The four crossings are on the Norfolk Southern tracks at:

The Village of Bradley has a cash surplus of $10.99 million thanks in part to the amount of sales tax collected as it is the region's retail hub. 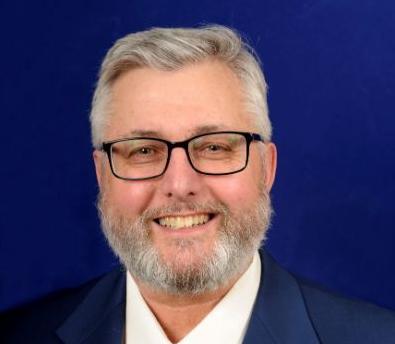 BRADLEY — With many governmental bodies struggling to make ends meet, Bradley is bucking the trend and village officials say the just-completed Fiscal Year 2021 audit proves it.

The village was also at full funding of its police and fire pension funds. At $2.9 million, the police pension is 98.1 percent funded, while the fire fund is at 111 percent funded with $396,854.

At the conclusion of the audit report from Brad Porter, of the Naperville accounting firm, Lauterbach & Amen, LLP, he praised the village administration for making “some very solid fiscal decisions, especially during some very challenging years.”

Watson, in a joking fashion, asked village finance director Rob Romo if there will be even better news after the next fiscal year audit.

After the board meeting, Romo said the village is perhaps in the strongest fiscal position it has ever been in.

Watson was obviously pleased with the report and didn’t downplay his administration’s role in its success.

“We know how to manage a business and a municipality and lower taxes for the residents,” he said.

He was asked how much budget surplus he would be comfortable with. He hedged on the answer by stating he wants the village in a “healthy” fiscal spot.

Romo noted the village is also following through on its pledge to rebate the village’s portion of property taxes because of the strong financial position it finds itself in.

Romo noted the 1 percentage-point increase in the village’s portion of the sales tax is a chief reason for the surplus. He said the village is realizing about $1 million monthly on sales tax income, roughly a 40 percent increase over the revenue generate prior to the tax rate increase.

He said on a monthly basis, Bradley retailers are selling merchandise at a $100-million-per-month rate. He said business at locations such as Lowe’s Home Improvement, Menards, Target, Walmart and car dealerships is robust.

“Things are really looking bright in our town,” he said.

Romo noted the village is not simply sitting on its cash reserves. He said the village is working on resurfacing streets and alleys and is looking to upgrade the parks as well.