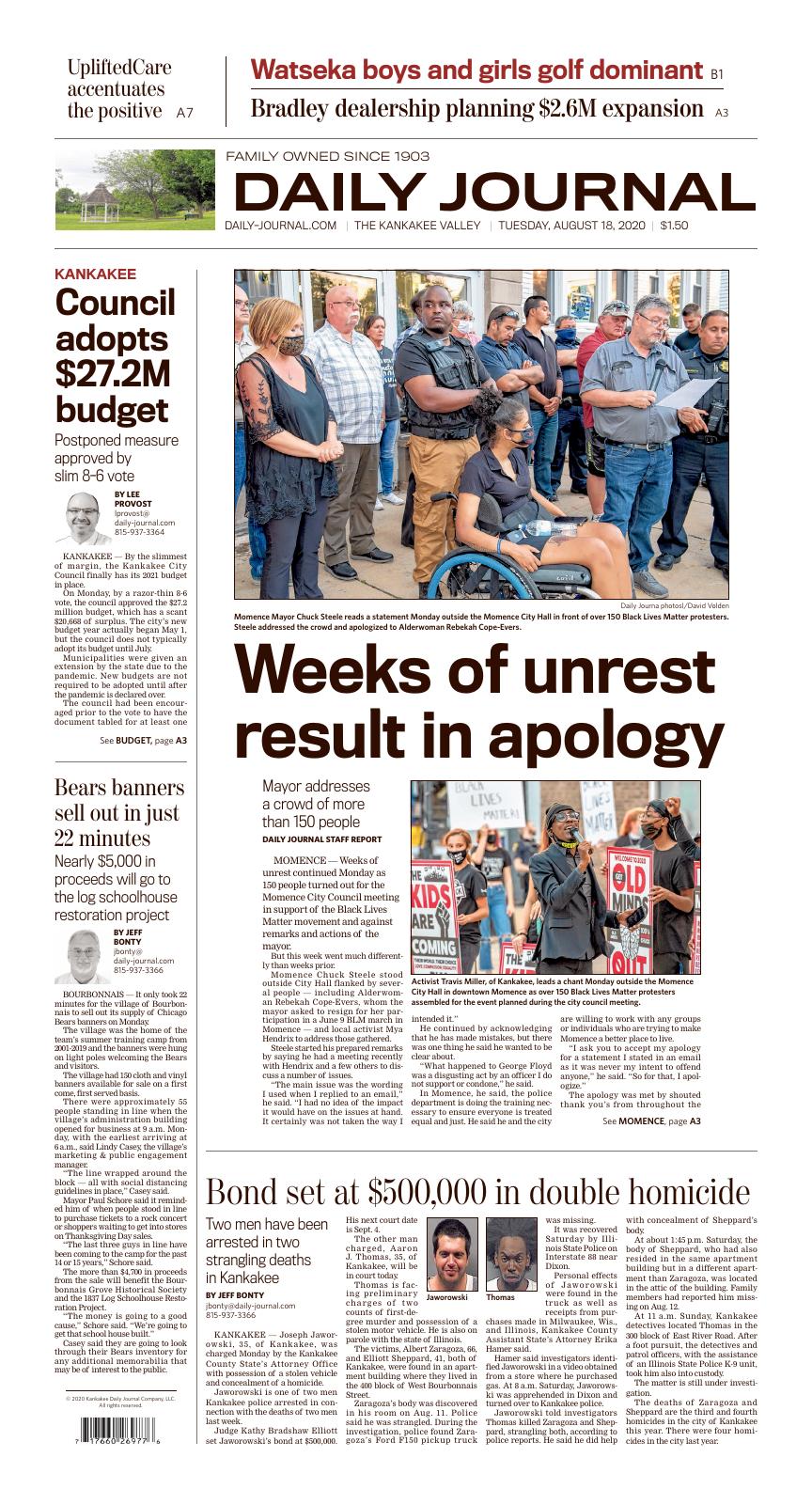 Activist Travis Miller, of Kankakee, leads a chant Monday outside the Momence City Hall in downtown Momence as over 150 Black Lives Matter protesters assembled for the event planned during the city council meeting.

Rodney Schuler and Denise Turner, of Momence, confront Black Lives Matter protesters Monday outside the Momence City Hall. “The only thing racist about Momence is the people from out of town contaminating our streets with racism,” Schuler said.

Roxanne Amber and Jade Routson, sisters who grew up in Momence, carry signs during Monday’s protest outside the Momence City Hall. “I’ve seen Mya [Hendrix] week after week out here and I wanted more Momence people to show up and condemn racism,” Routson said. “This is a diverse community and there are a lot of anti-racist people here.”

MOMENCE — Weeks of unrest continued Monday as 150 people turned out for the Momence City Council meeting in support of the Black Lives Matter movement and against remarks and actions of the mayor.

But this week went much differently than weeks prior.

Momence Chuck Steele stood outside City Hall flanked by several people — including Alderwoman Rebekah Cope-Evers, whom the mayor asked to resign for her participation in a June 9 BLM march in Momence — and local activist Mya Hendrix to address those gathered.

Steele started his prepared remarks by saying he had a meeting recently with Hendrix and a few others to discuss a number of issues.

“The main issue was the wording I used when I replied to an email,” he said. “I had no idea of the impact it would have on the issues at hand. It certainly was not taken the way I intended it.”

He continued by acknowledging that he has made mistakes, but there was one thing he said he wanted to be clear about.

“What happened to George Floyd was a disgusting act by an officer I do not support or condone,” he said.

In Momence, he said, the police department is doing the training necessary to ensure everyone is treated equal and just. He said he and the city are willing to work with any groups or individuals who are trying to make Momence a better place to live.

“I ask you to accept my apology for a statement I stated in an email as it was never my intent to offend anyone,” he said. “So for that, I apologize.”

The apology was met by shouted thank you’s from throughout the crowd gathered and clapping.

His words were again met with clapping when he apologized to Cope-Evers and said he should not have asked for her resignation.

Hendrix followed his remarks by thanking the crowd for continuing to turn out and for “fighting for justice with me and fighting for what’s right.”

She also said in her discussions with the mayor that he agreed to support a Unity Day event in Momence that would “encourage young voters and to educate people in this community.”

She also addressed the counterprotestors who turned out Monday, marking the second city council meeting they attended in support of the community.

“We’re not here to cause drama,” she said. “We just wanted to get your attention to the problems that are at hand.”

She said she was grateful to anyone who is listening and that she hopes to see them at the Unity Day event, asking them to “come with an open mind and open heart.”

“Since you support your mayor so much, support what he’s doing with the community now,” she said.

KANKAKEE — Joseph Jaworowski, 35, of Kankakee, was charged Monday by the Kankakee County State’s Attorney Office with possession of a stolen vehicle and concealment of a homicide.

Jaworowski is one of two men Kankakee police arrested in connection with the deaths of two men last week.

The other man charged, Aaron J. Thomas, 35, of Kankakee, will be in court today.

Thomas is facing preliminary charges of two counts of first-degree murder and possession of a stolen motor vehicle. He is also on parole with the state of Illinois.

The victims, Albert Zaragoza, 66, and Elliott Sheppard, 41, both of Kankakee, were found in an apartment building where they lived in the 400 block of West Bourbonnais Street.

Zaragoza’s body was discovered in his room on Aug. 11. Police said he was strangled. During the investigation, police found Zaragoza’s Ford F150 pickup truck was missing.

It was recovered Saturday by Illinois State Police on Interstate 88 near Dixon.

Personal effects of Jaworowski were found in the truck as well as receipts from purchases made in Milwaukee, Wis., and Illinois, Kankakee County Assistant State’s Attorney Erika Hamer said.

Hamer said investigators identified Jaworowski in a video obtained from a store where he purchased gas. At 8 a.m. Saturday, Jaworowski was apprehended in Dixon and turned over to Kankakee police.

Jaworowski told investigators Thomas killed Zaragoza and Sheppard, strangling both, according to police reports. He said he did help with concealment of Sheppard’s body.

At about 1:45 p.m. Saturday, the body of Sheppard, who had also resided in the same apartment building but in a different apartment than Zaragoza, was located in the attic of the building. Family members had reported him missing on Aug. 12.

At 11 a.m. Sunday, Kankakee detectives located Thomas in the 300 block of East River Road. After a foot pursuit, the detectives and patrol officers, with the assistance of an Illinois State Police K-9 unit, took him also into custody.

The matter is still under investigation.

KANKAKEE — By the slimmest of margin, the Kankakee City Council finally has its 2021 budget in place.

On Monday, by a razor-thin 8-6 vote, the council approved the $27.2 million budget, which has a scant $20,668 of surplus. The city’s new budget year actually began May 1, but the council does not typically adopt its budget until July.

Municipalities were given an extension by the state due to the pandemic. New budgets are not required to be adopted until after the pandemic is declared over.

The council had been encouraged prior to the vote to have the document tabled for at least one more meeting by Budget Committee Chairman Mike O’Brien, D-2, so more fiscal data could be reviewed and analyzed regarding what the COVID-19 pandemic is doing to city sales tax receipts as well as learning at what pace the second installment of property taxes would be coming in.

The second installment of property taxes is due by Sept. 3.

O’Brien’s suggestion, however, never took root and instead the council voted to adopt the document.

O’Brien noted that unaudited figures from the recently completed FY 2019 showed the city had projected a budget surplus of $45,374. As of Monday, the city’s 2019 budget was coming in with budget debt of $247,424.

He noted by comparison, FY 2019 will be considered a good year when compared to the COVID-19 economic slowdown for the months of May, June, July and what may unfold in the coming months.

After the meeting, Mayor Chasity Wells-Armstrong was asked if she was concerned with the budget’s narrow passage. She said she was not.

“I’m not concerned by the vote. As we have always said, the budget can be amended,” she said. “I’m very comfortable with the budget.”

The need to get the budget adopted was more than just about having a spending document to operate the city by. Having a budget in place is needed to sell government obligation bonds and the city will soon be going to the bond market to sell up to $10.5 million of GO bonds.

The city is targeted these monies for Eastridge Drive improvements in east Kankakee at the site of the proposed Ricky Rockets Fuel Center. Additional monies are being targeted for road work throughout the city, police cars, police body cameras, a new fire engine, fire radios and other public safety purchases.

A portion of the bond money would also be used for planning consultants and engineer work for projects included in the bonds.

Government bonds are not unlike residents using credit cards. Purchases are made on a credit card and the debt is paid off over time with interest added onto the balance.

The administration is also seeking to refinance up to $16.3 million of existing bond debt to at a lower interest rate — which would reduce annual bond payments — if lower rates present themselves.

Now retired Bourbonnais employee Randy Rewerts hangs a welcome banner near Olivet Nazarene University back in 2011 in anticipation of Bears training camp. The village sold out of its 148 banners in 22 minutes on Monday. The proceeds go to the Bourbonnais Grove Historical Society’s restoration project of the 1837 log school house.

BOURBONNAIS — It only took 22 minutes for the village of Bourbonnais to sell out its supply of Chicago Bears banners on Monday.

The village was the home of the team’s summer training camp from 2001-2019 and the banners were hung on light poles welcoming the Bears and visitors.

The village had 150 cloth and vinyl banners available for sale on a first come, first served basis.

There were approximately 55 people standing in line when the village’s administration building opened for business at 9 a.m. Monday, with the earliest arriving at 6 a.m., said Lindy Casey, the village’s marketing & public engagement manager.

“The line wrapped around the block — all with social distancing guidelines in place,” Casey said.

Mayor Paul Schore said it reminded him of when people stood in line to purchase tickets to a rock concert or shoppers waiting to get into stores on Thanksgiving Day sales.

“The last three guys in line have been coming to the camp for the past 14 or 15 years,” Schore said.

The more than $4,700 in proceeds from the sale will benefit the Bourbonnais Grove Historical Society and the 1837 Log Schoolhouse Restoration Project.

“The money is going to a good cause,” Schore said. “We’re going to get that school house built.”

Casey said they are going to look through their Bears inventory for any additional memorabilia that may be of interest to the public. 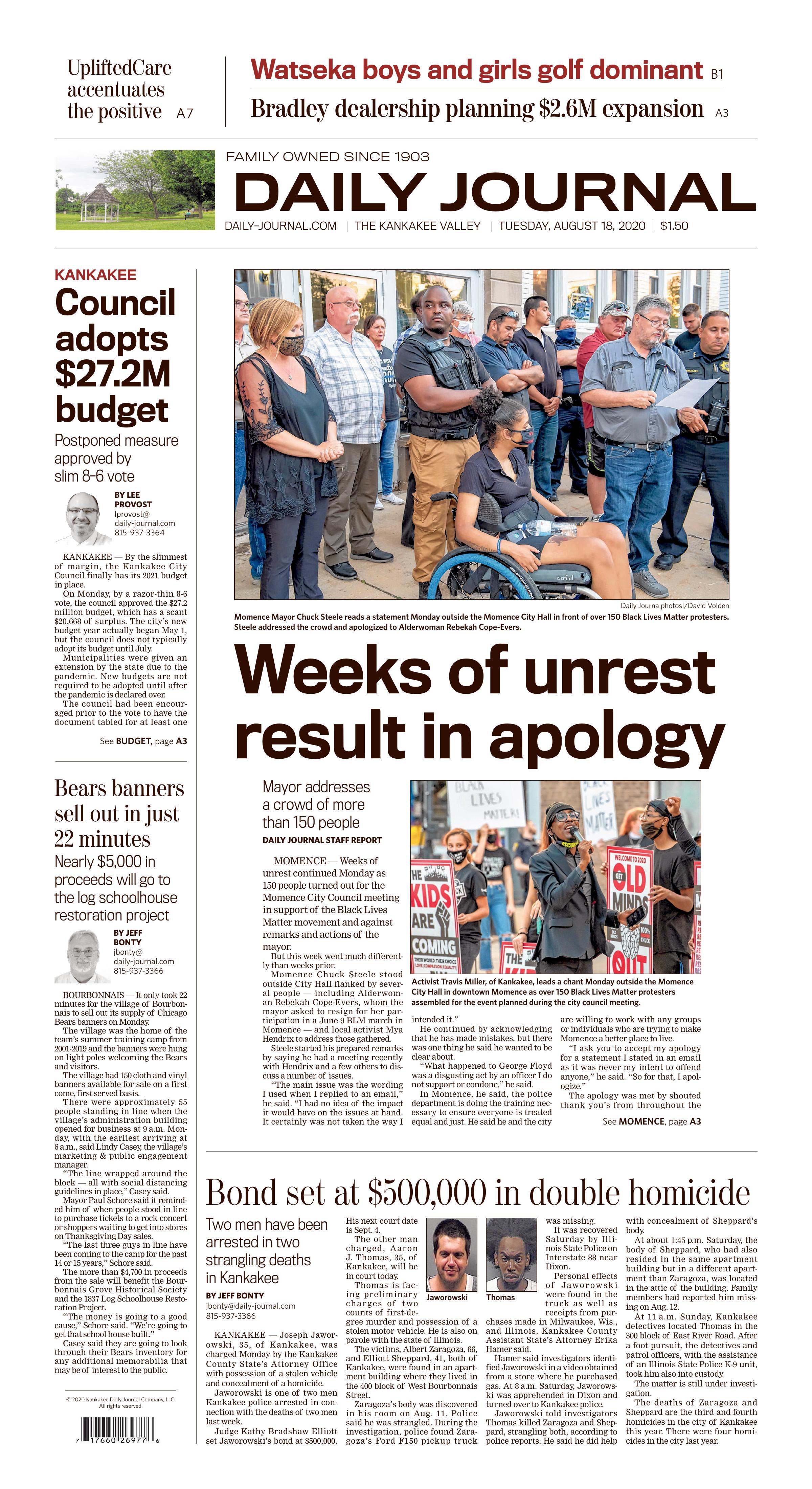