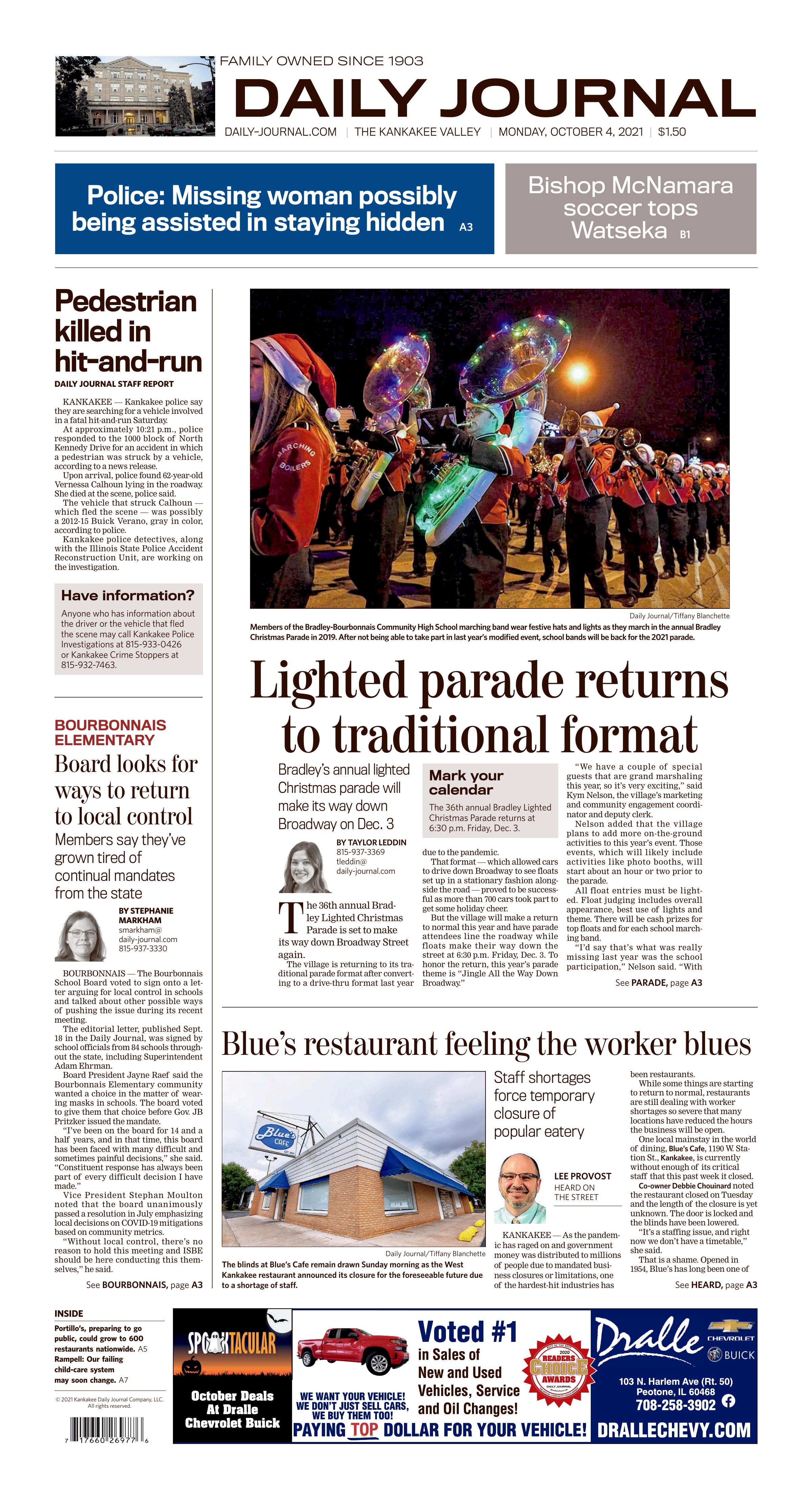 Members of the Bradley-Bourbonnais Community High School marching band wear festive hats and lights as they march in the annual Bradley Christmas Parade in 2019. After not being able to take part in last year’s modified event, school bands will be back for the 2021 parade.

The village is returning to its traditional parade format after converting to a drive-thru format last year due to the pandemic.

That format — which allowed cars to drive down Broadway to see floats set up in a stationary fashion alongside the road — proved to be successful as more than 700 cars took part to get some holiday cheer.

But the village will make a return to normal this year and have parade attendees line the roadway while floats make their way down the street at 6:30 p.m. Friday, Dec. 3. To honor the return, this year’s parade theme is “Jingle All the Way Down Broadway.”

“We have a couple of special guests that are grand marshaling this year, so it’s very exciting,” said Kym Nelson, the village’s marketing and community engagement coordinator and deputy clerk.

Nelson added that the village plans to add more on-the-ground activities to this year’s event. Those events, which will likely include activities like photo booths, will start about an hour or two prior to the parade.

All float entries must be lighted. Float judging includes overall appearance, best use of lights and theme. There will be cash prizes for top floats and for each school marching band.

“I’d say that’s what was really missing last year was the school participation,” Nelson said. “With COVID, it was just difficult to include [schools] with the mitigations.”

Individuals, companies and organizations looking to have a float in the parade are welcome to submit entry forms. They are to be submitted by Nov. 10 and can be mailed to Bradley Christmas Parade, 147 S. Michigan, Bradley, 60915; faxed to 815-933-9496; or emailed to parade@bradleyil.org. For questions, call Nelson at 815-936-5103.

“We’re excited to be able to have everyone come back,” Nelson said. “It brings camaraderie with the bands marching and the different floats and trucks.”

The village is also planning a business-decorating contest for businesses on Broadway Street and will be announcing information on that soon via social media. Nelson said this will be in conjunction with Shop Small Saturday, held Nov. 27, and winning businesses will be announced on the day of the parade.

“We will give out the prizes at the first village board meeting in December, which will be a donation to the favorite charity [of the winning business],” Nelson said.

KANKAKEE — As the pandemic has raged on and government money was distributed to millions of people due to mandated business closures or limitations, one of the hardest-hit industries has been restaurants.

While some things are starting to return to normal, restaurants are still dealing with worker shortages so severe that many locations have reduced the hours the business will be open.

One local mainstay in the world of dining, Blue’s Cafe, 1190 W. Station St., Kankakee, is currently without enough of its critical staff that this past week it closed.

Co-owner Debbie Chouinard noted the restaurant closed on Tuesday and the length of the closure is yet unknown. The door is locked and the blinds have been lowered.

“It’s a staffing issue, and right now we don’t have a timetable,” she said.

That is a shame. Opened in 1954, Blue’s has long been one of Kankakee County’s most popular eateries and its interior brings a visitor warmly back to the days of the neighborhood diner.

According to National Restaurant Association data issued in September, while eating and drinking places gained 1.3 million jobs during the first seven months of 2021, the industry is still 1 million jobs short of reaching the pre-pandemic level of 12.3 million.

However, anyone seeking a slice of Blue’s sought-after homemade pies is going to have to put that craving on hold.

According to the National Restaurant Association’s recently issued ”State of the Industry Mid-Year Update,” three of every four restaurants owners now report employee hiring and retention as their greatest difficulty. Many, of course, have been critical of extended unemployment benefits as the reason workers aren’t returning to the restaurants.

Not to place the blame on either the owners or the employees, but there are many workers who report that they need benefits, chiefly health insurance, and with the job market wide open, they are finding work elsewhere to fulfill that need.

Since the forced closure of restaurants in the early weeks and months of the COVID-19 pandemic, restaurants have been beating the bushes for staff. That beat goes on.

KANKAKEE — Kankakee police say they are searching for a vehicle involved in a fatal hit-and-run Saturday.

At approximately 10:21 p.m., police responded to the 1000 block of North Kennedy Drive for an accident in which a pedestrian was struck by a vehicle, according to a news release.

Upon arrival, police found 62-year-old Vernessa Calhoun lying in the roadway. She died at the scene, police said.

The vehicle that struck Calhoun — which fled the scene — was possibly a 2012-15 Buick Verano, gray in color, according to police.

Kankakee police detectives, along with the Illinois State Police Accident Reconstruction Unit, are working on the investigation.

Anyone who has information about the driver or the vehicle that fled the scene may call the Kankakee Police Investigations at 815-933-0426 or Kankakee Crime Stoppers at 815-932-7463.

BOURBONNAIS — The Bourbonnais School Board voted to sign onto a letter arguing for local control in schools and talked about other possible ways of pushing the issue during its recent meeting.

The editorial letter, published Sept. 18 in the Daily Journal, was signed by school officials from 84 schools throughout the state, including Superintendent Adam Ehrman.

Board President Jayne Raef said the Bourbonnais Elementary community wanted a choice in the matter of wearing masks in schools. The board voted to give them that choice before Gov. JB Pritzker issued the mandate.

“I’ve been on the board for 14 and a half years, and in that time, this board has been faced with many difficult and sometimes painful decisions,” she said. “Constituent response has always been part of every difficult decision I have made.”

Vice President Stephan Moulton noted that the board unanimously passed a resolution in July emphasizing local decisions on COVID-19 mitigations based on community metrics.

“Without local control, there’s no reason to hold this meeting and ISBE should be here conducting this themselves,” he said.

Board member Erika Young added that local control is not just about masks or vaccines; she also takes issue with mandates regarding school curriculum.

“It directly impacts our children’s education if the governor or the government of our state is controlling our curriculum on a local level,” she said.

In addition to signing onto the letter, discussion on “possible legal options regarding the governor’s executive orders” was also on the agenda.

Moulton said he requested the discussion because he feels it is something the board needs to consider.

Raef said that the board has made it clear where members stand on the issue of local control, and now, she feels they need to do something.

“I almost feel like our civil rights are being impaired in that we were elected to perform a duty as a board of education that they are now usurping; they are usurping by fiat,” she said. “I think if we don’t say no, that’s ours, and if we have already said that we preferred to support local control, then we can either pay lip service to that, or we can put rubber to the road.”

Ehrman said that there are different groups forming around this issue, including the group of school leaders that penned the letter, and some within that group who already passed resolutions to file lawsuits against Pritzker. Others are discussing possible action on behalf of a group of districts.

Board members agreed that they are in favor of local control, but they wanted more information on the options and possible consequences before getting involved in any sort of litigation.

Ehrman said the group of school leaders discussed that they were all facing the same dilemma of not being able to make decisions based on what’s going on in their communities, like they were able to do last year.

He said the group was looking to get superintendents and boards to sign onto the letter to grab the attention of state officials, as it would be easier to dismiss a letter from just one district.

“Every single day was a struggle last year, because our decisions were whether or not we were going to have school tomorrow, and that was like waking up on Groundhog Day, but it was not a fun day every day to prove why you should be in school and why you’re not out of school,” he said. “When that got flipped on its head this year that we don’t make any of those decisions, we’re dealing with all those implications and yet we don’t get to make any choices in it.”