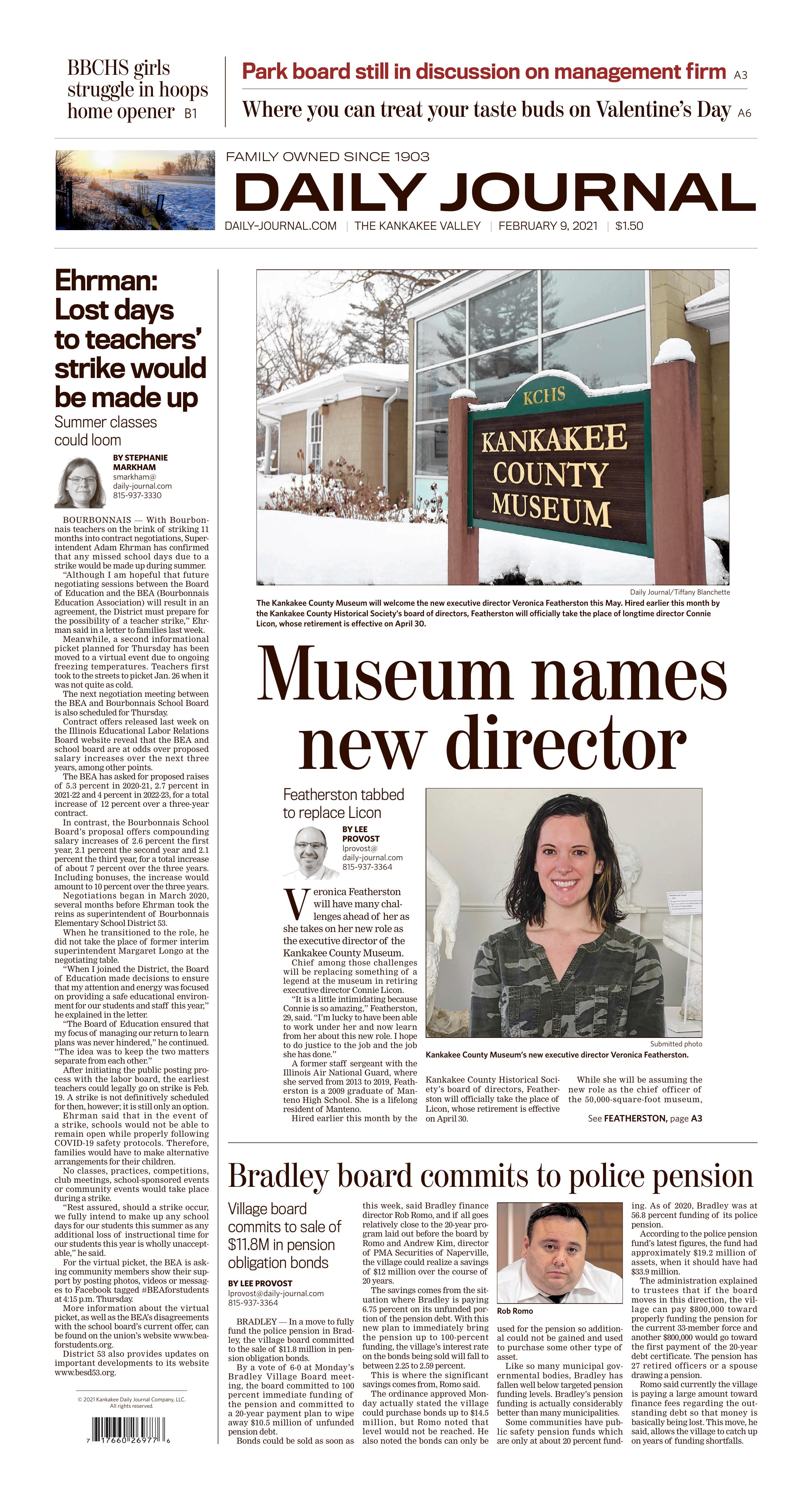 KANKAKEE — Veronica Featherston will have many challenges ahead of her as she takes on her new role as the executive director of the Kankakee County Museum.

Chief among those challenges will be replacing something of a legend at the museum in retiring executive director Connie Licon.

“It is a little intimidating because Connie is so amazing,” Featherston, 29, said. “I’m lucky to have been able to work under her and now learn from her about this new role. I hope to do justice to the job and the job she has done.”

A former staff sergeant with the Illinois Air National Guard, where she served from 2013 to 2019, Featherston is a 2009 graduate of Manteno High School. She is a lifelong resident of Manteno.

Hired earlier this month by the Kankakee County Historical Society’s board of directors, Featherston will officially take the place of Licon, whose retirement is effective on April 30.

While she will be assuming the new role as the chief officer of the 50,000-square-foot museum, working at the South Eighth Avenue property will not be new to Featherston. She has been associated with the museum since 2016.

Featherston has served as a volunteer curatorial assistant working with cataloging of historical objects and joined the museum as a paid staff member in January 2019 as its curator.

As curator of the museum, which opened in 1949, she was responsible for the care of the museum’s collection of materials; maintenance and development of exhibits; and supervisor of volunteers and part-time staff members.

Board president Robert de Oliveira said the museum board reviewed more than 60 applications. The search committee narrowed the list to three and interviewed each of the finalists.

“All three were highly qualified and interviewed well, but we felt that Veronica had the best combination of experience and potential for a long-term relationship with our museum,” he said.

Licon said she was thrilled with the selection of Featherston as her successor.

“She not only has a passion for the history of the county, she also has a wealth of both academic and practical experience in many areas,” Licon said.

She said Featherston has an undergraduate degree in anthropology and is working toward a master’s degree in public administration at Governors State University.

Featherston acknowledges she might seem somewhat young for the museum role, but it is a position she intends to be in for years to come.

“There is a lot of responsibility here. ... It’s my goal to retire in this position,” she said.

That thought, however, is for another day. When she officially takes the leadership position, she doesn’t foresee major changes, at least not at first.

She would like to get greater involvement from community organizations and businesses in an effort to expand exhibits. She also believes when COVID-19 restrictions are entirely removed, the public will be looking for places to explore, and she wants one of those places to be the museum.

Currently, the location is still limited to 50 percent capacity. That percentage would translate to having as many as 40 visitors.

“This is already a great institution. But the more community involvement we can get, the better our museum will be. It my goal to get our community more engaged.”

She also noted it is her absolute intention to have the annual Christmas Tree display ready for the public come December 2021. Like so many other local traditions, the Christmas Tree exhibit was canceled this past holiday season.

For now, however, she is making sure she is ready to hit the ground running May 1 when she’s handed the the museum’s keys.

Featherston has to pinch herself sometimes as a reminder of the dream job she holds.

“Going into the interview process I was hopeful and excited for the opportunity,” she said. “This was not the position I ever thought I would have. I guess I never saw Connie not being here.”

BRADLEY — In a move to fully fund the police pension in Bradley, the village board committed to the sale of $11.8 million in pension obligation bonds.

By a vote of 6-0 at Monday’s Bradley Village Board meeting, the board committed to 100 percent immediate funding of the pension and committed to a 20-year payment plan to wipe away $10.5 million of unfunded pension debt.

Bonds could be sold as soon as this week, said Bradley finance director Rob Romo, and if all goes relatively close to the 20-year program laid out before the board by Romo and Andrew Kim, director of PMA Securities of Naperville, the village could realize a savings of $12 million over the course of 20 years.

The savings comes from the situation where Bradley is paying 6.75 percent on its unfunded portion of the pension debt. With this new plan to immediately bring the pension up to 100-percent funding, the village’s interest rate on the bonds being sold will fall to between 2.25 to 2.59 percent.

This is where the significant savings comes from, Romo said.

The ordinance approved Monday actually stated the village could purchase bonds up to $14.5 million, but Romo noted that level would not be reached. He also noted the bonds can only be used for the pension so additional could not be gained and used to purchase some other type of asset.

Some communities have public safety pension funds which are only at about 20 percent funding. As of 2020, Bradley was at 56.8 percent funding of its police pension.

According to the police pension fund’s latest figures, the fund had approximately $19.2 million of assets, when it should have had $33.9 million.

The administration explained to trustees that if the board moves in this direction, the village can pay $800,000 toward properly funding the pension for the current 33-member force and another $800,000 would go toward the first payment of the 20-year debt certificate. The pension has 27 retired officers or a spouse drawing a pension.

Romo said currently the village is paying a large amount toward finance fees regarding the outstanding debt so that money is basically being lost. This move, he said, allows the village to catch up on years of funding shortfalls.

Editor's Note: This story has been updated to clarify that the school board's figures were calculated based on an average salary of $50,000 per year, so its percentages do not reflect the precise increase all teachers would receive.

BOURBONNAIS — With Bourbonnais teachers on the brink of striking 11 months into contract negotiations, Superintendent Adam Ehrman has confirmed that any missed school days due to a strike would be made up during summer.

“Although I am hopeful that future negotiating sessions between the Board of Education and the BEA (Bourbonnais Education Association) will result in an agreement, the District must prepare for the possibility of a teacher strike,” Ehrman said in a letter to families last week.

Meanwhile, a second informational picket planned for Thursday has been moved to a virtual event due to ongoing freezing temperatures. Teachers first took to the streets to picket Jan. 26 when it was not quite as cold.

The next negotiation meeting between the BEA and Bourbonnais School Board is also scheduled for Thursday.

Contract offers released last week on the Illinois Educational Labor Relations Board website reveal that the BEA and school board are at odds over proposed salary increases over the next three years, among other points.

It should be noted that the board's figures were calculated based on an average salary of $50,000 per year, so the percentages do not reflect the precise increase all teachers would receive.

When he transitioned to the role, he did not take the place of former interim superintendent Margaret Longo at the negotiating table.

“When I joined the District, the Board of Education made decisions to ensure that my attention and energy was focused on providing a safe educational environment for our students and staff this year,” he explained in the letter.

“The Board of Education ensured that my focus of managing our return to learn plans was never hindered,” he continued. “The idea was to keep the two matters separate from each other.”

After initiating the public posting process with the labor board, the earliest teachers could legally go on strike is Feb. 19. A strike is not definitively scheduled for then, however; it is still only an option.

Ehrman said that in the event of a strike, schools would not be able to remain open while properly following COVID-19 safety protocols. Therefore, families would have to make alternative arrangements for their children.

For the virtual picket, the BEA is asking community members show their support by posting photos, videos or messages to Facebook tagged #BEAforstudents at 4:15 p.m. Thursday.

More information about the virtual picket, as well as the BEA’s disagreements with the school board’s current offer, can be found on the union’s website www.beaforstudents.org.