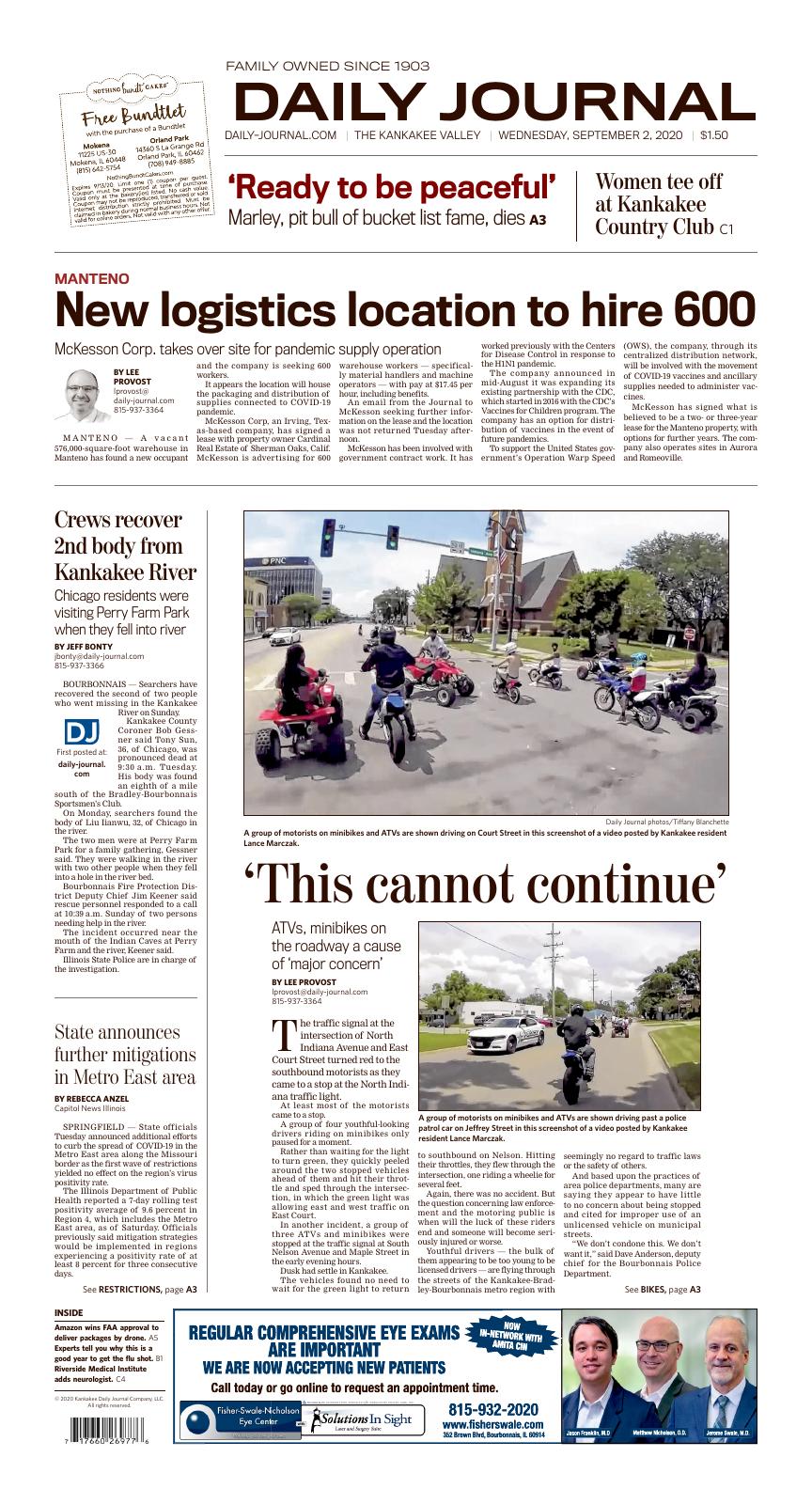 MANTENO — A vacant 576,000-square-foot warehouse in Manteno has found a new occupant and the company is seeking 600 workers.

It appears the location, 1125 Sycamore Road, will house the packaging and distribution of supplies connected to COVID-19 pandemic. The location had most recently been the home of XPO Logistics and DHL Supply. Both locations closed last fall.

McKesson Corp., an Irving, Texas-based company, has signed a lease with property owner Cardinal Real Estate of Sherman Oaks, Calif. McKesson is advertising for 600 warehouse workers — specifically material handlers and machine operators — with pay at $17.45 per hour, including benefits.

An email from the Journal to McKesson seeking further information on the lease and the location was not returned Tuesday afternoon.

McKesson has been involved with government contract work. It has worked previously with the Centers for Disease Control in response to the H1N1 pandemic.

The company announced in mid-August it was expanding its existing partnership with the CDC, which started in 2016 with the CDC’s Vaccines for Children program. The company has an option for distribution of vaccines in the event of future pandemics.

To support the United States government’s Operation Warp Speed (OWS), the company, through its centralized distribution network, will be involved with the movement of COVID-19 vaccines and ancillary supplies needed to administer vaccines.

McKesson has signed what is believed to be a two- or three-year lease for the Manteno property, with options for further years. The company also operates sites in Aurora and Romeoville.

A group of motorists on minibikes and ATVs are shown driving on Court Street in this screenshot of a video posted by Kankakee resident Lance Marczak.

A group of motorists on minibikes and ATVs are shown driving past a police patrol car on Jeffrey Street in this screenshot of a video posted by Kankakee resident Lance Marczak.

A group of motorists on minibikes and ATVs are shown driving on East Court Street in this screenshot of a video posted by Kankakee resident Lance Marczak. Ways to get these riders off the streets are being sought.

KANKAKEE — The traffic signal at the intersection of North Indiana Avenue and East Court Street turned red to the southbound motorists as they came to a stop at the North Indiana traffic light.

At least most of the motorists came to a stop.

A group of four youthful-looking drivers riding on minibikes only paused for a moment.

Rather than waiting for the light to turn green, they quickly peeled around the two stopped vehicles ahead of them and hit their throttle and sped through the intersection, in which the green light was allowing east and west traffic on East Court.

In another incident, a group of three ATVs and minibikes were stopped at the traffic signal at South Nelson Avenue and Maple Street in the early evening hours.

Dusk had settle in Kankakee.

The vehicles found no need to wait for the green light to return to southbound on Nelson. Hitting their throttles, they flew through the intersection, one riding a wheelie for several feet.

Again, there was no accident. But the question concerning law enforcement and the motoring public is when will the luck of these riders end and someone will become seriously injured or worse.

Youthful drivers — the bulk of them appearing to be too young to be licensed drivers — are flying through the streets of the Kankakee-Bradley-Bourbonnais metro region with seemingly no regard to traffic laws or the safety of others.

And based upon the practices of area police departments, many are saying they appear to have little to no concern about being stopped and cited for improper use of an unlicensed vehicle on municipal streets.

“We don’t condone this. We don’t want it,” said Dave Anderson, deputy chief for the Bourbonnais Police Department.

NOT A NEW PROBLEM

The issue of unlicensed drivers and unlicensed vehicles ripping through Kankakee’s streets has been taking place for more than two years. Some Kankakee City Council members have sought solutions from the administration, but none have been brought forth to date.

Police are trying to err on the side of caution. They do not want officers to chase these drivers out of fear that someone could be seriously hurt or killed.

But the situation is quickly evolving. There are many more of these unlicensed vehicles on the streets, ripping through stopped traffic and disregarding traffic laws.

Mayor Chasity Wells-Armstrong noted if he had any ideas as to how to deal with this matter, the city was all ears. She suggested Osenga meet with the police administration.

“Enforce the laws that are on the books. Most of these vehicle are unlicensed by the state, have no lights, no turn signals and no valid ID. We don’t need new ordinances, just enforce the ones on the books,” he said.

But it appears that a new law is being drafted.

Kankakee Police Chief Frank Kosman said the council’s Public Safety Committee will consider a law which would require registration and insurance; establish a fine schedule beginning at $250; include language to seize vehicles; and not allow the sale of gas to these type of vehicle, other than those being transported on a trailer.

Kosman noted the vehicles are already not allowed on public streets.

He noted no law is 100 percent foolproof, but acknowledged something must be done before tragedy unfolds.

“This is not a situation unique to our city or our region. This is an issue across the country. We are not taking this lightly. ... This is a growing problem,” he said.

Anderson said about two years ago, these drivers were mainly concentrated in Kankakee. That is no longer the case. He said these operators have been seen in Bourbonnais as well.

Anderson said he has concern for not only the drivers of the minibikes, but drivers of cars and trucks.

“I’m definitely concerned about the innocent victim. What would this do to the person who hits one of these bikes? Where is the rider responsibility for obeying the law?” he asked. “... This is a major concern and I wish it wasn’t happening. This cannot continue.”

Anderson said these youthful drivers are becoming bolder, not only in terms of the way they drive, but where they drive.

“If they do it long enough, their time will come,” he said.

Bradley Police Chief Don Barber, like other departments, instructs his officers not to chase the vehicles. But, he said, they can follow them to learn where the operator lives and tickets can be written there. Barber said he would like to be able to sit down with these operators and their parents as well.

“This is definitely a dangerous situation. If we can somehow educate them. But how do we come to a happy medium on this?”

Emergency personnel recover the body of one victim from the Kankakee River.

BOURBONNAIS — Searchers have recovered the second of two people who went missing in the Kankakee River on Sunday.

Kankakee County Coroner Bob Gessner said Tony Sun, 36, of Chicago, was pronounced dead at 9:30 a.m. Tuesday. His body was found an eighth of a mile south of the Bradley-Bourbonnais Sportsmen’s Club.

On Monday, searchers found the body of Liu Iianwu, 32, of Chicago in the river.

The two men were at Perry Farm Park for a family gathering, Gessner said. They were walking in the river with two other people when they fell into a hole in the river bed.

The incident occurred near the mouth of the Indian Caves at Perry Farm and the river, Keener said.

Illinois State Police are in charge of the investigation.

SPRINGFIELD — State officials Tuesday announced additional efforts to curb the spread of COVID-19 in the Metro East area along the Missouri border as the first wave of restrictions yielded no effect on the region’s virus positivity rate.

The Illinois Department of Public Health reported a 7-day rolling test positivity average of 9.6 percent in Region 4, which includes the Metro East area, as of Saturday. Officials previously said mitigation strategies would be implemented in regions experiencing a positivity rate of at least 8 percent for three consecutive days.

Residents in the Metro East area, as of Wednesday, will be unable to consume food or alcohol inside a restaurant or bar. All such establishments must close at 11 p.m. daily and reopen after 6 a.m., and residents are prohibited from congregating indoors for any reason.

Social gatherings will be limited to the lesser of 25 guests or one quarter of a room’s capacity. Party buses will be banned from operating and visitation to long-term care facilities will continue to be forbidden.

The initial restrictions took effect two weeks ago, but the virus positivity has only increased since they were implemented. Gov. JB Pritzker has called it a “mistake” that he did not implement the stricter bar and restaurant restrictions earlier.

According to a news release, public health officials will monitor the region’s positivity rate. If that rate drops to 6.5 percent or lower over the next two weeks, residents can observe the state’s Phase 4 guidance. If the positivity rate increases or remains stagnant over the same time period, officials will consider “more stringent mitigations.”

“IDPH has been working closely with local health departments in the Metro East to provide education to the public and offer information to businesses and organizations on safer ways to reopen,” according to the announcement. “...The significance of face coverings, social distancing, and hand washing have been continuously emphasized by the administration throughout the COVID-19 pandemic.”

The new mitigations are on par with those imposed for Region 7 last week, which includes Will and Kankakee Counties.{span class=”print_trim”} 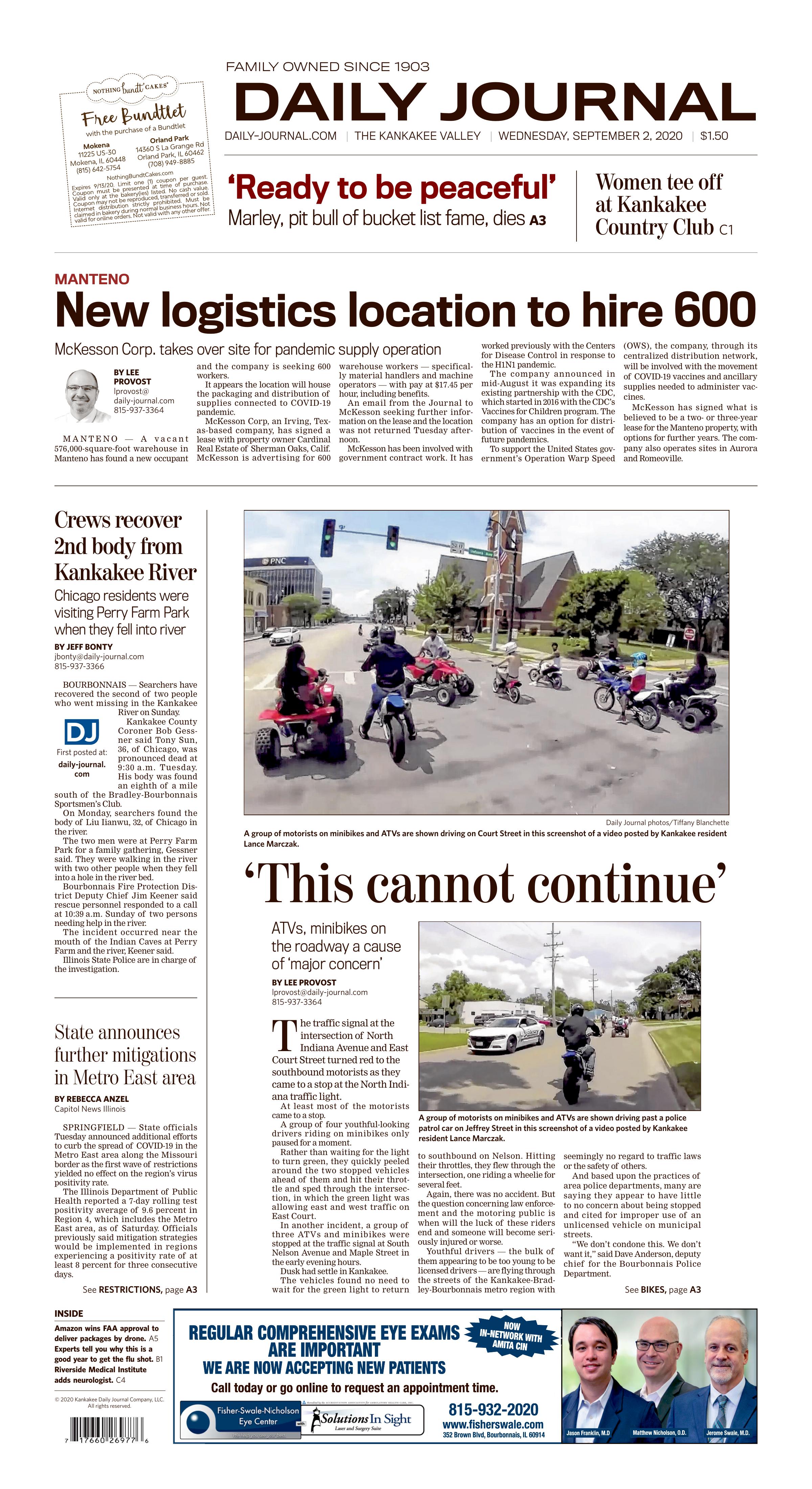