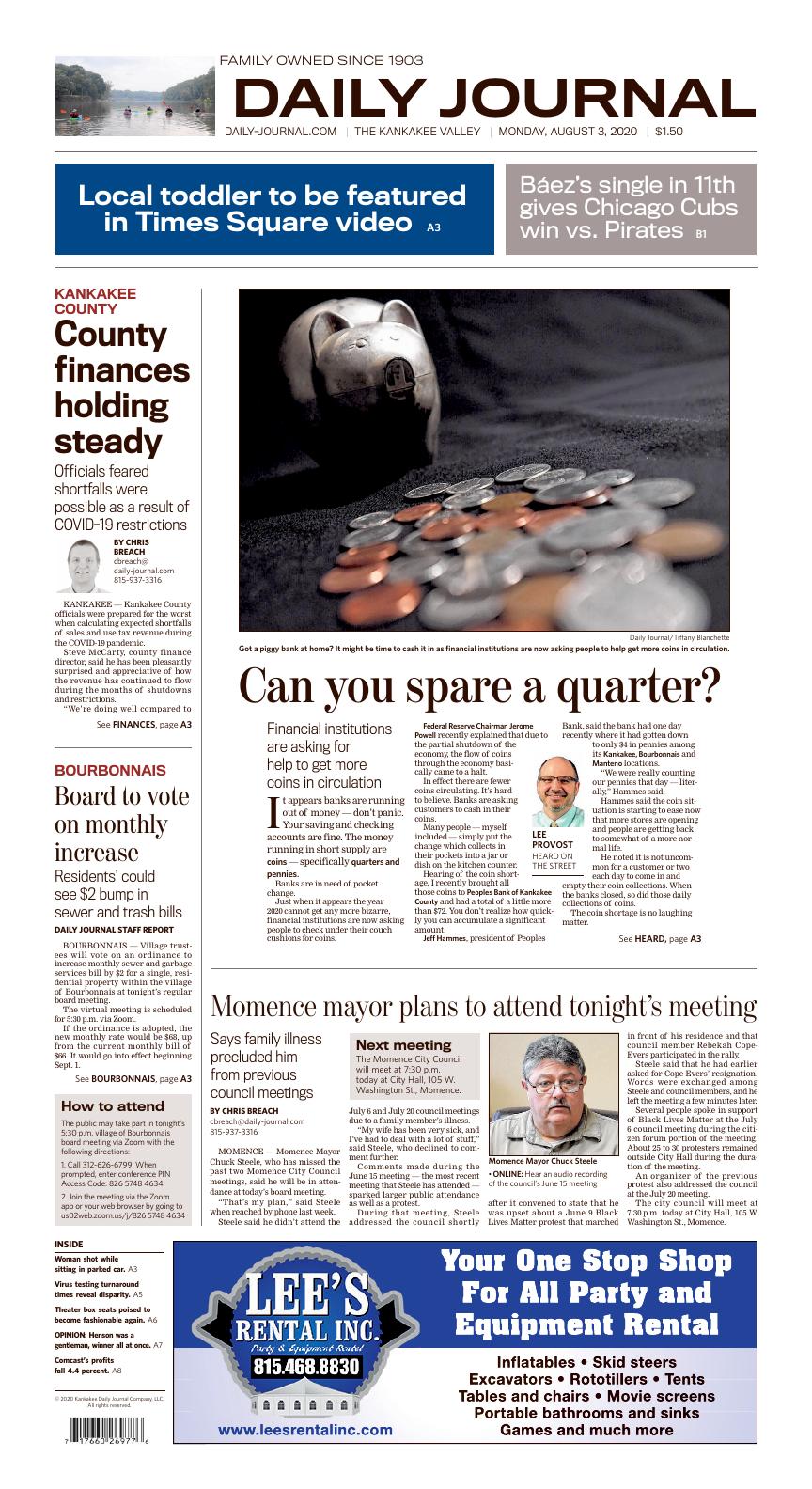 Got a piggy bank at home? It might be time to cash it in as financial institutions are now asking people to help get more coins in circulation.

It appears banks are running out of money — don’t panic. Your saving and checking accounts are fine. The money running in short supply are coins — specifically quarters and pennies.

Banks are in need of pocket change.

Just when it appears the year 2020 cannot get any more bizarre, financial institutions are now asking people to check under their couch cushions for coins.

Federal Reserve Chairman Jerome Powell recently explained that due to the partial shutdown of the economy, the flow of coins through the economy basically came to a halt.

In effect there are fewer coins circulating. It’s hard to believe. Banks are asking customers to cash in their coins.

Many people — myself included — simply put the change which collects in their pockets into a jar or dish on the kitchen counter.

Hearing of the coin shortage, I recently brought all those coins to Peoples Bank of Kankakee County and had a total of a little more than $72. You don’t realize how quickly you can accumulate a significant amount.

Jeff Hammes, president of Peoples Bank, said the bank had one day recently where it had gotten down to only $4 in pennies among its Kankakee, Bourbonnais and Manteno locations.

“We were really counting our pennies that day — literally,” Hammes said.

Hammes said the coin situation is starting to ease now that more stores are opening and people are getting back to somewhat of a more normal life.

He noted it is not uncommon for a customer or two each day to come in and empty their coin collections. When the banks closed, so did those daily collections of coins.

The coin shortage is no laughing matter.

The Federal Reserve created a U.S. Coin Task Force to address the disruptions to normal coin circulation. The task force is expected to bring forth recommendations on this matter soon.

Here’s a suggestion. Now would be a good time to bring in those stashes of coins to help out the economy, the banks and the retailers. If nothing else it will put some cash in your pocket.

Cash is easier to carry.

While much attention is paid to manufacturing, retail and commercial business within Kankakee County, it is easy to forget the importance of agriculture.

And make no mistake about it: Agriculture remains a chief driver of our economy. Nearly 3 out of every 4 acres within Kankakee County is devoted to agriculture.

Which brings me to this business item. Crops — most notably soybeans and corn — are looking quite good as July is now in our rear-view mirror.

“There were a couple weeks there in early July where you could almost hear the corn growing because it shot up so fast,” said Chad Miller, Kankakee County Farm Bureau manager.

As he keeps in contact with area farmers throughout the year, Miller said the reports he’s been receiving from ag professionals is that soybeans are looking good at this point, but timely rains are still needed to get them to the finish line.

Basically, if the weather does not turn negative and if an early frost can be avoided, yields this September and October should be quite good.

“We are still heavily reliant on Mother Nature,” he said.

Miller noted the local wheat crop, which is small here, produced yields he described as below average.

Farmers are in need of strong yields because commodity prices are lagging. Currently, soybeans are in the high $8 per bushel range which corn is hovering in the low $3 a bushel range.

Miller is hoping increasing grain purchases from China can help boost per-bushel prices. Time will be the judge of that, however.

“We are certainly hopeful China follows through on their farm product purchases,” he said.

MOMENCE — Momence Mayor Chuck Steele, who has missed the past two Momence City Council meetings, said he will be in attendance at today’s board meeting.

Steele said he didn’t attend the July 6 and July 20 council meetings due to a family member’s illness.

“My wife has been very sick, and I’ve had to deal with a lot of stuff,” said Steele, who declined to comment further.

Comments made during the June 15 meeting — the most recent meeting that Steele has attended — sparked larger public attendance as well as a protest.

During that meeting, Steele addressed the council shortly after it convened to state that he was upset about a June 9 Black Lives Matter protest that marched in front of his residence and that council member Rebekah Cope-Evers participated in the rally.

Steele said that he had earlier asked for Cope-Evers’ resignation. Words were exchanged among Steele and council members, and he left the meeting a few minutes later.

An organizer of the previous protest also addressed the council at the July 20 meeting.

The Daily Journal filed a FOIA request to obtain an audio recording of the Momence City Council meeting on June 15, 2020. Note to readers: Ex…

KANKAKEE — Kankakee County officials were prepared for the worst when calculating expected shortfalls of sales and use tax revenue during the COVID-19 pandemic.

Steve McCarty, county finance director, said he has been pleasantly surprised and appreciative of how the revenue has continued to flow during the months of shutdowns and restrictions.

In addition, the money the county has on hand to pay its bills has been steady.

“Overall right now, cash flow is in a good position,” McCarty said. “… The impact of the change that happens in the fiscal year usually shows up for us in the spring. Right now it looks like there are no problems.

“We have $7.5 million in the bank,” he said. “It does feel nice paying bills right now. We don’t have to sweat it out trying to figure out who, when and how. We also have to keep in mind the drought, if you will, always shows up in the springtime months, so we’re also watching that very closely as far as trends and how it will show up. It’s pretty straight forward right now.”

County Treasurer Nick Africano also reported that property tax bill collections have been strong. The amount of money collected so far is just .64 percent less than 2019.

“We haven’t seen any change as a result of COVID in terms of collection,” Africano said. “The Sept. 3 [installment] will be a telltale, but this is very good news. The first installment looks like all other first installments. … It speaks to taxpayers in this county, and I’m sure it’s not easy ever, but this year was even more difficult. To see it identical is a great thing. It keeps the county on track.”

BOURBONNAIS — Village trustees will vote on an ordinance to increase monthly sewer and garbage services bill by $2 for a single, residential property within the village of Bourbonnais at tonight’s regular board meeting.

The virtual meeting is scheduled for 5:30 p.m. via Zoom.

If the ordinance is adopted, the new monthly rate would be $68, up from the current monthly bill of $66. It would go into effect beginning Sept. 1.

The last rate increase was implemented in August 2019.

At the village’s July 1 utility committee meeting, trustees approved moving forward with a vote on the increase as a means to help cover the growing expenses of the two services.

“Unfortunately, we don’t drive these costs,” Mayor Paul Schore said in a press release. “For convenience, the village provides one monthly bill to residents and businesses; however, it is a pass-through of costs that we are billed from [Kankakee River Metropolitan Agency] for wastewater treatment and Republic Services for garbage and waste removal services.”

The proposed monthly $1.25 refuse rate increase would alter the village residential rate to $26 from $24.75. This is a result of increased fees and contractual rates from refuse contractor, Republic Services in the amount of $6,250 per month, or $75,000 for the year. The current village contract with Republic Services ends in April 2021.

“Costs continue to rise,” Finance Director Tara Latz said. “The village has very limited options other than passing these costs to the consumers.

“We are cognizant of the challenges everyone faces today, and we are only trying to ensure that the adjustments we make are absolutely necessary. This also reinforces the notion that a fairer approach to utility billing is something to be discussed.”

Also at the July 1 utility committee meeting, trustees agreed to have Latz work on changing the way residential customers are billed.

Residents are currently billed a flat rate regardless of usage. The village is working to move to a volumetric system, which will be a more fair rate based upon usage. Commercial sewer fees are based on a three-month average from Aqua Illinois.

“I’ve been a proponent of this for many, many years,” Schore said during that meeting. “We need to make this fair.”

The public may take part in tonight's 5:30 p.m. Village of Bourbonnais board meeting via Zoom with the following directions: 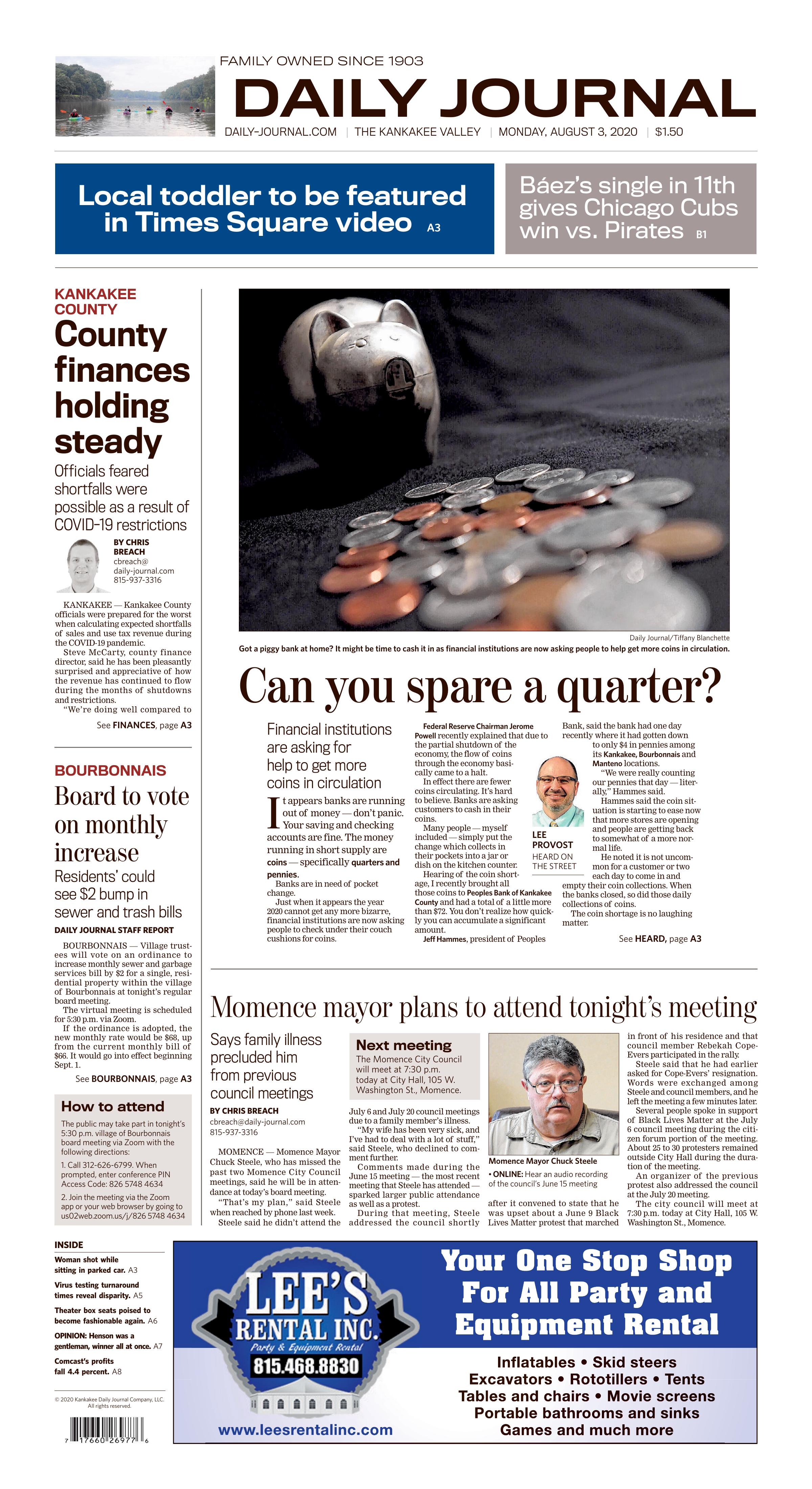