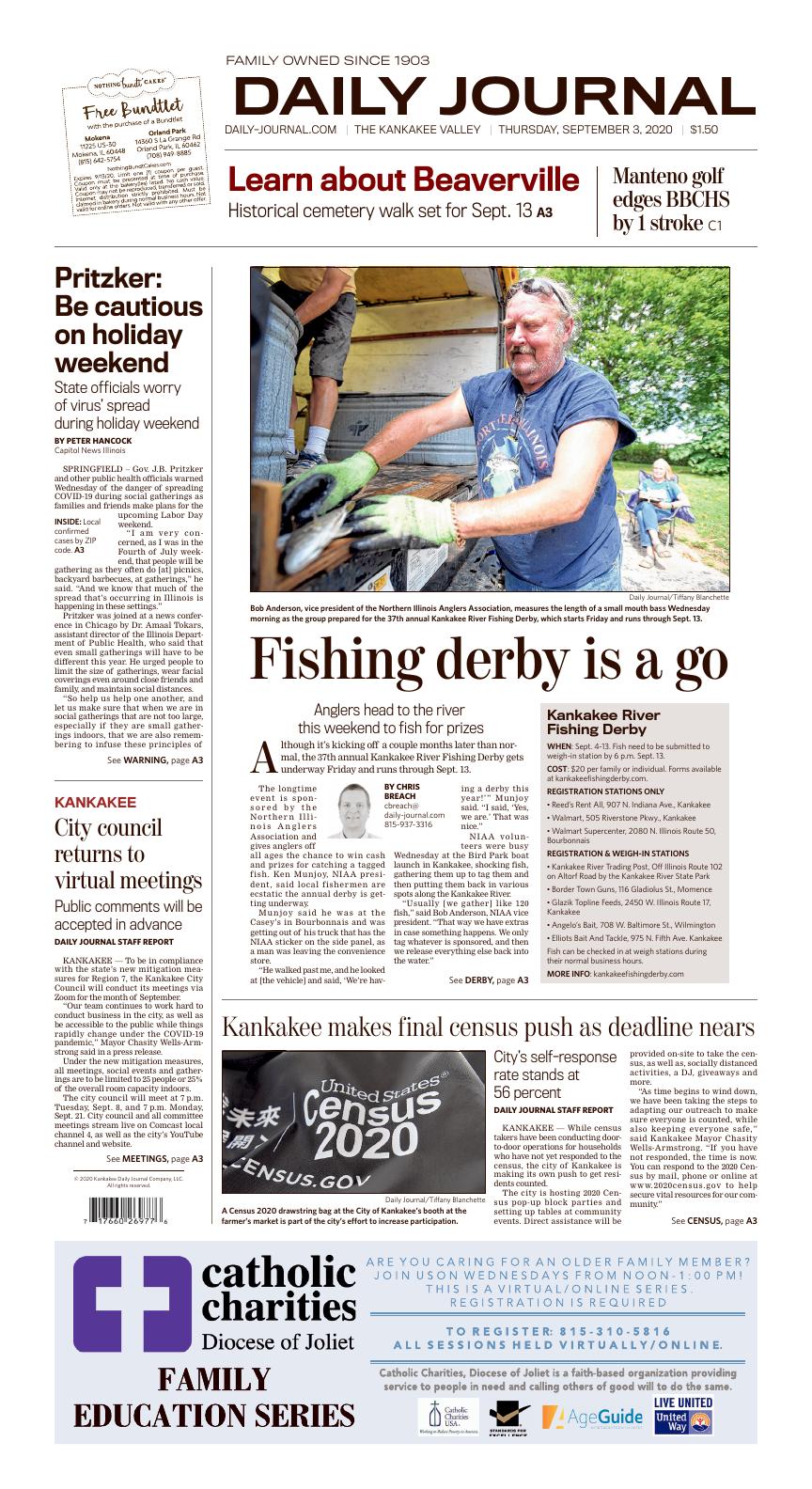 Although it’s kicking off a couple months later than normal, the 37th annual Kankakee River Fishing Derby gets underway Friday and runs through Sept. 13.

The longtime event is sponsored by the Northern Illinois Anglers Association and gives anglers off all ages the chance to win cash and prizes for catching a tagged fish. Ken Munjoy, NIAA president, said local fishermen are ecstatic the annual derby is getting underway.

Munjoy said he was at the Casey’s in Bourbonnais and was getting out of his truck that has the NIAA sticker on the side panel, as a man was leaving the convenience store.

NIAA volunteers were busy Wednesday at the Bird Park boat launch in Kankakee, shocking fish, gathering them up to tag them and then putting them back in various spots along the Kankakee River.

“Usually [we gather] like 120 fish,” said Bob Anderson, NIAA vice president. “That way we have extras in case something happens. We only tag whatever is sponsored, and then we release everything else back into the water.”

The derby is usually held in June, but the Illinois Department of Natural Resources’ shocking boat wasn’t available due to COVID-19 shutdown, so the derby was postponed.

“We had to wait until [the IDNR] could confirm that they could come help us,” Munjoy said. “Once they said they could be here today, we put all the wheels in motion and got it launched.”

Approximately 93 fish are tagged that have been sponsored for cash or prizes. Ten of those tagged fish are placed in the Bird Park quarry where youths can win $100 for catching a tagged fish. The rest of the tagged fish are put back in the Kankakee River.

“All the way from the Indiana state line to the Wilmington dam,” Anderson said.

Registration has been underway for the past couple weeks, and the NIAA is expecting a robust turnout.

“We picked some up [registration forms] from the bait shops, but there are still a bunch of them out there that we haven’t brought in yet,” Munjoy said. “In a normal year we’ll get somewhere in the neighborhood of 350 or so registration forms, and it looks like we average about two and half people per form. Most years we’re pushing 800 to 1,000 registrants.”

The water level is somewhat low due to the lack of rain and if the weather cooperates, area anglers will drop their lines to catch some tagged fish. Fishing is one activity people of all ages can do this year.

“I know that fishing has been really, really popular this year,” Munjoy said. “If you go into any store that sells fishing gear, they’re pretty much sold out. People on the river and other fisheries will tell you there are a lot of people out there catching a lot of fish. I think it’s been a real popular year for fishing, and I would expect that to carry on through this month.”

Kankakee River Fishing Derby registration forms are available online to be printed at kankakeefishingderby.com and at various registration and weigh-in stations across the area. Those location are listed online as well. The cost is $20 per family.

“Fishing patterns are going to be a little bit different,” Munjoy said. “It’s an early fall pattern instead of a late spring, early summer pattern. We’re already seeing more channel cat and flatheads being shocked up than what we normally see. That’s good for people who like to fish for those. .. I would expect on the big board this year we’re going to see some monsters in the flathead and channel cat categories.”

COST: $20 per family or individual. Forms available at kankakeefishingderby.com.

Fish can be checked in at weigh stations during their normal business hours.

A Census 2020 drawstring bag at the City of Kankakee’s booth at the farmer’s market is part of the city’s effort to increase participation.

KANKAKEE — While census takers have been conducting door-to-door operations for households who have not yet responded to the census, the city of Kankakee is making its own push to get residents counted.

The city is hosting 2020 Census pop-up block parties and setting up tables at community events. Direct assistance will be provided on-site to take the census, as well as, socially distanced activities, a DJ, giveaways and more.

“As time begins to wind down, we have been taking the steps to adapting our outreach to make sure everyone is counted, while also keeping everyone safe,” said Kankakee Mayor Chasity Wells-Armstrong. “If you have not responded, the time is now. You can respond to the 2020 Census by mail, phone or online at www.2020census.gov to help secure vital resources for our community.”

The city has seen a slight increase in numbers from 55% last month to currently showing a 56% self-response rate.

The U.S. Census Bureau has shortened the response to the 2020 Census, with all responses to be completed by Sept. 30. The original self-response period was scheduled to end by Oct. 31, but was modified due to the COVID-19 pandemic.

Residents of Kankakee may get direct assistance in responding to the 2020 Census at the following events:

SPRINGFIELD – Gov. J.B. Pritzker and other public health officials warned Wednesday of the danger of spreading COVID-19 during social gatherings as families and friends make plans for the upcoming Labor Day weekend.

“I am very concerned, as I was in the Fourth of July weekend, that people will be gathering as they often do [at] picnics, backyard barbecues, at gatherings,” he said. “And we know that much of the spread that’s occurring in Illinois is happening in these settings.”

Pritzker was joined at a news conference in Chicago by Dr. Amaal Tokars, assistant director of the Illinois Department of Public Health, who said that even small gatherings will have to be different this year. He urged people to limit the size of gatherings, wear facial coverings even around close friends and family, and maintain social distances.

“So help us help one another, and let us make sure that when we are in social gatherings that are not too large, especially if they are small gatherings indoors, that we are also remembering to infuse these principles of hand-washing, masking up and social distancing,” she said.

Those pleas came as IDPH reported 2,128 new confirmed cases of COVID-19 in Illinois and 27 virus-related deaths over the previous 24 hours. That brought the statewide totals since the pandemic first appeared in Illinois to 238,643 cases, including 8,091 deaths.

Those new cases came out of 32,751 tests that were reported over the 24-hour period, a smaller daily number than the state had been reporting in recent weeks, which Tokars attributed to a technical issue in the data processing system that IDPH uses to report numbers publicly. But she said all people who have been tested are being notified of their results.

The relatively small number of tests and the large number of positive results made for a single-day test positivity rate of 6.5 percent. That brought the preliminary, rolling average positivity rate up by two-tenths of a point to 4.5 percent for the seven-day period from Aug. 26 through Sept. 1.

Pritzker noted that the only regions that have seen an actual decrease in their test positivity rates are Region 3, which stretches from Quincy to Springfield in west-central Illinois, and Region 6 in east-central Illinois, which includes Effingham and the Champaign-Urbana area.

At the end of Tuesday, there were 1,596 people reported hospitalized with COVID-19 in Illinois, including 347 in intensive care units and 142 on ventilators. All of those numbers remain slightly above pandemic lows.{span class=”print_trim”}

KANKAKEE — To be in compliance with the state’s new mitigation measures for Region 7, the Kankakee City Council will conduct its meetings via Zoom for the month of September.

“Our team continues to work hard to conduct business in the city, as well as be accessible to the public while things rapidly change under the COVID-19 pandemic,” Mayor Chasity Wells-Armstrong said in a press release.

Under the new mitigation measures, all meetings, social events and gatherings are to be limited to 25 people or 25% of the overall room capacity indoors.

The city council will meet at 7 p.m. Tuesday, Sept. 8, and 7 p.m. Monday, Sept. 21. City council and all committee meetings stream live on Comcast local channel 4, as well as the city’s YouTube channel and website.

“Most municipalities only provide a single platform to view public meetings. We provide multiple platforms for accessibility and transparency,” Wells-Armstrong said. “The City of Kankakee will continue to follow all public health updates to be in compliance and adjust accordingly.”

The meetings will be closed for attendance. Public comments can be submitted until 3 p.m. the day of the meeting. To make a comment, email publiccomment@citykankakee-il.gov. 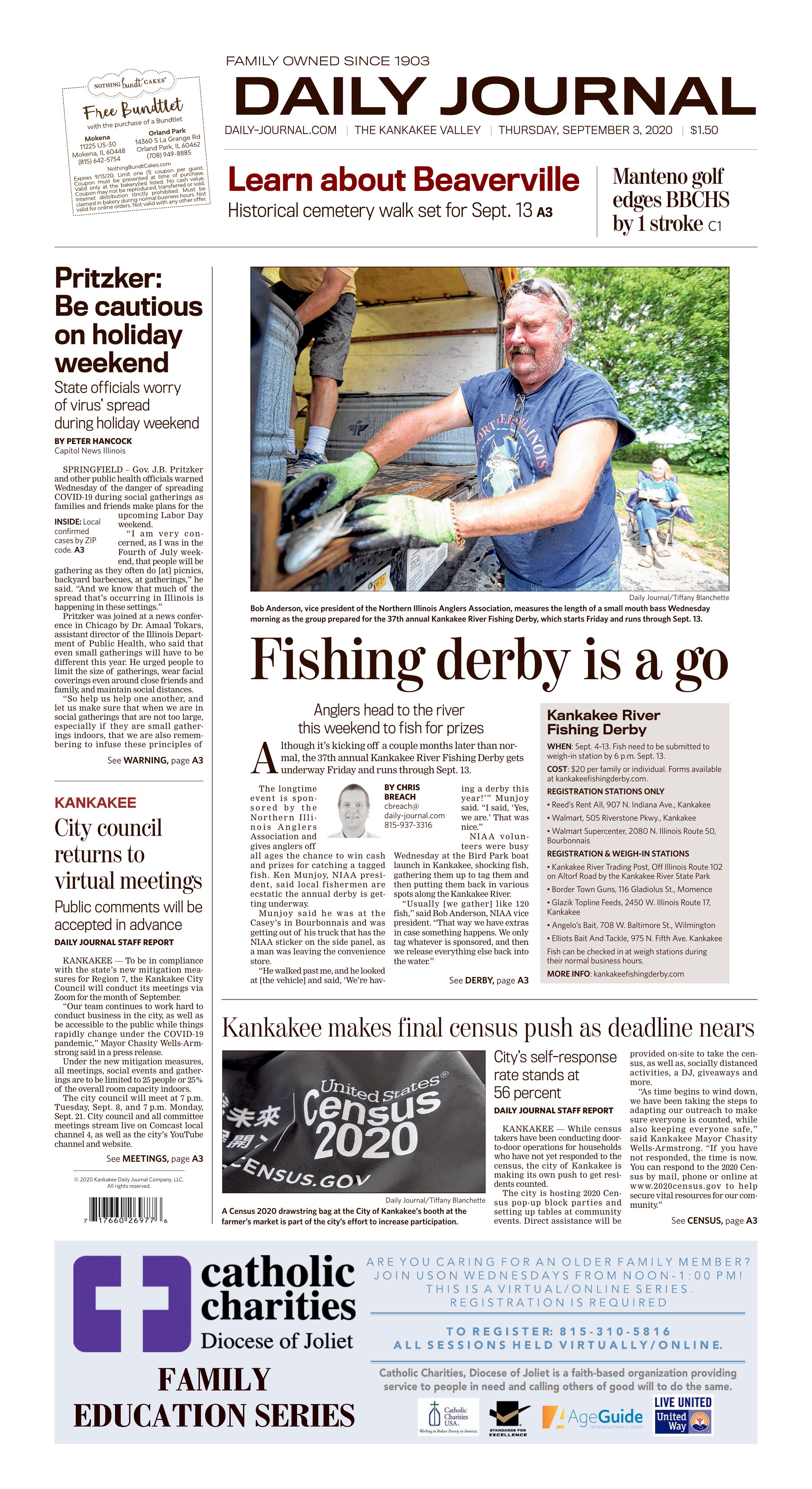