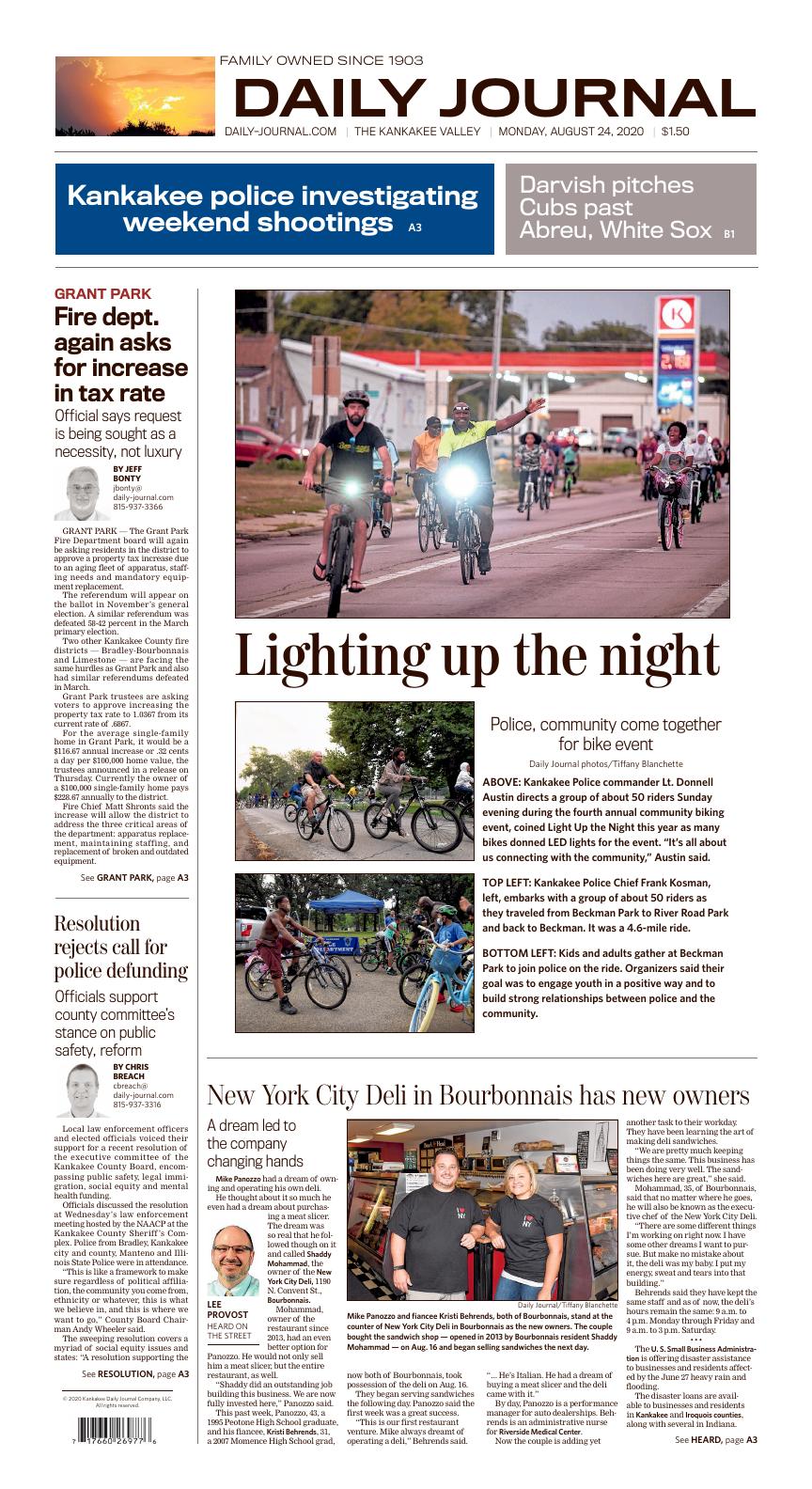 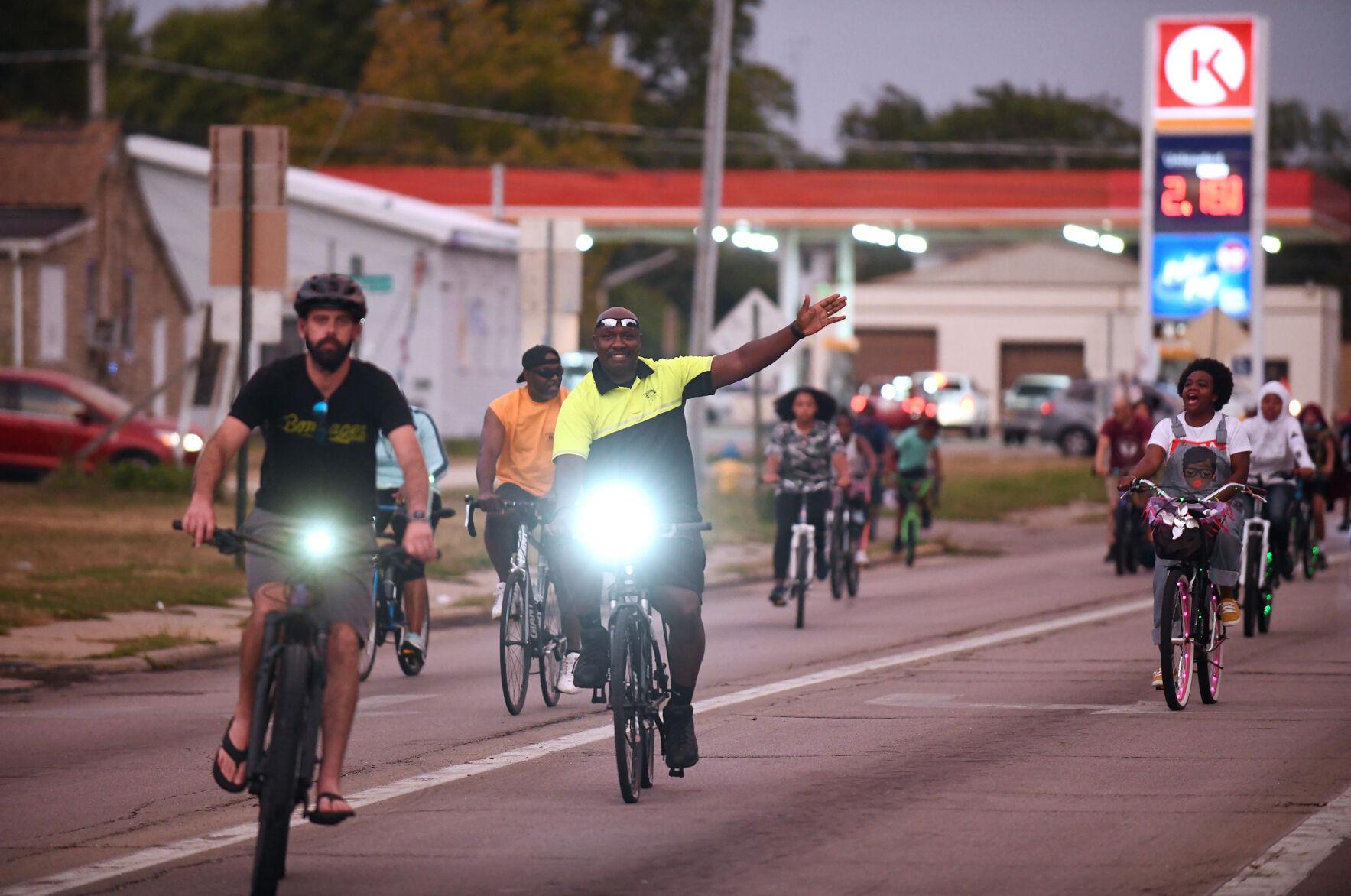 Kankakee Police commander Lt. Donnell Austin directs a group of about 50 riders Sunday evening during the fourth annual community biking event, coined Light Up the Night this year as many bikes donned LED lights for the event. “It’s all about us connecting with the community,” Austin said. 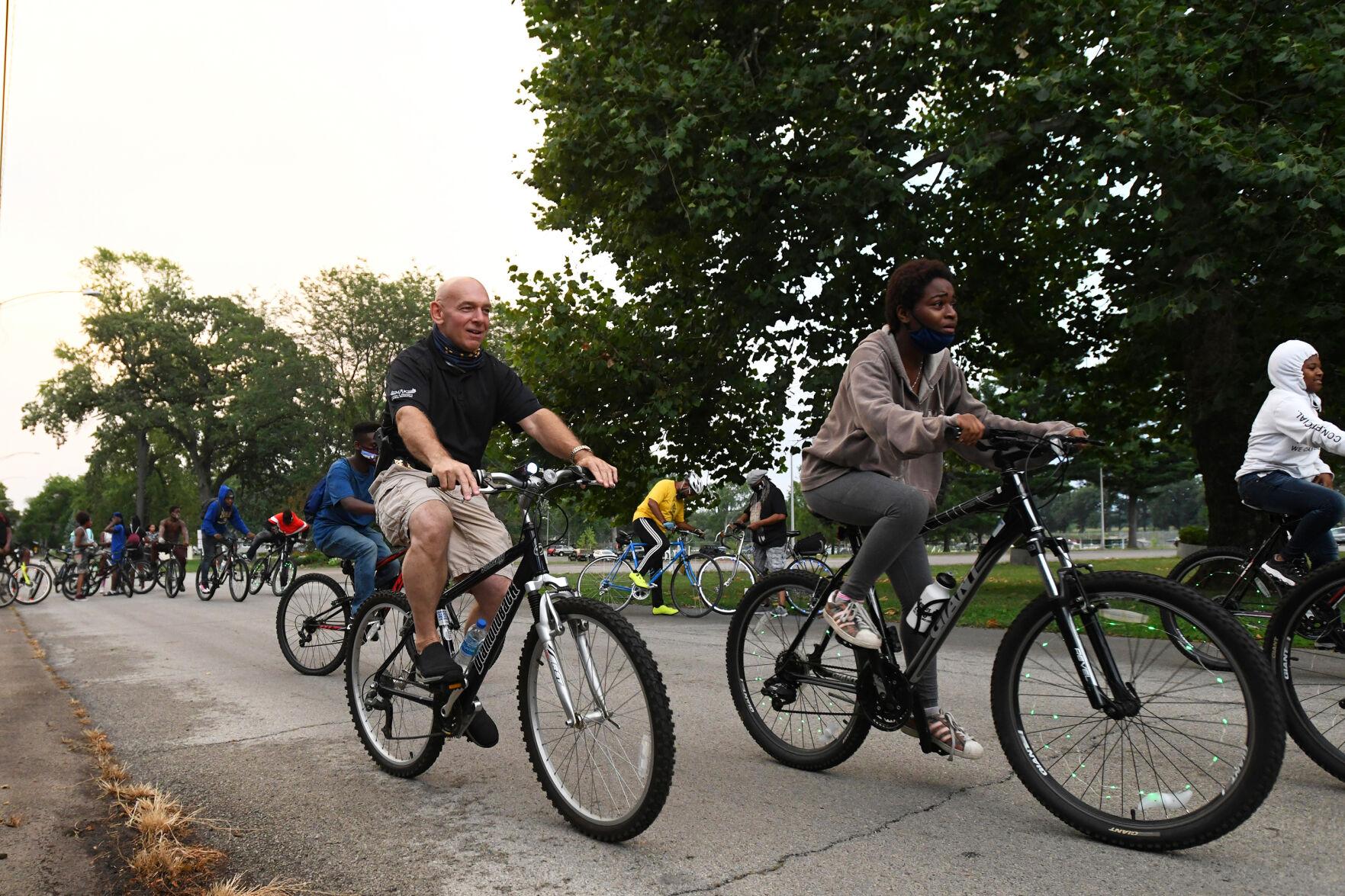 Kankakee Police Chief Frank Kosman, left, embarks with a group of about 50 riders Sunday evening on the fourth annual community biking event, coined Light Up the Night this year as many bikes donned LED lights for the event at Beckman Park. 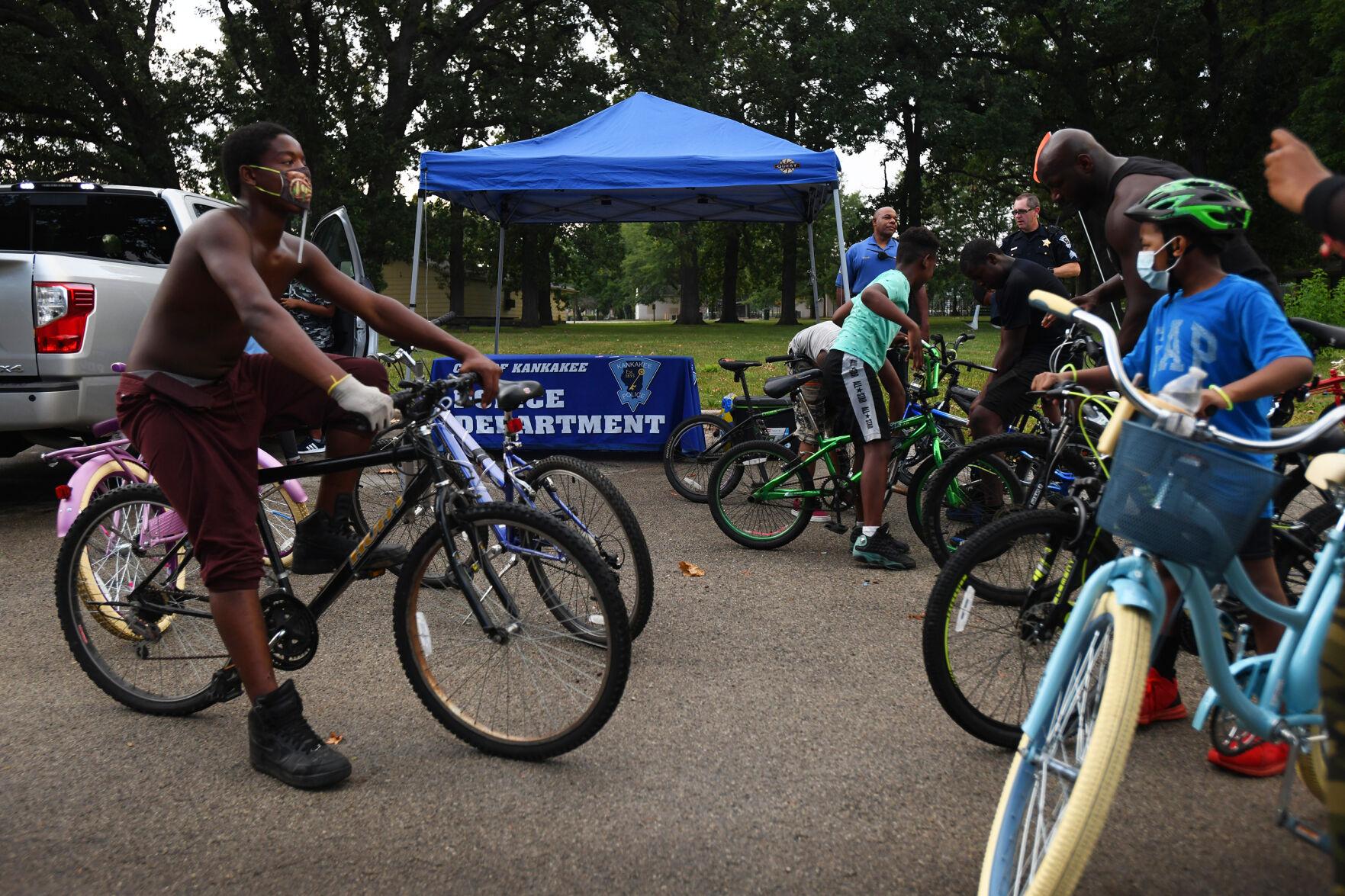 About 50 kids and adults gathered at Beckman Park with police on Sunday evening for the fourth annual community biking event, coined Light Up the Night this year as many bikes donned LED lights for the cruise.

Mike Panozzo and fiancee Kristi Behrends, both of Bourbonnais, stand at the counter of New York City Deli in Bourbonnais as the new owners. The couple bought the sandwich shop — opened in 2013 by Bourbonnais resident Shaddy Mohammad — on Aug. 16 and began selling sandwiches the next day.

Mike Panozzo had a dream of owning and operating his own deli.

He thought about it so much he even had a dream about purchasing a meat slicer. The dream was so real that he followed though on it and called Shaddy Mohammad, the owner of the New York City Deli, 1190 N. Convent St., Bourbonnais.

Mohammad, owner of the restaurant since 2013, had an even better option for Panozzo. He would not only sell him a meat slicer, but the entire restaurant, as well.

“Shaddy did an outstanding job building this business. We are now fully invested here,” Panozzo said.

This past week, Panozzo, 43, a 1995 Peotone High School graduate, and his fiancee, Kristi Behrends, 31, a 2007 Momence High School grad, now both of Bourbonnais, took possession of the deli on Aug. 16.

They began serving sandwiches the following day. Panozzo said the first week was a great success.

“This is our first restaurant venture. Mike always dreamt of operating a deli,” Behrends said. “... He’s Italian. He had a dream of buying a meat slicer and the deli came with it.”

By day, Panozzo is a performance manager for auto dealerships. Behrends is an administrative nurse for Riverside Medical Center.

Now the couple is adding yet another task to their workday. They have been learning the art of making deli sandwiches.

“We are pretty much keeping things the same. This business has been doing very well. The sandwiches here are great,” she said.

Mohammad, 35, of Bourbonnais, said that no matter where he goes, he will also be known as the executive chef of the New York City Deli.

“There are some different things I’m working on right now. I have some other dreams I want to pursue. But make no mistake about it, the deli was my baby. I put my energy, sweat and tears into that building.”

Behrends said they have kept the same staff and as of now, the deli’s hours remain the same: 9 a.m. to 4 p.m. Monday through Friday and 9 a.m. to 3 p.m. Saturday.

The U. S. Small Business Administration is offering disaster assistance to businesses and residents affected by the June 27 heavy rain and flooding.

The disaster loans are available to businesses and residents in Kankakee and Iroquois counties, along with several in Indiana. Applications must be filed for physical damage by Oct. 13, 2020. Applications for economic injury need to be filed by May 11, 2021.

In addition, a July 15 resulted in a disaster declaration for several counties, including Livingston County.

To be eligible for the SBA declaration, at least 25 homes and/or businesses in a county must have sustained major, uninsured losses of 40 percent or more. The deadline of the Livingston flood is Oct. 19 for physical damage and May 19 for economic injury.

Grant Park Fire Department’s new fire chief Matt Shronts, left, stands with his father, retired Grant Park Fire Chief Rich Shronts, in the firehouse Thursday. Matt, a firefighter for 19 years stepped into the role after his dad’s retirement after 51 years of service, with 36 as chief.

GRANT PARK — The Grant Park Fire Department board will again be asking residents in the district to approve a property tax increase due to an aging fleet of apparatus, staffing needs and mandatory equipment replacement.

The referendum will appear on the ballot in November’s general election. A similar referendum was defeated 58-42 percent in the March primary election.

Two other Kankakee County fire districts — Bradley-Bourbonnais and Limestone — are facing the same hurdles as Grant Park and also had similar referendums defeated in March.

Grant Park trustees are asking voters to approve increasing the property tax rate to 1.0367 from its current rate of .6867.

Fire Chief Matt Shronts said the increase will allow the district to address the three critical areas of the department: apparatus replacement, maintaining staffing, and replacement of broken and outdated equipment.

The department’s 30-year-old engine returned recently after being out of service for two months for “major, major, expensive” repairs, Shront told the Daily Journal on Thursday.

In the past three years, Shronts said maintenance costs have become a bigger issue. On top of that, the department must replace all its air packings at a cost of $150,000.

Shronts said Grant Park has been able to secure grant money to replace some equipment. The average age of the department’s fleet is 27 years.

“Things are critical,” Shronts added. “Both of our ambulances were out of service the same day.”

Staffing would also take a hit without the increased funding, Shronts said.

Shronts said failure of the ballot measure passing would mean the station would not be staffed for several hours daily. Currently, two people staff the station around the clock.

“We’re doing the things to keep open and running on the streets,” he said.

Shronts said he and the trustees understand these are tough and unique times with the COVD-19 pandemic.

“This [decision] was a challenge and tough call, but at the end of the day, it was an easy one to make,” Shronts said. “COVID challenges us all, and it is as challenging as a first responder.

“We are not coming to the taxpayers and asking for this increase as a luxury but as a necessity. Our needs are still there. The facts are the facts.”

If voters defeat the referendum in November, Shronts said the district will keep placing it on the ballot until it passes.

Officials discussed the resolution at Wednesday’s law enforcement meeting hosted by the NAACP at the Kankakee County Sheriff’s Complex. Police from Bradley, Kankakee city and county, Manteno and Illinois State Police were in attendance.

“This is like a framework to make sure regardless of political affiliation, the community you come from, ethnicity or whatever, this is what we believe in, and this is where we want to go,” County Board Chairman Andy Wheeler said.

The sweeping resolution covers a myriad of social equity issues and states: “A resolution supporting the full funding of Kankakee County public safety departments, supporting legal immigration, reaffirming our commitment to social equity, increased mental health funding, and a policy of the Kankakee County Board to support national immigration reform.”

Wheeler said the directive placed on him by the executive committee was to have a resolution that rejected the defunding police movement that’s been debated across the country.

“It spoke to some of the other social equity things and really everything that had to do with the defund situation and also supporting ICE,” he said. “There was a very broad scope and when I wrote this, I had a consultation with the sheriff [Mike Downey], Mr. [Steven] Hunter [board member] and others, there’s so much wrapped into that. ... We had to go a lot broader than that, kind of tie in everything that the county has done with affirmative action, with the 10 Shared Principles, everything that we have done as a county, but also put down what we believe in and what we want to work toward as a governmental unit.”

Hunter said the resolution that was unanimously adopted at the Kankakee County Board meeting on Aug. 11.

“There were many positive comments made [at the county board meeting] much to my surprise, regarding the adoption of this particular document,” said Hunter at the law enforcement meeting.

The three-page resolution also addressed several topics mentioned in its title including the following: “Kankakee County government supports local law enforcement, which includes our local Sheriff’s Police, United States Marshals, ICE, ... and we acknowledge that immigrants also desire full participation in our shared American Dream. There are no ‘kids in cages’ in Kankakee County, no arrests by ICE in our Courthouse, and no arrests by any local law enforcement based on legal status.”

The resolution also reaffirmed support of the Civil Rights Act of 1964 and the Voting Rights Act of 1965, “but acknowledge we must together ensure that we continue to create a more perfect union.”

Theodis Pace, president of the Kankakee Branch of the NAACP, said it was important the resolution was far-reaching and that the group gathered for the law enforcement meeting needs to heighten the awareness of the document.

“It’s items like this that our community fails to realize the progressive things that we try to do as an organization, speaking on behalf of the NAACP and county government,” he said. “I think sometimes our citizens need to be aware of the things that we’re doing. If they talk about the negative things, then also we need to talk about the right things and the progressive things that are happening, particularly with the relationships that individuals are having in the county with the topic of police reform.”

The resolution also underlined the board position on defending police, saying, “As revenues allow, we commit to full funding of all public safety departments, which is comprised of the courts, Sheriff’s department, probation, public defender, circuit clerk and state’s attorney. We outright reject the policy of defunding law enforcement.”

The resolution also addressed further its stance on immigration and access to mental health: “We support legal immigration and a more expeditious path to citizenship in a framework that acknowledges the great effort and sacrifice by those that immigrated here legally.

“... We call for the exponential increase in the funding by the State of Illinois to local governments that will support increased and accessible mental health services for our citizens, both inside and outside the criminal justice system.” 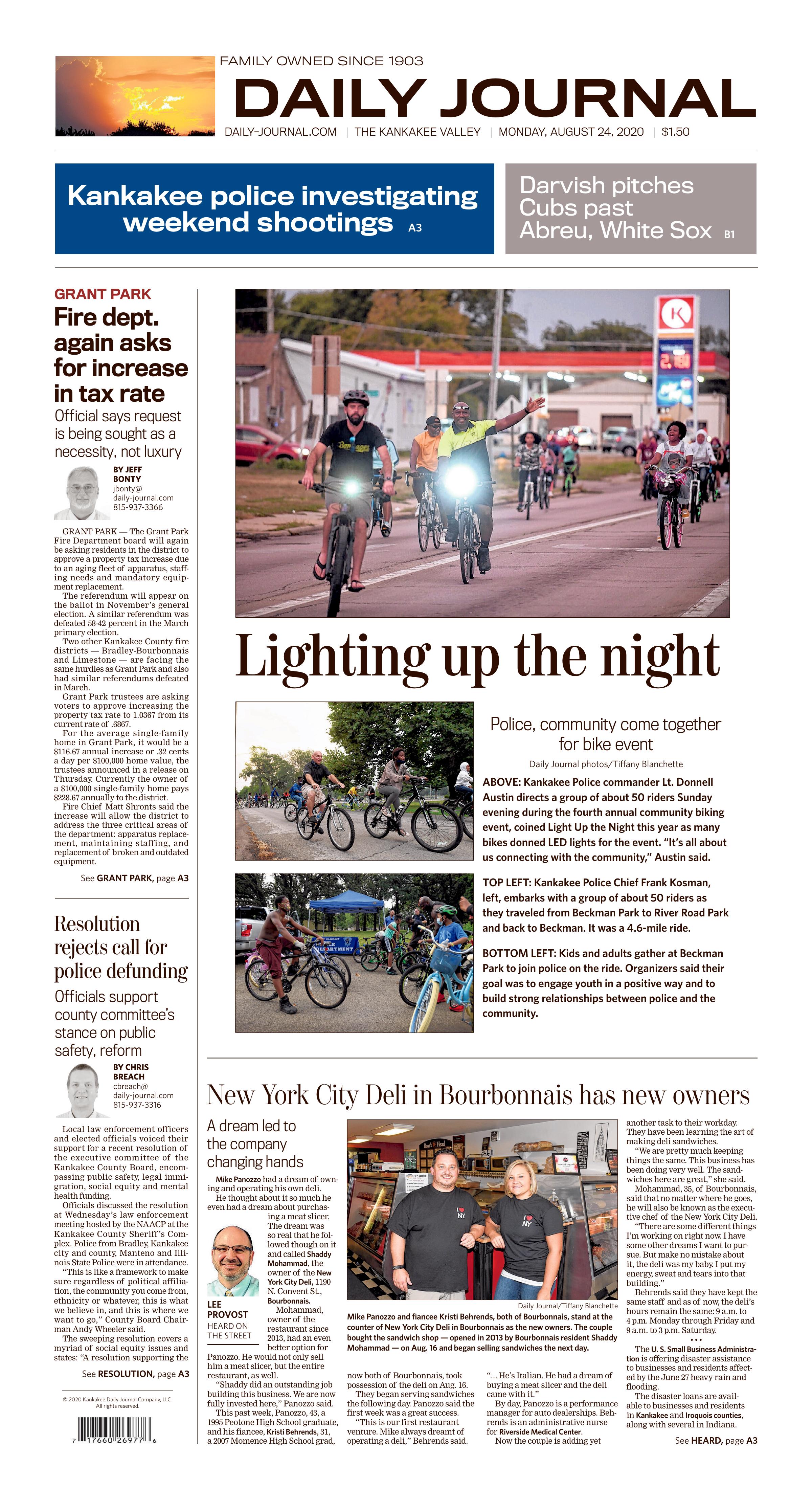