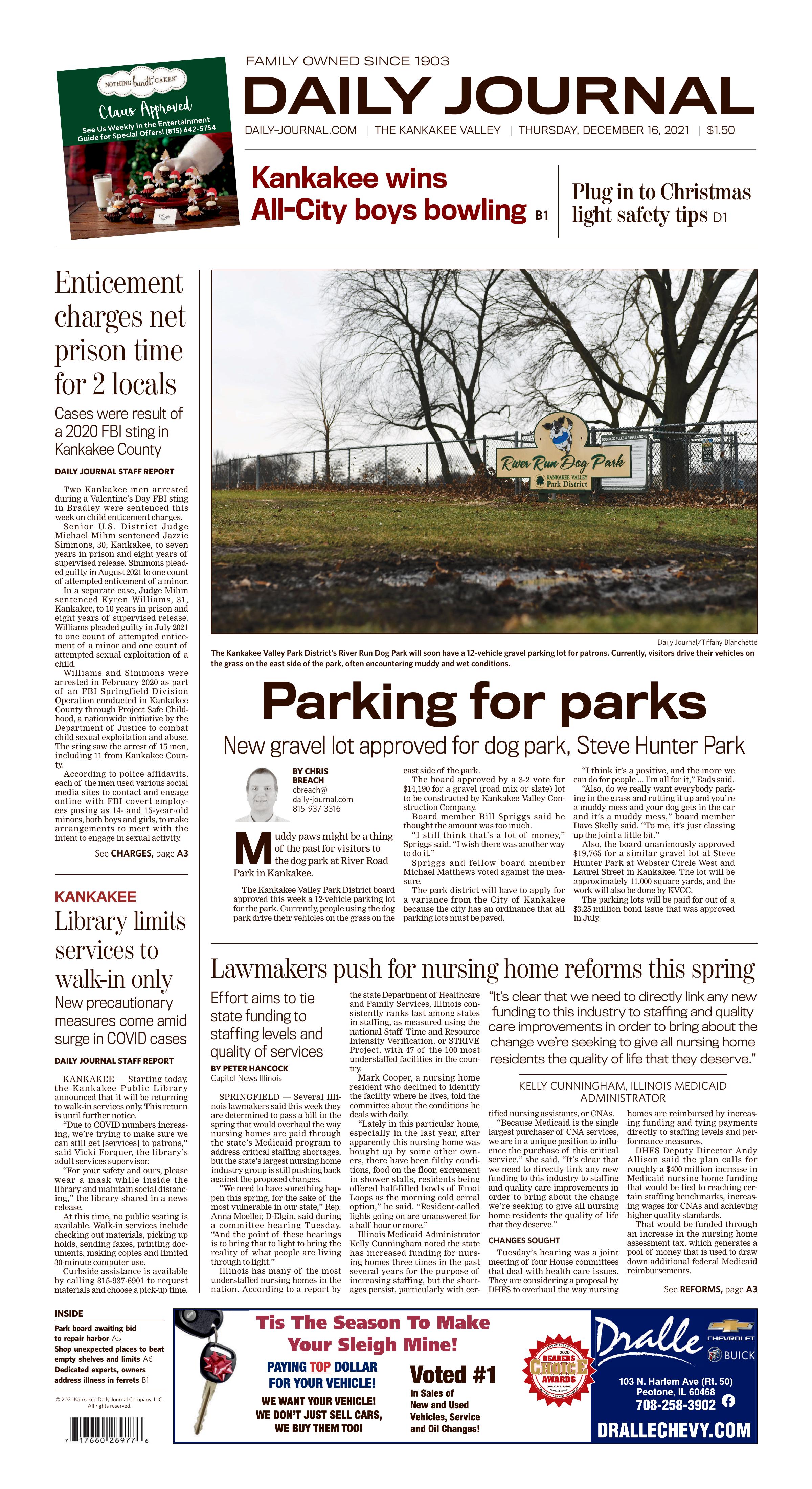 The Kankakee Valley Park District’s River Run Dog Park will soon have a 12-vehicle gravel parking lot for patrons. Currently, visitors drive their vehicles on the grass on the east side of the park, often encountering muddy and wet conditions. READ MORE.

Muddy paws might be a thing of the past for visitors to the dog park at River Road Park in Kankakee.

The Kankakee Valley Park District board approved this week a 12-vehicle parking lot for the park. Currently, people using the dog park drive their vehicles on the grass on the east side of the park.

The board approved by a 3-2 vote for $14,190 for a gravel (road mix or slate) lot to be constructed by Kankakee Valley Construction Company.

Board member Bill Spriggs said he thought the amount was too much.

“I still think that’s a lot of money,” Spriggs said. “I wish there was another way to do it.”

Spriggs and fellow board member Michael Matthews voted against the measure.

The park district will have to apply for a variance from the City of Kankakee because the city has an ordinance that all parking lots must be paved.

“I think it’s a positive, and the more we can do for people ... I’m all for it,” Board president Ray Eads said.

“Also, do we really want everybody parking in the grass and rutting it up and you’re a muddy mess and your dog gets in the car and it’s a muddy mess,” board member Dave Skelly said. “To me, it’s just classing up the joint a little bit.”

Also, the board unanimously approved $19,765 for a similar gravel lot at Steve Hunter Park at Webster Circle West and Laurel Street in Kankakee. The lot will be approximately 11,000 square yards, and the work will also be done by KVCC.

The parking lots will be paid for out of a $3.25 million bond issue that was approved in July.

The Kankakee Valley Park District is moving forward to implement a COVID testing policy for its employees.

SPRINGFIELD — Several Illinois lawmakers said this week they are determined to pass a bill in the spring that would overhaul the way nursing homes are paid through the state’s Medicaid program to address critical staffing shortages, but the state’s largest nursing home industry group is still pushing back against the proposed changes.

“We need to have something happen this spring, for the sake of the most vulnerable in our state,” Rep. Anna Moeller, D-Elgin, said during a committee hearing Tuesday. “And the point of these hearings is to bring that to light to bring the reality of what people are living through to light.”

Illinois has many of the most understaffed nursing homes in the nation. According to a report by the state Department of Healthcare and Family Services, Illinois consistently ranks last among states in staffing, as measured using the national Staff Time and Resource Intensity Verification, or STRIVE Project, with 47 of the 100 most understaffed facilities in the country.

Mark Cooper, a nursing home resident who declined to identify the facility where he lives, told the committee about the conditions he deals with daily.

“Lately in this particular home, especially in the last year, after apparently this nursing home was bought up by some other owners, there have been filthy conditions, food on the floor, excrement in shower stalls, residents being offered half-filled bowls of Froot Loops as the morning cold cereal option,” he said. “Resident-called lights going on are unanswered for a half hour or more.”

Illinois Medicaid Administrator Kelly Cunningham noted the state has increased funding for nursing homes three times in the past several years for the purpose of increasing staffing, but the shortages persist, particularly with certified nursing assistants, or CNAs.

“Because Medicaid is the single largest purchaser of CNA services, we are in a unique position to influence the purchase of this critical service,” she said. “It’s clear that we need to directly link any new funding to this industry to staffing and quality care improvements in order to bring about the change we’re seeking to give all nursing home residents the quality of life that they deserve.”

Tuesday’s hearing was a joint meeting of four House committees that deal with health care issues. They are considering a proposal by DHFS to overhaul the way nursing homes are reimbursed by increasing funding and tying payments directly to staffing levels and performance measures.

That would be funded through an increase in the nursing home assessment tax, which generates a pool of money that is used to draw down additional federal Medicaid reimbursements.

“For a facility that’s 100 percent Medicaid, we would come darn close to fully paying for the increased hiring. It was designed in that way,” he said.

But the plan is still facing stiff resistance from the state’s largest nursing home industry group, the Health Care Council of Illinois.

HCCI Executive Director Matt Pickering told the committee that if the agency’s proposed new payment system were enacted, 130 nursing facilities in Illinois would see an overall cut in revenues, with as many as 50 being pushed to the point of insolvency. Those 50 facilities, he said, serve more than 5,000 residents, mainly in rural and minority communities.

Pickering said the nursing home industry in Illinois is already facing financial strains, much of which he blamed on the state’s privatized Medicaid system in which for-profit insurance companies, known as managed care organizations, are in charge of reimbursing providers and managing each patient’s care.

“These challenges have coalesced into what we’ve called the perfect storm for our industry,” he said. “Compounding our financial burdens are the managed care organizations that routinely deny reimbursements to providers who treat low income patients.”

Allison, however, noted in his testimony that the 50 facilities identified by HCCI were all earning high profits before the COVID-19 pandemic and were “exceptionally low staffed, even in comparison to other for-profit homes.”

“The foremost issue for these homes is whether they can staff up,” he said. “So we looked at the cost of staffing up, and even if we were to assign, for example, what likely is an overstated cost of $29 an hour for the additional hours of nurse staffing that would be required in these homes to get them up to minimal levels as a group, even with those costs under the proposed reforms, in aggregate, these homes would still earn a profit.”

Meanwhile, Rep. Moeller said she argued that it is time for the state to stop funding nursing facilities that provide substandard levels of care.

Rep. Deb Conroy, D-Elmhurst, noted that the committees have been working on nursing home payment reform for several months and at one point this fall had what many believed was an “agreed bill” that all of the stakeholders could accept. She said she believes it’s time for the General Assembly to act.

“Might I suggest that the agreed-upon legislation that we had a few months ago be filed, and then those who have issues or would like to see changes, file amendments,” she said. “That way, everyone can see clearly where the issues are. I think it’s important because this has become such a contentious issue. I think it’s very important that all of our colleagues understand exactly what is going on.”

Lawmakers return to Springfield Jan. 4 for what is scheduled to be an abbreviated 2022 session. They hope to wrap up their business by April 8.

Two Kankakee men arrested during a Valentine’s Day FBI sting in Bradley were sentenced this week on child enticement charges.

Williams and Simmons were arrested in February 2020 as part of an FBI Springfield Division Operation conducted in Kankakee County through Project Safe Childhood, a nationwide initiative by the Department of Justice to combat child sexual exploitation and abuse. The sting saw the arrest of 15 men, including 11 from Kankakee County.

According to police affidavits, each of the men engaged online on various social media sites with FBI covert employees posing as 14- and 15-year-old minors, both boys and girls.

Both Williams and Simmons have remained in the custody of the U.S. Marshals Service since their arrests.

“This operation and other similar ones show our continued commitment, along with the FBI and our other law enforcement partners, to uncover and prosecute sexual predators,” U.S. Attorney Gregory K. Harris said in a press release. “Parents and other caregivers need to continually monitor their children’s electronic communications to protect them from such offenders.”

David Nanz, special agent in charge of the FBI’s Springfield office, said the “online environment can be a dangerous place.”

“That’s why the FBI will never give up the exhaustive work of rooting out those who prey on innocent children,” he said in a press release. “These sentences demonstrate the importance of the collaborative work among our law enforcement partners to hold sexual predators accountable.”

The sting was a part of Project Safe Childhood, a nationwide initiative by the Department of Justice to combat child sexual exploitation and abuse.

After the Kankakee Public Library's lions had their masks removed this summer, the library is returning to walk-in services only and is requesting patrons wear masks.

KANKAKEE — Starting today, the Kankakee Public Library announced that it will be returning to walk-in services only. This return is until further notice.

“Due to COVID numbers increasing, we’re trying to make sure we can still get [services] to patrons,” said Vicki Forquer, the library’s adult services supervisor.

“For your safety and ours, please wear a mask while inside the library and maintain social distancing,” the library shared in a news release.

At this time, no public seating is available. Walk-in services include checking out materials, picking up holds, sending faxes, printing documents, making copies and limited 30-minute computer use.

Curbside assistance is available by calling 815-937-6901 to request materials and choose a pick-up time.

What's happening this week at your local library.