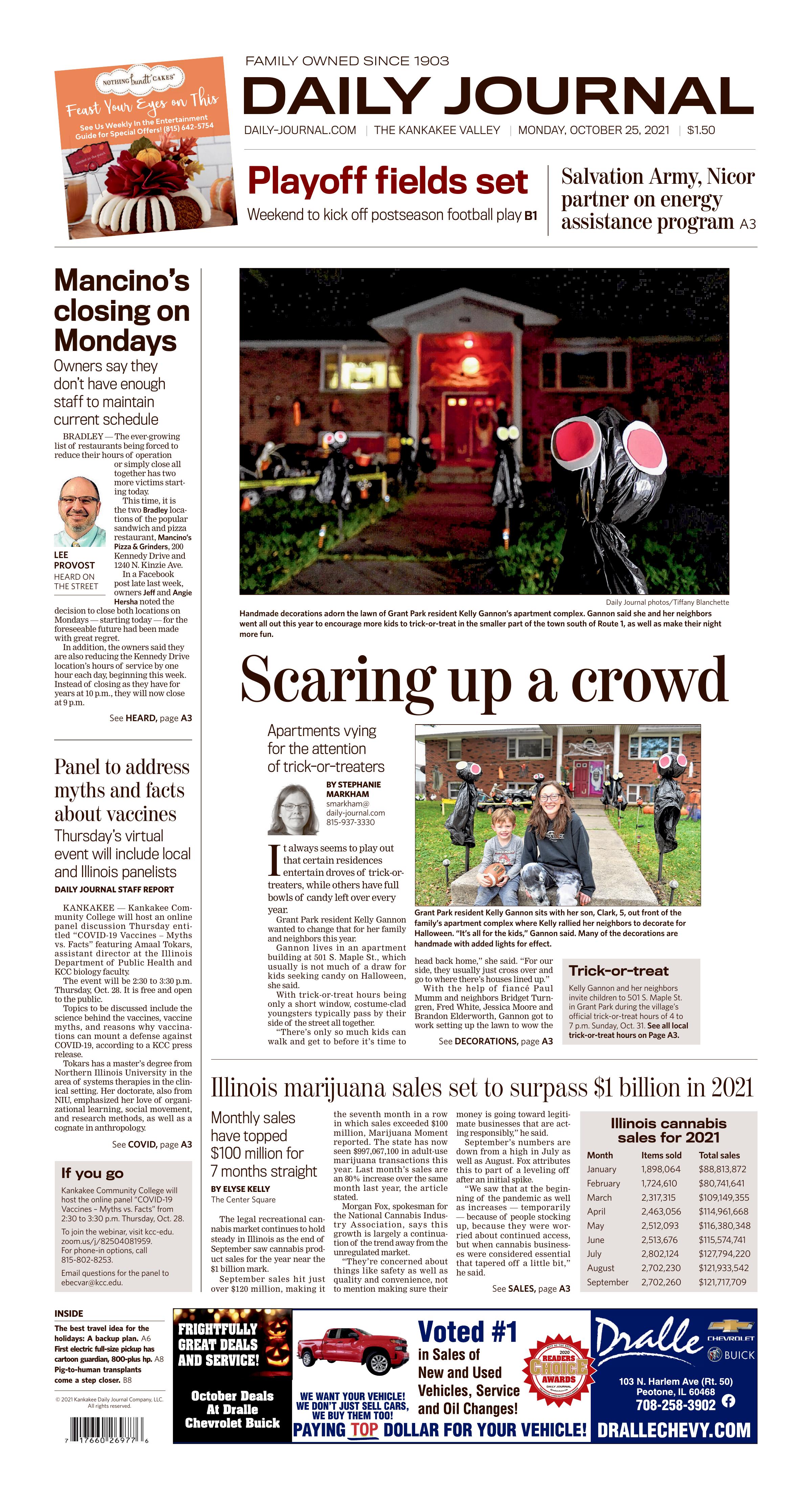 Grant Park resident Kelly Gannon sits with her son, Clark, 5, out front of the family’s apartment complex where Kelly rallied her neighbors to decorate for Halloween. “It’s all for the kids,” Gannon said. Many of the decorations are handmade with added lights for effect.

Handmade decorations adorn the lawn of Grant Park resident Kelly Gannon’s apartment complex. Gannon said she and her neighbors went all out this year to encourage more kids to trick-or-treat in the smaller part of the town south of Route 1, as well as make their night more fun.

Handmade decorations adorn the lawn of Grant Park resident Kelly Gannon’s apartment complex. Gannon said she and her neighbors went all out this year to encourage more kids to trick-or-treat in the smaller part of the town south or Route 1, as well as make their night more fun. READ MORE.

Grant Park resident Kelly Gannon strikes a pose out front of her apartment complex where she rallied her neighbors to decorate for Halloween. “It’s all for the kids,” Gannon said.

GRANT PARK — It always seems to play out that certain residences entertain droves of trick-or-treaters, while others have full bowls of candy left over every year.

Grant Park resident Kelly Gannon wanted to change that for her family and neighbors this year.

Gannon lives in an apartment building at 501 S. Maple St., which usually is not much of a draw for kids seeking candy on Halloween, she said.

With trick-or-treat hours being only a short window, costume-clad youngsters typically pass by their side of the street all together.

“There’s only so much kids can walk and get to before it’s time to head back home,” she said. “For our side, they usually just cross over and go to where there’s houses lined up.”

With the help of fiancé Paul Mumm and neighbors Bridget Turngren, Fred White, Jessica Moore and Brandon Elderworth, Gannon got to work setting up the lawn to wow the neighborhood kids, crafting a spooky scene from everyday items around the house and supplies from a quick trip to the hardware store.

Gannon used two days she had off work to get a good portion of the display done and slowly added things here and there. She was finally satisfied with how everything looked in about a week.

While she typically decorates her home for Halloween, Gannon said that this year she “really wanted to decorate big.”

Last year’s Halloween felt like the start of a new tradition, as it was the first social celebration Gannon enjoyed with family and friends after months of lockdown, she recalled.

Halloween will also be special this year because Gannon’s sister, a big fan of the holiday, will be in town from Louisiana, so she does not want to disappoint.

The big to-do over Halloween is also about getting the other apartment kids on the block and her children’s classmates in on the fun, she said. She has two children, Addison, 8, and Clark, 5.

“With Grant Park being so small, we wanted to show their classmates, too, that, ‘Hey, we’re over here. Come visit us over here!’”

Paul Melone, left, helps customer Brandon Nguyen, 27, at the Sunnyside dispensary in Chicago’s River North neighborhood on July 28. The dispensary was the closest marijuana shop to the Lollapalooza music festival.

The legal recreational cannabis market continues to hold steady in Illinois as the end of September saw cannabis product sales for the year near the $1 billion mark.

September sales hit just over $120 million, making it the seventh month in a row in which sales exceeded $100 million, Marijuana Moment reported. The state has now seen $997,067,100 in adult-use marijuana transactions this year. Last month’s sales are an 80% increase over the same month last year, the article stated.

Morgan Fox, spokesman for the National Cannabis Industry Association, says this growth is largely a continuation of the trend away from the unregulated market.

“They’re concerned about things like safety as well as quality and convenience, not to mention making sure their money is going toward legitimate businesses that are acting responsibly,” he said.

September’s numbers are down from a high in July as well as August. Fox attributes this to part of a leveling off after an initial spike.

“We saw that at the beginning of the pandemic as well as increases — temporarily — because of people stocking up, because they were worried about continued access, but when cannabis businesses were considered essential that tapered off a little bit,” he said.

That revenue could see a drop as other states legalize, but Fox thinks growth could continue as more businesses get licensed — and if the state would get out of the way.

“We will continue to see that growth, and honestly, I think we would see much more growth if the state were to decrease taxes on cannabis businesses and if the federal government would make it easier for them to find things like banking and financial services and traditional lending so that the regulated businesses would be able to more easily compete with the unregulated market,” he said.

In this file photograph, Mancino’s Pizza & Grinders owner Jeff Hersha works to fill an order at the Mancino’s location on Kennedy Drive in Bradley.

BRADLEY — The ever-growing list of restaurants being forced to reduce their hours of operation or simply close all together has two more victims starting today.

This time, it is the two Bradley locations of the popular sandwich and pizza restaurant, Mancino’s Pizza & Grinders, 200 Kennedy Drive and 1240 N. Kinzie Ave.

In a Facebook post late last week, owners Jeff and Angie Hersha noted the decision to close both locations on Mondays — starting today — for the foreseeable future had been made with great regret.

In addition, the owners said they are also reducing the Kennedy Drive location’s hours of service by one hour each day, beginning this week. Instead of closing as they have for years at 10 p.m., they will now close at 9 p.m.

The Kinzie Avenue location opened in November 1995 and the Kennedy Drive eatery opened in December 1999.

Prior to these new schedule modifications, the Kennedy Drive restaurant had been open daily, except Sunday, from 11 a.m. to 10 p.m., while the Kinzie Avenue site was open from 11 a.m. to 9 p.m.

“This is all due to our inability to staff our restaurants properly,” the couple wrote on Facebook.

They stated they have been very concerned about the hours their staff had been working to keep the restaurants opened.

“They are tired and all are working too hard,” the message read. “Work shouldn’t be that way. So, with these changes, Angie and I hope that the stress will be decreased, and the smiles of our employees will increase!”

The owners noted they are proud of the current staff for three top reasons. First, they are “working” Americans; they are Mancino’s employees; and they continue to do good work.

They noted their success as business owners is tired directly to the employees and “we want them to be happy working here with us.”

The concluded their message by thanking those who continue to patronize their business.

“The greatest people in town dine here,” they concluded.

Late in 2020, the business owners made the decision to close their restaurants on Sundays, citing the hours their employees were working.

In recent weeks, Blue’s Cafe in Kankakee and Beggars Pizza in Bourbonnais temporarily closed due to work shortages. JR’s Chicken, which has a Kankakee and a Bourbonnais location, closed the Bourbonnais site due to this same issue.

Restaurants and businesses in general have been experiencing difficulties in getting workers to return to the job market with the COVID-induced shutdown and its ramifications.

Topics to be discussed include the science behind the vaccines, vaccine myths, and reasons why vaccinations can mount a defense against COVID-19, according to a KCC press release.

Tokars has a master’s degree from Northern Illinois University in the area of systems therapies in the clinical setting. Her doctorate, also from NIU, emphasized her love of organizational learning, social movement, and research methods, as well as a cognate in anthropology.

Tokars is a graduate of the Navy Post Graduate School Executive Leaders Program in California. She has more than 30 years of work experience in behavioral health and approximately 15 years in public health, clinical, policy and research.

Those with questions for the panelists to address can email ebecvar@kcc.edu.

Email questions for the panel to ebecvar@kcc.edu.