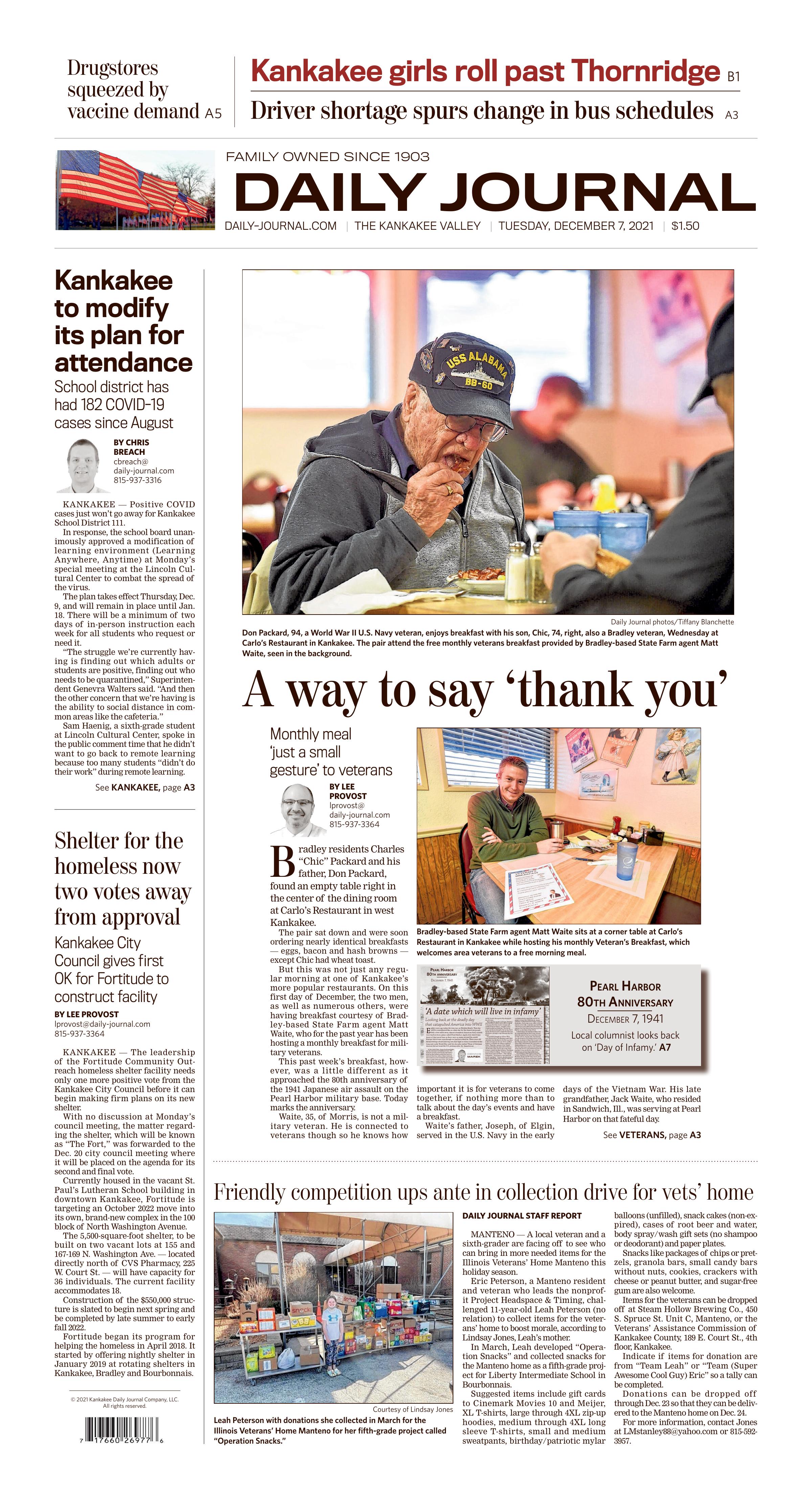 KANKAKEE — Bradley residents Charles “Chic” Packard and his father, Don Packard, found an empty table right in the center of the dining room at Carlo’s Restaurant in west Kankakee.

The pair sat down and were soon ordering nearly identical breakfasts — eggs, bacon and hash browns — except Chic had wheat toast.

But this was not just any regular morning at one of Kankakee’s more popular restaurants. On this first day of December, the two men, as well as numerous others, were having breakfast courtesy of Bradley-based State Farm agent Matt Waite, who for the past year has been hosting a monthly breakfast for military veterans.

The most recent breakfast, however, was a little different as it approached the 80th anniversary of the 1941 Japanese air assault on the Pearl Harbor military base. Today marks the anniversary.

Waite, 35, of Morris, is not a military veteran. He is connected to veterans, though, so he knows how important it is for veterans to come together — if nothing more than to talk about the day’s events and have breakfast.

Waite’s father, Joseph, of Elgin, served in the U.S. Navy in the early days of the Vietnam War. His late grandfather, Jack Waite, who resided in Sandwich, Ill., was serving at Pearl Harbor on that fateful day.

“This is just a small gesture,” Waite said of the breakfast he has been hosting at Carlo’s since mid-2020.

The breakfast takes place every first Wednesday of the month. The typical tab for the breakfast is in the neighborhood of $500. State Farm corporate helps pay a portion of the cost.

Waite acknowledged this idea was not his. He said some State Farm locations in Will County’s Manhattan and Homer Glen had been doing this previously. He liked the concept so much, he brought it to Kankakee County.

He noted he is exploring the idea of perhaps offering a second breakfast or maybe lunch at an eastern Kankakee County spot.

Waite doesn’t walk around to the tables to chit-chat with the veterans. The event is not about signing up new insurance customers. Waite simply sits in a corner of the restaurant and lets the veterans enjoy one another’s company.

“I just hang out and let them eat,” he said. On any given first Wednesday he can host 40 to 50 men and women from the armed services.

“I’m not throwing business cards at them,” he said.

With the United States’ involvement in World War II now dating back 80 years, diners from that era are becoming fewer and fewer.

According to the U.S. Department of Veterans Affairs, of the 16 million men and women who served during World War II, only 240,329 remain.

Most of the veterans at the breakfast events date back to the Vietnam War. He is starting to host those who participated in the Gulf War and the following war on terror.

His son, Chic, said his only concern is he hopes Waite doesn’t spend too much of his own money on the breakfast events. He fears if that is the case, insurance rates could go up, he said with a laugh.

“We’ll be back in January,” Chic proclaimed.

Seated only feet away was Richard Skelly, 85, of Kankakee, a veteran of the U.S. Army from 1959-62. Skelly and his wife, Jean, attend the breakfast every month.

As Richard worked on his pancakes and sausage patties, he noted he’s told other veterans of the breakfast.

Joe Lanoue, an 82-year-old Bourbonnais who served in the U.S. Army from 1958-60, noted local veterans had gathered monthly but they lost their meeting place and their numbers had declined.

But he termed the fact they now can meet for this breakfast as “rewarding” and “gratifying.”

“It’s not about someone picking up the tab. It’s about the recognition,” Lanoue said. “We’re not seeking publicity, but when someone says ‘thank you,’ my reply is always that this was my duty and my honor. But it’s very rare to find someone like this who cares.”

And while every veteran offered thanks for the breakfast, Waite said he is the one who wants to say “thank you.”

Leah Peterson with donations she collected in March for the Illinois Veterans’ Home Manteno for her fifth-grade project called “Operation Snacks.”

Leah Peterson, front, second from left, with people who helped her collect and distribute snacks to Manteno Veterans’ Home in March for “Operation Snacks,” including Eric Peterson, right.

MANTENO — A local veteran and a sixth-grader are facing off to see who can bring in more needed items for the Illinois Veterans’ Home Manteno this holiday season.

Eric Peterson, a Manteno resident and veteran who leads the nonprofit Project Headspace & Timing, challenged 11-year-old Leah Peterson (no relation) to collect items for the veterans’ home to boost morale, according to Lindsay Jones, Leah’s mother.

In March, Leah developed “Operation Snacks” and collected snacks for the Manteno home as a fifth-grade project for Liberty Intermediate School in Bourbonnais.

Indicate if items for donation are from “Team Leah” or “Team (Super Awesome Cool Guy) Eric” so a tally can be completed.

Donations can be dropped off through Dec. 23 so that they can be delivered to the Manteno home on Dec. 24.

In response, the school board unanimously approved a modification of learning environment (Learning Anywhere, Anytime) at Monday’s special meeting at the Lincoln Cultural Center to combat the spread of the virus.

The plan takes effect Thursday, Dec. 9, and will remain in place until Jan. 18. There will be a minimum of two days of in-person instruction each week for all students who request or need it.

“The struggle we’re currently having is finding out which adults or students are positive, finding out who needs to be quarantined,” Superintendent Genevra Walters said. “And then the other concern that we’re having is the ability to social distance in common areas like the cafeteria.”

Sam Haenig, a sixth-grade student at Lincoln Cultural Center, spoke in the public comment time that he didn’t want to go back to remote learning because too many students “didn’t do their work” during remote learning.

Walters assured Haenig that students who want to attend school every day will have that option.

The changes are being made as safety measures as 56 adults and 126 students have tested positive for COVID-19 since August. As of Monday, another six adults and 581 students are being isolated.

The plan also states that remote students will have Zoom instruction with the teacher, and students who are struggling will be contacted and mandated to attend school in order to avoid truancy.

King Middle School will be closed until Dec. 14.

“We really need to follow the COVID protocol guidelines that have been set up by the district,” Board President Barbara Wells said.

Walters said the Learning Anywhere, Anytime plan has been misconstrued in the past as remote time.

The plan also includes the following:

• All teachers shall provide in-person instruction for students who are blended (in-person and remote) based on students' needs and requests if the families select blended or traditional.

• All staff will report to the building unless they were hired as remote teachers or have accommodations due to medical restrictions through human resources.

• Each building will develop a phone call/home visit team using a spreadsheet for two-way communication with parents, surrounding work completion and quality of work.

• Athletics and activities will continue. Each coach or sponsor must return to checking symptoms and temperatures. Spectators must wear masks.

• The high school must implement all-day rooms for students who are behind and need additional support.

• Teachers are expected to communicate with parents weekly about work completion and quality of work.

• Food service and transportation will continue to run daily.

• Buildings/grounds will be expected to be deep-cleaned.

KANKAKEE — The leadership of the Fortitude Community Outreach homeless shelter facility needs only one more positive vote from the Kankakee City Council before it can begin making firm plans on its new shelter.

With no discussion at Monday’s council meeting, the matter regarding the shelter, which will be known as “The Fort,” was forwarded to the Dec. 20 city council meeting where it will be placed on the agenda for its second and final vote.

Currently housed in the vacant St. Paul’s Lutheran School building in downtown Kankakee, Fortitude is targeting an October 2022 move into its own, brand-new complex in the 100 block of North Washington Avenue.

Construction of the $550,000 structure is slated to begin next spring and be completed by late summer to early fall 2022.

Fortitude began its program for helping the homeless in April 2018. It started by offering nightly shelter in January 2019 at rotating shelters in Kankakee, Bradley and Bourbonnais.