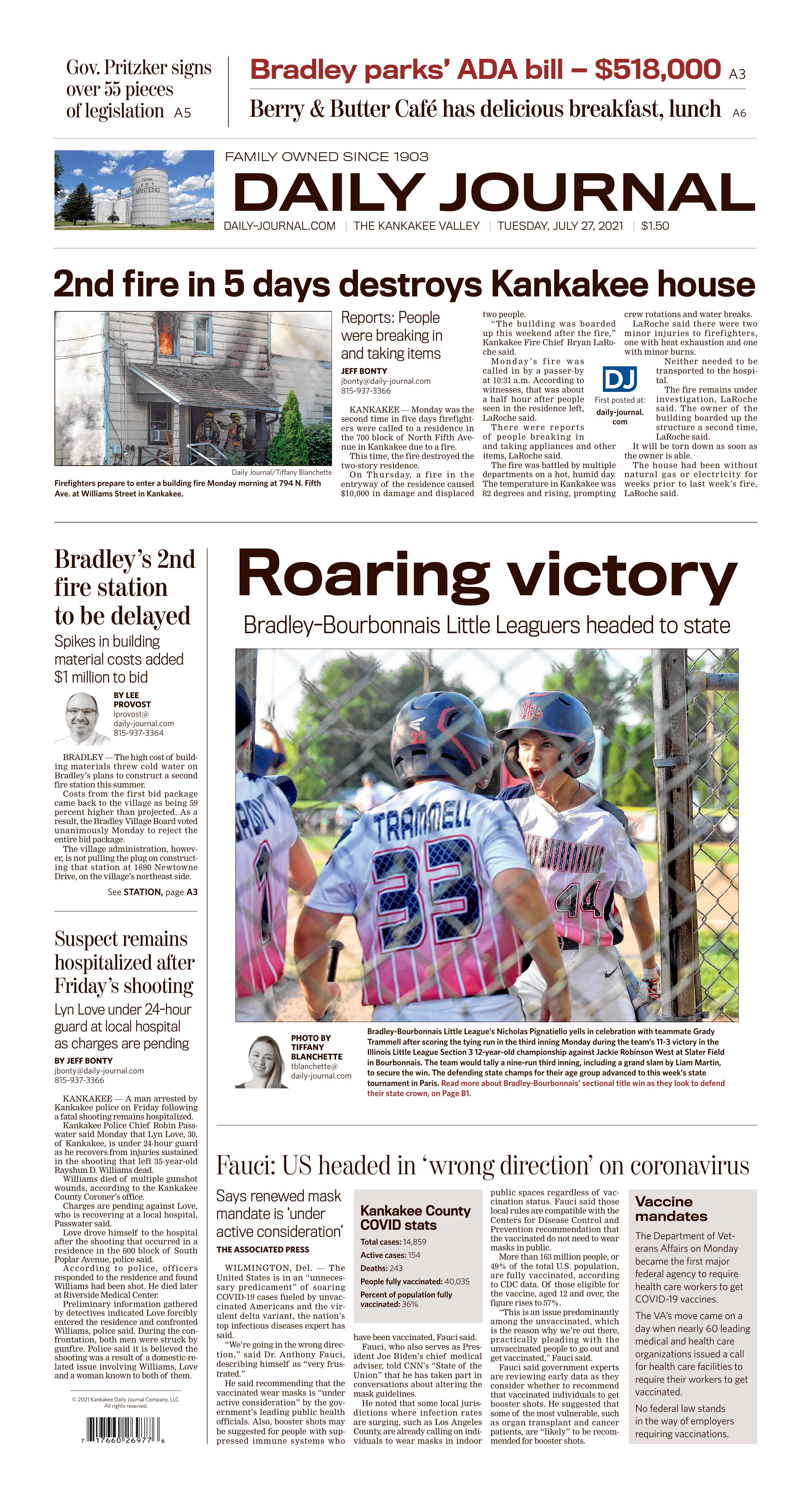 Firefighters prepare to enter a building fire Monday morning at 794 N. Fifth Ave. at Williams Street in Kankakee. On Thursday, a fire in the entryway of the same two-story house caused $10,000 in damages.

Firefighters from multiple agencies battle a fire Monday morning at 794 N. Fifth Ave. at Williams Street in Kankakee. Last Thursday, a fire in the entryway of the same two-story house caused $10,000 in damage.

Kankakee firefighter Jed Beaupre dumps water over his head to cool off Monday morning as crews from multiple agencies battle a fire. The temperature in Kankakee was 82 degrees and rising, prompting crew rotations and water breaks. READ MORE.

A Kankakee firefighter crosses the street as crews from multiple agencies battle a fire Monday morning at 794 North Fifth Avenue at Williams Street in Kankakee. Last Thursday, a fire in the entryway of the same two-story house caused $10,000 in damages.

KANKAKEE — Monday was the second time in five days firefighters were called to a residence in the 700 block of North Fifth Avenue in Kankakee due to a fire.

This time, the fire destroyed the two-story residence.

On Thursday, a fire in the entryway of the residence caused $10,000 in damage and displaced two people.

“The building was boarded up this weekend after the fire,” Kankakee Fire Chief Bryan LaRoche said.

Monday’s fire was called in by a passer-by at 10:31 a.m. According to witnesses, that was about a half hour after people seen in the residence left, LaRoche said.

There were reports of people breaking in and taking appliances and other items, LaRoche said.

The fire was battled by multiple departments on a hot, humid day. The temperature in Kankakee was 82 degrees and rising, prompting crew rotations and water breaks.

LaRoche said there were two minor injuries to firefighters, one with heat exhaustion and one with minor burns.

Neither needed to be transported to the hospital.

The fire remains under investigation, LaRoche said. The owner of the building boarded up the structure a second time, LaRoche said.

It will be torn down as soon as the owner is able.

The house had been without natural gas or electricity for weeks prior to last week’s fire, LaRoche said. 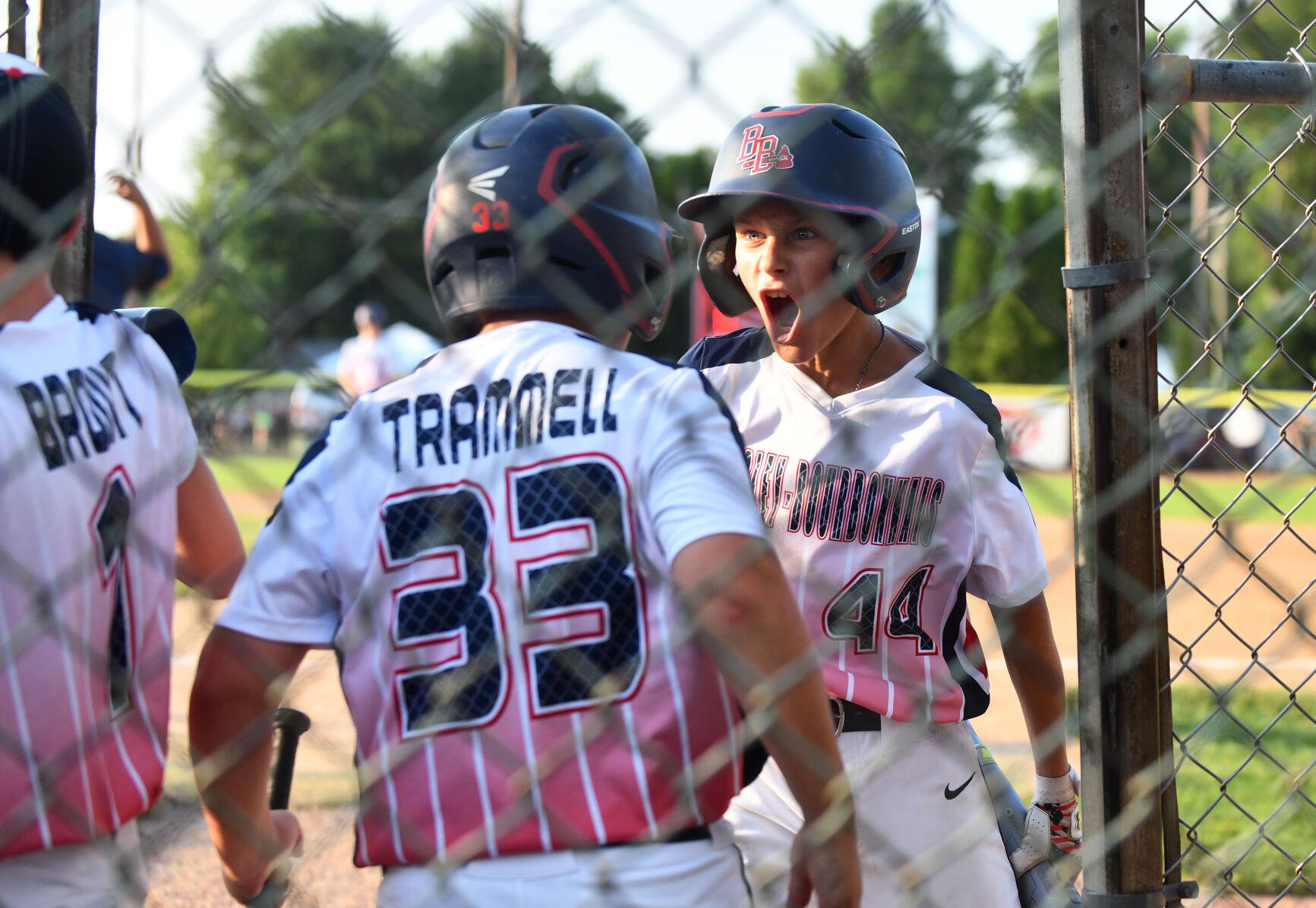 Bradley-Bourbonnais Little League’s Nicholas Pignatiello yells in celebration with teammate Grady Trammell after scoring the tying run in the third inning Monday during the team’s 11-3 victory in the Illinois Little League Section 3 12-year-old championship against Jackie Robinson West at Slater Field in Bourbonnais. The team would tally a nine-run third inning, including a grand slam by Liam Martin, to secure the win. The defending state champs for their age group advanced to this week’s state tournament in Paris. Read more about Bradley-Bourbonnais’ sectional title win as they look to defend their state crown, on Page B1.

Coronavirus-local
Fauci: US headed in 'wrong direction' on coronavirus
White House via AP

In this image from video, Dr. Anthony Fauci, director of the National Institute of Allergy and Infectious Diseases and chief medical adviser to the president, speaks during a White House briefing on the Biden administration’s response to the COVID-19 pandemic Wednesday, Jan. 27, 2021, in Washington.

WILMINGTON, Del. — The United States is in an “unnecessary predicament” of soaring COVID-19 cases fueled by unvaccinated Americans and the virulent delta variant, the nation’s top infectious diseases expert has said.

He said recommending that the vaccinated wear masks is “under active consideration” by the government’s leading public health officials. Also, booster shots may be suggested for people with suppressed immune systems who have been vaccinated, Fauci said.

Fauci, who also serves as President Joe Biden’s chief medical adviser, told CNN’s “State of the Union” that he has taken part in conversations about altering the mask guidelines.

He noted that some local jurisdictions where infection rates are surging, such as Los Angeles County, are already calling on individuals to wear masks in indoor public spaces regardless of vaccination status. Fauci said those local rules are compatible with the Centers for Disease Control and Prevention recommendation that the vaccinated do not need to wear masks in public.

More than 163 million people, or 49% of the total U.S. population, are fully vaccinated, according to CDC data. Of those eligible for the vaccine, aged 12 and over, the figure rises to 57%.

Fauci said government experts are reviewing early data as they consider whether to recommend that vaccinated individuals to get booster shots. He suggested that some of the most vulnerable, such as organ transplant and cancer patients, are “likely” to be recommended for booster shots.

The Department of Veterans Affairs on Monday became the first major federal agency to require health care workers to get COVID-19 vaccines.

The VA's move came on a day when nearly 60 leading medical and health care organizations issued a call for health care facilities to require their workers to get vaccinated. No federal law stands in the way of employers requiring vaccinations.

The Village of Bradley’s plans to construct a 3,500-square-foot second fire station at 1690 Newtowne Drive was put on hold after estimates came in $1 million higher than expected. The village still plans to redevelop the existing 4,200-square-foot building, the former Bradley-Bourbonnais Chamber of Commerce, to accommodate fire service.

Costs from the first bid package came back to the village as being 59 percent higher than projected. As a result, the Bradley Village Board voted unanimously Monday to reject the entire bid package.

The village administration, however, is not pulling the plug on constructing that station at 1690 Newtowne Drive, on the village’s northeast side.

The village, through its architect, had anticipated costs to be in the range of $1.7 million. The bid package coordinated by PSI Inc., the project’s construction manager, instead came in at $2,737,543.

The village will be looking to construct a 3,500-square-foot garage to house a fire engine and ambulance. The existing 4,200-square-foot building — once the home of the Bradley-Bourbonnais Chamber of Commerce — at the site will be redeveloped to accommodate fire service. The location will have living and training spaces.

The village’s lone fire station is located at the Bradley Municipal complex on West Broadway Street.

When the initial bids were sent earlier this year, the administration was hoping to gather at least three bids per each area of construction, such as excavation, electrical, heating/AC, roofing and so on, but bids were difficult to gain as many contractors are busy due to the abundance of work associated with the governmental COVID relief stimulus funding.

The construction industry was also facing supply chain issues for lumber and steel.

In all, there were 13 different bid packages.

Bradley Mayor Mike Watson said Monday if the new bid package gets to potential contractors within the next 30-60 days, there would still be time this year to begin site work.

“I think these costs will come down. Our initial plan had a very aggressive timeline,” he said.

The village’s first bid package got caught with the influx of construction projects which had building material prices soaring. Now that market has somewhat calmed, so Watson is hopeful the project cost will come down as well.

“But we are not backing away from this project,” the mayor said.” This is something which has been needed for some time. By taking our time with this, we believe it will pay dividends down the road.”

Watson said he wants competitive bidding as it brings down costs.

“I believe we will come back with better numbers,” he said.

Village finance director Rob Romo is crossing his fingers as the new bid package is being finalized.

“Our timing wasn’t good the first time around,” he said. “We had a tight timeline and the prices of lumber, steel and copper were crazy high. We believe we can do better.”

After the board meeting, Bradley Fire Chief Don Kaderabek agreed.

“We had one bidder in many [of the 13] categories,” he said. “With one bid we couldn’t tell if we’re getting the best bids we can.”

Kankakee Police Chief Robin Passwater said Monday that Lyn Love, 30, of Kankakee, is under 24-hour guard as he recovers from injuries sustained in the shooting that left 35-year-old Rayshun D. Williams dead.

Williams died of multiple gunshot wounds, according to the Kankakee County Coroner’s office.

Charges are pending against Love, who is recovering at a local hospital, Passwater said.

Love drove himself to the hospital after the shooting that occurred in a residence in the 600 block of South Poplar Avenue, police said.

According to police, officers responded to the residence and found Williams had been shot. He died later at Riverside Medical Center.

Preliminary information gathered by detectives indicated Love forcibly entered the residence and confronted Williams, police said. During the confrontation, both men were struck by gunfire. Police said it is believed the shooting was a result of a domestic-related issue involving Williams, Love and a woman known to both of them.