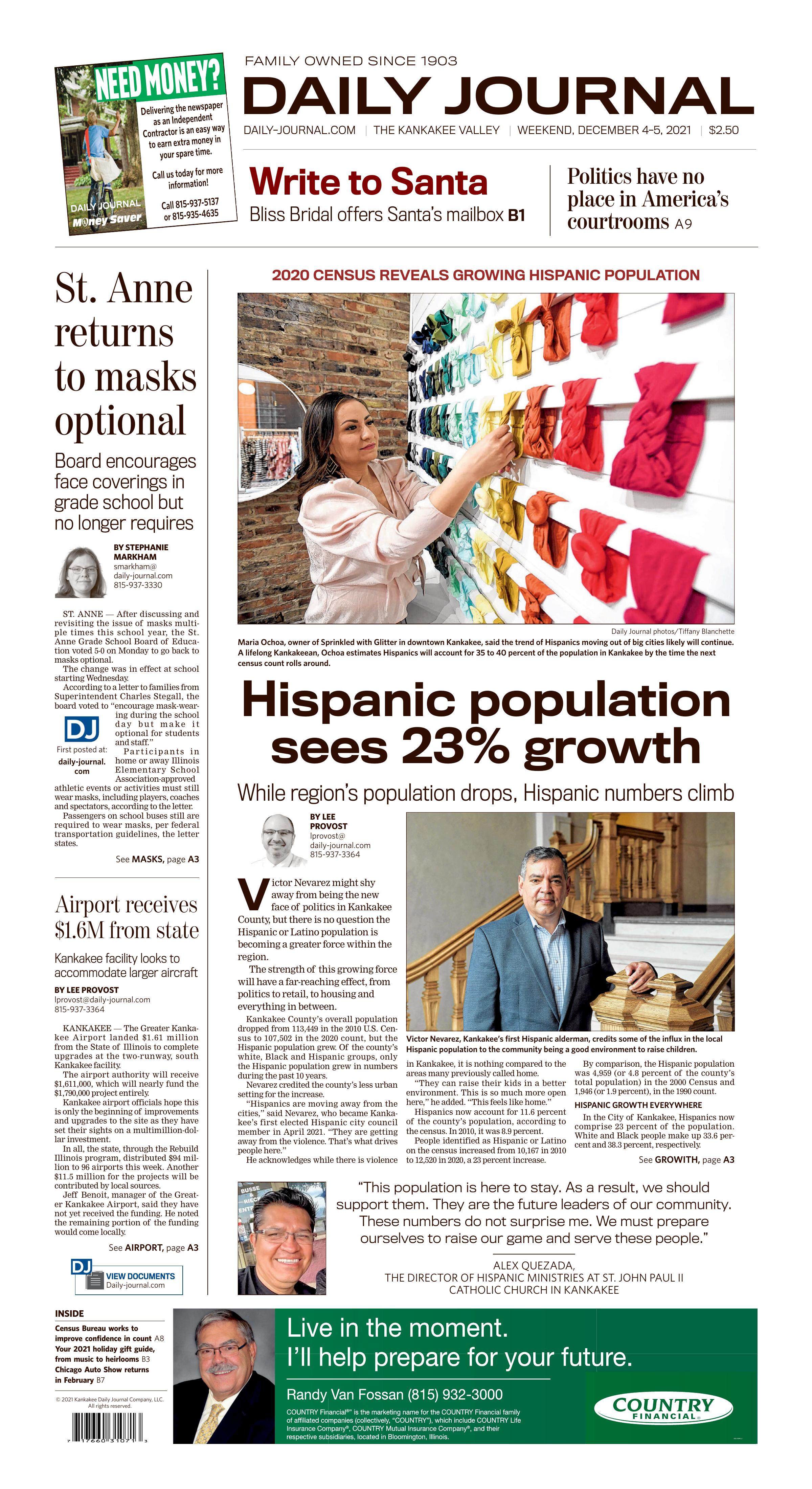 Maria Ochoa, owner of Sprinkled with Glitter in downtown Kankakee, said the trend of Hispanics moving out of big cities likely will continue. A lifelong Kankakeean, Ochoa estimates Hispanics will account for 35 to 40 percent of the population in Kankakee by the time the next census count rolls around.

Victor Nevarez, Kankakee’s first Hispanic alderman, credited some of the influx in the local Hispanic population to the community being a good environment to raise children.

A look at the change in Hispanic or Latino population in area communities since the 2010 Census.

Victor Nevarez might shy away from being the new face of politics in Kankakee County, but there is no question the Hispanic or Latino population is becoming a greater force within the region.

The strength of this growing force will have a far-reaching effect, from politics to retail, to housing and everything in between.

Nevarez credited the county’s less urban setting for the increase.

“Hispanics are moving away from the cities,” said Nevarez, who became Kankakee’s first elected Hispanic city council member in April 2021. “They are getting away from the violence. That’s what drives people here.”

He acknowledges while there is violence in Kankakee, it is nothing compared to the areas many previously called home.

“They can raise their kids in a better environment. This is so much more open here,” he added. “This feels like home.”

Hispanics now account for 11.6 percent of the county’s population, according to the census. In 2010, it was 8.9 percent.

In the City of Kankakee, Hispanics now comprise 23 percent of the population. White and Black people make up 33.6 percent and 38.3 percent, respectively.

By the time the 2030 census rolls around, Nevarez believes Hispanic people could represent as much as 40 percent of the city’s population.

“And the first-generation Hispanics are going to be voting age soon,” he said, adding that as future voters, they likely will see more Hispanics involved in the political process.

But, he said, Hispanic people are not moving to the region in search of dominance.

“They come to work,” he said. “They try to stay away from trouble. They keep to themselves. They are not here to take over.”

Regardless of the reason for the growth, there is no disputing the effect they are having now as well as in the years to come.

“Look around,” he said. “You see Hispanic businesses all over. Look in lower Riverview, there are Hispanic families throughout the neighborhood. I’m pleased to see this growth.”

Compared to Nevarez, Hunter has a more conservative estimate of future growth. By the next census, he estimated Hispanic people could make up 30 percent of Kankakee County’s population.

“And don’t forget, these 2020 numbers are probably an undercount,” Hunter noted, referring to widespread doubts about the thoroughness of the census as it was conducted during a pandemic.

For Kankakee County’s five neighbors, each county experienced growth within the Hispanic community. Nearly every municipality within Kankakee and Iroquois counties saw 2020 Hispanic population figures outpacing the figures from 2010.

“I definitely think it will definitely grow,” Ochoa said. “Hispanics are moving out of the big cities and suburbs and going south. They are moving to small towns like ours.”

She believes once here, they will plant their roots.

“I don’t see Hispanics leaving the area. ... And Hispanics have largely been timid and shy. That’s going away,” she said.

“We have to get out of our comfort zone. We can do more with business than just restaurants and grocery stores.”

In the Iroquois County community of Watseka, the Hispanic population nearly doubled in 10 years, growing from 189 to 370, representing a 95 percent increase.

Herscher Mayor Shannon Sweeney said while the percentage can be somewhat deceiving as the village’s total Hispanic numbers are somewhat low, he noted there is no question the village is seeing a surge in Hispanic residents.

“It’s good to see our population diversify a little bit,” Sweeney said. “To be honest, I do find it kind of surprising. But I do believe we are part of a growing trend.”

In Kankakee, where 23 percent of the city’s population is now Hispanic, Mayor Chris Curtis believes the number only will continue to rise.

“These numbers do not shock me,” Curtis said. “This group is a vital part of our community. I expect these numbers to only grow.”

Curtis is so sure of this that he is ensuring every city department has either at least one Hispanic employee or someone who is fluent in Spanish.

While Watseka’s Hispanic numbers dramatically rose within the past 10 years, the city’s Hispanic population amounts to just 7.9 percent of its total population.

By 2020, though, Mayor John Allhands believes that percentage could approach 20 percent.

He said he sees these growing numbers as he travels through the city. He said their presence only will make Watseka a better community.

“This population is here to stay. As a result, we should support them. They are the future leaders of our community. These numbers do not surprise me. We must prepare ourselves to raise our game and serve these people.

“We must open our hearts and our arms and make them feel they are welcomed,” he said.

Quezada added: “We need to embrace change. We have to think differently.”

ST. ANNE — After discussing and revisiting the issue of masks multiple times this school year, the St. Anne Grade School Board of Education voted 5-0 on Monday to go back to masks optional.

The change was in effect at school starting Wednesday.

According to a letter to families from Superintendent Charles Stegall, the board voted to “encourage mask-wearing during the school day but make it optional for students and staff.”

Participants in home or away Illinois Elementary School Association-approved athletic events or activities must still wear masks, including players, coaches and spectators, according to the letter.

Earlier this school year, the Illinois State Board of Education put St. Anne Grade School on probation after the school board voted to make masks optional.

Citing concerns about the threat of the loss of state funding and being pulled from IESA sports competitions, the board then voted for the school to reverse course and comply with the mask mandate.

St. Anne Grade School was taken off probation after the district provided evidence to ISBE that the mandate was being followed.

In the past, the board was divided each time a decision was made. This time, the decision was unanimous among the five board members present.

“I think the majority of the board felt that it was time to give the choice back to the parents and the people of District 256,” said Beaupre, board president.

“These mandates are ridiculous,” he added.

The district administration still is recommending following the mandate, he said.

There was discussion to bring the matter to another vote during the September board meeting, but that didn’t happen until the Nov. 29 meeting.

Beaupre said the board might have taken action sooner, but it delayed making any decisions because the district was one of about 150 across the state named in a class-action lawsuit about pandemic rules.

The lawsuit was filed in late October in the Seventh Judicial Circuit Court in Macoupin County.

As for the looming threats from ISBE regarding losing state recognition? That is a concern for another day.

“I’m sure it is in the back of our minds, but we will deal with that as it comes,” Beaupre said.

Improvement are planned at the Greater Kankakee Airport. Upgrading the runway is in the sights of the Kankakee Valley Airport Authority Board.

KANKAKEE — The Greater Kankakee Airport landed $1.61 million from the State of Illinois to complete upgrades at the two-runway, south Kankakee facility.

Kankakee airport officials hope this is only the beginning of improvements and upgrades to the site as they have set their sights on a multimillion-dollar investment.

In all, the state, through the Rebuild Illinois program, distributed $94 million to 96 airports this week. Another $11.5 million for the projects will be contributed by local sources.

Jeff Benoit, manager of the Greater Kankakee Airport, said they have not yet received the funding. He noted the remaining portion of the funding would come locally.

The money comes from the $45 billion Rebuild Illinois capital infrastructure plan which passed the General Assembly and the governor signed into law in 2019.

Rende Langlois, chairman of the Kankakee Valley Airport Authority, the governing body for the Greater Kankakee Airport, said the funding is hopefully just the beginning of needed funding.

The awarded money will be used to rehab portions of the taxiway for the 5,981-foot-long, north-south runway and relocating one of the main taxiways ramps on this runway.

The rebuilt taxiways will allow for greater turning range which will therefore allow for larger aircraft.

Construction is expected to take place in the spring of 2023 and take six months to complete. The project will likely go out to bid in January 2023.

“This is a huge thing,” Langlois said. “We knew this was coming. Is this exciting? Yes. This could be the tip of multi-millions in improvements here.”

Langlois said the airport has such great potential as a key economic engine for the entire region.

“I want to see buildings out here, manufacturing out here. This area could be a real jumping-off point for development,” Langlois said.

The airport’s second runway is 4,398 feet long. This runway will be resurfaced in 2022 at a cost of $1.3 million. This project is not part of the Rebuild Illinois program.

Of the 1,500 acres the airport authority controls, only about 600 actually are used by the airport. The remaining 900 acres around the complex are owned by the authority but largely are being farmed.

If and when development occurs, these 900 acres no longer would be leased to farmers but rather used for development, Benoit said.

Gov. JB Pritzker made the funding announcements while in Moline on Wednesday. The Quad Cities International Airport, which is located in Moline, received $5.6 million for entrance road realignment and parking expansion.

“Crucially, these dollars are going first and foremost to projects that might not otherwise be eligible for the full federal funding that they need to finish,” Pritzker said.

The program is largely funded through a doubling of the state’s motor fuel tax to 38 cents, a rate that now goes up annually at the inflationary rate. The measure also increased several fees motorists pay to the Illinois Secretary of State, including registration fees.

Nearly 100 airports across Illinois will receive state funding in the coming months for projects ranging from new runways and road relocations to the purchase of mowers and snow removal equipment.

Complete list of projects
Released by State of Illinois
Dec 3, 2021

A complete list of 2021 Rebuild Illinois Airport Capital Improvement Program released by the State of Illinois.