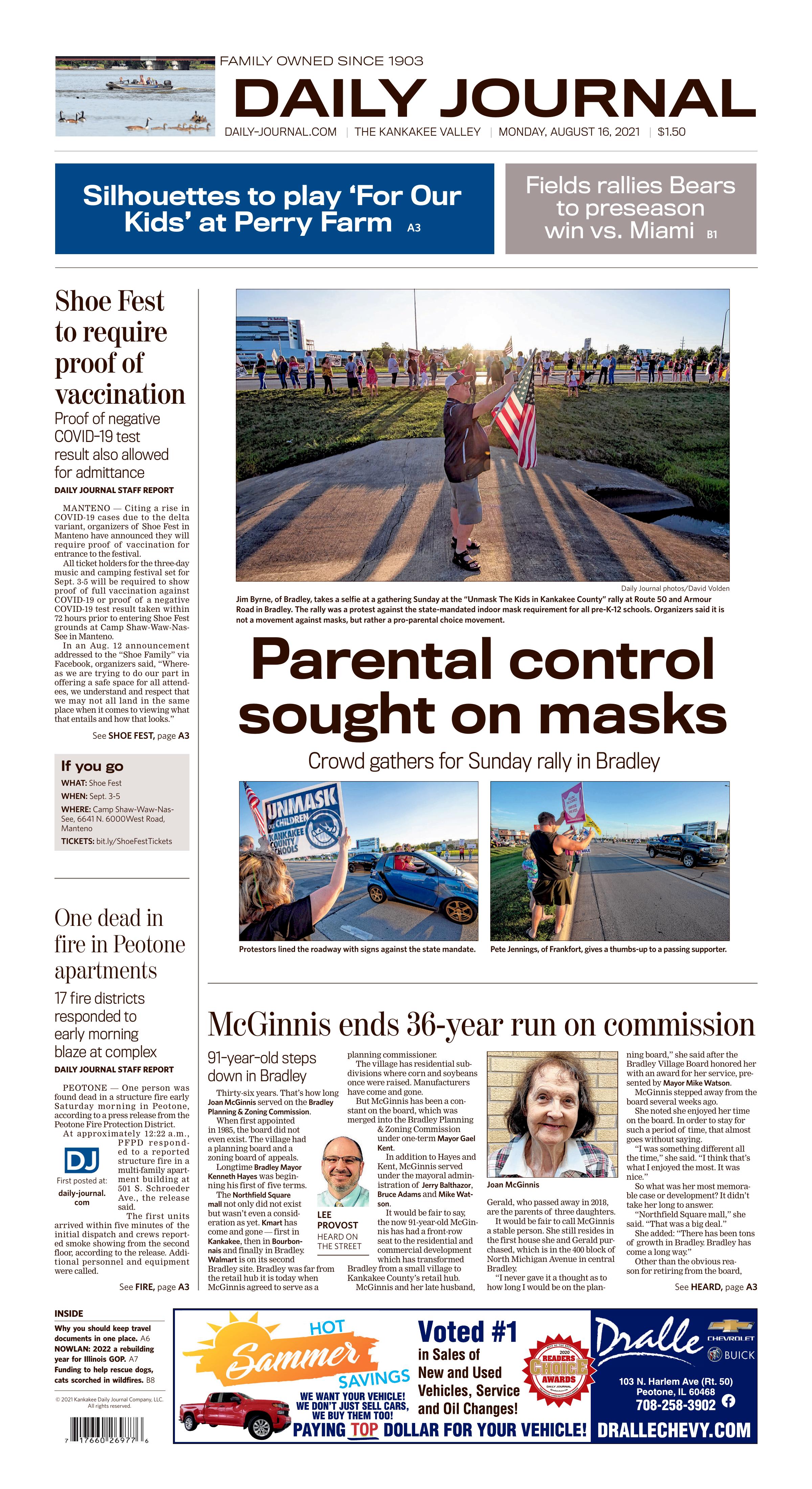 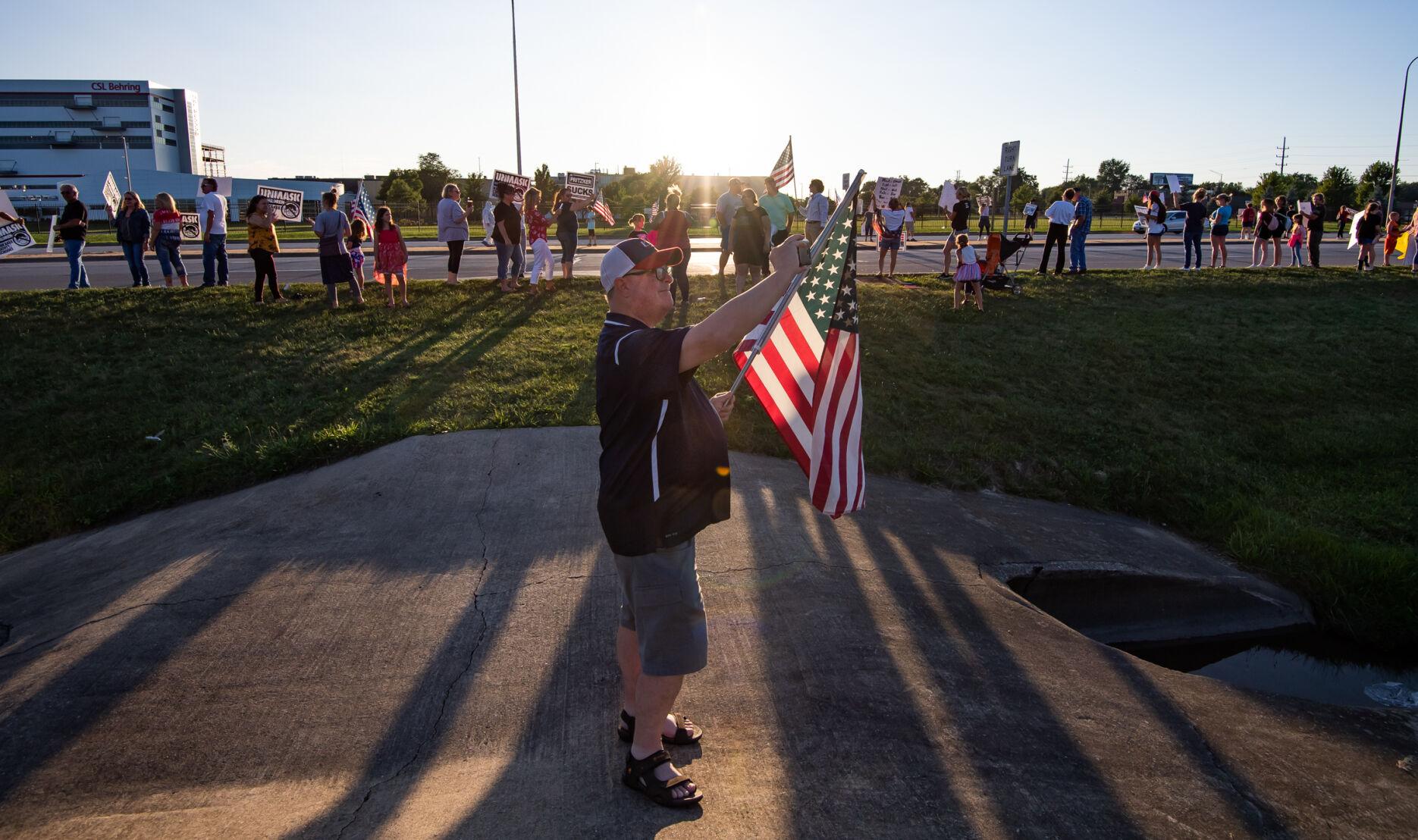 Jim Byrne, of Bradley, takes a selfie at a gathering Sunday at the “Unmask The Kids in Kankakee County” rally at Route 50 and Armour Road in Bradley. The rally was a protest against the state-mandated indoor mask requirement for all pre-K-12 schools. Organizers said it is not a movement against masks, but rather a pro-parental choice movement. MORE PHOTOS. 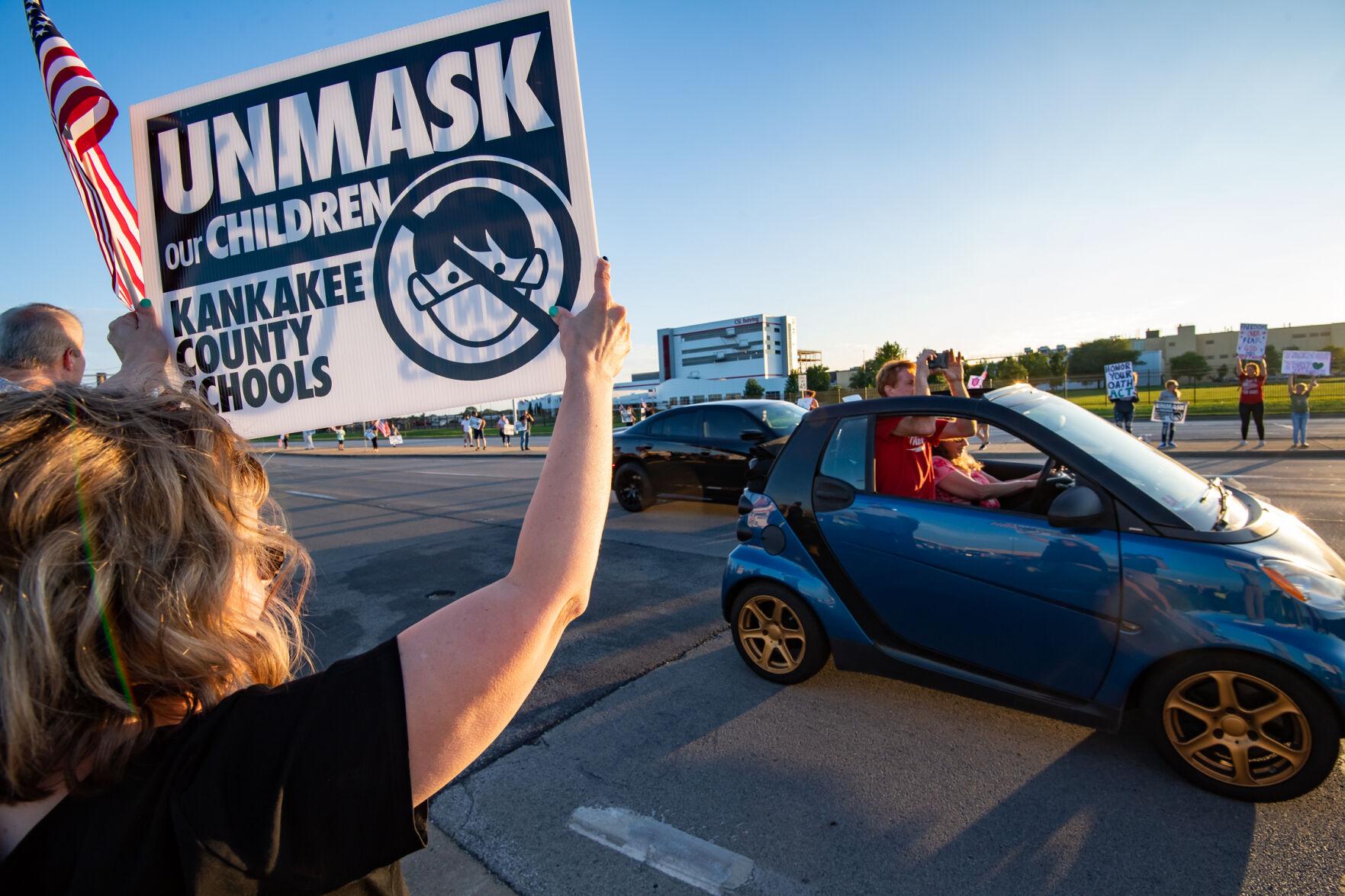 Protestors lined the roadway with signs against the state mandate.

When first appointed in 1985, the board did not even exist. The village had a planning board and a zoning board of appeals.

The Northfield Square mall not only did not exist but wasn’t even a consideration as yet. Kmart has come and gone — first in Kankakee, then in Bourbonnais and finally in Bradley. Walmart is on its second Bradley site. Bradley was far from the retail hub it is today when McGinnis agreed to serve as a planning commissioner.

The village has residential subdivisions where corn and soybeans once were raised. Manufacturers have come and gone.

But McGinnis has been a constant on the board, which was merged into the Bradley Planning & Zoning Commission under one-term Mayor Gael Kent.

In addition to Hayes and Kent, McGinnis served under the mayoral administration of Jerry Balthazor, Bruce Adams and Mike Watson.

It would be fair to say, the now 91-year-old McGinnis has had a front-row seat to the residential and commercial development which has transformed Bradley from a small village to Kankakee County’s retail hub.

McGinnis and her late husband, Gerald, who passed away in 2018, are the parents of three daughters.

It would be fair to call McGinnis a stable person. She still resides in the first house she and Gerald purchased, which is in the 400 block of North Michigan Avenue in central Bradley.

“I never gave it a thought as to how long I would be on the planning board,” she said after the Bradley Village Board honored her with an award for her service, presented by Mayor Mike Watson.

McGinnis stepped away from the board several weeks ago.

She noted she enjoyed her time on the board. In order to stay for such a period of time, that almost goes without saying.

“I was something different all the time,” she said. “I think that’s what I enjoyed the most. It was nice.”

So what was her most memorable case or development? It didn’t take her long to answer.

“Northfield Square mall,” she said. “That was a big deal.”

She added: “There has been tons of growth in Bradley. Bradley has come a long way.”

Other than the obvious reason for retiring from the board, McGinnis said the time had come to let some other residents to serve.

“Let someone else get there who is young and vibrant.”

Ryland Gagnon, who is the planning and zoning board chairman, noted he and McGinnis had served together for 34 years.

“We’ve gone through a lot of long meetings together to help determine what is best for Bradley. We’ve always taken it one item at a time,” he said.

Looking to his longtime board partner, he lightly touched her shoulder.

Bubbles float in the air near the Uncommon Pavilion stage at Shoe Fest, held at Camp Shaw-Waw-Nas-See in rural Manteno.

MANTENO — Citing a rise in COVID-19 cases due to the delta variant, organizers of Shoe Fest in Manteno have announced they will require proof of vaccination for entrance to the festival.

All ticket holders for the three-day music and camping festival set for Sept. 3-5 will be required to show proof of full vaccination against COVID-19 or proof of a negative COVID-19 test result taken within 72 hours prior to entering Shoe Fest grounds at Camp Shaw-Waw-Nas-See in Manteno.

In an Aug. 12 announcement addressed to the “Shoe Family” via Facebook, organizers said, “Whereas we are trying to do our part in offering a safe space for all attendees, we understand and respect that we may not all land in the same place when it comes to viewing what that entails and how that looks.”

As such, organizers said that if ticket buyers are unable to adhere to these testing and vaccination requirements, they may request a refund by contacting info@shoe-fest.com. Refunds must be requested by 11:59 p.m. Aug. 17.

“We are looking forward to a really fun, safe and much-needed Shoe Fest,” organizers said in the announcement.

For more information on the festival, go to shoe-fest.com.

Peotone
One dead in Peotone fire

PEOTONE — One person was found dead in a structure fire early Saturday morning in Peotone, according to a press release from the Peotone Fire Protection District.

At approximately 12:22 a.m., PFPD responded to a reported structure fire in a multi-family apartment building at 501 S. Schroeder Ave., the release said.

The first units arrived within five minutes of the initial dispatch and crews reported smoke showing from the second floor, according to the release. Additional personnel and equipment were called.

As crews searched, they found a victim deceased in the bedroom, according to PFPD. The identity of the individual has not yet been released. A search of the remaining units confirmed no other people were inside.

Crews extinguished the fire and got the situation under control within 30 minutes, according to the release.

Fire damage was contained to the apartment, but smoke and water damage extended throughout the other apartments. The Red Cross is assisting with the displaced residents. 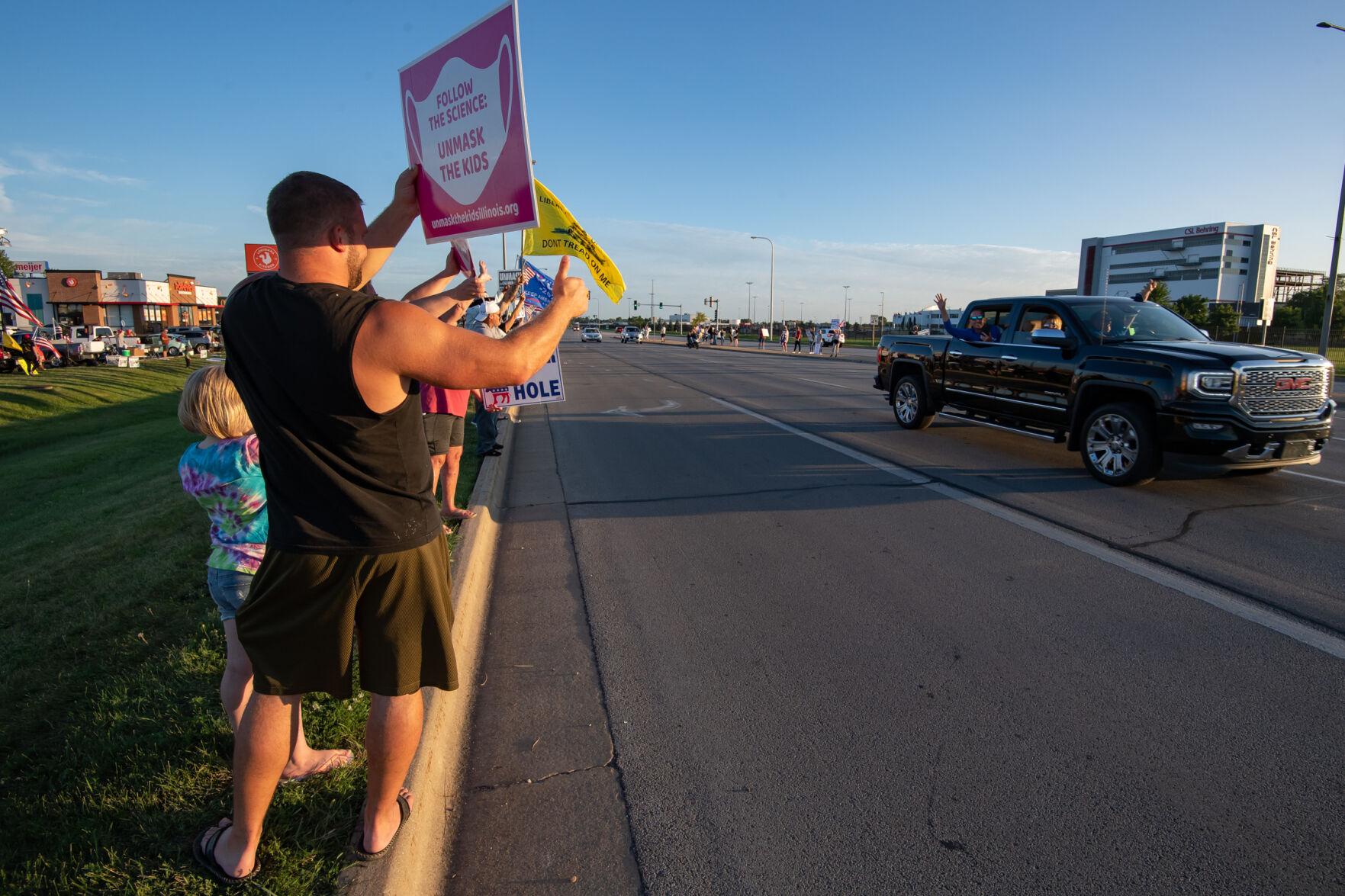 Pete Jennings, of Frankfort, gives a thumbs-up to a passing supporter.