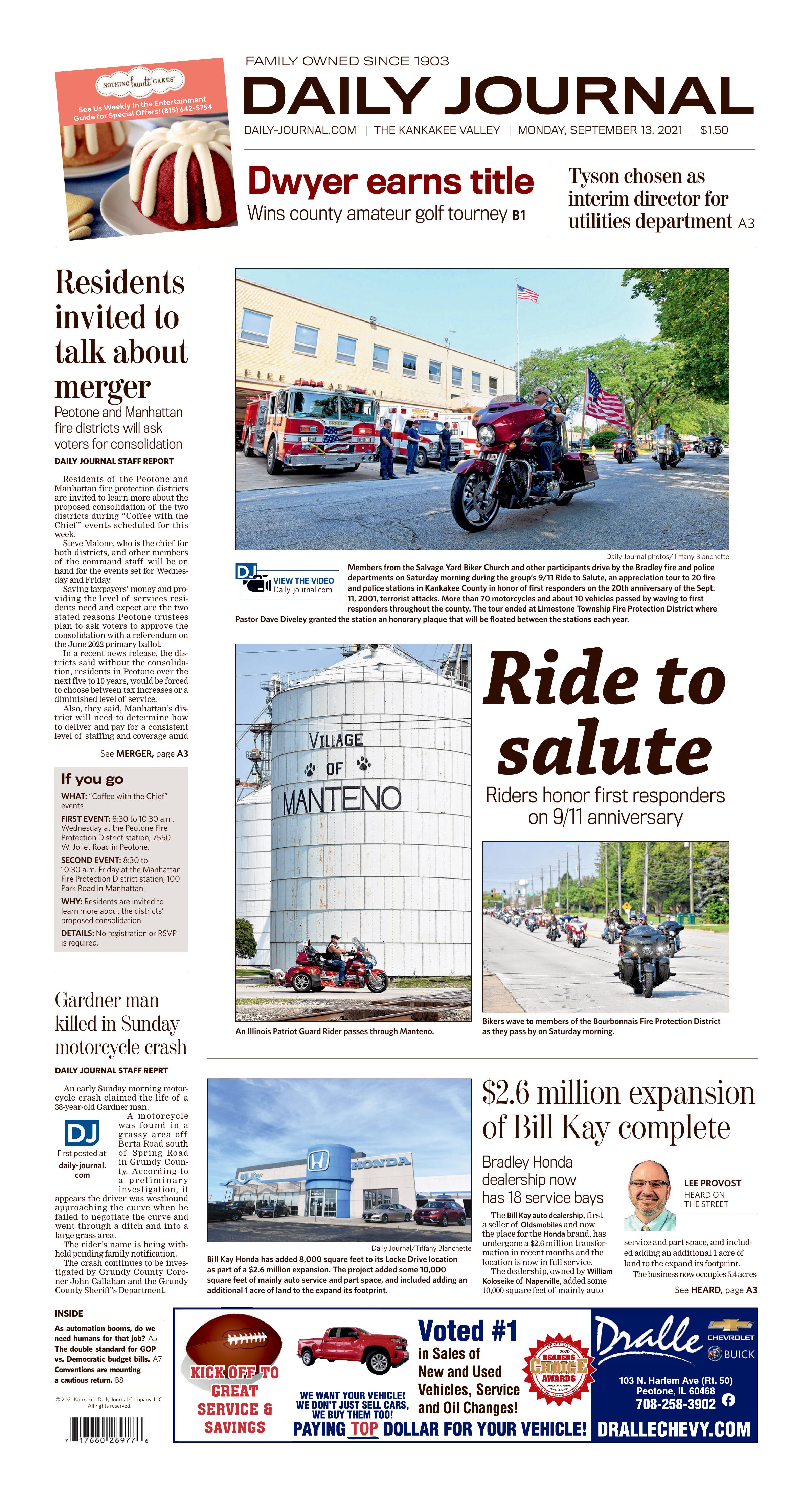 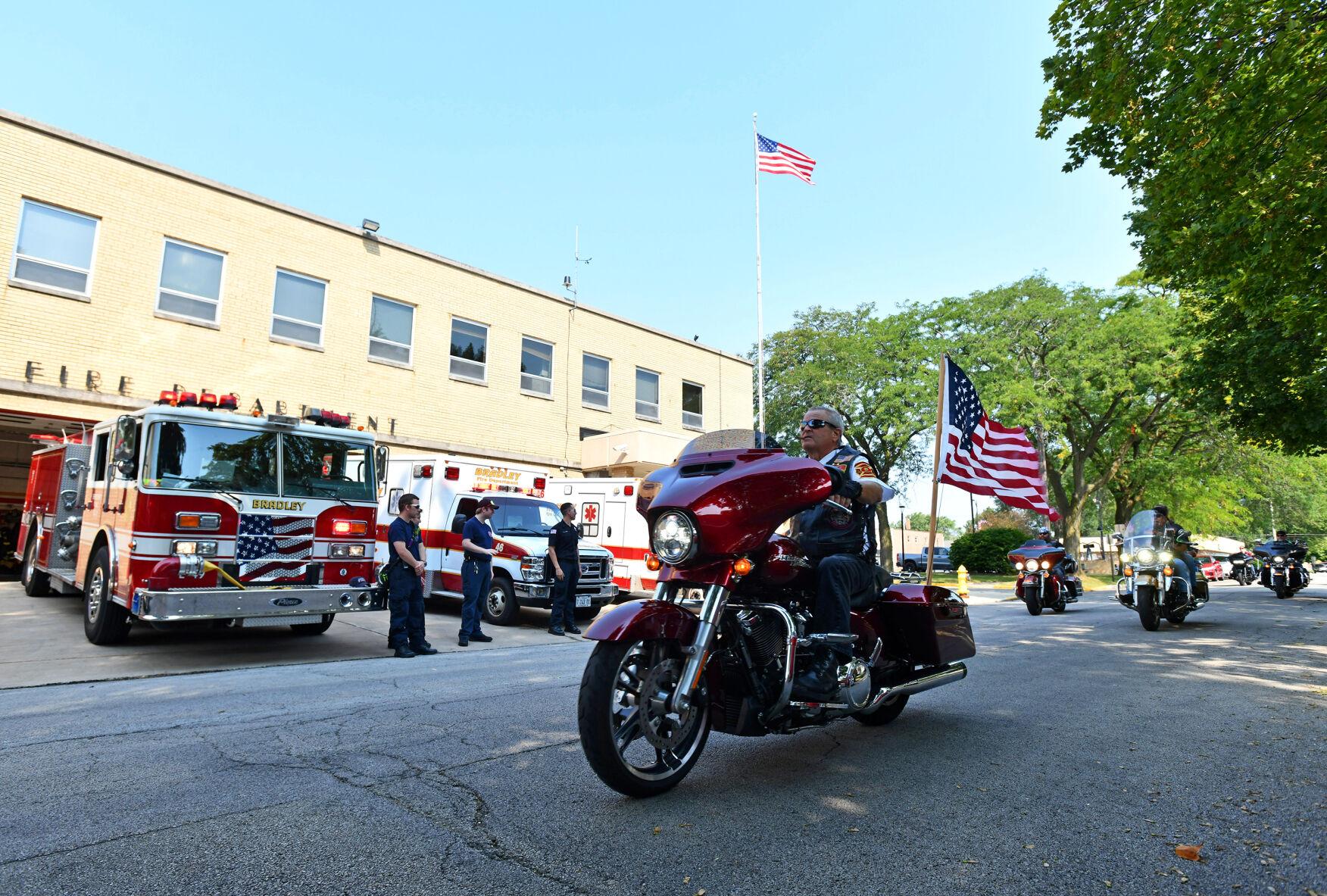 Members from the Salvage Yard Biker Church and other participants drive by the Bradley fire and police departments on Saturday morning during the group’s 9/11 Ride to Salute, an appreciation tour to 20 fire and police stations in Kankakee County in honor of first responders on the 20th anniversary of the Sept. 11, 2001, terrorist attacks. More than 70 motorcycles and about 10 vehicles passed by waving to first responders throughout the county. The tour ended at Limestone Township Fire Protection District where Pastor Dave Diveley granted the station an honorary plaque that will be floated between the stations each year. 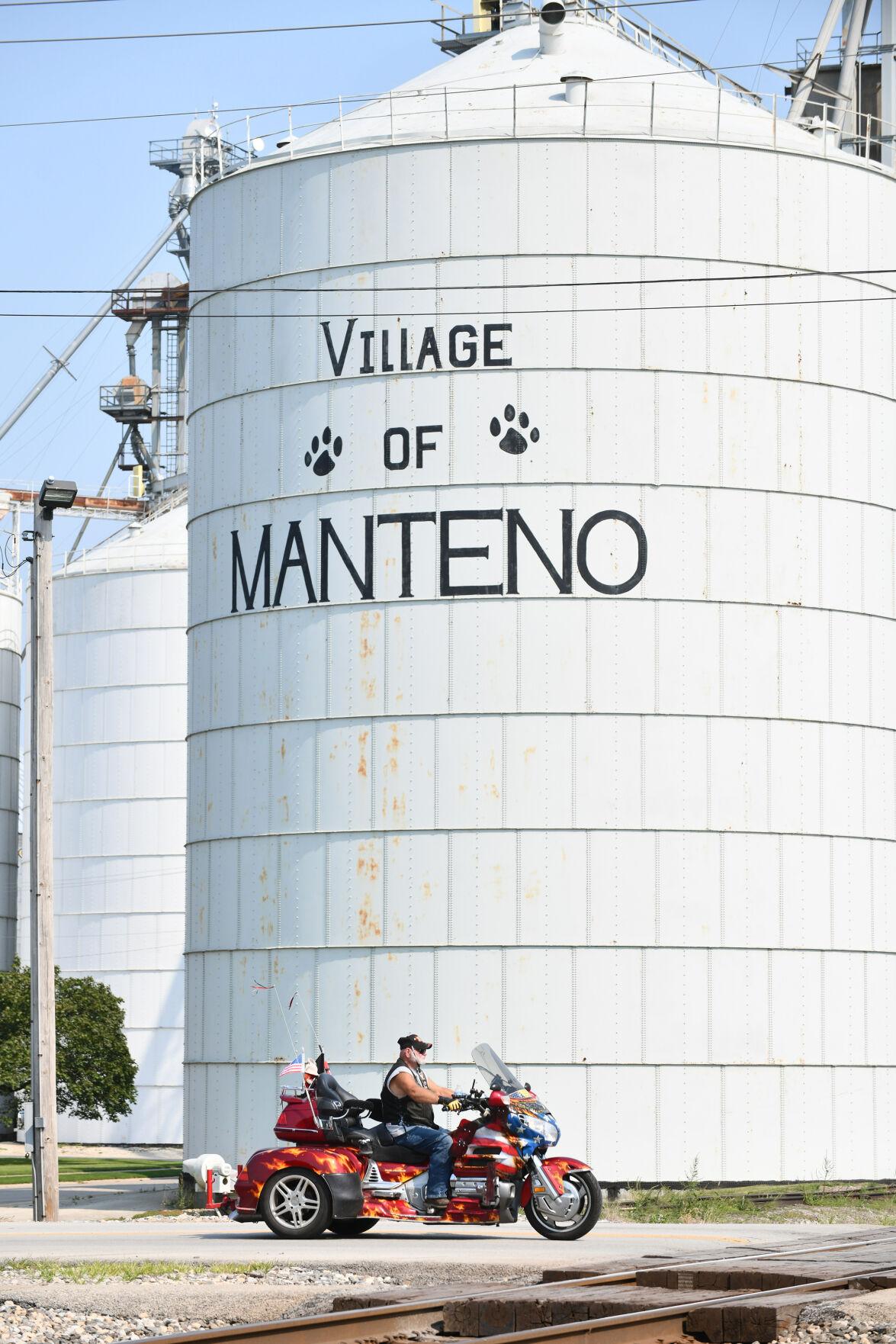 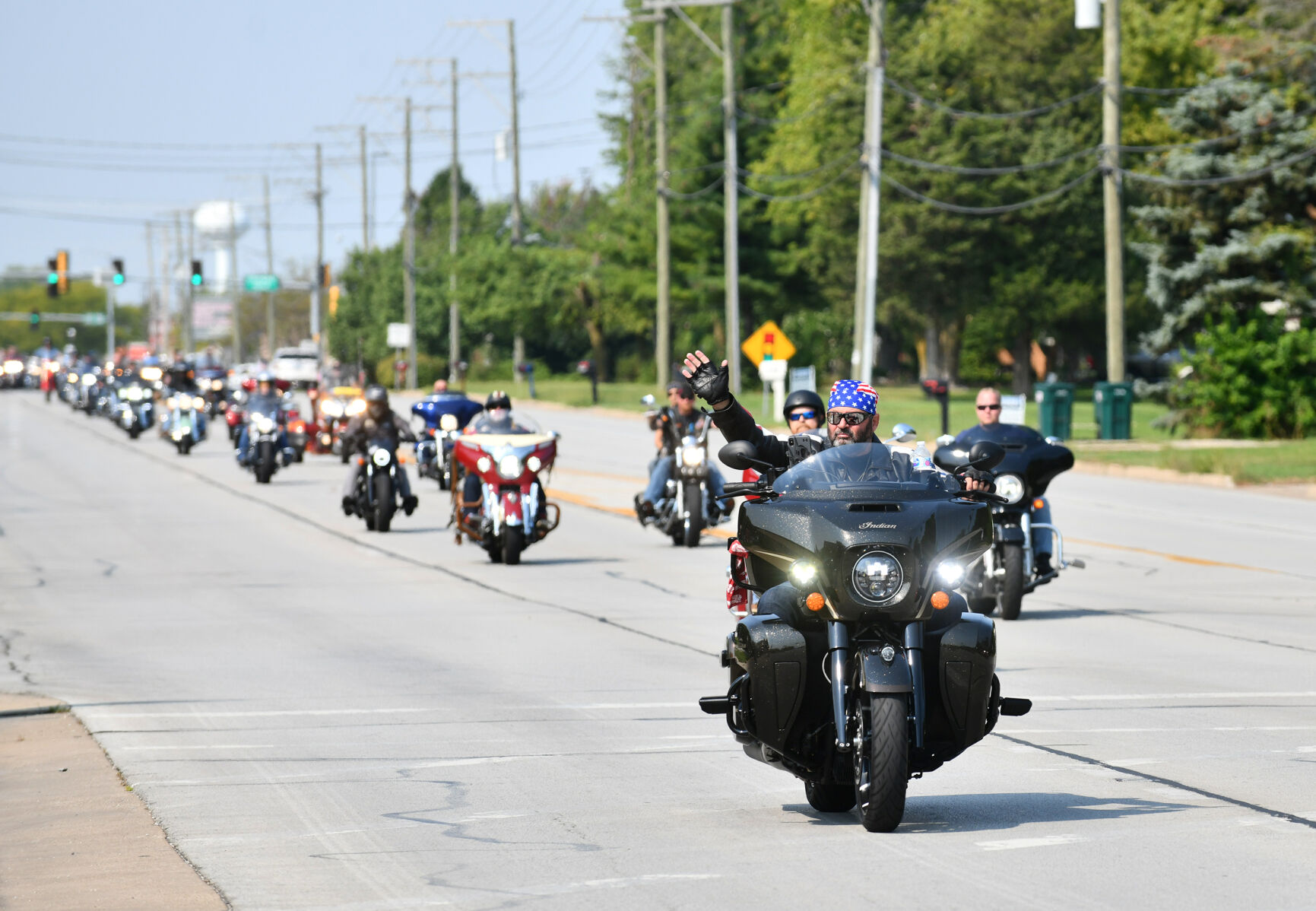 Bikers wave to members of the Bourbonnais Fire Protection District as they pass by on Saturday morning.

Bill Kay Honda has added 8,000 square feet to its Locke Drive location as part of a $2.6 million expansion. The project added some 10,000 square feet of mainly auto service and part space, and included adding an additional 1 acre of land to the expand its footprint.

The Bill Kay auto dealership, first a seller of Oldsmobiles and now the place for the Honda brand, has undergone a $2.6 million transformation in recent months and the location is now in full service.

The dealership, owned by William Koloseike of Naperville, added some 10,000 square feet of mainly auto service and part space, and included adding an additional 1 acre of land to the expand its footprint.

The business now occupies 5.4 acres at 1360 Locke Drive in Bourbonnais. The location has gone from eight service bays to 18, Koloseike said.

A point of clarification: The dealership goes by the name Bill Kay, Koloseike said, because people simply could not pronounce his name.

Back to the expansion.

Koloseike bought the Oldsmobile dealership, then near the corner of East North Street and Illinois 50 in 1994. Hondas were just beginning to become a major auto force in the Midwest.

The business moved from its Route 50 location to its present site along Locke Drive in April 2003.

Oldsmobiles, of course, are no longer produced. The automaker ceased operations in 2004 due to the fact the brand was no longer profitable.

But that didn’t stop Koloseike. He simply focused on expanding the Honda market in the Kankakee County region and it is one of the area’s most popular brands.

He said the dealership has a 50-person workforce here, under the direction of longtime General Manager Jeffrey Lindner, and as the expansion suggests, the business is doing quite well.

“We knew we needed space, especially for our service department,” Lindner said. “We were beyond our capacity.”

Lindner added that despite what the public may think, the year 2020 was one of the best years the dealership experienced.

The expansion was completed under the direction of Kankakee-based contractor Piggush-Simoneau Inc., under the leadership of Justin Goselin and project manager Jim Schnurr.

The project began in September 2020 and was completed in June.

Residents of the Peotone and Manhattan fire protection districts are invited to learn more about the proposed consolidation of the two districts during “Coffee with the Chief” events scheduled for this week.

Steve Malone, who is the chief for both districts, and other members of the command staff will be on hand for the events set for Wednesday and Friday.

Saving taxpayers’ money and providing the level of services residents need and expect are the two stated reasons Peotone trustees plan to ask voters to approve the consolidation with a referendum on the June 2022 primary ballot.

In a recent news release, the districts said without the consolidation, residents in Peotone over the next five to 10 years, would be forced to choose between tax increases or a diminished level of service.

Also, they said, Manhattan’s district will need to determine how to deliver and pay for a consistent level of staffing and coverage amid increasing demand for services as the region’s population — and calls for service — increase.

Already — as Aug. 13, 2020 — the two districts have an agreement in which Manhattan provides a fire chief, deputy chief, battalion chief and administrative staff. According to a press release, that agreement generated approximately $600,000 in cost recovery and savings in its first year.

By continuing and expanding their consolidation efforts, the districts say they will be able to further reduce administrative costs, eliminate duplicative costs and reinvest those dollars into hiring full-time firefighters and paramedics, and upgrade facilities and equipment.

“We’ve been pleased so far with the response that we’ve received from the [Peotone and Manhattan communities] about the potential benefits of consolidation,” Malone said in its latest press release about the proposed merger.

“But we also understand that there are likely residents who want to learn more about what a potential consolidation could mean for emergency fire, rescue and lifesaving services in their community. We’re happy to be on hand and available to answer questions or provide an overview to residents.”

Malone said questions on any other fire-related matters will be addressed at the event as well.

The Peotone event will be from 8:30 to 10:30 a.m. Wednesday at the Peotone Fire Protection District station, 7550 W. Joliet Road in Peotone.

The Manhattan event is scheduled for 8:30 to 10:30 a.m. Friday at the Manhattan Fire Protection District station, 100 Park Road in Manhattan.

No registration or RSVP is required.

WHAT: "Coffee with the Chief" events

WHY: Residents are invited to learn more about the districts' proposed consolidation.

DETAILS: No registration or RSVP is required.

Editor’s note: This report has been updated as police have released the victim’s name.

Police have released the name of a Gardner man killed early Sunday morning in a motorcycle crash.

Tyler E. O’Neill, 32, was pronounced dead at the scene of the crash in Grundy County. A motorcycle was found in a grassy area off Berta Road south of Spring Road in Grundy County. According to a preliminary investigation, it appears O’Neill was westbound approaching the curve when he failed to negotiate the curve and went through a ditch and into a large grass area.