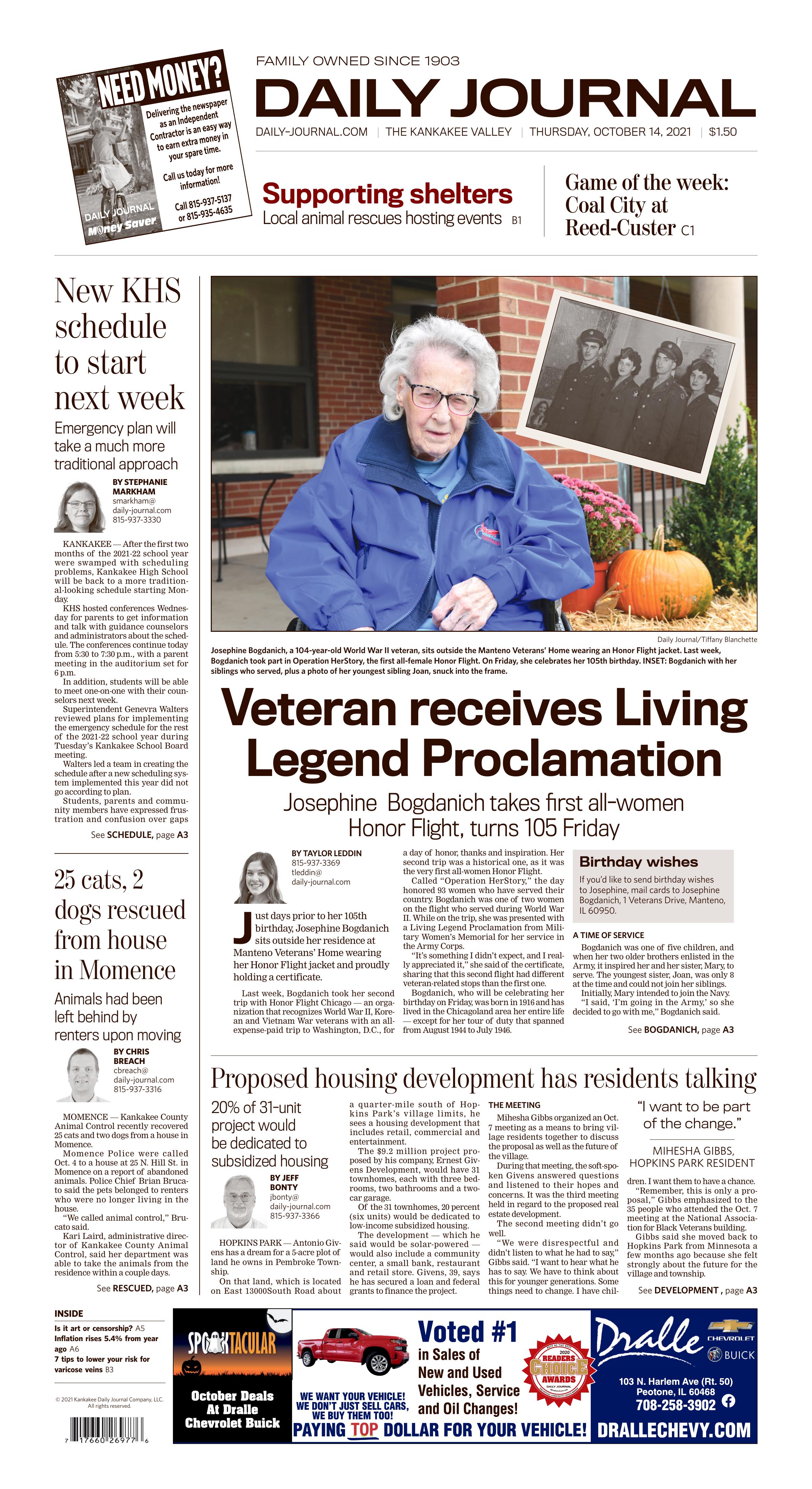 Just days prior to her 105th birthday, Josephine Bogdanich sits outside her residence at Manteno Veterans’ Home wearing her Honor Flight jacket and proudly holding a certificate.

Last week, Bogdanich took her second trip with Honor Flight Chicago — an organization that recognizes World War II, Korean and Vietnam War veterans with an all-expense-paid trip to Washington, D.C., for a day of honor, thanks and inspiration. Her second trip was a historical one, as it was the very first all-women Honor Flight.

Called “Operation HerStory,” the day honored 93 women who have served their country. Bogdanich was one of two women on the flight who served during World War II. While on the trip, she was presented with a Living Legend Proclamation from Military Women’s Memorial for her service in the Army Corps.

“It’s something I didn’t expect, and I really appreciated it,” she said of the certificate, sharing that this second flight had different veteran-related stops than the first one.

Bogdanich, who will be celebrating her birthday on Friday, was born in 1916 and has lived in the Chicagoland area her entire life — except for her tour of duty that spanned from August 1944 to July 1946.

A time of service

Bogdanich was one of five children, and when her two older brothers enlisted in the Army, it inspired her and her sister, Mary, to serve. The youngest sister, Joan, was only 8 at the time and could not join her siblings.

“I said, ‘I’m going in the Army,’ so she decided to go with me,” Bogdanich said.

The sisters were together for their first 13 weeks during basic training, then Bogdanich’s first base was at Selfridge Air National Guard Base near Mt. Clemens, Mich. She then moved to Texas where she was trained on the teletype and assigned to communications.

Shortly thereafter, Bogdanich was reassigned to Langley Air Force Base in Virginia, where the task was to develop detector equipment for anti-submarine warfare. She was assigned as a mail clerk and would distribute packages from home to servicemen.

After some time, she began to notice which servicemen weren’t often receiving mail — if ever. She then enlisted the help of her co-workers to write and seal letters for those servicemen.

When asked about her biggest accomplishments during her service, Bogdanich shared that she enjoyed her time in the mailroom and “more or less, helping each woman in our group.”

Following the end of the war, both she and Mary were discharged and were sent to Santa Monica, Calif. They took some time there for a vacation, prior to taking three buses and a streetcar back to their parents’ home in Chicago.

Bogdanich then returned to her position as a telephone operator at Illinois Bell Telephone Co. — where she worked prior to enlisting — before becoming an office worker with the Chicago and Western Indiana Railroad.

In 1959, she married Andrew Bogdanich and they had one son, Nicholas. The family lived in the Mt. Greenwood area up until she moved to the veterans’ home.

When discussing the Honor Flight, she encourages fellow veterans to apply for the program.

“You can see just about everything there possible,” she said. “If you get a chance to go, go.”

As for the milestone birthday, Bogdanich looks forward to spending the weekend with her son, who resides in Oak Lawn.

HOPKINS PARK — Antonio Givens has a dream for a 5-acre plot of land he owns in Pembroke Township.

On that land, which is located on East 13000South Road about a quarter-mile south of Hopkins Park’s village limits, he sees a housing development that includes retail, commercial and entertainment.

The $9.2 million project proposed by his company, Ernest Givens Development, would have 31 townhomes, each with three bedrooms, two bathrooms and a two-car garage.

Of the 31 townhomes, 20 percent (six units) would be dedicated to low-income subsidized housing.

The development — which he said would be solar-powered — would also include a community center, a small bank, restaurant and retail store. Givens, 39, says he has secured a loan and federal grants to finance the project.

Mihesha Gibbs organized an Oct. 7 meeting as a means to bring village residents together to discuss the proposal as well as the future of the village.

During that meeting, the soft-spoken Givens answered questions and listened to their hopes and concerns. It was the third meeting held in regard to the proposed real estate development.

“We were disrespectful and didn’t listen to what he had to say,” Gibbs said. “I want to hear what he has to say. We have to think about this for younger generations. Some things need to change. I have children. I want them to have a chance.

“Remember, this is only a proposal,” Gibbs emphasized to the 35 people who attended the Oct. 7 meeting at the National Association for Black Veterans building.

Gibbs said she moved back to Hopkins Park from Minnesota a few months ago because she felt strongly about the future for the village and township.

“I want to be part of the change,” she said.

That included her children, whose generation are the future of the village, she said.

“It’s about their generation and the one after that,” Gibbs said.

Givens said he is not new to business. He said he has run a restaurant, barber shop and beauty salon.

His company, Ernest Givens Development, is named after his father who passed away last year.

Givens said it was his father who gave him the idea to buy the land, which was being sold by his father’s best friend.

“My original idea was to build a house on the land to be able to come down here [from Chicago] and think,” Givens said. “Then I changed my thinking. These people need housing, and I dedicated this plan to my father.”

Givens said he has worked with a local engineering firm and architect to draw up the plans, and is hopeful to bring those before a governmental board soon.

Givens first thought the governmental entity he would work with would be the village but has since learned the property comes under Kankakee County jurisdiction. The land is currently zoned for agriculture.

Hopkins Park Mayor Hodge said the village is willing to talk about annexing the property into the village.

“Right now, there are no plans or public hearings,” said Hodge, adding that there are many steps to be taken before the project would get off the ground. “We are putting the cart before the horse. I came here tonight to listen to the plans.”

He said the original proposal called for 90-plus residences, which Hodge called “too big.”

“He came back with this new proposal, and I think it is a good one,” he said.

There were many questions from residents who attended the Oct. 7 meeting. Topics addressed include funding sources, job creation possibilities and the possible relocation of the plan. The proposed new location was 137 acres in the eastern part of the village that already has sewer and water.

That property was purchased from the state of Illinois, according to Pembroke Township Supervisor Sam Payton, who is also a Kankakee County Board member.

Resident Stephanie Hammond said after the meeting that the village needs to address improving its infrastructure before going forward with a project like the one proposed by Givens.

Hammond talked about sidewalks and curbs as well as street lighting. Upgrading the village’s sewage system is needed as well, she said.

“We need to get this done first,” she said.

But, Hodge said, younger residents are leaving the village because of a lack of amenities.

“Our children are moving to Kankakee, St. Anne and Momence because they do not have the amenities like those communities,” Hodge said.

Momence Police were called Oct. 4 to a house at 25 N. Hill St. in Momence on a report of abandoned animals. Police Chief Brian Brucato said the pets belonged to renters who were no longer living in the house.

Kari Laird, administrative director of Kankakee County Animal Control, said her department was able to take the animals from the residence within a couple days.

“They were surrendered to us by the owner and have been sent to rescue,” she said. “There was a caretaker who was supposed to take care of the pets, but the owner did allow animal control to take the cats and dogs.”

“We dewormed them and did an initial assessment,” she said. “They were given rabies shots and additional minor treatments.”

Laird said the animals were then given to rescue facilities outside of the county.

“They were able to accept all the cats,” she said. “They find homes for them after they are spayed or neutered, and then are able to be adopted.”

Laird said the rescue facilities were in DeKalb and Chicago.

The two dogs are still with Kankakee County Animal Control, and Laird is hopeful they will also be able to be sent to a rescue shelter soon.