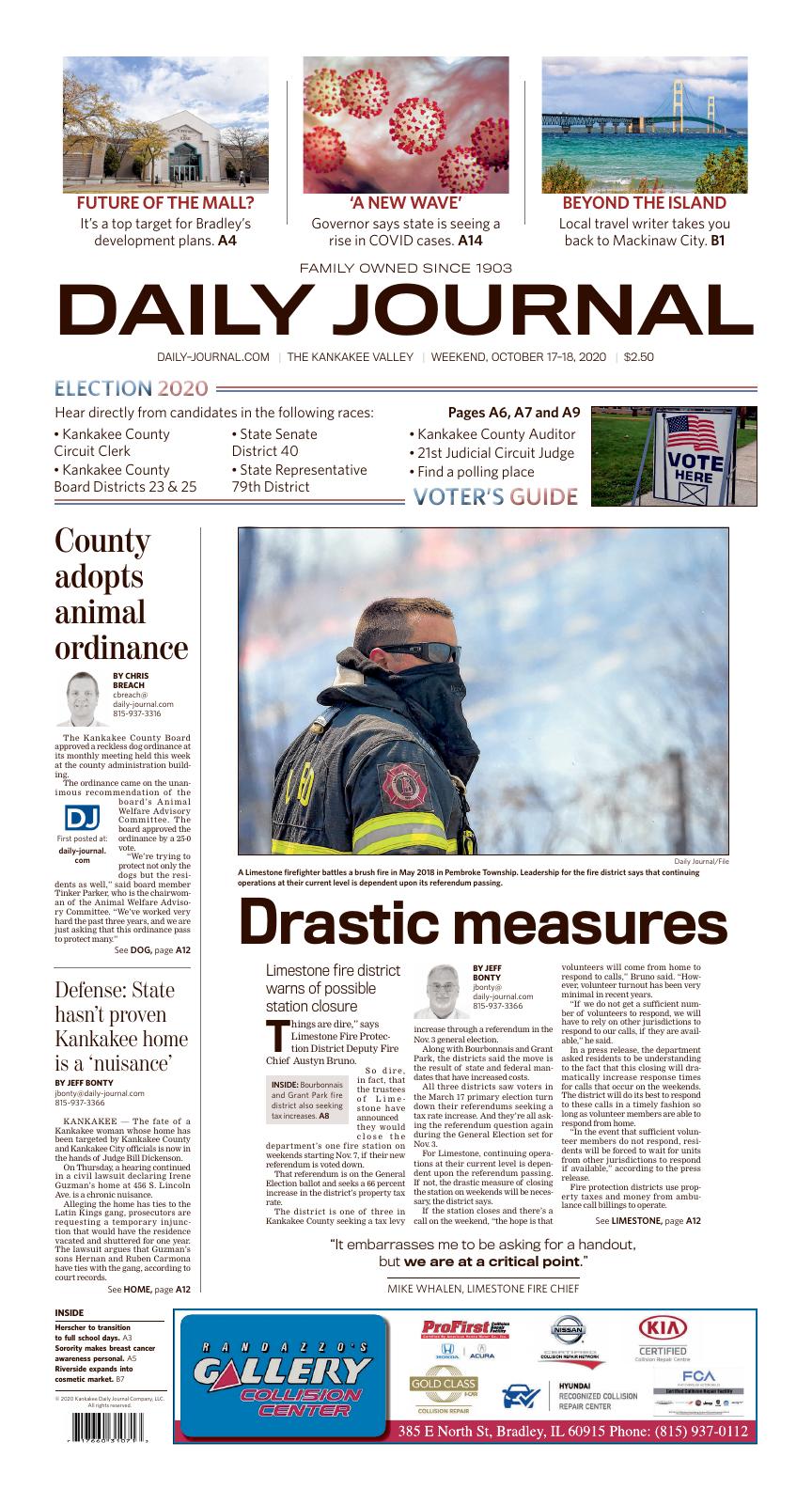 A Limestone firefighter battles a brush fire in May 2018 in Pembroke Township. Leadership for the fire district says that continuing operations at their current level is dependent upon its referendum passing.

So dire, in fact, that the trustees of Limestone have announced they would close the department’s one fire station on weekends starting Nov. 7, if their new referendum is voted down.

That referendum is on the General Election ballot and seeks a 66 percent increase in the district’s property tax rate.

The district is one of three in Kankakee County seeking a tax levy increase through a referendum in the Nov. 3 general election.

Along with Bourbonnais and Grant Park, the districts said the move is the result of state and federal mandates that have increased costs.

All three districts saw voters in the March 17 primary election turn down their referendums seeking a tax rate increase. And they’re all asking the referendum question again during the General Election set for Nov. 3.

For Limestone, continuing operations at their current level is dependent upon the referendum passing. If not, the drastic measure of closing the station on weekends will be necessary, the district says.

If the station closes and there’s a call on the weekend, “the hope is that volunteers will come from home to respond to calls,” Bruno said. “However, volunteer turnout has been very minimal in recent years.

“If we do not get a sufficient number of volunteers to respond, we will have to rely on other jurisdictions to respond to our calls, if they are available,” he said.

In a press release, the department asked residents to be understanding to the fact that this closing will dramatically increase response times for calls that occur on the weekends. The district will do its best to respond to these calls in a timely fashion so long as volunteer members are able to respond from home.

“In the event that sufficient volunteer members do not respond, residents will be forced to wait for units from other jurisdictions to respond if available,” according to the press release.

Limestone’s referendum is asking for a 66 percent increase in its property tax rate. The increase is only for two years and then the tax rate reverts back to the old rate, per state law.

For a median house in Limestone Township valued at $172,800, the owners would see their bill go from $338 to $564 per year — a 66 percent increase. The tax increase would expire in two years.

Since the defeat of the March referendum, the department has made several attempts to improve its fiscal situation. Those efforts include the liquidation of a brush/rescue truck, a utility vehicle and a fire engine. They’ve reduced and eliminated tuition reimbursement for essential classes. The minimum staffing level has been reduced from three personnel to two. And, all salary raises have been suspended.

“These attempts, however, have fallen short and have left the fire district unable to continue to provide emergency services at the level we have done in the past,” the release said.

“I get it,” said Limestone Fire Protection District Chief Mike Whalen of the March referendum’s defeat. “We are taxed so much in this state. It embarrasses me to be asking for a handout, but we are at a critical point.”

“It embarrasses me to be asking for a handout, but we are at a critical point.”

The Kankakee County Board approved a reckless dog ordinance at its monthly meeting held this week at the county administration building.

The ordinance came on the unanimous recommendation of the board’s Animal Welfare Advisory Committee. The board approved the ordinance by a 25-0 vote.

“We’re trying to protect not only the dogs but the residents as well,” said board member Tinker Parker, who is the chairwoman of the Animal Welfare Advisory Committee. “We’ve worked very hard the past three years, and we are just asking that this ordinance pass to protect many.”

Chapter 10 of the Kankakee County Municipal Code deals with animals, and violations of the section are not limited to animal bites and impoundment of dogs; inhumane or cruel treatment and animal nuisances and trespasses.

“We want to make sure that the dogs that are abused are protected by the county,” Parker said. “Hopefully, we’ll be able to prevent those owners from having a dog or harboring a dog once they’ve been fined or charged with violations of this code.”

The ordinance also defines a violation as “a conviction, including a judicial finding of guilt for any reason of the offenses under chapter 10 relating to dogs; a guilty plea, entered in judicial court to any of the offenses; any impoundment of any dog; multiple offenses on the same day at the same time for the same owner will only count as one violation. The violations need not involve the same dog.”

Parker said the animal control administrator will conduct an investigation supported by witnesses statements, photographs, animal control records and other evidence once it has been notified. Then the owner would be notified by certified mail of the violations, and a hearing by criminal justice committee would be held to determine if the person is guilty.

The criminal justice committee can impose of fine of not less than $250 nor more than $750 and order that all dogs in the owner’s possession be impounded by animal control.

“I was big on due process on this,” Board Chairman Andy Wheeler said. “I didn’t want one appointed official to be able to deem somebody a reckless dog owner.”

Any dog impounded, the animal control administrator will determine if and when dogs can be returned to the owner. The owner has a right to appeal.

Parker said she was very passionate about the measure and worked with the State’s Attorney’s office to write the ordinance.

“We don’t want dogs that have been abused to go back into that environment,” Parker said. “We’re protecting the dog, but also giving the owner the right to appeal and maybe change their behavior. It is protecting the animal.”

The ordinance only applies to areas in the county not governed by a city, town or village that has its own animal ordinances.

A home in the 400 block of South Lincoln Avenue in Kankakee is under scrutiny in the courts.

KANKAKEE — The fate of a Kankakee woman whose home has been targeted by Kankakee County and Kankakee City officials is now in the hands of Judge Bill Dickenson.

On Thursday, a hearing continued in a civil lawsuit declaring Irene Guzman’s home at 456 S. Lincoln Ave. is a chronic nuisance.

Alleging the home has ties to the Latin Kings gang, prosecutors are requesting a temporary injunction that would have the residence vacated and shuttered for one year. The lawsuit argues that Guzman’s sons Hernan and Ruben Carmona have ties with the gang, according to court records.

Guzman’s attorney, Eric Davis, argued Thursday that the prosecution had not met its burden of proof in the case. He said that Guzman has not been involved in several shootings that have occurred in the 400 block of South Lincoln.

In fact, he argued, Guzman’s house has been hit by gunfire.

Before closing arguments, Davis had three witnesses testify. All three live in the same block as Guzman’s residence.

One witness was sitting on the porch of a nearby house when shooting occurred on Sept. 16, 2019, that endangered students on a school bus. That day, an Illinois Central School bus preparing to stop and let Kankakee school district students off was on the block when a rival gang member, Thomas Rebmann Jr., fired shots at the Guzman home with several people in the front yard, according to court records.

The witness said she saw Rebmann fire the shots and get back in the car that sped off. She testified that she did not see Ruben Carmona return fire.

The witness said they did not talk to the police and that police did not attempt to speak to her.

Both Rebmann and Carmona have been arrested and charged with aggravated discharge of a firearm in the incident.

Another witness testified seeing two men shoot at a car Rueben Carmona was in on Dec. 2, 2019. After the shooting, Carmona walked into Guzman’s house.

Kankakee County Assistant State’s Attorney Jonathan Watson argued the state had made its case by showing that there were several shootings that occurred in the block that were targeting Guzman’s home.

“We have heard testimony that the hierarchy of the Latin Kings in Kankakee has used the house, including holding meetings in the garage,” Watson said of testimony presented in court on Oct. 1. “We had an officer testify this home is considered the epicenter for the Latin Kings.”

City and county nuisance abatement ordinances allow for the closing of a house deemed a chronic public nuisance by a judge.

The city’s code enforcement department can deem a residence uninhabitable. If that happens, the owner must bring the building up to code as well as pay any outstanding fines, fees and taxes in order to allow people to live in the home again.

The judge’s decision is expected to come Oct. 22. 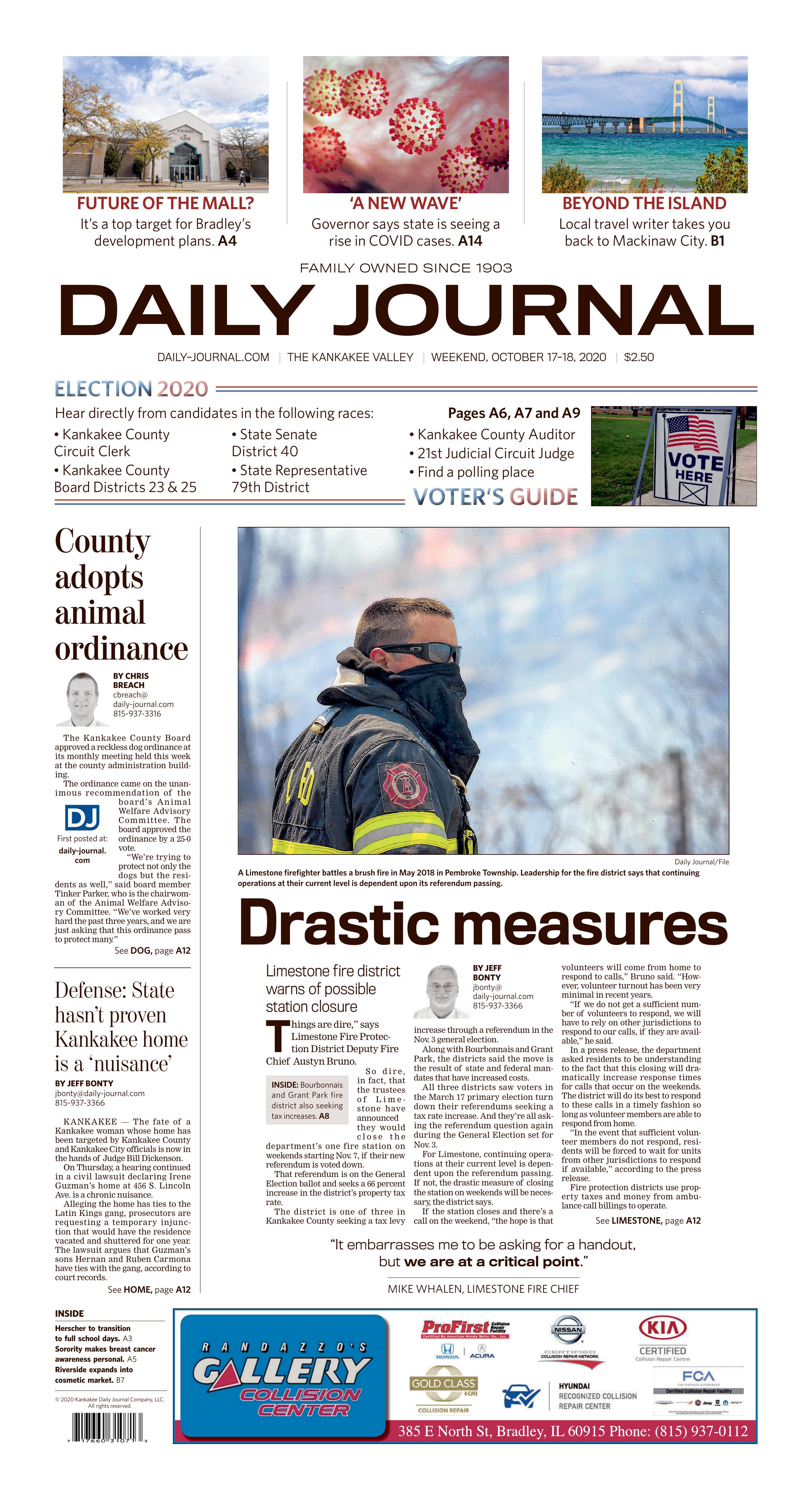