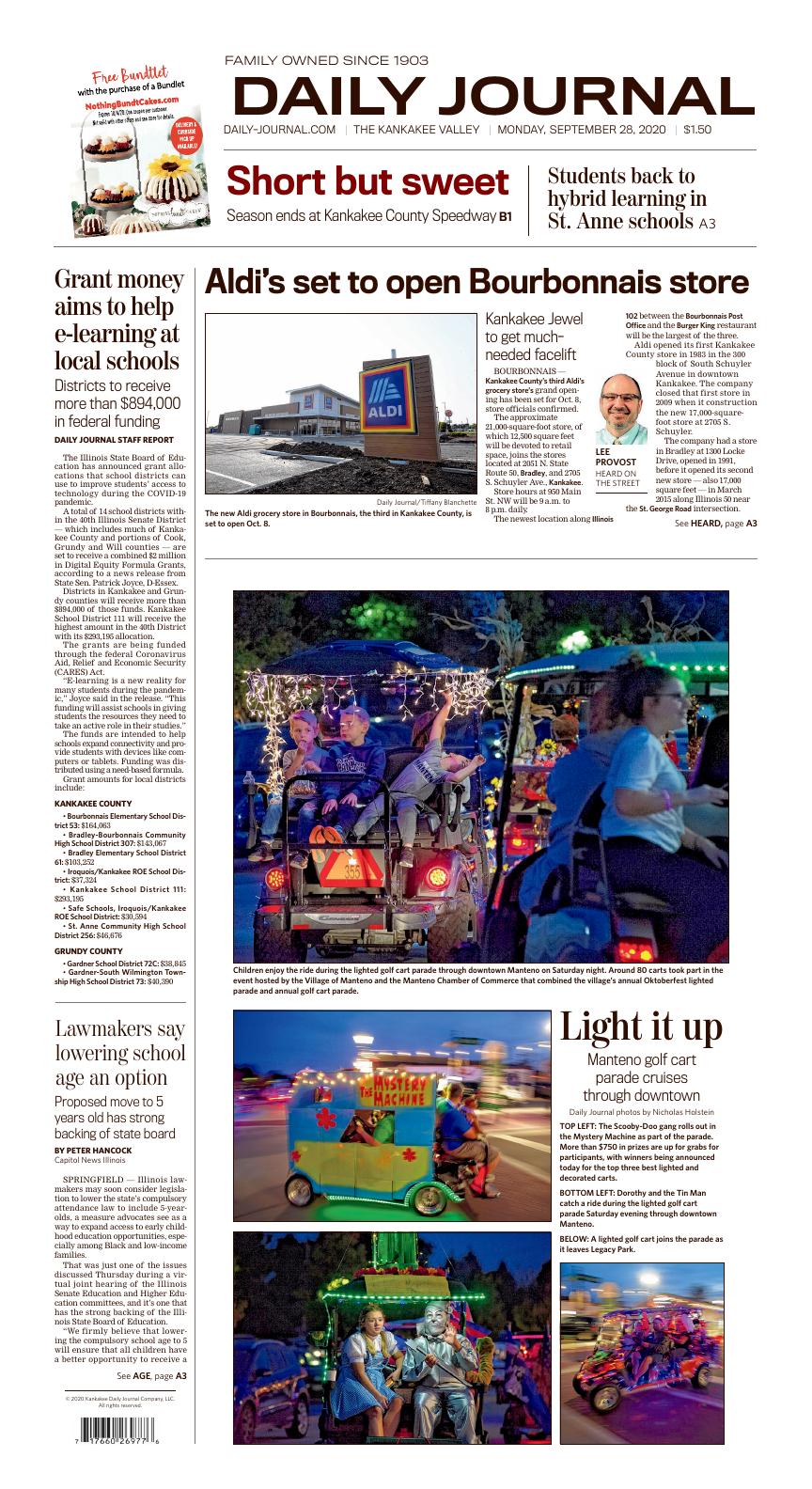 The new Aldi grocery store in Bourbonnais, the third in Kankakee County, is set to open Oct. 8.

The newest location along Illinois 102 between the Bourbonnais Post Office and the Burger King restaurant will be the largest of the three.

Aldi opened its first Kankakee County store in 1983 in the 300 block of South Schuyler Avenue in downtown Kankakee. The company closed that first store in 2009 when it construction the new 17,000-square-foot store at 2705 S. Schuyler.

Construction on the third store here began with a March 2020 groundbreaking.

The newest store, located on a 3.5-acre parcel, will likely capitalize on the growing Bourbonnais population in that area as well as shoppers traveling along Illinois 113 and the Warner Bridge Road and Career Center Road regions.

The third Aldi stores only further demonstrates the company’s success in Kankakee County and intensifies the battle for grocery shoppers in the Bradley/Bourbonnais area. In addition to Aldi, there is a Jewel store also located along Main St. NW as well as a Kroger store only a short distance away along Armour Road near the Convent Street intersection.

There is a Super Walmart store only across the street from the Bradley Aldi store as well as the popular Meijer grocery store along Route 50, just north of the Lowe’s hardware store. The Target store in Bradley also has an expansive grocery section.

While on the subject of grocery stores, Kankakee Mayor Chasity Wells-Armstrong stated at last week’s Kankakee City Council meeting that the Jewel store, 446 S. Washington Ave., is in the process of getting a building permit and will be starting a $500,000 upgrade to this store this fall.

The store will have significant interior upgrades completed. In addition, some departments will be moved around, but specifics on this were not available. Work is already underway and the project is expected to be finished before the end of the year. The store will remain open during the rehab project.

Once the dominant grocery destination within the metro region, this store — which employs about 100 — has for far too long been ignored by its corporate leadership and its appearance — inside and out — is a reflection of its deferred maintenance.

At the most recent council meeting, Wells-Armstrong said Jewel management stated they want to be good partners with the city. Let’s hope that statement is true and that the planned upgrades prove it. 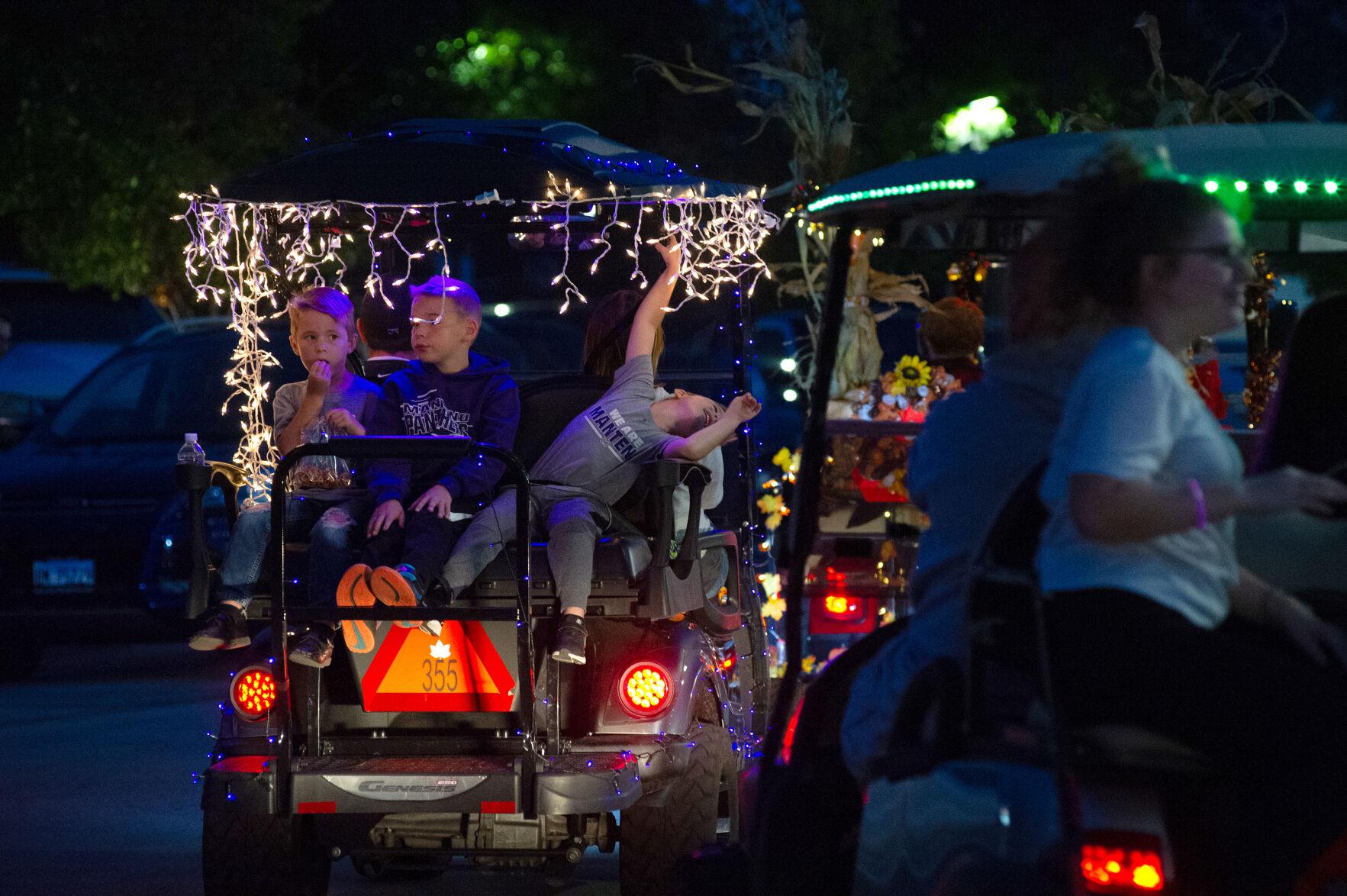 Children enjoy the ride during the lighted golf cart parade through downtown Manteno on Saturday night. Around 80 carts took part in the event hosted by the Village of Manteno and the Manteno Chamber of Commerce that combined the village’s annual Oktoberfest lighted parade and annual golf cart parade. 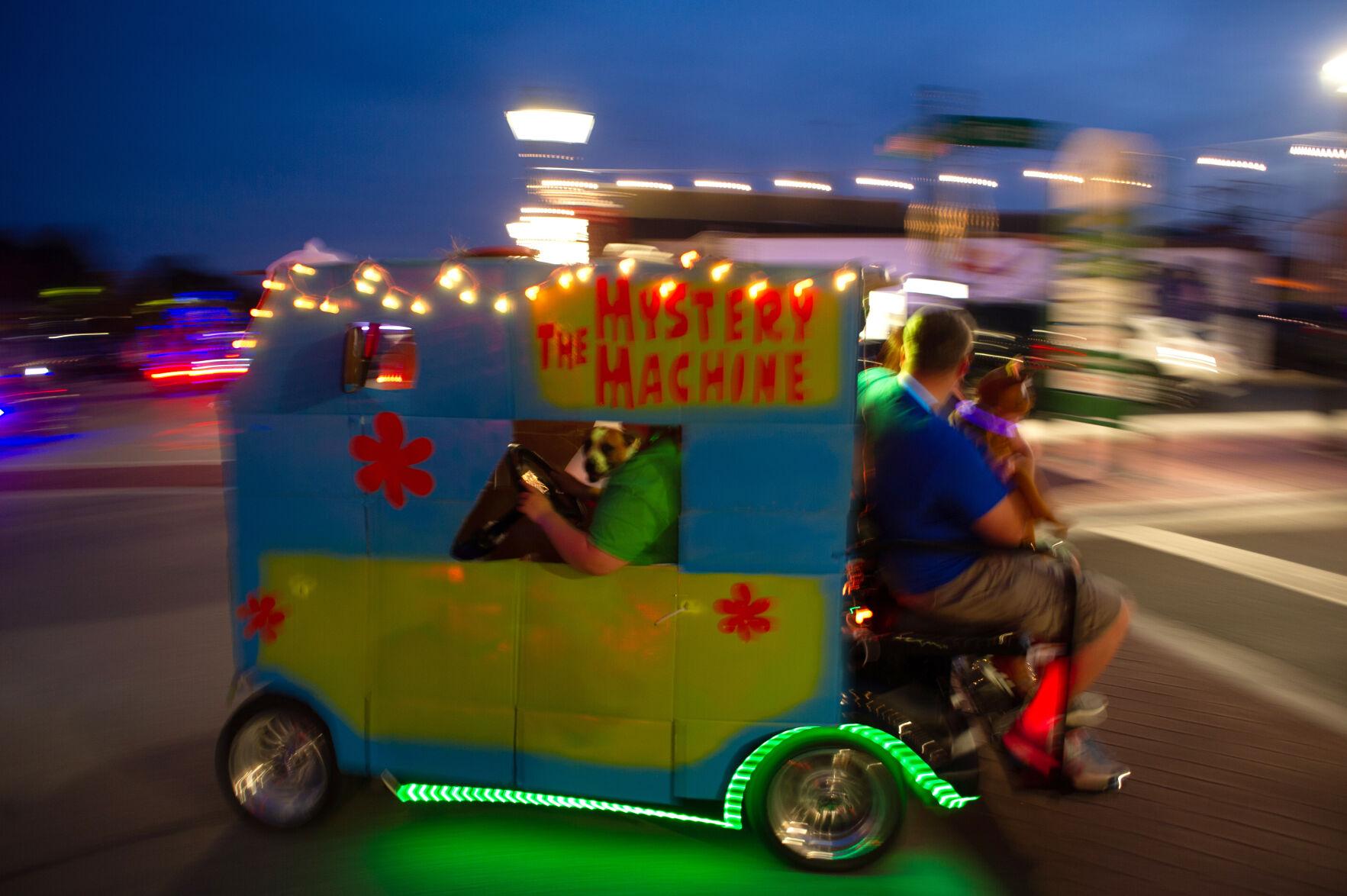 The Scooby-Doo gang rolls out in the Mystery Machine as part of the parade. More than $750 in prizes are up for grabs for participants, with winners being announced today for the top three best lighted and decorated carts. 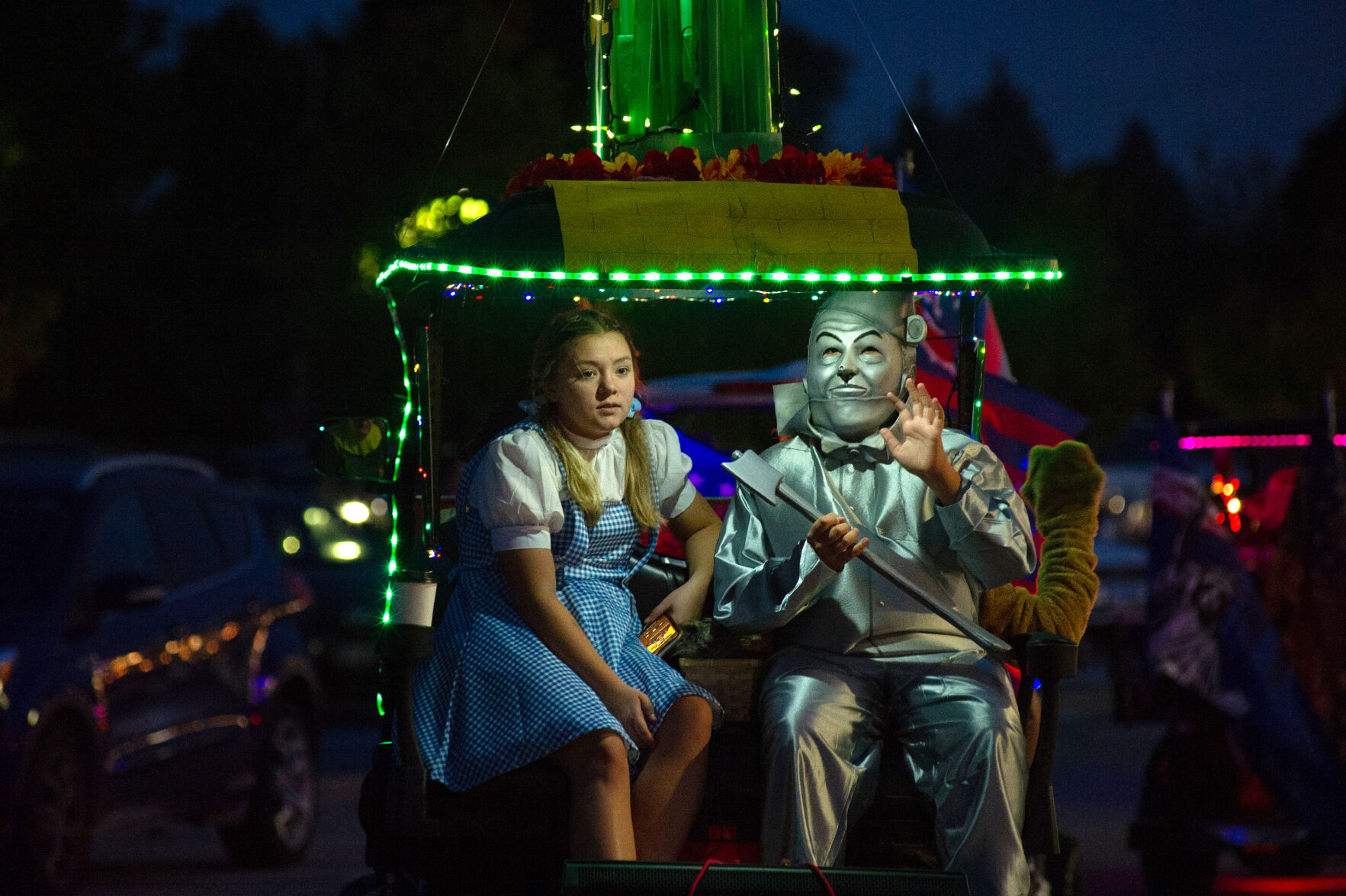 Dorothy and the Tin Man catch a ride during the lighted golf cart parade Saturday evening through downtown Manteno. 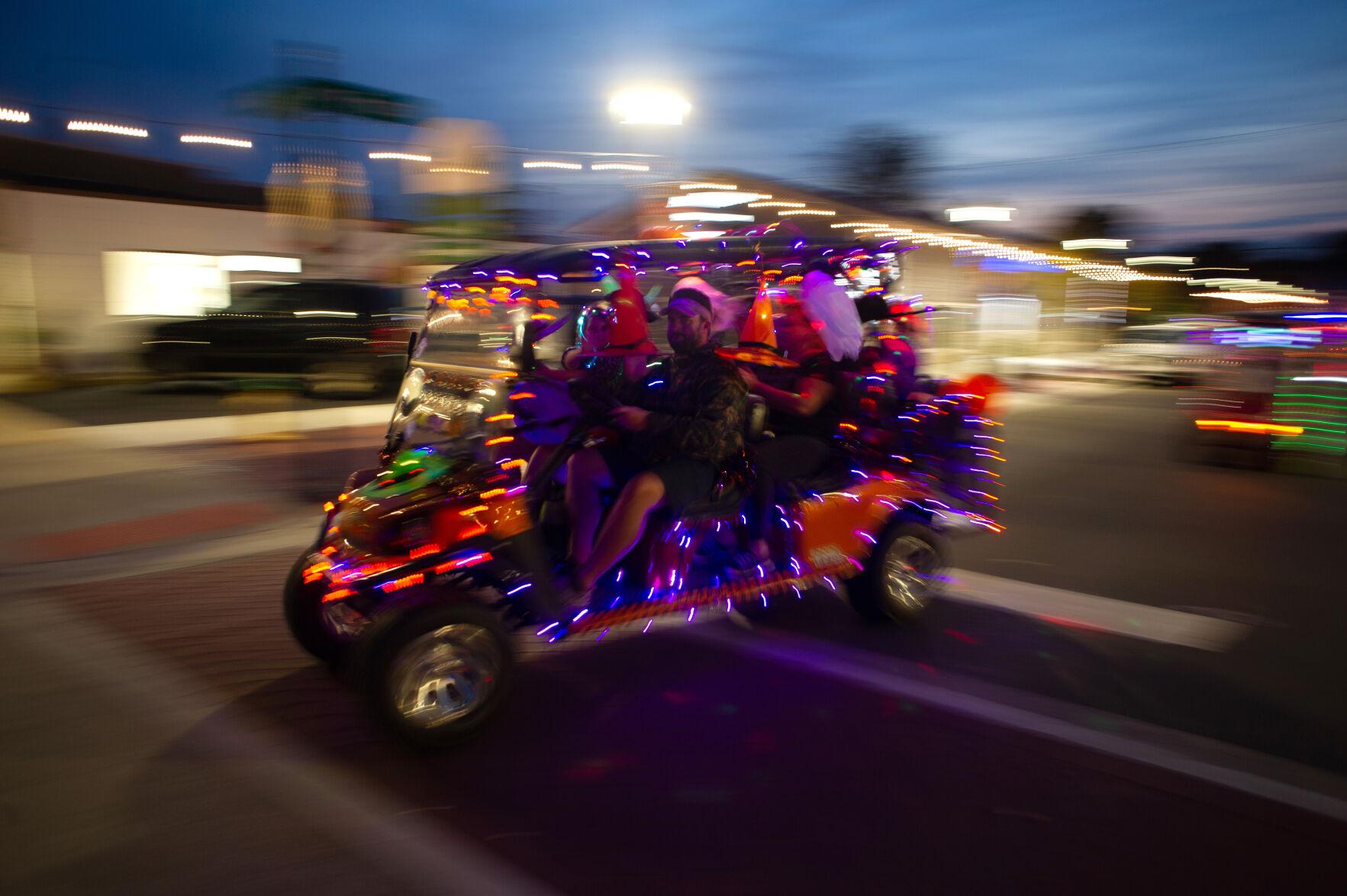 The Illinois State Board of Education has announced grant allocations that school districts can use to improve students’ access to technology during the COVID-19 pandemic.

A total of 14 school districts within the 40th Illinois Senate District — which includes much of Kankakee County and portions of Cook, Grundy and Will counties — are set to receive a combined $2 million in Digital Equity Formula Grants, according to a news release from State Sen. Patrick Joyce, D-Essex.

Districts in Kankakee and Grundy counties will receive more than $894,000 of those funds. Kankakee School District 111 will receive the highest amount in the 40th District with its $293,195 allocation.

The grants are being funded through the federal Coronavirus Aid, Relief and Economic Security (CARES) Act.

“E-learning is a new reality for many students during the pandemic,” Joyce said in the release. “This funding will assist schools in giving students the resources they need to take an active role in their studies.”

The funds are intended to help schools expand connectivity and provide students with devices like computers or tablets. Funding was distributed using a need-based formula.

Grant amounts for local districts include:

Representatives from Presence St. Mary’s Hospital visited Shabbona Elementary School on March 22 to help the kindergarten class color personal ‘Get Well’ cards, which will be distributed to hospital patients. Students also learned about the variety of jobs within the hospital through a quick lesson from the staff.

SPRINGFIELD — Illinois lawmakers may soon consider legislation to lower the state’s compulsory attendance law to include 5-year-olds, a measure advocates see as a way to expand access to early childhood education opportunities, especially among Black and low-income families.

“We firmly believe that lowering the compulsory school age to 5 will ensure that all children have a better opportunity to receive a strong foundation of literacy and reading skills that will set them up for success in all aspects of their lives,” Brenda Dixon, ISBE’s chief research and evaluation director, said during the hearing that was conducted via Zoom.

Currently, Illinois only requires children between the ages of 6 and 17 to attend school, which effectively makes kindergarten optional. Currently, Dixon said, about 130,000 children attend kindergarten in Illinois public schools, but lowering the compulsory attendance age to 5 could boost that number by as many as 3,000, or 2.3 percent.

“We believe lowering the compulsory school age to 5 will support more equitable educational opportunities for our youngest learners, and build on the state’s investment in early childhood education,” Dixon said. “Kindergarten for all will strengthen the learning continuum for Illinois students.”

Thursday’s hearing was just one in a series of hearings that the Illinois Legislative Black Caucus has called to discuss issues surrounding racial inequities. Earlier this month, the ILBC said it was developing a legislative agenda for racial equity that would be based on four “pillars.”

Besides education and workforce development, which was the subject of Thursday’s hearing, the other pillars include criminal justice reform; economic access, equity and opportunity; and health care and human services.

Dixon noted that students who don’t start school until the first grade are at an immediate disadvantage with their peers who went to kindergarten, and they rarely get the opportunity to catch up.

“There is no catch-up time built into our school calendar for children who enter the public school system underprepared,” she said. “Once established, gaps in school readiness skills are difficult and costly to remedy, leading to pronounced gaps in achievement. We firmly believe that lowering the compulsory school age to 5 will ensure that all children have a better opportunity to receive a strong foundation of literacy and reading skills that will set them up for success in all aspects of their lives.”

Christopher Span, a researcher and associate dean at the University of Illinois Urbana-Champaign’s College of Education, said that for most of America’s history, Black children were specifically excluded from access to public education, even after the landmark 1954 U.S. Supreme Court case Brown vs. Topeka Board of Education.

“One thing that I was able to kind of show in my research is that as schooling became more compulsory, you saw African-Americans close the gap in what we call gaps of achievement in school communities,” he said. “And we also see it with regards to the closing of the gap in terms of educational attainment — so, gaining access to high school, gaining access to college degrees.”

While there appeared to be broad support among educators for lowering the mandatory school age in order to expand access to kindergarten, there was much less support for the one of the other proposals being considered — a requirement that students be held back in the third grade if, by the end of that year, they still are not meeting state standards for reading and math skills.

It is often said among educators that from kindergarten through third grade, students learn to read, and from fourth grade on, they read to learn. That means students who enter fourth grade without the reading skills needed for fourth-grade work are likely to fall further and further behind for the rest of their time in school.

But Dixon and others said mandatory retention policies have been shown to do more harm than good.

Dixon said if that policy were in place today, based on the most recent state assessments, 85,000 to 90,000 third-graders, or 72 percent, would be held back from going on to fourth grade. Of those, roughly 80 percent are Black and brown students, and 85 percent are from low-income families.

“What is most important when it comes to the policy on third grade retention is what we do the years preceding third grade,” Dixon said.

The two committees are scheduled to hold another joint hearing on Wednesday, Sept. 30. The subjects of that hearing will be COVID-19 responses in K-12 education and equitable funding.{span class=”print_trim”}

“There is no catch-up time built into our school calendar for children who enter the public school system underprepared." 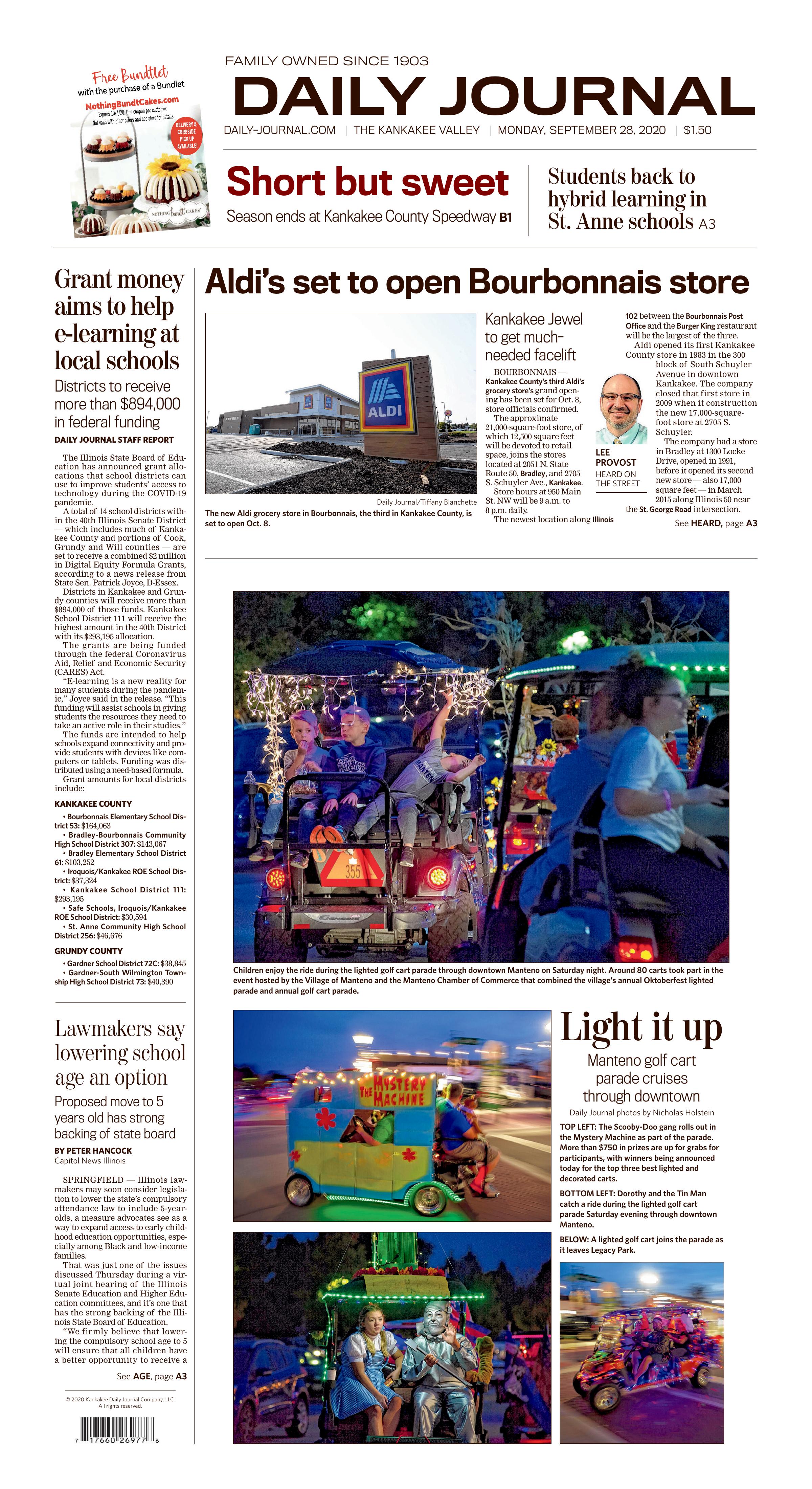