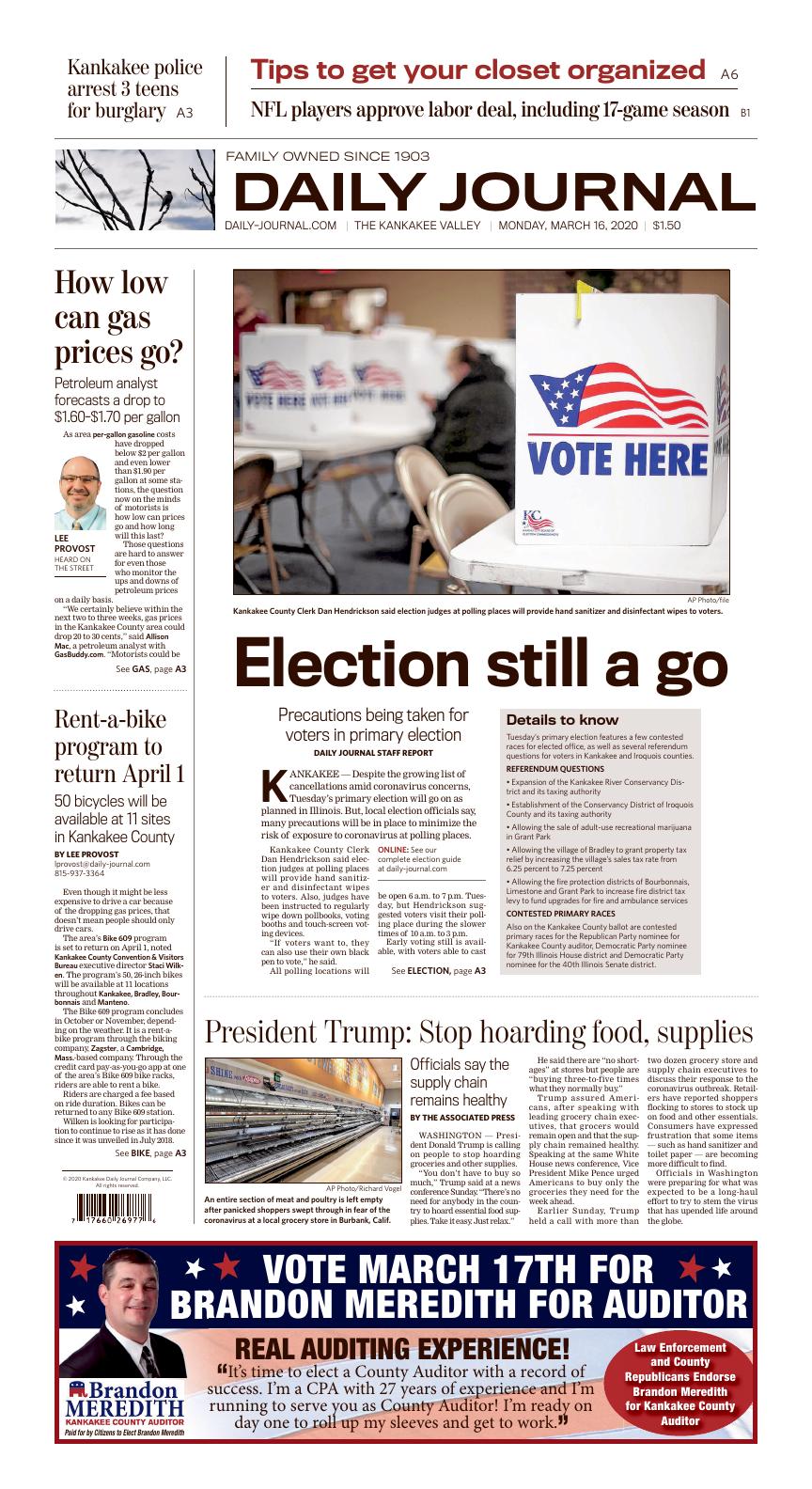 KANKAKEE — Despite the growing list of cancellations amid coronavirus concerns, Tuesday’s primary election will go on as planned in Illinois. But, local election officials say, many precautions will be in place to minimize the risk of exposure to coronavirus at polling places.

“If voters want to, they can also use their own black pen to vote,” he said.

All polling locations will be open 6 a.m. to 7 p.m. Tuesday, but Hendrickson suggested voters visit their polling place during the slower times of 10 a.m. to 3 p.m.

“I’m sure COVID-19 is a factor, but won’t know for sure until we see the numbers on Tuesday,” Hendrickson said.

• Expansion of the Kankakee River Conservancy District and its taxing authority

• Allowing the sale of adult-use recreational marijuana in Grant Park

• Allowing the Village of Bradley to grant property tax relief by increasing the village's sales tax rate from 6.25 percent to 7.25 percent

President Donald Trump speaks during a briefing about the coronavirus in the James Brady Press Briefing Room of the White House, Sunday, March 15, 2020, in Washington.

Dr. Anthony Fauci, director of the National Institute of Allergy and Infectious Diseases, speaks during a briefing on coronavirus in the Brady press briefing room at the White House, Saturday, March 14, 2020, in Washington.

Dr. Anthony Fauci, director of the National Institute of Allergy and Infectious Diseases, listens during a briefing on coronavirus in the Brady press briefing room at the White House, Saturday, March 14, 2020, in Washington.

An entire section of meat and poultry is left empty after panicked shoppers swept through in fear of the coronavirus at a local grocery store in Burbank, Calif. on Saturday, March 14, 2020. Californians wanting to escape the new reality of the coronavirus at the movies, casino or amusement park are running into the six foot rule. State health officials issued new guidance Saturday urging theaters to keep attendance under 250 people and ask strangers to sit six feet apart.

A notice limiting only 3 packages of toilet paper per customer is displayed on picked bare shelves after shoppers cleaned out the stock of paper and cleaning products at a local grocery store in Burbank, Calif. on Saturday, March 14, 2020. Californians wanting to escape the new reality of the coronavirus at the movies, casino or amusement park are running into the six foot rule. State health officials issued new guidance Saturday urging theaters to keep attendance under 250 people and ask strangers to sit six feet apart.

FILE - In this Saturday, March 14, 2020 file photo, travelers wait to check in their luggage at the Los Angeles International Airport. The coronavirus pandemic that's caused many Americans to avoid airports has others booking spur-of-the moment trips at dirt-cheap ticket prices.

Zhili Sun, practices tai chi under a blooming cherry tree while wearing a mask, Sunday, March 15, 2020, along the tidal basin in Washington. Sun, who is from China, says he was visiting his son in the U.S. when COVID-19 struck and has been unable to get home.

Marines from Joint Base Myer-Henderson Hall, run past cherry trees, some of which have begun to bloom, along the Tidal Basin at East Potomac Park, Friday, March 13, 2020, in Washington.

WASHINGTON — President Donald Trump is calling on people to stop hoarding groceries and other supplies.

“You don’t have to buy so much,” Trump said at a news conference Sunday. “There’s no need for anybody in the country to hoard essential food supplies. Take it easy. Just relax.”

He said there are “no shortages” at stores but people are “buying three-to-five times what they normally buy.”

Trump assured Americans, after speaking with leading grocery chain executives, that grocers would remain open and that the supply chain remained healthy. Speaking at the same White House news conference, Vice President Mike Pence urged Americans to buy only the groceries they need for the week ahead.

Earlier Sunday, Trump held a call with more than two dozen grocery store and supply chain executives to discuss their response to the coronavirus outbreak. Retailers have reported shoppers flocking to stores to stock up on food and other essentials. Consumers have expressed frustration that some items — such as hand sanitizer and toilet paper — are becoming more difficult to find.

Officials in Washington were preparing for what was expected to be a long-haul effort to try to stem the virus that has upended life around the globe.

Gas prices dropped below $2 a gallon at many Kankakee area stations Thursday and are projected to drop another 20 to 30 cents.

Gas prices dropped below $2 a gallon at many Kankakee area stations last week and are projected to drop another 20 to 30 cents.

As area per-gallon gasoline costs have dropped below $2 per gallon and even lower than $1.90 per gallon at some stations, the question now on the minds of motorists is how low can prices go and how long will this last?

Those questions are hard to answer for even those who monitor the ups and downs of petroleum prices on a daily basis.

“We certainly believe within the next two to three weeks, gas prices in the Kankakee County area could drop 20 to 30 cents,” said Allison Mac, a petroleum analyst with GasBuddy.com. “Motorists could be seeing prices in the $1.60 to $1.70 a gallon range.”

Prices have not been this low in the Kankakee County market since February 2016, Mac noted.

The plunging prices are, of course, a direct result of the coronavirus and the impact it is having on business and industry. The second major factor is the oil price war taking place between Russia and Saudi Arabia.

Per-barrel oil has dropped to $32 a barrel, nearly a 50 percent drop from the January average crude price of $63.82.

“This is very much unprecedented. We never foresaw the coronavirus affecting developed countries — like Italy, Germany and U.S. In China, the people are not consuming oil. People are staying home,” Mac said.

With prices falling so rapidly and so dramatically, Mac advises motorists not to fill up their gas tanks. Instead, she said, only put in a half-tank so future price drops can be taken advantage of.

“The market is so volatile. We now look at the market as pre-coronavirus and post-coronavirus,” she said.

So how long will these depressed prices remain? That question is hard for anyone to answer, but Mac believes for at least the next few months.

She also believes foreign travel will be down this summer, so perhaps domestic travel will increase, so lower gas prices could spur summertime travel.

Stay tuned. These are unprecedented times.

Even though it might be less expensive to drive a car because of the dropping gas prices, that doesn’t mean people should only drive cars.

The Bike 609 program concludes in October or November, depending on the weather. It is a rent-a-bike program through the biking company, Zagster, a Cambridge, Mass.-based company. Through the credit card pay-as-you-go app at one of the area’s Bike 609 bike racks, riders are able to rent a bike.

Riders are charged a fee based on ride duration. Bikes can be returned to any Bike 609 station.

Wilken is looking for participation to continue to rise as it has done since it was unveiled in July 2018.

Wilken noted that last year the program had 1,464 total users and a total of 2,492 trips taken. Though data collected by Wilken, the program resulted in 628 fewer vehicle miles being driven.

Interestingly, women used the bikes more — 62 percent of bike riders versus 38 percent. The largest age group of were people ages 18 to 34.

In addition, the median trip duration was 40 minutes and the average trip distance was 2 miles.

“These biking programs are not money makers. It’s about reducing traffic, better health and less wear and tear on our roads,” he said.

Simmons said there will be naysayers to programs like this. He expects participation to grow as the program gains a greater hold within the community.

“If this tradition continues, there is potential for some very cool things. Human beings are impatient. At first things look foreign and odd, but they become more the norm as time goes on. Before you know it, the opposition goes away.”

Wilken is hopeful the Bike 609 program will grow to other county towns.

“We’re definitely open to anyone who’s open to Bike 609,” she said. 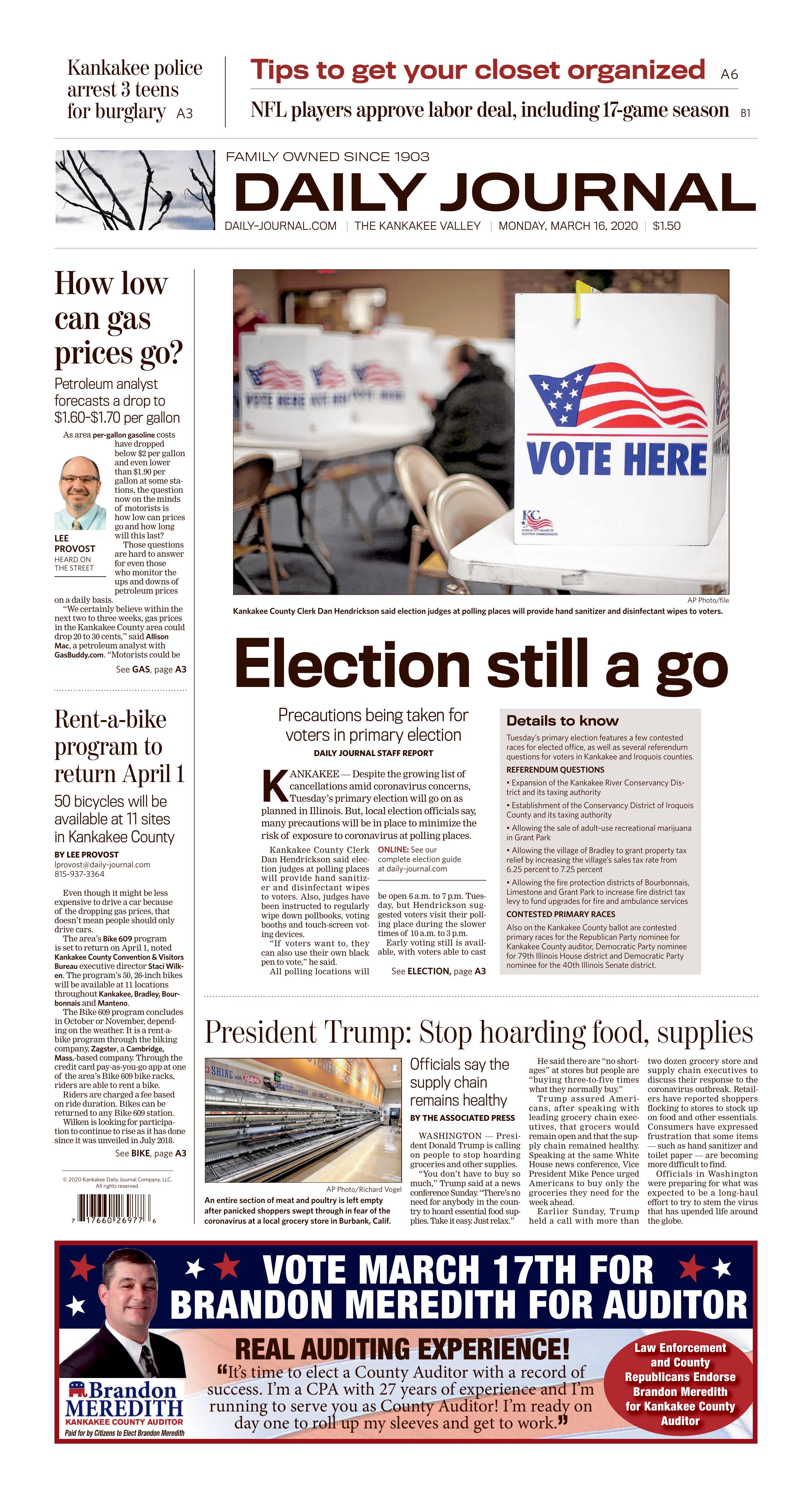