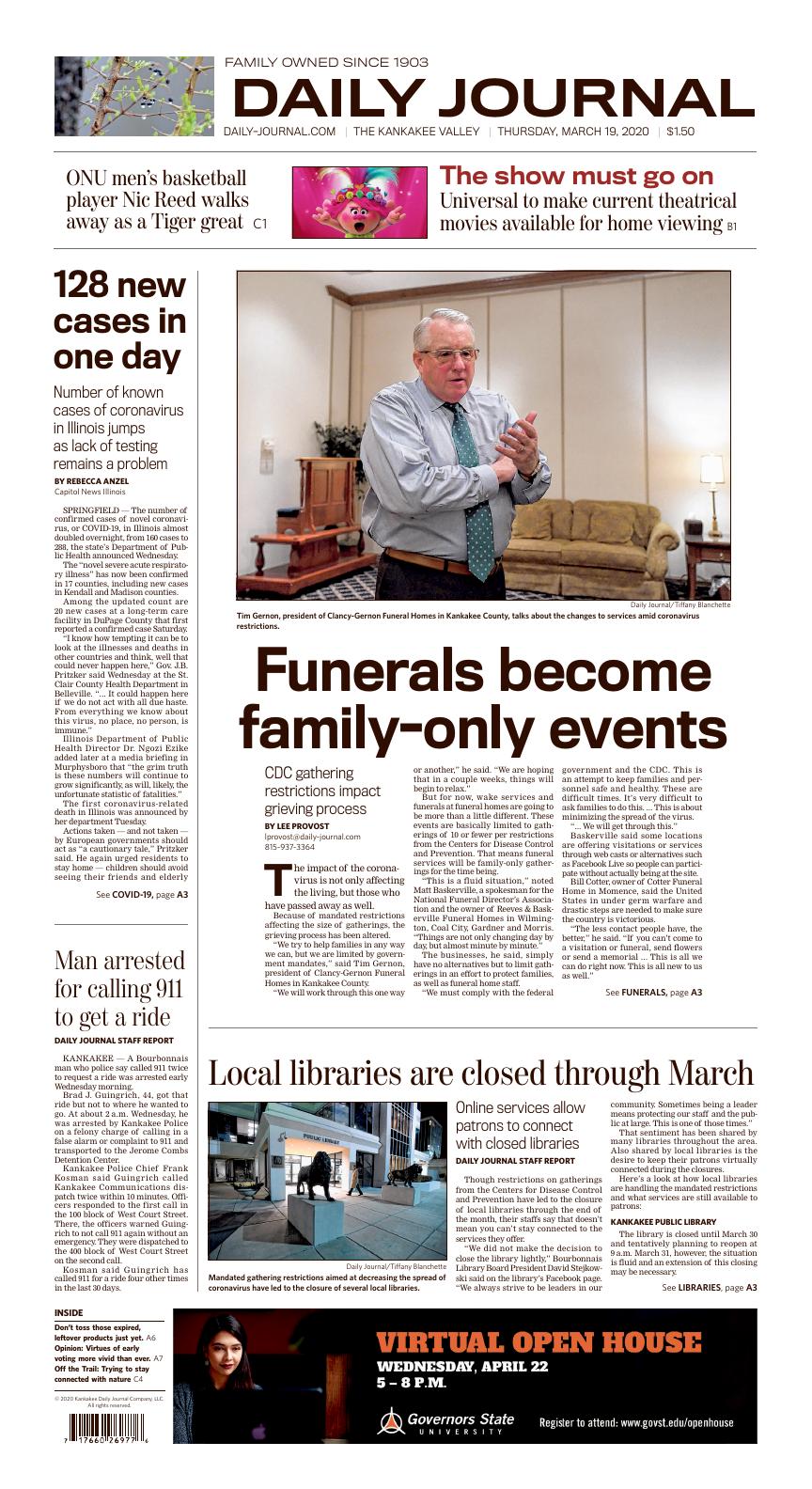 Tim Gernon, president of Clancy-Gernon Funeral Homes in Kankakee County, talks about the changes to services amid coronavirus restrictions.

Due to restrictions regarding gatherings of people, the grieving process at funeral homes has been altered.

The impact of the coronavirus is not only affecting the living, but those who have passed away as well.

Because of mandated restrictions affecting the size of gatherings, the grieving process has been altered.

“We try to help families in any way we can, but we are limited by government mandates,” said Tim Gernon, president of Clancy-Gernon Funeral Homes in Kankakee County.

“We will work through this one way or another,” he said. “We are hoping that in a couple weeks, things will begin to relax.”

But for now, wake services and funerals at funeral homes are going to be more than a little different. These events are basically limited to gatherings of 10 or fewer per restrictions from the Centers for Disease Control and Prevention. That means funeral services will be family-only gatherings for the time being.

“This is a fluid situation,” noted Matt Baskerville, a spokesman for the National Funeral Director’s Association and the owner of Reeves & Baskerville Funeral Homes in Wilmington, Coal City, Gardner and Morris. “Things are not only changing day by day, but almost minute by minute.”

The businesses, he said, simply have no alternatives but to limit gatherings in an effort to protect families, as well as funeral home staff.

“We must comply with the federal government and the CDC. This is an attempt to keep families and personnel safe and healthy. These are difficult times. It’s very difficult to ask families to do this. ... This is about minimizing the spread of the virus.

Baskerville said some locations are offering visitations or services through web casts or alternatives such as Facebook Live so people can participate without actually being at the site.

Bill Cotter, owner of Cotter Funeral Home in Momence, said the United States in under germ warfare and drastic steps are needed to make sure the country is victorious.

“The less contact people have, the better,” he said. “If you can’t come to a visitation or funeral, send flowers or send a memorial ... This is all we can do right now. This is all new to us as well.”

Per the CDC and federal guidelines, Clancy-Gernon has posted a notice stating all gatherings of 10 or more will be canceled, and/or only conducted with a limit of 10 or fewer people. Viewings will only be conducted on bodies that have been embalmed and will only be permissive with 10 or fewer.

In addition, graveside services will be private and conducted with 10 or fewer people.

Gernon said memorial services can be planned for later dates to allow for larger gatherings once coronavirus concerns have passed.

“We’re working our way through this and giving the families what they need,” he said. “We try to help the families in any way we can, but we are limited by government mandates.”

Gernon and Cotter said while these are very concerning times, the community will get through this.

“Maybe in a couple weeks things will start to relax,” Gernon said.

Funeral homes, unlike many other businesses, simply cannot close their doors.

“But we have to be aware of the public good. ... We are in unchartered territory. We are all going to try to do what we can to best serve the people. These are extraordinary circumstances for all of us.”

Mandated gathering restrictions aimed at decreasing the spread of coronavirus have led to the closure of several local libraries.

Though restrictions on gatherings from the Centers for Disease Control and Prevention have led to the closure of local libraries through the end of the month, their staffs say that doesn’t mean you can’t stay connected to the services they offer.

“We did not make the decision to close the library lightly,” Bourbonnais Library Board President David Stejkowski said on the library’s Facebook page. “We always strive to be leaders in our community. Sometimes being a leader means protecting our staff and the public at large. This is one of those times.”

That sentiment has been shared by many libraries throughout the area. Also shared by local libraries is the desire to keep their patrons virtually connected during the closures.

Here’s a look at how local libraries are handling the mandated restrictions and what services are still available to patrons:

The library is closed until March 30 and tentatively planning to reopen at 9 a.m. March 31, however, the situation is fluid and an extension of this closing may be necessary.

For those who have materials currently checked out, fines will not be incurred. Renewals will be automatic and the materials can be returned upon reopening of the library.

All programming, meetings and rentals are postponed during the closing period.

While closed, the library will continue to offer several services via its website that can be accessed with a Kankakee Public Library card. Kanopy provides free TV shows and movies for kids and adults. Overdrive and eRead allow patrons to check out digital books.

The library will be closed until March 31, with staff hoping for an April 1 re-opening. Due dates for all checked-out materials has been extended to April 7.

You will still be able to check out ebooks through dlil.overdrive.com.

No fines will be charged on checked-out materials while the library remains closed until March 31.

The library is closed through March 31, and all library programs have been suspended till further notice.

All items due for return should be deposited in the outside book drop on the south side of the building. Due dates for print and non-print materials have been extended to May 1.

Digital collections are still available to patrons through Overdrive and Axis 360.

The library is closed until March 30 and all events have been canceled. The library has asked its patrons to not return items to the dropbox, saying any late fees will be waived.

The library’s public Wi-Fi will continue to be operational and it is accessible from the street. Anyone in need of internet access is encouraged to use it.

There is a collection of eBooks and audiobooks available through the library’s Axis360 app. Instructions for use are at momencelibrary.org.

The library is closed until further notice, but you can limestonelibrary.org for e-resources.

They will stop all charging of overdue fines and waive existing fines. All due dates have been extended through April 7

The district is closed through March 31 and tentatively set to reopen on April 1.

The Peotone and Monee book drops are open for returns, but due dates will be extended until April 7 and no fines will be accrued.

Go to the resources page on peotonelibrary.org to download or stream books, audiobooks, magazines and movies.

The library is closed through March 30 and all library programs and meeting room bookings are canceled. If you have items checked out, the due dates will be extended until the library reopens. All fines accrued during this time will be waived. Go to www.ccld.org/ for online resources.

The library is closed through March 31 and due dates of checked-out materials are now May 1.

The library is closed through March 30 and plans to reopen March 31.

SPRINGFIELD — The number of confirmed cases of novel coronavirus, or COVID-19, in Illinois almost doubled overnight, from 160 cases to 288, the state’s Department of Public Health announced Wednesday.

The “novel severe acute respiratory illness” has now been confirmed in 17 counties, including new cases in Kendall and Madison counties.

Among the updated count are 20 new cases at a long-term care facility in DuPage County that first reported a confirmed case Saturday.

“I know how tempting it can be to look at the illnesses and deaths in other countries and think, well that could never happen here,” Gov. J.B. Pritzker said Wednesday at the St. Clair County Health Department in Belleville. “... It could happen here if we do not act with all due haste. From everything we know about this virus, no place, no person, is immune.”

Illinois Department of Public Health Director Dr. Ngozi Ezike added later at a media briefing in Murphysboro that “the grim truth is these numbers will continue to grow significantly, as will, likely, the unfortunate statistic of fatalities.”

The first coronavirus-related death in Illinois was announced by her department Tuesday.

Actions taken — and not taken — by European governments should act as “a cautionary tale,” Pritzker said. He again urged residents to stay home — children should avoid seeing their friends and elderly individuals should ask neighbors for help securing supplies instead of venturing to stores themselves.

The governor said he knows the coronavirus is “taking a toll on everyone,” and he is working to provide those most affected with assistance.

“This coronavirus is damaging people in a variety of ways — their health, their safety and their livelihoods — and so we want to do everything we can to minimize that damage,” Pritzker said at the Murphysboro briefing.

He said he has called up 60 National Guardsmen to assist with delivering meals to children out of school, asked the federal government to ensure health care is extended to those who might not have it, opened applications for those who need unemployment security, organized with sheriffs across the state to halt evictions during the state of emergency, and established utilities will not shut off service to those unable to pay.

The “biggest challenge we’ve faced so far,” Pritzker added, is lack of testing. The root of the issue was the federal government’s decision to engineer its own COVID-19 test as opposed to using the one created by the World Health Organization.

Pritzker said he has spoken to leaders of pharmaceutical companies to put Illinois “a little bit ahead of the line” in procuring supplies needed for testing, but, he added, supplies have thus far “mostly been monopolized” by the federal government.

Ezike said the state has the capacity to test 60 to 100 samples per day, but with the ongoing deficiency of tests, “it will take every single one of us making every sacrifice that we can to reduce this virus.”

Illinois State Police Director Brendan Kelly said in Belleville that law enforcement personnel across the state are prepared to enforce the order for restaurants and bars to remain closed to dine-in customers. Failure to do so qualifies as a misdemeanor.

Kelly also said state police are operating as they do during a severe winter storm — officers are focusing on calls for assistance and preparing to secure medical facilities as needed. Investigations of violent crimes are continuing, with interviews conducted largely over the phone. He added emergency calls reporting crimes in progress have decreased in recent days.

Illinois launched another online resource for residents looking to learn about COVID-19 cases, preparation tips, or in need of other resources: www.coronavirus.illinois.gov.

The Public Health Department’s statewide hotline is 1-800-889-3931, and its related email address for questions is dph.sick@illinois.gov.

Brad J. Guingrich, 44, got that ride but not to where he wanted to go. At about 2 a.m. Wednesday, he was arrested by Kankakee Police on a felony charge of calling in a false alarm or complaint to 911 and transported to the Jerome Combs Detention Center.

Kankakee Police Chief Frank Kosman said Guingrich called Kankakee Communications dispatch twice within 10 minutes. Officers responded to the first call in the 100 block of West Court Street. There, the officers warned Guingrich to not call 911 again without an emergency. They were dispatched to the 400 block of West Court Street on the second call.

Kosman said Guingrich has called 911 for a ride four other times in the last 30 days. 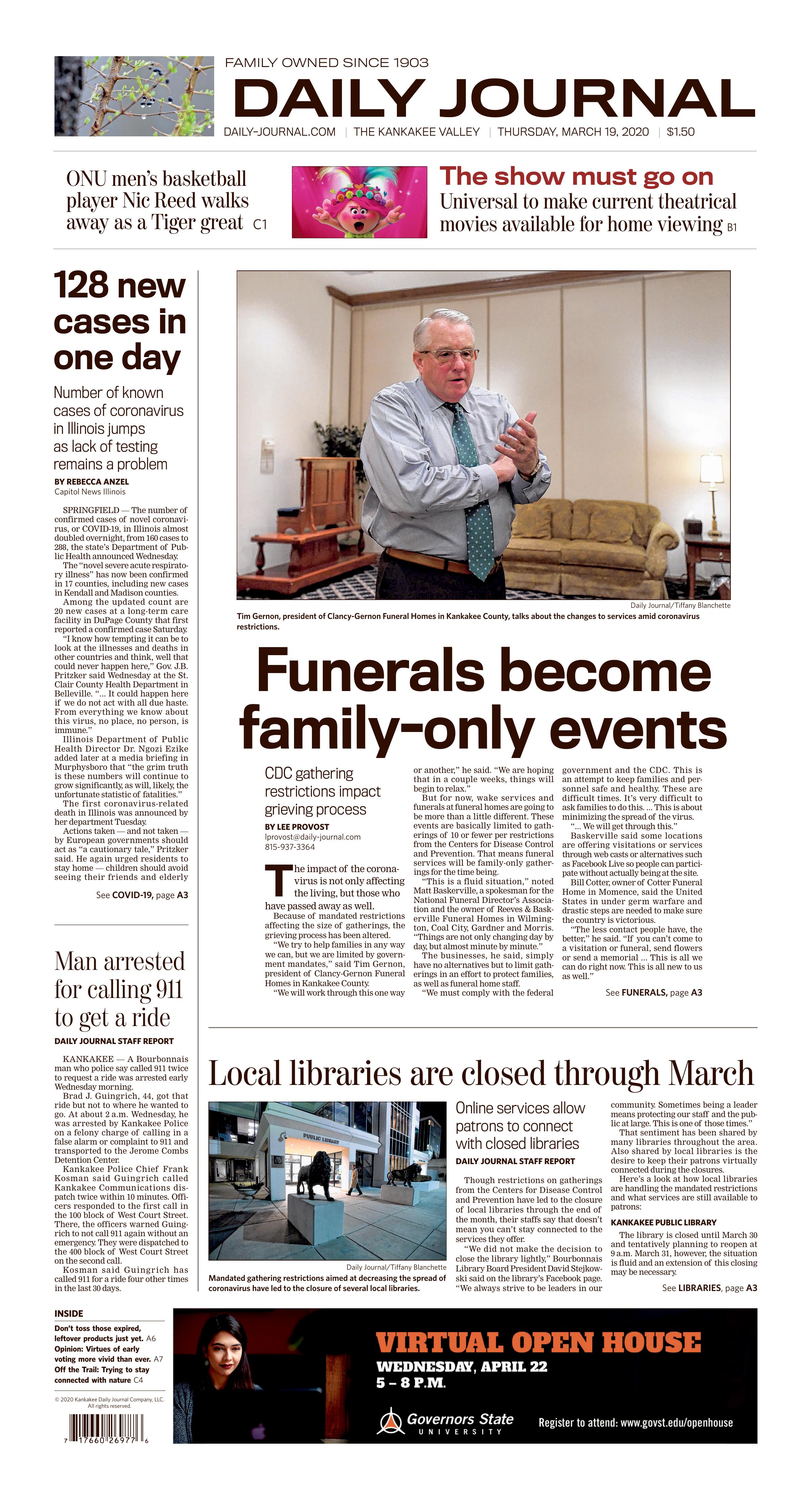