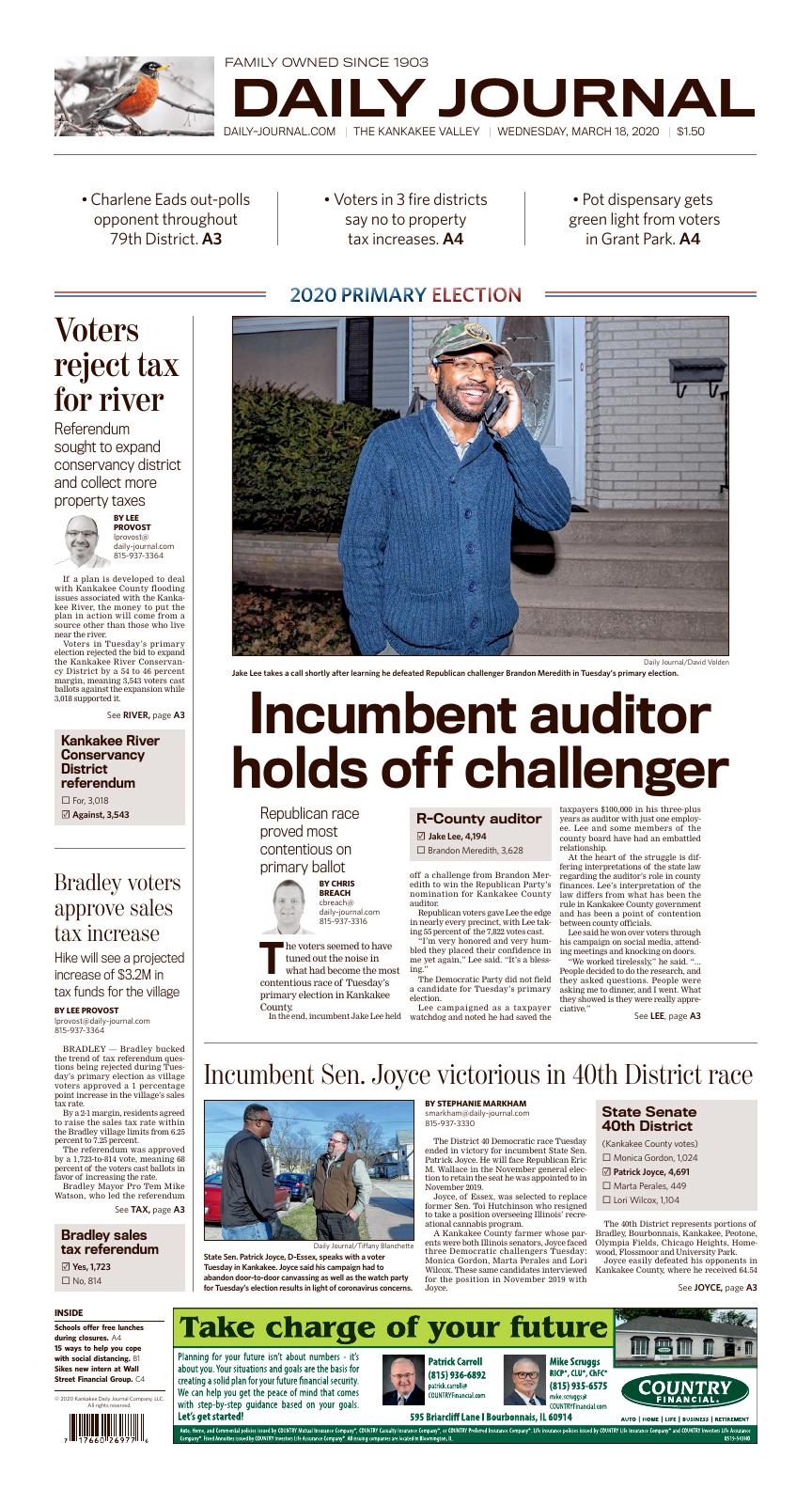 Brandon Meredith participates in a candidate forum during his campaign for the GOP nomination for Kankakee County auditor. He lost his bid to Jake Lee.

The voters seemed to have tuned out the noise in what had become the most contentious race of Tuesday’s primary election in Kankakee County.

In the end, incumbent Jake Lee held off a challenge from Brandon Meredith to win the Republican Party’s nomination for Kankakee County auditor.

Republican voters gave Lee the edge in nearly every precinct, with Lee taking 55 percent of the 7,822 votes cast.

“I’m very honored and very humbled they placed their confidence in me yet again,” Lee said. “It’s a blessing.”

The Democratic Party did not field a candidate for Tuesday’s primary election.

Lee campaigned as a taxpayer watchdog and noted he had saved the taxpayers $100,000 in his three-plus years as auditor with just one employee. Lee and some members of the county board have had an embattled relationship.

At the heart of the struggle is differing interpretations of the state law regarding the auditor’s role in county finances. Lee’s interpretation of the law differs from what has been the rule in Kankakee County government and has been a point of contention between county officials.

Lee said he won over voters through his campaign on social media, attending meetings and knocking on doors.

“We worked tirelessly,” he said. “... People decided to do the research, and they asked questions. People were asking me to dinner, and I went. What they showed is they were really appreciative.”

Lee said he worked as hard on this campaign as he did the first time he ran for the office three years ago.

“I didn’t discount my opponent,” Lee said. “He was very qualified for the job. I did all that I could do and stood for what I’ve accomplished. They decided to give me another shot.”

Meredith campaigned hard, saying he was the better choice to do the job and would have a better working relationship with the county board. Many board members expressed their support for Meredith during his campaign.

“That’s the best I could do,” Meredith said when reached by phone after the results were tallied. “I wish I would’ve had more time to focus on the race. I’ll lick my wounds and find out what I did wrong.”

He said he hopes people put their personal aspirations aside and work together.

“It took someone like me to come off the sidelines and bring this to the forefront,” Meredith said. “If I could find a silver lining, that would be it. We’re all on the same team. Let’s get it figured out for the county.”

State Sen. Patrick Joyce, D-Essex, speaks with a voter Tuesday in Kankakee. Joyce said his campaign had to abandon door-to-door canvassing as well as the watch party for Tuesday’s election results in light of coronavirus concerns.

The District 40 Democratic race Tuesday ended in victory for incumbent State Sen. Patrick Joyce. He will face Republican Eric M. Wallace in the November general election to retain the seat he was appointed to in November 2019.

“It’s paramount that we get some sort of plan [for the Kankakee River],” he said. “It’s something that’s been going on for 40 years. Indiana is starting to step up to the plate a little bit on their share, and it’s something that I want our state and our county to do their share.”

Joyce said he was relieved to reach the conclusion of his primary campaign, as his schedule has been packed for several months in preparation for Tuesday’s primary election.

Joyce said voter turnout seemed low when he visited polling sites in the 40th District, as many would-be voters stayed home due to coronavirus concerns.

“It depends on what’s on the ballot also,” he said. “It seems like Kankakee was a little lower, and Bradley, maybe because of the referendum, seemed a little higher, but it’s a little all-over-the-board.”

Gordon, of Flossmoor, said early Tuesday that she expected to finish strong in the race, but the quietness heard at polling locations was worrisome.

“I do think that’s an advantage for the incumbent, a low turnout,” she said. “So that’s very concerning to me.”

Gordon said she is proud of the work she and her team did for her first campaign, and she encourages anyone who believes they can make a significant change to “go for it.”

“I wouldn’t trade this experience for anything,” she said. “It was very challenging, there were ups and there were downs, but it was a very unique experience that I will always treasure.”

Perales, a former legislative affairs director for Metra, and Wilcox, City Clerk of Chicago Heights, could not be reached for comment Tuesday.

Voters in Tuesday's primary election rejected the bid to expand the Kankakee River Conservancy District by a 54 to 46 percent margin.

If a plan is developed to deal with Kankakee County flooding issues associated with the Kankakee River, the money to put the plan in action will come from a source other than those who live near the river.

Voters in Tuesday’s primary election rejected the bid to expand the Kankakee River Conservancy District by a 54 to 46 percent margin, meaning 3,543 voters cast ballots against the expansion while 3,018 supported it.

If approved, the property tax would have cost residents within the expanded district about $24 annually on a house valued at $100,000. The ballot question was put forth to residents who mainly live within 1 to 2 miles of the river.

The referendum was not an initiative of the Kankakee County Board, although board chairman Andy Wheeler was among those who served as spokespersons for the referendum which was pursued by a citizens’ group.

“It’s the democratic process,” said Wheeler, who had helped organize and lead the effort to expand the taxing district across Kankakee County. “People voted and said what they wanted. They do not want to address the river in the way it was presented to them.”

Flooding along the river banks has been a growing concern for many years as areas flood at a greater rate than they have in the past. However, that reality did not seem to propel voters to support the funding mechanism that was projected to raise about $450,000 a year.

“I understand,” Wheeler said only moments after the fate of the referendum was sealed. “No one wants their taxes raised. But the river is our biggest asset. This river defines us all. I failed the community in my opinion. I was not able to get people to see the value in this. I will continue to look for ways to solve this problem. But there are still no funds to address what we want to do locally. That’s disappointing to me.”

The money generated by the tax would have been mainly used as matching funds for federal or state grants. Without matching funds, Kankakee County might not be in play for any significant funding streams.

Only days prior to Tuesday’s election, a series of three town hall meetings was held in Kankakee, Momence and Aroma Park to help answer voters’ questions and gain more support for the proposal.

“I thought people would stand up and say this is the time for us to do this,” Wheeler added. “This was our shot. What are we doing to solve this problem and meet this challenge?”

By a 2-1 margin, residents agreed to raise the sales tax rate within the Bradley village limits from 6.25 percent to 7.25 percent.

The referendum was approved by a 1,723-to-814 vote, meaning 68 percent of the voters cast ballots in favor of increasing the rate.

Bradley Mayor Pro Tem Mike Watson, who led the referendum push, said the successful vote is a credit to those within the village government who were able to get the message out to residents.

The increased rate is projected to raise the amount of village sales tax from $7.3 million to $10.5 million.

About $2 million of the new revenue will be returned to Bradley property owners in the form of a property tax rebate.

The bulk of the remainder will be dedicated to the Bradley Fire Department. The village has had significant discussions of constructing a second fire station — this one on the village’s north side — and increasing fire department staffing levels. Some funds will also go toward repairing village infrastructure.

Watson thanked village board members for being bold enough to put this referendum out to the voters when many would rather hide from such issues.

“They are not afraid to make a common-sense call,” he said. “We’ve got a village to fix. This referendum is not a cure-all, but it’s start to see some things happening.” 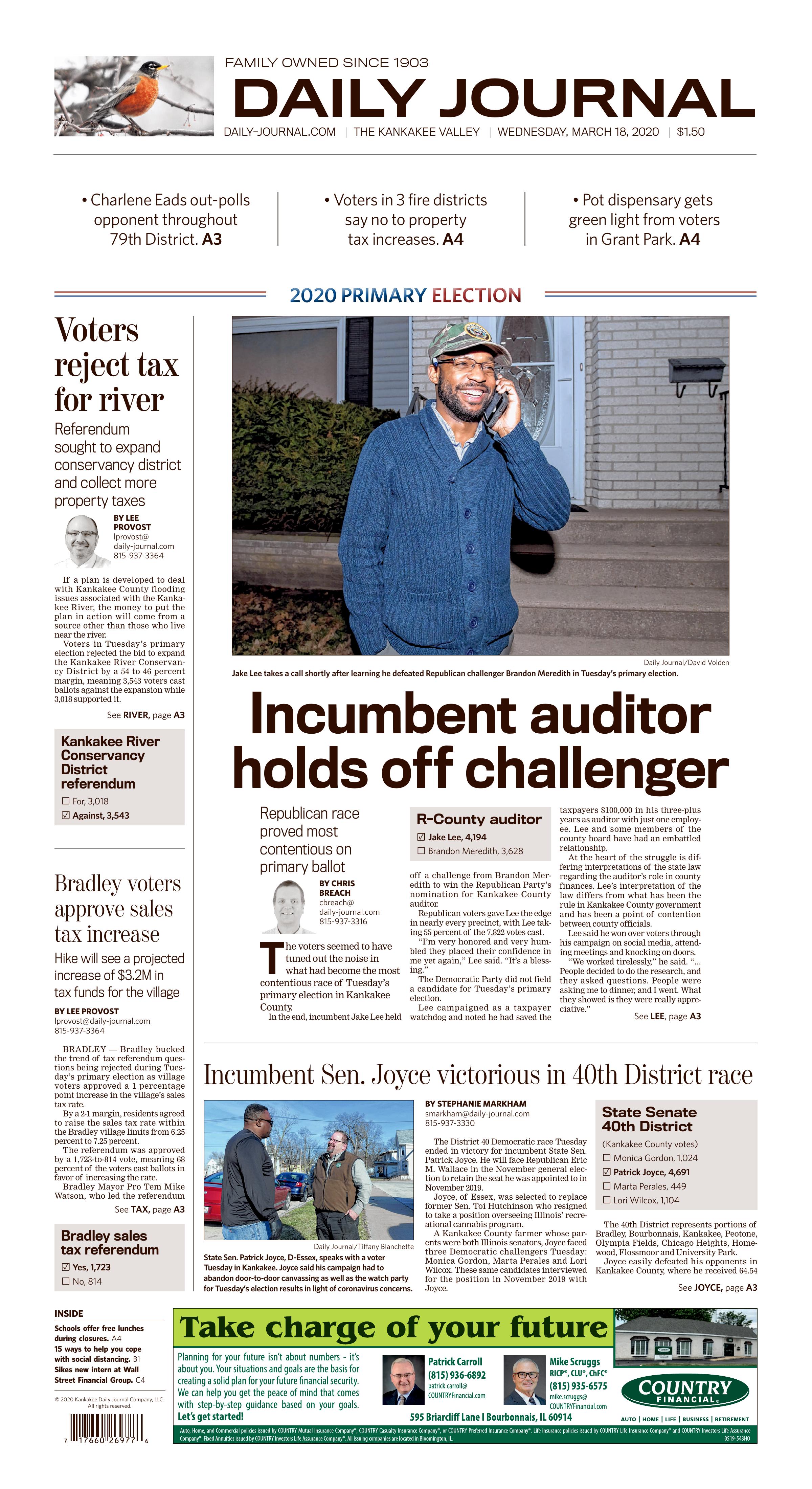