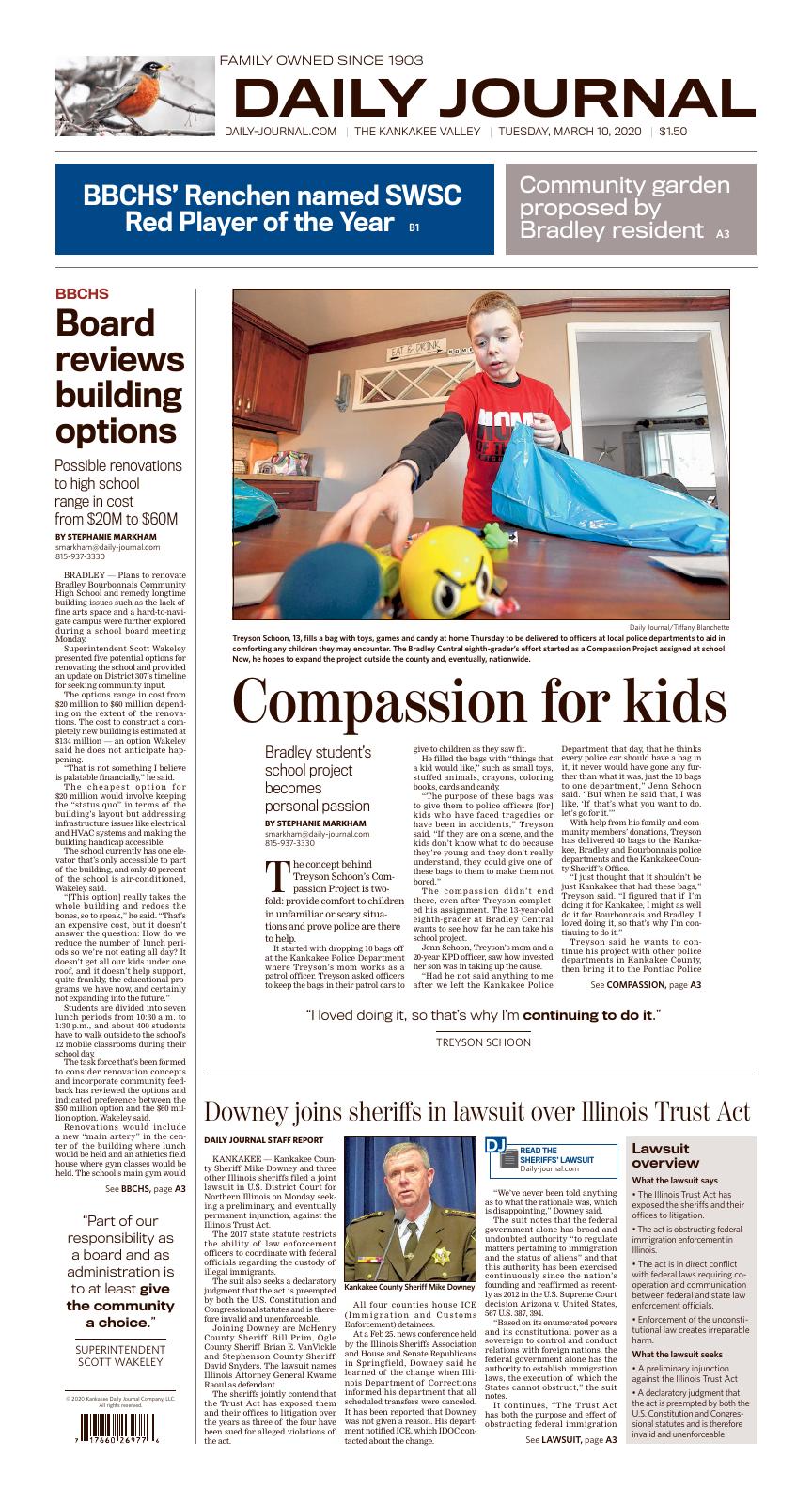 Treyson Schoon, 13, fills a bag with toys, games and candy at home Thursday to be delivered to officers at local police departments to aid in comforting any children they may encounter. The Bradley Central eighth-grader’s effort started as a Compassion Project assigned at school. Now, he hopes to expand the project outside the county and, eventually, nationwide.

BRADLEY — The concept behind Treyson Schoon’s Compassion Project is two-fold: provide comfort to children in unfamiliar or scary situations and prove police are there to help.

It started with dropping 10 bags off at the Kankakee Police Department where Treyson’s mom works as a patrol officer. Treyson asked officers to keep the bags in their patrol cars to give to children as they saw fit.

He filled the bags with “things that a kid would like,” such as small toys, stuffed animals, crayons, coloring books, cards and candy.

“The purpose of these bags was to give them to police officers [for] kids who have faced tragedies or have been in accidents,” Treyson said. “If they are on a scene, and the kids don’t know what to do because they’re young and they don’t really understand, they could give one of these bags to them to make them not bored.”

The compassion didn’t end there, even after Treyson completed his assignment. The 13-year-old eighth-grader at Bradley Central wants to see how far he can take his school project.

Jenn Schoon, Treyson’s mom and a 20-year KPD officer, saw how invested her son was in taking up the cause.

“Had he not said anything to me after we left the Kankakee Police Department that day, that he thinks every police car should have a bag in it, it never would have gone any further than what it was, just the 10 bags to one department,” Jenn Schoon said. “But when he said that, I was like, ‘If that’s what you want to do, let’s go for it.’”

With help from his family and community members’ donations, Treyson has delivered 40 bags to the Kankakee, Bradley and Bourbonnais police departments and the Kankakee County Sheriff’s Office.

“I just thought that it shouldn’t be just Kankakee that had these bags,” Treyson said. “I figured that if I’m doing it for Kankakee, I might as well do it for Bourbonnais and Bradley; I loved doing it, so that’s why I’m continuing to do it.”

Treyson said he wants to continue his project with other police departments in Kankakee County, then bring it to the Pontiac Police Department in Livingston County where his brother lives and to the Illinois State Police.

“Honestly, [my goal is to] maybe one day make this worldwide where we could ship out to other countries or maybe other places in the United States, just to make this as big as possible,” Treyson said.

While Treyson knew he could count on his family to help him expand his project’s reach, he never predicted the outpouring of support from the community.

Treyson’s older brother Trevor set up a GoFundMe page that has since raised nearly $1,500. Trevor also helped him get in touch with local news outlets, and word of the project continued to spread.

Jenn Schoon set up a Facebook fundraiser to seek further donations; it has since raised over $2,000. Others have given the family cash donations or sent Treyson items through his Amazon wishlist.

Taco John’s in Bradley has agreed to donate 50 percent of its proceeds from customers who mention the Compassion Project from 4 to 7 p.m. March 18.

He said he asked students to spend part of their class time working to help a group of people or solve a problem of their choice.

“In school, students don’t always have the opportunity to direct their own learning,” Schouten said. “I could assign them a problem, but I want them to pick something they care about.”

Students selected projects like collecting food for the homeless, making toys for animal shelters and starting an anti-bullying campaign, he said.

“I was not surprised to see [Treyson] come up with a project like this to help as many people as possible,” Schouten said. “It fits with his character.”

Treyson said he was thinking of a way he could help police when he thought of the idea to make the bags for children. He said he hopes his project helps highlight the good police do and improve trust between police and young people.

“I figured giving these to the police officers to give to the kids would be a way in helping them out and helping kids not to be scared or frightened when police are around,” he said.

Bradley Central Principal Mark Kohl said all students did well with the Compassion Project, but Treyson went the extra mile.

“He’s the only one who’s taken his project and really ran with it,” Kohl said. “Treyson is very passionate about everything in life.”

Kohl said he was excited to see all the attention surrounding Treyson’s project, and he hopes the project continues to expand.

“[Treyson] is a very driven young man,” Kohl said. “We are very proud of him.”

"I loved doing it, so that’s why I’m continuing to do it.”

Kankakee County Sheriff Mike Downey joins Republican lawmakers and fellow sheriffs Tuesday at a Capitol news conference to urge Gov. JB Pritzker to repeal a policy that prohibits communication and cooperation with federal, state and local authorities when an undocumented immigrant is released from prison on felony charges.

The 2017 state statute restricts the ability of law enforcement officers to coordinate with federal officials regarding the custody of illegal immigrants.

The suit also seeks a declaratory judgment that the act is preempted by both the U.S. Constitution and Congressional statutes and is therefore invalid and unenforceable.

The sheriffs jointly contend that the Trust Act has exposed them and their offices to litigation over the years as three of the four have been sued for alleged violations of the act.

At a Feb 25. news conference held by the Illinois Sheriffs Association and House and Senate Republicans in Springfield, Downey said he learned of the change when Illinois Department of Corrections informed his department that all scheduled transfers were canceled. It has been reported that Downey was not given a reason. His department notified ICE, which IDOC contacted about the change.

“We’ve never been told anything as to what the rationale was, which is disappointing,” Downey said.

The suit notes that the federal government alone has broad and undoubted authority “to regulate matters pertaining to immigration and the status of aliens” and that this authority has been exercised continuously since the nation’s founding and reaffirmed as recently as 2012 in the U.S. Supreme Court decision Arizona v. United States, 567 U.S. 387, 394.

“Based on its enumerated powers and its constitutional power as a sovereign to control and conduct relations with foreign nations, the federal government alone has the authority to establish immigration laws, the execution of which the States cannot obstruct,” the suit notes.

It continues, “The Trust Act has both the purpose and effect of obstructing federal immigration enforcement in Illinois.”

The majority of the conflict between the Trust Act and federal law revolves around the use of “detainers,” which require local law enforcement officers to maintain custody of an undocumented alien for up to 48 hours to give federal officials time to discover his or her immigration status. Based on their findings, the individual may then be released or turned over to the custody of ICE.

However, the Trust Act bars any law enforcement agency or official from detaining “any individual solely on the basis of any immigration detainer ….”

According to the suit, the net result is the “Trust Act is in direct conflict with federal laws requiring cooperation and communication between federal and state law enforcement officials.” All despite the fact that as the Arizona case decision declares, “Consultation between federal and state officials is an important feature of the immigration system.”

What the lawsuit says

• The Illinois Trust Act has exposed the sheriffs and their offices to litigation.

• The act is obstructing federal immigration enforcement in Illinois.

• The act is in direct conflict with federal laws requiring cooperation and communication between federal and state law enforcement officials.

What the lawsuit seeks

• A preliminary injunction against the Illinois Trust Act

• A declaratory judgment that the act is preempted by both the U.S. Constitution and Congressional statutes and is therefore invalid and unenforceable

Bradley-Bourbonnais Community High School students walk between the main building and a mobile classroom near the west entrance in January 2018. Superintendent Scott Wakeley says the school board has a goal of educating all students under “one roof,’ and that goal plays a key factor in its plan to renovate the facility.

BRADLEY — Plans to renovate Bradley Bourbonnais Community High School and remedy longtime building issues such as the lack of fine arts space and a hard-to-navigate campus were further explored during a school board meeting Monday.

The options range in cost from $20 million to $60 million depending on the extent of the renovations. The cost to construct a completely new building is estimated at $134 million — an option Wakeley said he does not anticipate happening.

“That is not something I believe is palatable financially,” he said.

The cheapest option for $20 million would involve keeping the “status quo” in terms of the building’s layout but addressing infrastructure issues like electrical and HVAC systems and making the building handicap accessible.

The school currently has one elevator that’s only accessible to part of the building, and only 40 percent of the school is air-conditioned, Wakeley said.

“[This option] really takes the whole building and redoes the bones, so to speak,” he said. “That’s an expensive cost, but it doesn’t answer the question: How do we reduce the number of lunch periods so we’re not eating all day? It doesn’t get all our kids under one roof, and it doesn’t help support, quite frankly, the educational programs we have now, and certainly not expanding into the future.”

Students are divided into seven lunch periods from 10:30 a.m. to 1:30 p.m., and about 400 students have to walk outside to the school’s 12 mobile classrooms during their school day.

The task force that’s been formed to consider renovation concepts and incorporate community feedback has reviewed the options and indicated preference between the $50 million option and the $60 million option, Wakeley said.

Renovations would include a new “main artery” in the center of the building where lunch would be held and an athletics field house where gym classes would be held. The school’s main gym would remain while its old gym and north gym spaces would be re-purposed.

Wakeley said the “main artery” better directing students through the school was the key aspect the task force liked from the most expensive option.

“They thought [the main artery] was kind of a linchpin for what we needed to be able to move around,” he said.

“Part of our responsibility as a board and as administration is to at least give the community a choice,” he said.

The school board would have to make a decision on placing a referendum on the November ballot by August, Wakeley said.

“Part of our responsibility as a board and as administration is to at least give the community a choice." 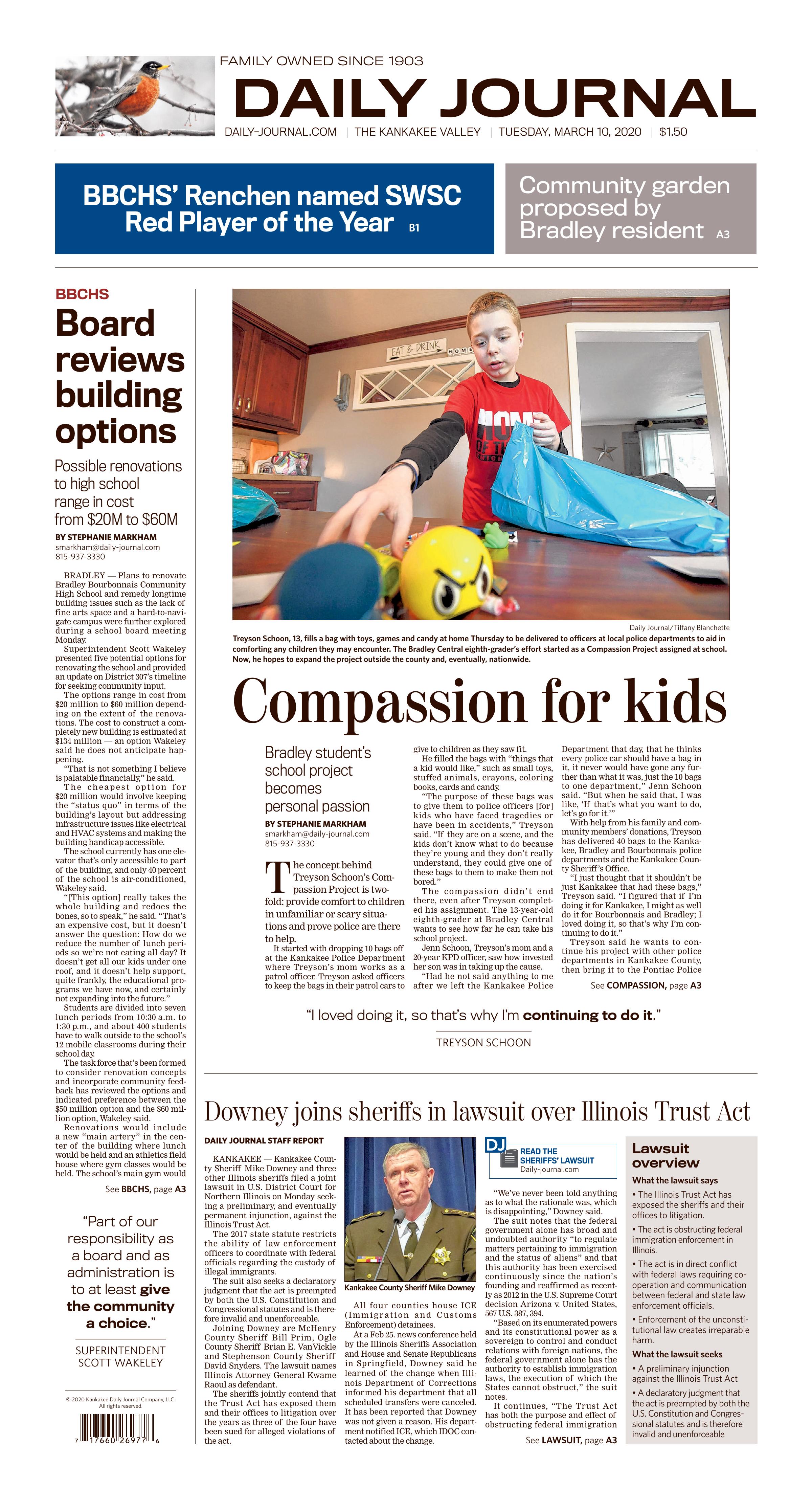